It's easy to confuse Cirque Niagara and their new show Avaia with previous offerings by Cirque du Soleil: after all, they both feature pliable and flexible gymnasts flying across a stage to tell a story of magic and wonderment, and both are a far cry from the three-ring circuses I went to as a child. But unlike the international phenom that is Cirque du Soleil — and the notoriety it has gained by accompanying Celine Dion on stage in Vegas — Cirque Niagara adds a new dimension to their shows other than just inconceivably elastic humans: they've got horses.

Avaia tells the story of a new world civilization living in a mystical harmony with the nature surrounding it, and uses a wide variety of acrobatic performers — including jugglers, gymnasts, knife throwers and contortionists — to bring that story to life on stage. Created by the Kantemirov Family Circus Dynasty, a family that has been doing Russian circus since 1871, Avaia is being billed as a product of European circus royalty and features the best in equestrian craft. 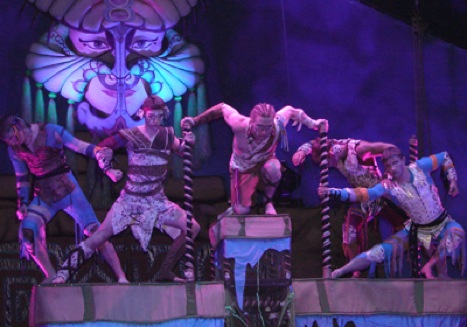 Cirque Niagara's first show in Toronto premiered a week ago at a special tent created for Avaia at the Woodbine Race Track in Rexdale. It has since then received critical acclaim from local and national media, and will be running in Toronto until May 27. Come back next week for a special blogTO review of the Cirque Niagara spectacle.

For more information or to purchase tickets to Avaia, visit the Cirque Niagara website at cirqueniagara.com.