Dementia 5, which celebrated its one year anniversary in Toronto a few months ago, is one event that is almost impossible to describe. Usually a mashup of spoken word, live music, and video, organizers Dave Silverberg and Electric Jon promise only one thing: "your cerebrals won't be the same."

This Friday at the Dominion Pub, however, Dementia 5 takes it up a notch to present Apocalypse Smurf, a multimedia event that will have you turning blue in the face and running around like characters in an animated 1980's commune without shirts. And even that may be underselling the event. This month's show will feature a live video-DJ and a feature by spoken word star Boonaa, as well as performances by a host of other local artists. 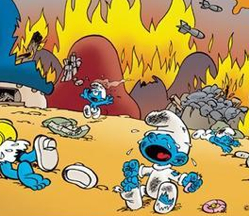 Apocalypse Smurf goes down at the Dominion Pub, 500 Queen Street East, at 8pm this Friday, May 25, 2007. Do be sure to be there, I've heard that there might be a chicken suit involved.