The Cirque Comes to Rexdale

That's about how my response went when my girlfriend phoned and told me that her friend had made us that offer for this past Friday night.

I mean, first of all, Cirque du Soleil is one of the best productions of any kind that I've ever seen, second it's pretty expensive, third I thought tickets were being sold for it last spring and, hey, wait a minute, weren't they planning on being in Toronto, like, last fall or something?

As it turns out, we were playing a bit of broken telephone, with various details being strewn by the wayside.

I was left to pick up the pieces and put them together to figure out what exactly was going on... and what was going on turned out to be Cirque Niagara in a tent at Woodbine racetrack.

The tent was pretty much the same size and shape as Cirque du Soleil had set up at Ontario Place for Varekai, which I got to check out back in 2002. Naturally, I wound up using this as somewhat of a comparison base.

We arrived a few minutes after the show had started, and walked in as a number of the performers were taking turns flinging themselves down a trampoline catwalk. I noticed a few of them just barely pulling off their final landings, with one flying off into a safety mat that a clown was holding.

In many ways, the show was alot like Cirque du Soleil. Segments that required complex equipment setup alternated with humourous clownery. There were lots of things that were markings of Niagara's lower Cirque-status, though, such as the extra safety mats, the ever-present rope lines for any higher-altitude acrobatics, and just the simple fact that they lacked the clockwork-perfect technique.

I let this off easily, though, because comparing just about anything to Cirque du Soleil is setting that thing up to look bad. I had no trouble warming up to the performers and was just as delighted by everything, if struck with a bit less open-mouthed awe.

Some elements of the traditional circus were included, too, such as juggling and knifeplay. As well, after a few segments were performed, I was surprised to see them bring out a number of decorated live horses for a quick trot around the ring.

As you are probably aware, Cirque du Soleil set itself apart from traditional circuses by focussing entirely on human performance and avoiding the use of animals entirely. In the modern era where the presence of a lion or elephant is less likely to shock and amaze and more likely to remind you to renew your Zoo membership, this allowed them to move in the direction of complex feats that only humans could be trained to perform.

This was a great relief to both the animals and the circus animal rights activists, because as cute as the bear in the car may look or as much as lion's ferocity might be magnified by its leap through a ring of fire, the reality is that those animals really don't want to be doing those things and can only be trained to do them with heavy repetition of abusive techniques, making them terrified of misperforming.

The horses that Cirque Niagara brought out seemed like they were doing alright, though, and were just lead around the ring quickly and politely before being directed back out. I was surprised by their presence, but I let it go.

During the intermission, we were sent out into the gift shop area, and I noticed something then that I hadn't on the way in - nearly every product in the place was a horse or had a horse on it. They were really focussing on this horse thing.

Oh, but this was the Woodbine racetrack, I remembered. Perhaps the whole horse bit was just a novelty put together because it was possible this one time? Well, I asked some staff, and no - the horses belonged to the circus and were part of every show.

Through the second half of the show, I found myself increasingly impressed by the performances, in particular the knifeplay. I'd really felt that I'd been won over, having come into the tent expecting a somewhat amateurish night.

Then the real horsing around started. Horses were brought out and ran tight laps around the small ring while performers did various balancing acts on their backs. The thing is, when the first horse came out, so did the man with the whip. 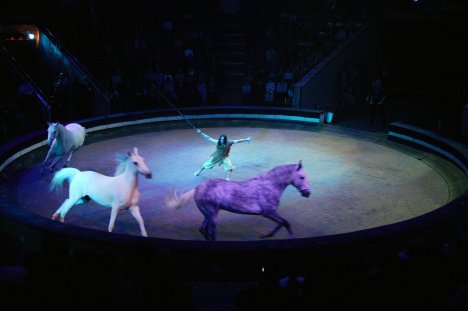 This guy just stood in the centre of the ring with this long whip, turning in circles to ensure he remained in the horse's peripheral vision. The sight of this man clearly terrified the horses, and they ran as fast as they could. Every time they slowed or started to go off-track, he would lift his hand a bit and they'd take off again.

I have a pet dog, Bennie, and my dog spent part of his life between owners as a stray. When we found and adopted him, we discovered that he was a combination of two basic personality types: he was the most friendly and inherently happy dog on the planet, and he was scared of absolutely everyone.

Bennie had clearly been abused - any time a hand was raised in front of him, he would cower down low, even if the hand was only coming to deliver food or a petting. Complete strangers have accused me of abusing him when I take him for walks because they can tell from only a moment's interaction with him that he's been beaten in the past.

Even sitting maybe a dozen rows back from the stage, I could easily tell that these horses were very scared and felt they were in imminent danger. Some cowered their heads in the same way my dog does any time they got near a person, performing the forced part of their actions like a shaking North Vegas stripper with a black eye and busted lip while their instinct managed the rest, constantly working on keeping them from getting hit again.

A person who can co-ordinate and manipulate their body to twist and turn stylistically as they fly through the air and then land not only safely but with perfect timing and lots of class is someone worthy of my respect.

A person who beats an animal until they're so frightened that they'll run forever at the slightest hint of a threat and then decorates that animal and charges a ticket price to see it isn't worthy of anything but my spit, and I generally would rather save myself the salivation energy.

In a few moments, I lost any endearment that I might've had towards the circus and the performers. The minor complaints I'd had with the quality of the performance earlier returned as piles of disrespect towards all the individuals involved, though I decided to write it up as the former rather than the latter.

I anticipated the end eagerly and was glad when it came. I didn't clap when they came out to bow.

Finally, coming home to check the price online, I found that tickets were a fair bit more expensive than I'd expected.

Cirque Niagara is at Woodbine for the rest of May and then heads back to the Falls, but I wouldn't recommend you go see it. Frankly, I think the horses would agree.