I absolutely loved Nuit Blanche, and there were almost a half a million people out there enjoying it along with me, so I don't think I was alone in being ecstatic to learn that it would take place again this year. What I only recently learned, though, was that this "free all-night contemporary art thing" bumped another one of my favourite Toronto events off the map: the Celebrate Toronto Street Festival.

City Councillor Kyle Rae (Ward 27, Toronto Centre-Rosedale) said in an interview with the Star that Celebrate Toronto had "served its purpose and its life expectancy, and there was now a new cultural event that was more dynamic," but his colleague Karen Stintz (Ward 16, Eglinton-Lawrence), complained that the pedestrian-friendly festival deserved a better fate: "We have cut out an extremely important street festival ... and there was no discussion about it."

I have mixed feelings about the news. I loved Celebrate Toronto: one of my favourite memories of the summer of 2005 was drinking beer in Dundas Square while watching eight-metre tall giraffes pick their way through an awestruck crowd. To this day that remains the most innovative and exciting event I've ever seen in the ordinarily bland square. On the other hand, I really loved Nuit Blanche and the way it re-imagined so many familiar public spaces.

I guess I'd expect that in a city that is supposedly Live With Culture there would be room for both festivals. As disappointed as I am, I'm sure there are a lot of families who will be even more disappointed: not everyone is able to stay out until 7 am taking in contemporary art. While Nuit Blanche was (mostly) about subtle installations planted like question marks around downtown, Celebrate Toronto took over the city's most well-known street and turned it into a playground of concerts, circus performances, and unpretentious fun all the way up to North Toronto. 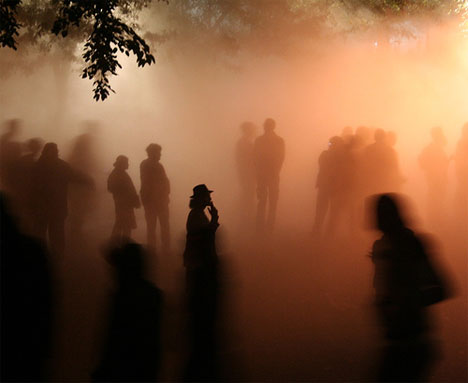 Something else to consider is that Nuit Blanche occurs in many other cities around the world, but Celebrate Toronto only happened here. That was part of what was so special about it. For that reason, Nuit Blanche will never be as much of a point of civic pride as the first festival, and it's a sad loss to accept when it seemed Celebrate Toronto was finally establishing itself as signature summer event.

Mel Lastman didn't leave many positive legacies in Toronto, but Celebrate Toronto was his baby, and in many ways it embodied the ex-mayor we love to hate: it was over-the-top and in-your-face, but strangely charismatic. Say what you will about the man, but he was proud of what (he thought) this city is, and I'll miss his festival.

What do you think? Is this a logical step in the maturation of our city's festivals, or a blow to our civic pride and our sense of fun?

Top image by dzgnboy, middle one by xarq, both from the blogTO Flickr pool.