When the Kodo drummers, an energetic Japanese percussion ensemble, first emerged in the packed concert hall, heralded by the clang of a handheld Atarigane among an array of taiko drums players grasped in one hand or hung off their shoulders, I thought "not bad." Lots of drum troupes use the thrill of marching in through the crowd with a strong beat, though. Classic performance move; it always excites. But the series of beats they opened with, while dead-on rhythmically, interlacing deep bass notes from larger drums with higher-toned notes from smaller ones, still seemed basic. Come on, I thought, don't these guys live on a small Japanese island in a commune devoted to training as a percussion ensemble and spiritual force, or something? Put another way, I thought during that first number (pictured), is that all they've got?

By the end of the show, however, you'd more likely have seen a Wayne's World-style "I'm not worthy!" display coming from this drum fiend. 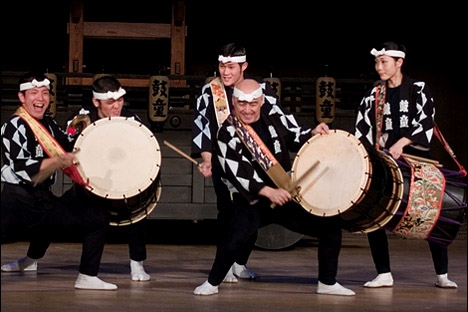 Kodo redefine the power of the drum, and the One Earth Tour they brought to town -- the Toronto stop for which concludes at Massey Hall tonight before the North American leg wraps up in Montreal this weekend -- has been going strong for some five years. The group itself, which has fused traditional Japanese forms with collaborators as diverse as DJs Krush and Kevin Yost and Grateful Dead-cum-Planet Drum lynchpin Mickey Hart, last year celebrated its 25th year in existence with a new best-of CD. 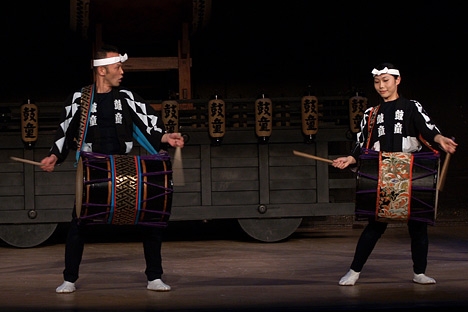 Kodo translates literally as "drum" and "child", and children of the drum they may be (men and women both), but these are grown-up boys and girls: during one number, two players launch their entire lean, muscled bodies forward from a low squat to pound barrel-sized drums (Miyake, much larger than the ones pictured above) with untapered wooden batons, while on the other side, their partners pound a series of underlying beats on the opposite skin.

Other show highlights included comic relief from a trio of Kodo members playing handheld instruments along with changing facial expressions in what became, on the trio's return to the stage near the finale, an audience participation segment of clapping call and response. The physical comedy from one of the three arose from his crouch-walk position, his bent legs cycling like egg beaters while he held aloft what looked like a huge percussive paddleball piece (minus the rubber ball-on-elastic bit). And a quieter piece incorporating the shamisen, flute and singing led perfectly the thunder that was the 800-some-lbs. o-daiko, or huge taiko (below, on platform), constructed from the trunk of a single tree, measuring four feet across each drumhead and played by two serious stick-wielding ninjas, one on each side of its massive frame.

The precision, symmetry (from rhythmic timing and perfect choreography right down to coordinated outfits), electrifying spectacle and sheer joy these performers bring is well worth seeing. Who cares if the show hasn't changed much since it last visited Massey Hall four years ago? If the drum that weighs more than Jerrold, myself and our Kodo contest winners put together ain't broke ... 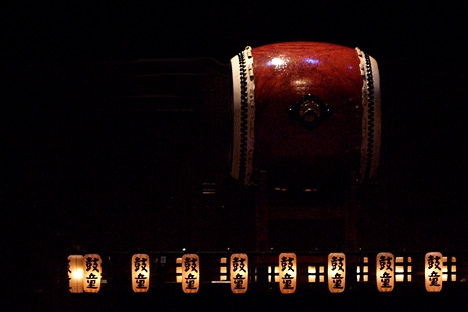