Toronto loves the TTC! The Gladstone hotel housed the Toronto Transit Camp yesterday - a series of loosely organized conversations and working groups centered around improving Toronto's transit system. When I got there, shortly before 10 am, the place was already packed! The back room was filled with taken seats, circling around the opening speakers. Fine with me, I wanted to stay close to the coffee table anyway.

After a few explanatory words audience members were invited up to the mic to suggest discussion topics for improving the TTC. I got up myself to suggest a poster campaign commissioning local artists and illustrators to do transit themed posters. Fellow illustrator Julia Breckenreid, immediately pulled me aside and told me about the Art Bar she had set up in another room.

Once all the topics had been suggested, everyone broke to find their preferred group. I headed straight for the Art Bar. Conversation centered on finding a place for art on TTC grounds - on subways, streetcars, in subway stations, at bus stops -everywhere. A gallery car on the subway itself was one suggestion. Others included city wide exhibits, tunnel art - stretched to be seen from inside the moving subway car and rotating installation spaces in the stations. 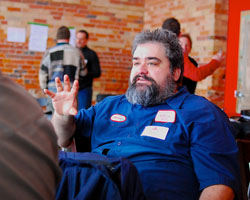 A great deal of interest was expressed in TTC drivers themselves perhaps operating a blog to share stories about drunks, lunatics and the rest of the TTC's colourful ridership, whom they deal with everyday.

As interesting as the new suggestions being raised were, some of the already existing things going on with transit were just as exciting to hear about. New Mind Space gave a midday presentation on the late night subway parties they've been organizing on the back-end of subway cars.

The TTC itself is in the process of automating the calling out of stops on the subway cars with recorded voices - celebrity voices were immediately suggested. Imagine David Miller, calling out Queen station, Matt Sundin calling out Union station, or dare I say... Todd Julie, calling out Keele?

Automation and technology were big themes. The tech-nerd faction was probably the most dominant group and laptops were everywhere. Toronto Transit Camp has a strong web component including a wiki with a comprehensive accounting of the day's events and the ideas it spawned. Be sure to check it out. Toronto transit's function is to connect the city. Artistic input from the community will multiply the different ways this is achieved, beyond getting people from point A to B.

Update: CityTV has posted a video and write-up of the event.