To be honest, I like naked women more than most people. So Marina Zenovich's documentary film, "Vanessa Beecroft in Berlin", easily attracted my attention. Vanessa Beecroft's art gallery installations consist of groups of women, in various stages of undress occupying different gallery spaces.

The documentary chronicles the exhibition of VB55 at the New National Gallery in Berlin and examines Beecroft's work from various different perspectives. Zenovich interviews museum curators, gallery goers, Beecroft herself and the women who get naked for her to provide a snapshot of the diverse opinions that surround the work. With a tolerable level of dry, respectable artistic critique thrown in for good measure, it is the commentators who are more emotionally affected by the installation - whether they want to admit it or not - that give the film it's interest. 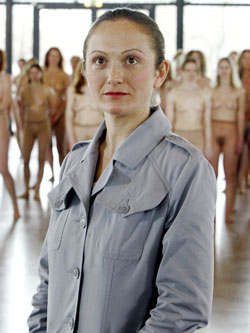 On opening night, the audience walks into the gallery to the sight of 100 naked women of various different ages and body types. When asked about their reactions to the installation, audience members can be very revealing. Most female commentators cannot help disclosing their own body issues. Those who come by it honestly cut the most sympathetic figures. "To be confronted by so many naked women, when one is formally dressed, touches me in a very strange way" says one female onlooker. Male audience members trod carefully, trying to avoid the obvious boobie traps inherent in commenting on Beecroft's work.

Vanessa Beecroft's art is given meaning through our reactions to it. The artist herself understands this. It is perhaps for this reason that Vanessa Beecroft herself, fairs best when interviewed about the work. She is honest and unapologetic about her work and so provides the richest interpretation of it. She points out that despite the model's vulnerability, it is the audience that really occupies the hot seat. Smiling to herself over the ironic role reversal, she says: "It appears as if its some exciting stuff to look at and then... its not".

*"Vanessa Beecroft in Berlin" is playing at The Al Green Theatre, as part of Canadian Art's Reel Artists Film Festival tomorrow at 7pm with the director in attendance.