What song would you listen to if the world was coming to an end? I'd choose something pretty metal - "Burning Inside" by Ministry maybe. When this question came up at Buddies In Bad Times Theatre last night, the popular favourite was 'We Are The Champions' by Queen.

This made me feel far away and separated from those around me... and rightly so, because exploring the similarities and differences between people is what 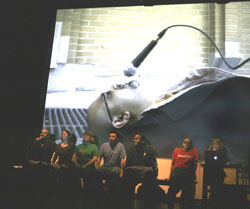 Darren O'Donnell's show Diplomatic Immunities: The End, is all about. At one point, while rearranging chairs onstage, O'Donnell pretends to forget where to stand for the next segment and quickly brings the stage plan up on screen. Explaining the illegibility of the drawing, he says of the show's cast members "See we only know where to go based on where we intersect with each other". This I think, is emblematic of the show's message. We all understand ourselves and our places on life's stage, only in relation to one another. Diplomatic Immunities expertly probes these points of intersection in the cast, the audience, strangers and small children alike. Q&A sessions with cast and audience members are done live, while interviews with random strangers and public school children are shown on screen.

Most people are surprisingly candid, disclosing sexual experiences, political beliefs and secret fears without batting an eyelash. I had no idea so many people believe in ghosts! Despite this, by the end of the performance I feel closer to those around me. Even if we can't agree on the right socio-economic model, at least we all love Key Lime pie.