Kent Monkman's wigwam has that new carpet smell, and it's giving me a headache. I'm standing inside the heavy Victorian-parlour drapery of Salon Indien, watching "Group of Seven Inches" projected from the chandelier above onto the underside of a bear skin rug strewn on the floor below. As Miss Chief Eagle Testickle, Kent Monkman bears a striking resemblance to Cher in a Bill Blass dress (or lack thereof), and the Guy Maddin schtick goes on a smidgen too long. While hiting the nail repeatedly on the head, Salon Indien revels in campy fun undercutting the serious undertow of colonial language appropriated. If the flick isn't didactic enough, there's a three page legal sized handout to read besides. "This is my first booth, and I could go home right now and have plenty enough to write about", I stated to the MOCCA folks, not realizing how true this statement was.

There is a lot of competent, well-crafted art at the TIAF (Toronto International Art Fair), and not succumbing to sensory overload takes skill. However, this year's fair feels weaker than those previous, while "matchy-poo" art (as in "this painting matchy-poos my couch and that one matchy-poos my curtains") reigns supreme. 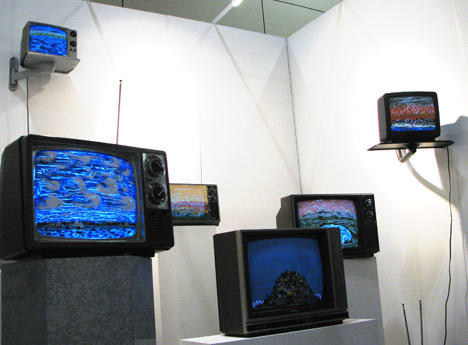 Yet, sometimes I come across work that is so deliciously simple and brilliantly executed, my heart sinks a little with jealous despair. One artist did this not only once to me but twice: Iain Baxter (run and see Still Life Animal Preserve with Ruby Red Shelf at the Corkin Shopland Gallery, booth 901, and his work at the Solo Spaces booth, pictured above).

The TIAF continues this Sunday and Monday, November 12 and 13, 12-7 pm at the Metro Convention Centre. General admission is $16, Seniors/Students/Groups are $12 and children under ten are free.

The othergallery from Winnipeg, booth 209, always manages to impress.