Peanut Plaza is somewhat of an iconic Toronto shopping centre.

With its fading aqua-coloured roof and clustered parking lot, the compact plaza offers an impressive roster of shops and services to the residents of the apartments and townhomes which surround it.

For non-locals, the plaza is best known for being that weird place named after a legume. 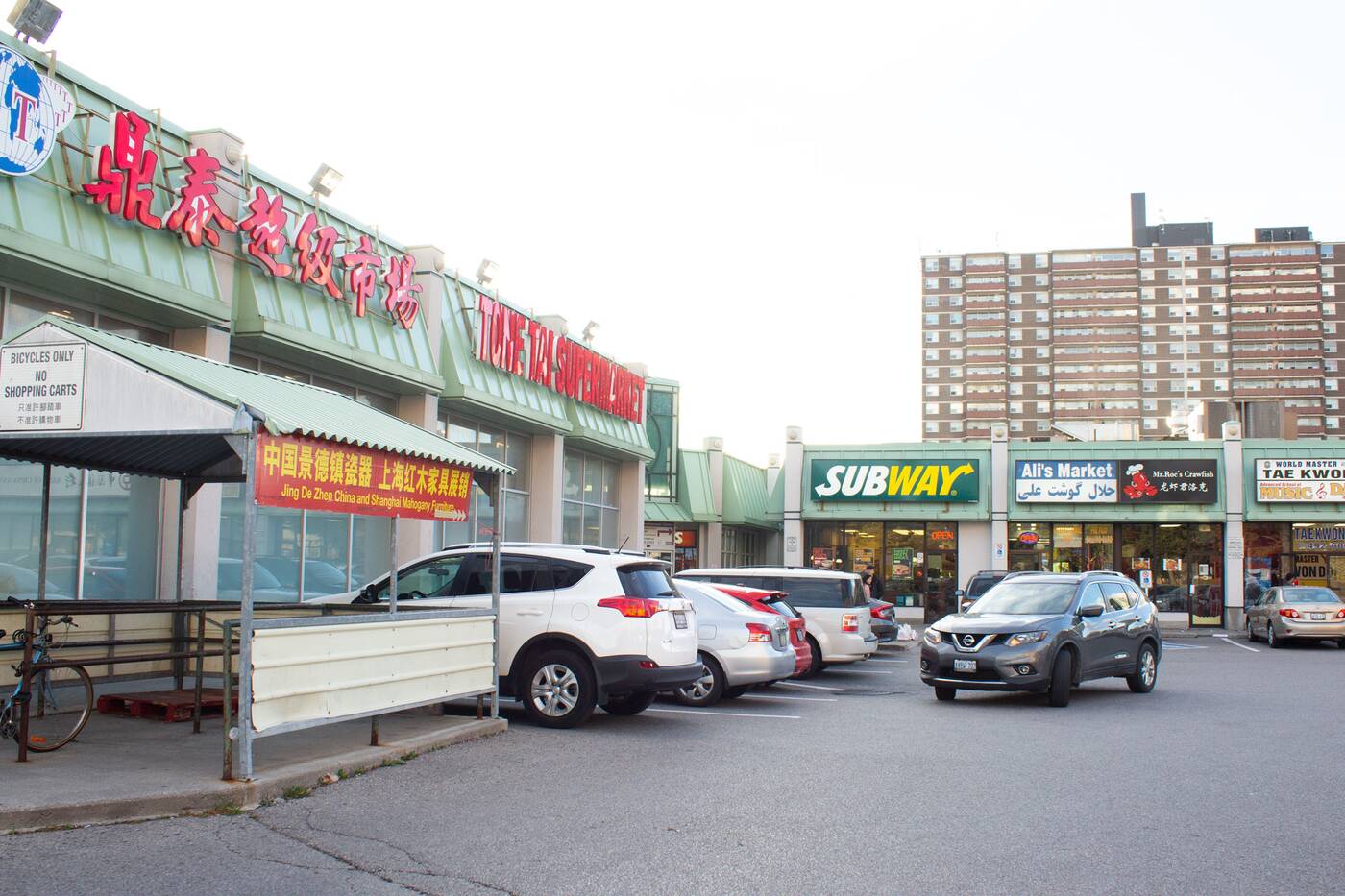 Peanut Plaza was built in the 1960s and is owned by the developing company the Sitzer Group.

Built in the 1960s, the 10,000 square-foot centre sits on a peanut-shaped parcel of land formed by a rare-occurring fork in Don Mills road—hence its name—equidistant from Sheppard and Finch. 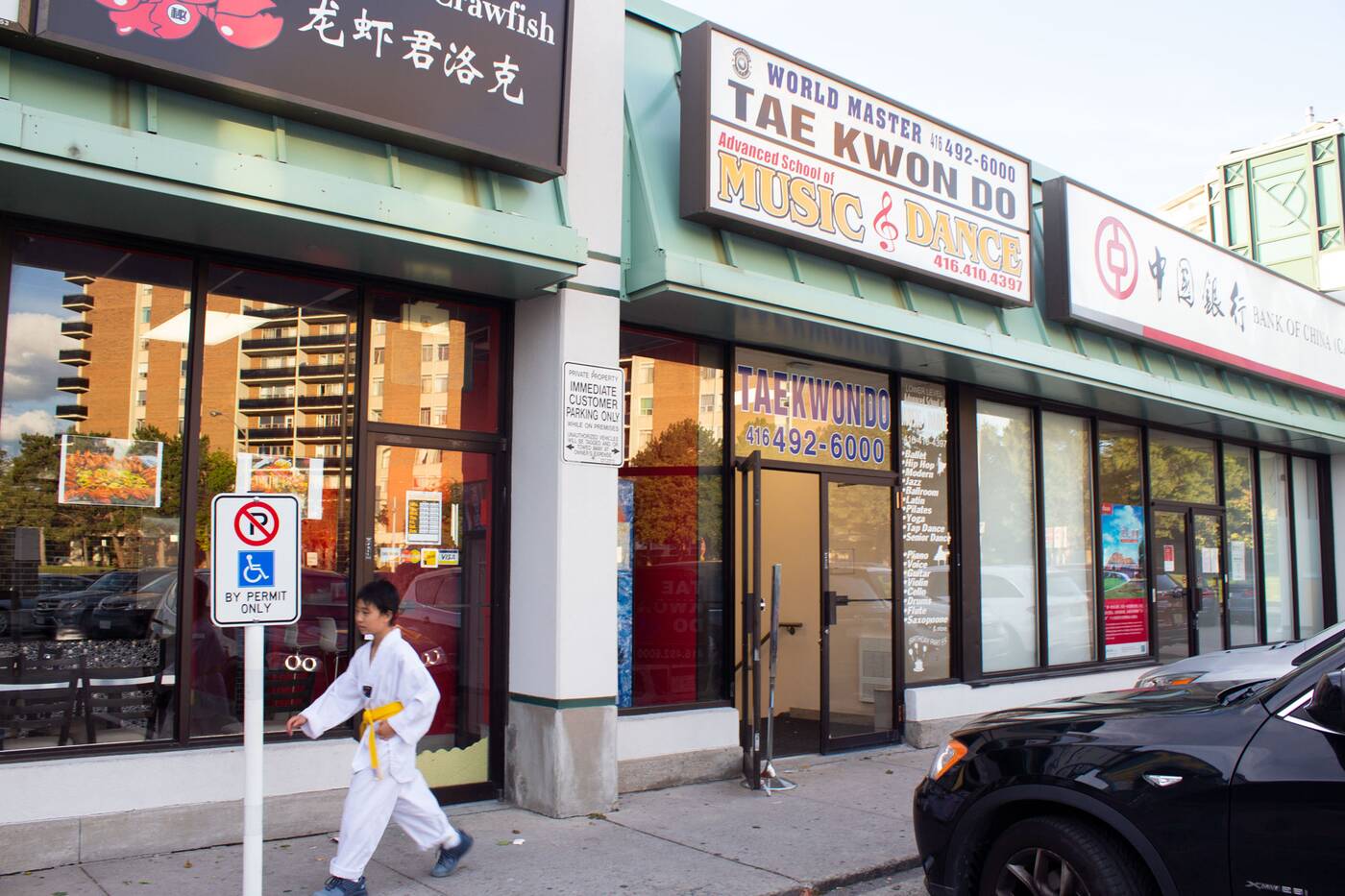 The plaza sits on a peanut-shaped piece of land on Don Mills Road.

During rush hour you’ll see cars careening down the swerve of Don Mills which becomes two one-way streets on either side, where playing Frogger with bags of groceries from Tone Tai in hand has been a rite of passage for tenants of Deerford Apartments or Goodview Townhomes. 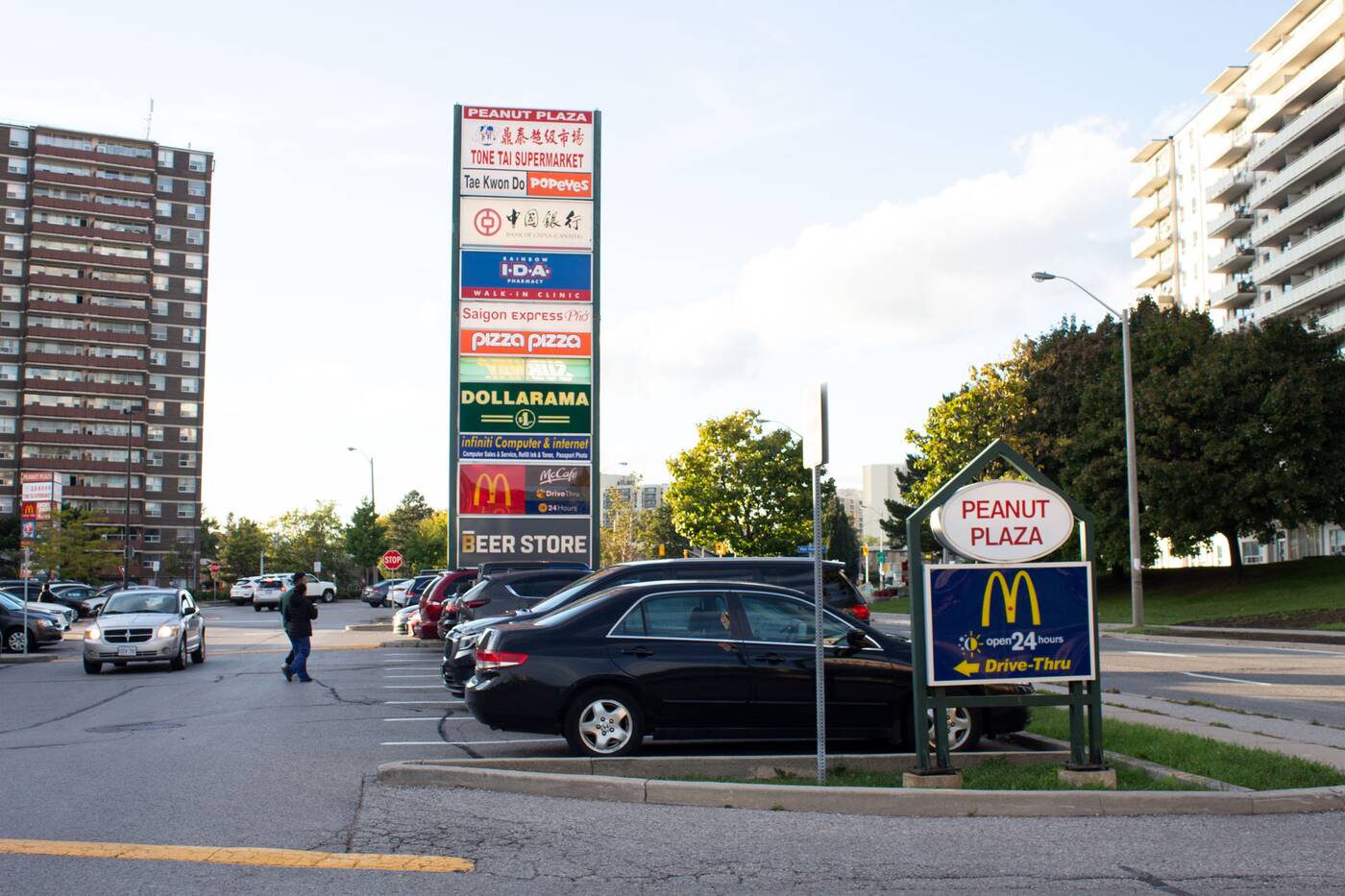 The plaza's many stores service the residents in the area.

Aside from big box essentials like McDonalds, which draws in the kids from Georges Vanier and Woodbine schools, Popeyes, Pizza Pizza, the Beer Store, and the Bank of China, Tone Tai is undoubtedly the main draw of Peanut Plaza. 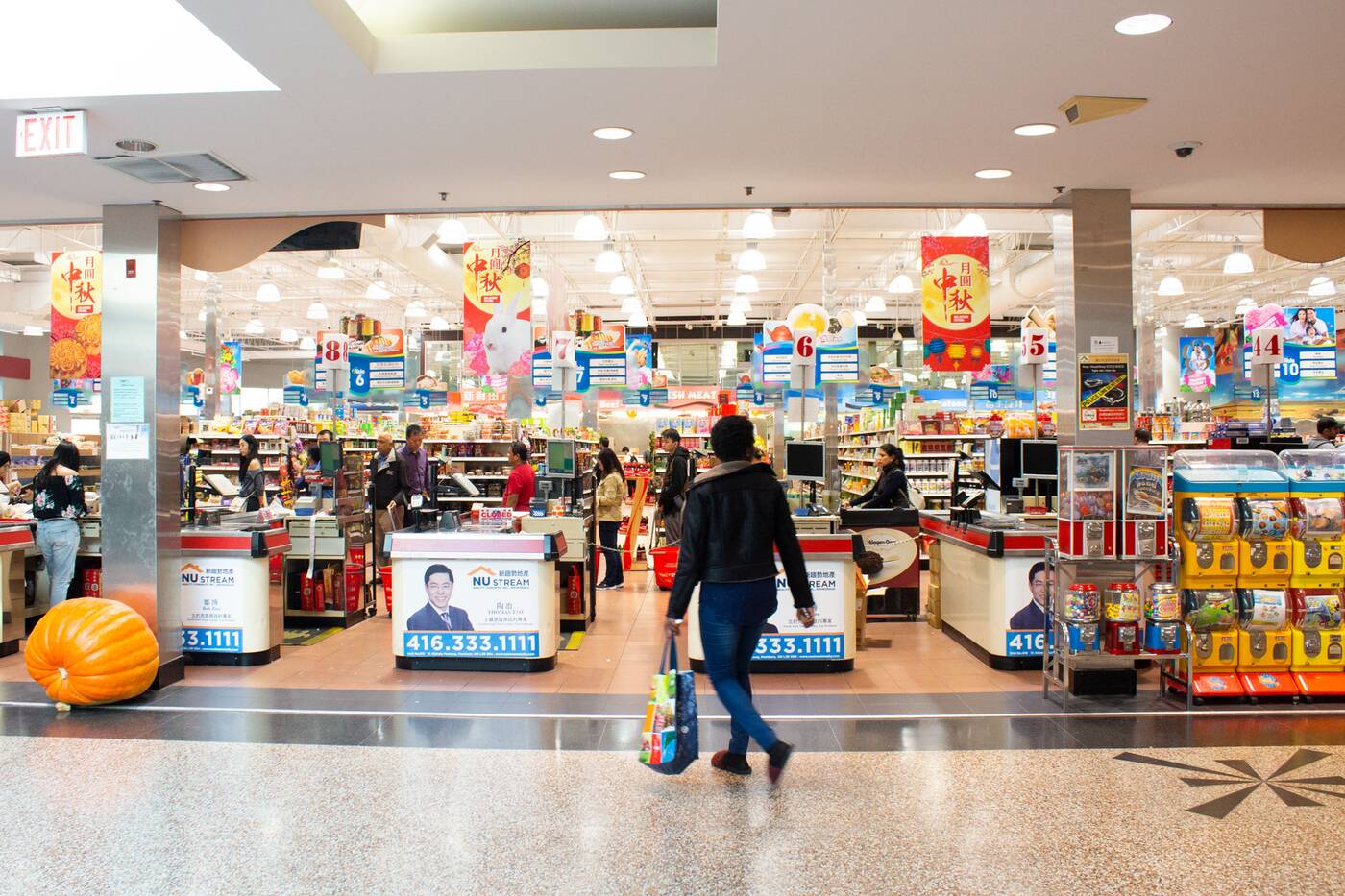 Added in 2009, it's a fairly new addition. Once an IGA, the space sat empty for a while before becoming the Chinese grocery store with a well-frequented seafood market and big selection of Asian products, along with some Latin American necessities. 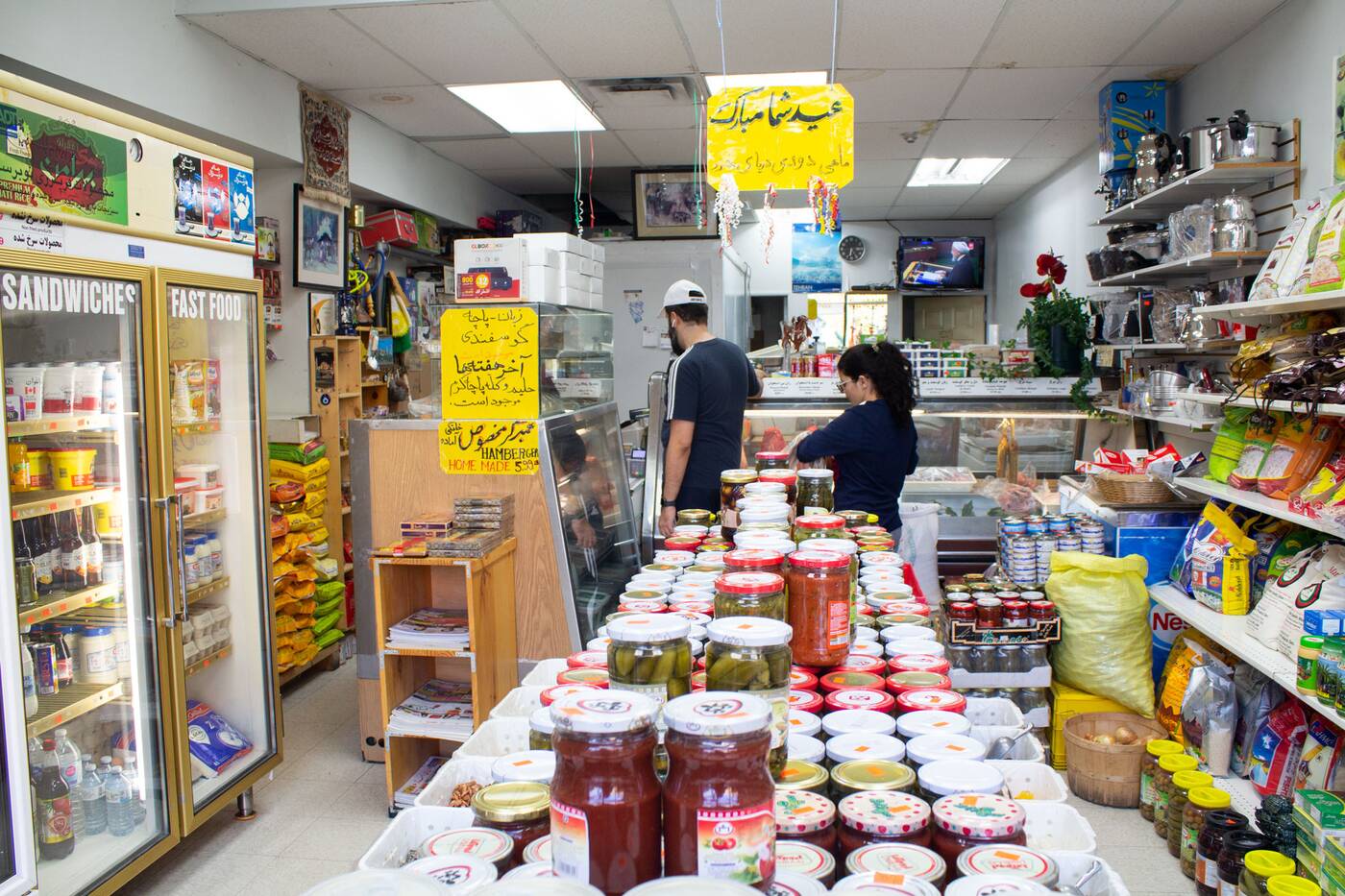 Lining the outside of the plaza is also Ali’s Market, a Persian store selling your usual necessities like nuts, rosewater and packs of flatbread next to a location of Mr. Roc’s Crawfish. 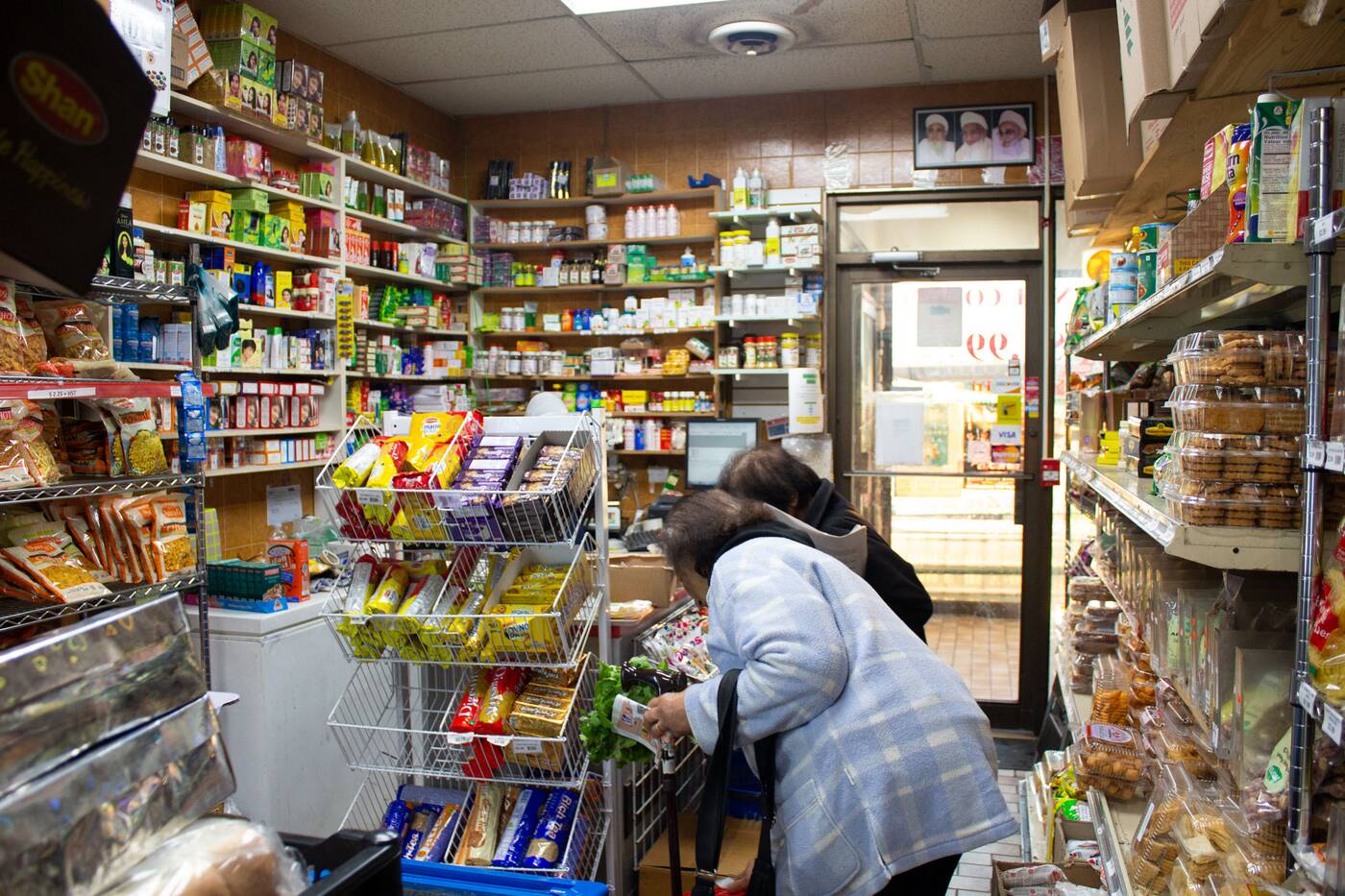 For Indian goods, there’s the tight corner shop Fine India Grocers, a handy albeit sometimes pricey place for Indian and Pakistani goods like dosa batter and spices located on the other end of the plaza. 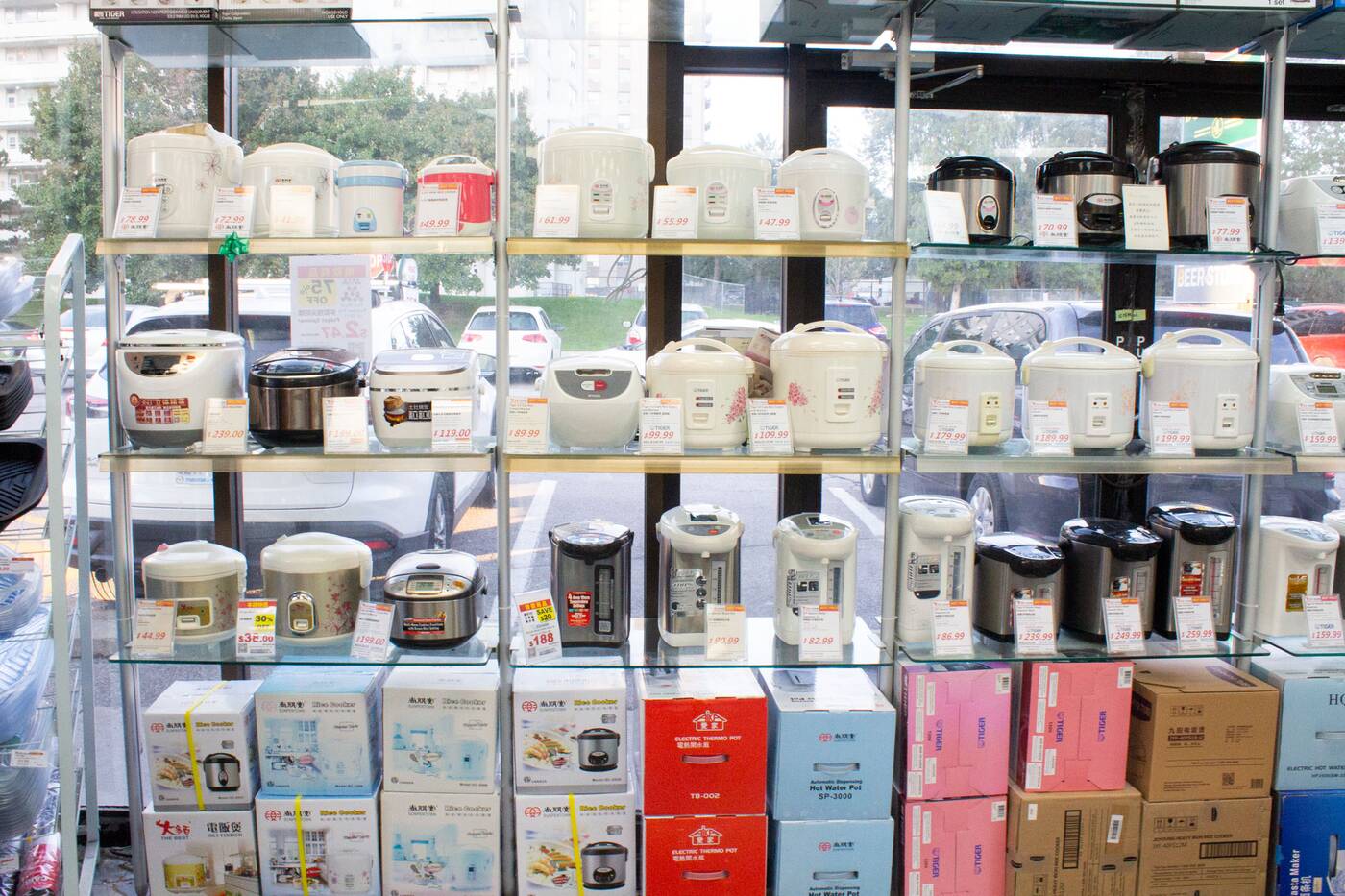 You can find rice cookers and kettles at The Best Shop.

The Best Shop, the second iteration of the PMall favourite, specializes in cheap home appliances like rice cookers and everything else, from notebooks to doilys to bath mats. 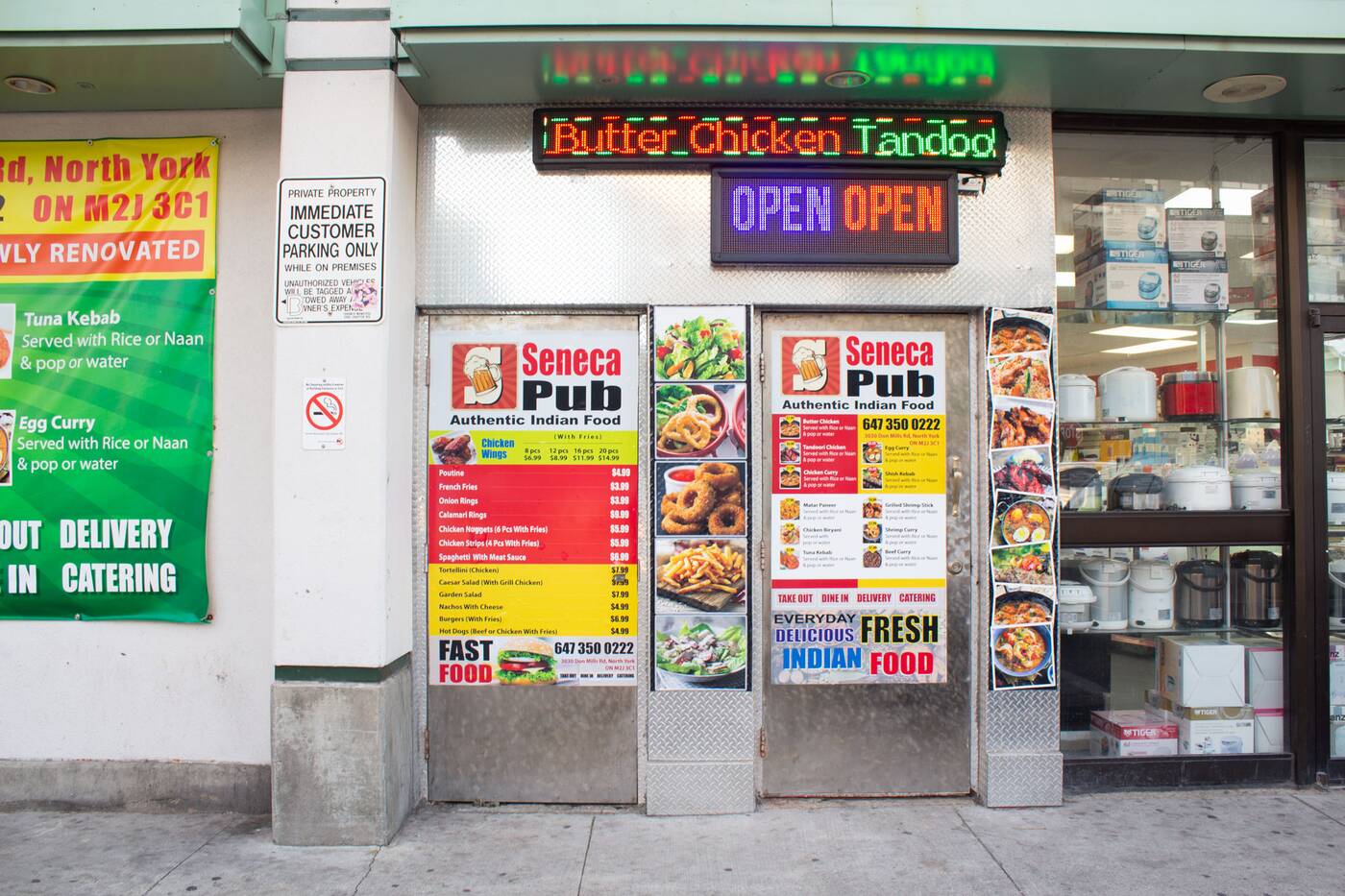 The Seneca Pub is a popular spot for quick Indian eats and games of pool.

Right next door is the Seneca Pub, a deceptively named Indian bar serving butter chicken with a patio and pool tables downstairs. 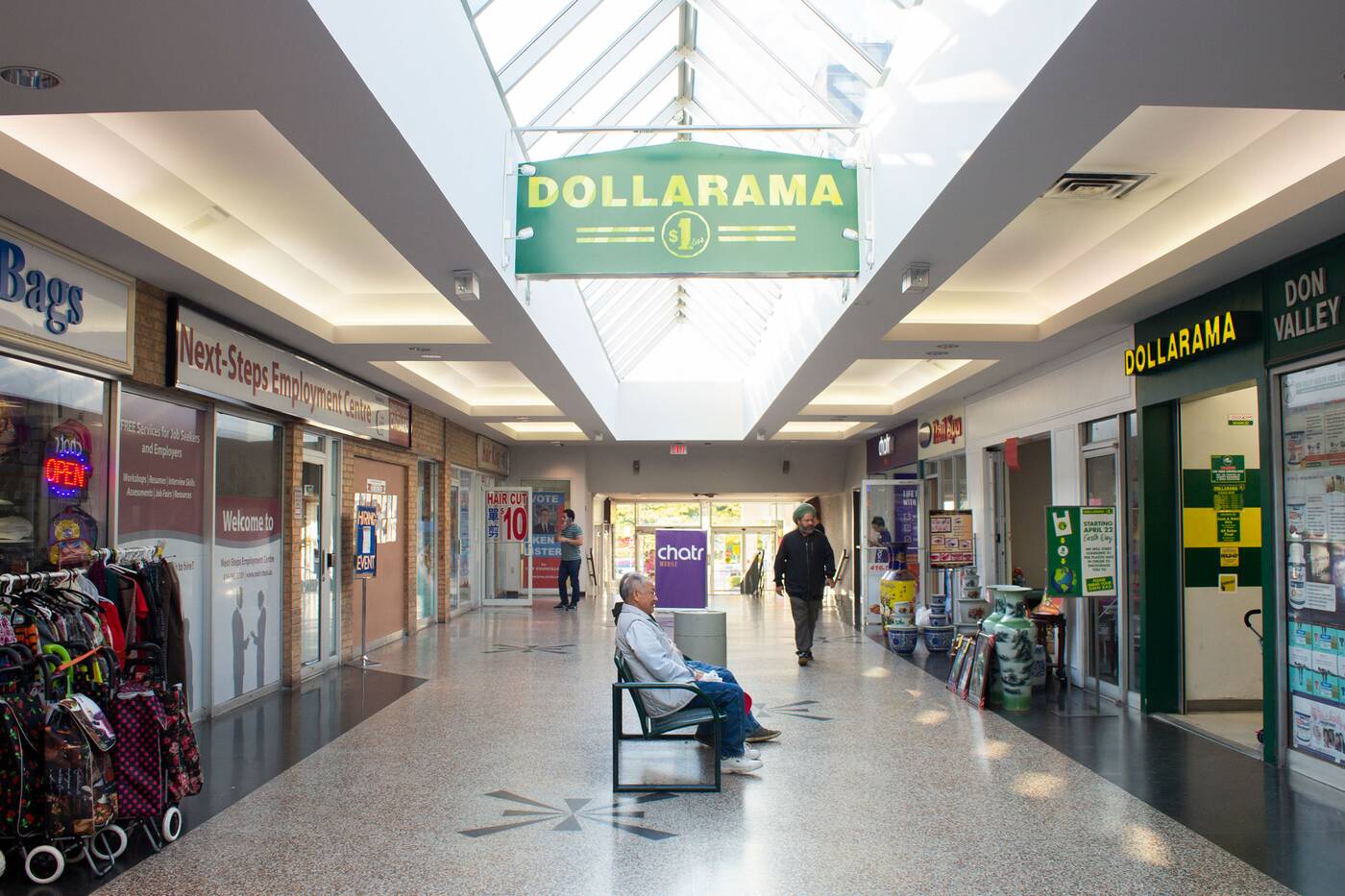 There are a number of small shops and services operating inside the plaza.

Peanut Plaza itself is a well-lit, relaxed place consisting of two main corridors where you’ll find a varying collection of food options, operating alongside the lower-level Dollarama, a hair salon, and 50-year-old Don Valley Health Food, selling the usual salt lamps and supplements. 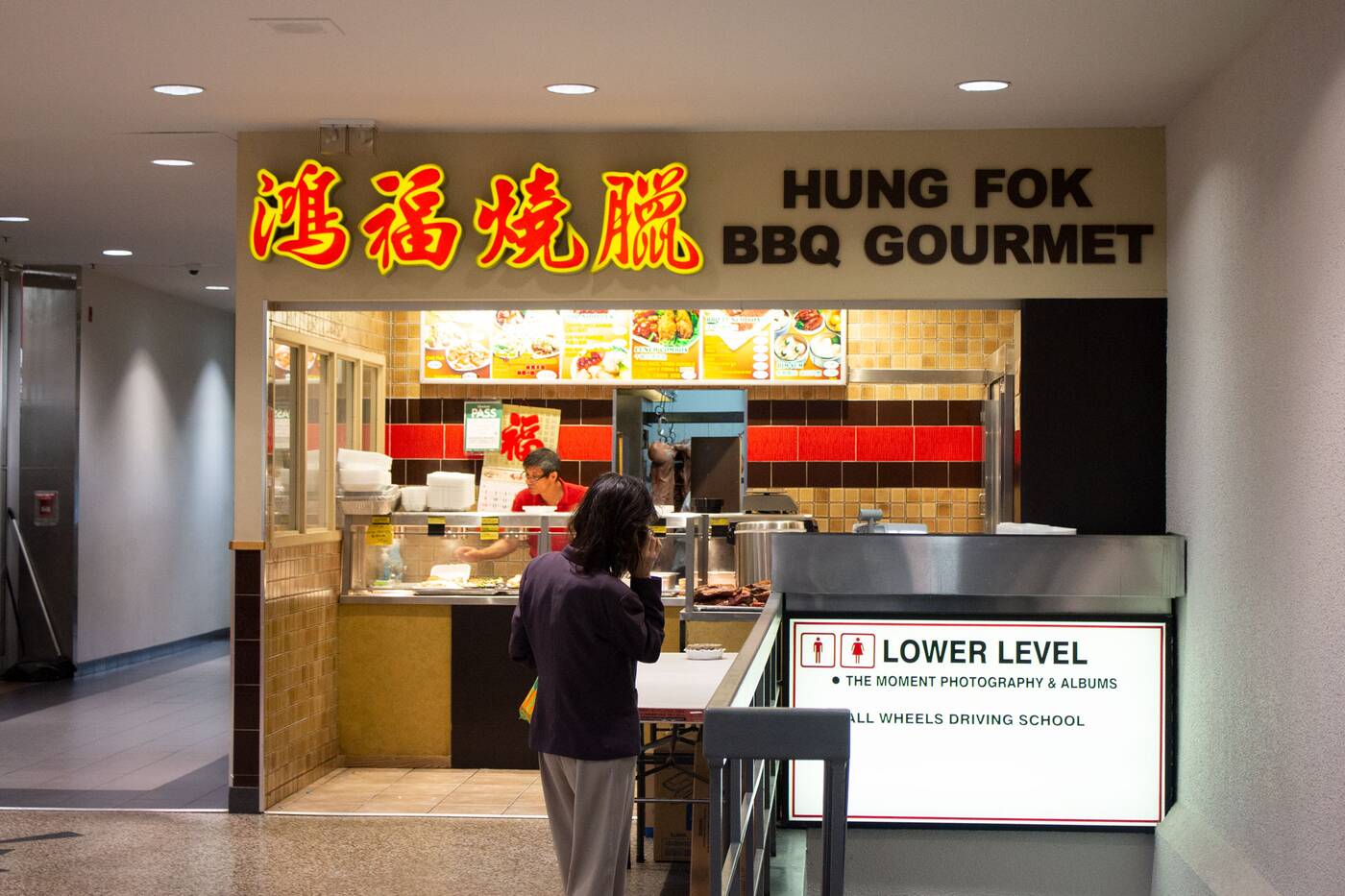 Hung Fok BBQ Gourmet is the spot for those too-lazy-to-cook days, offering styrofoam boxes chopped up BBQ duck with sides of Szechuan-style eggplant and rice for fair prices. 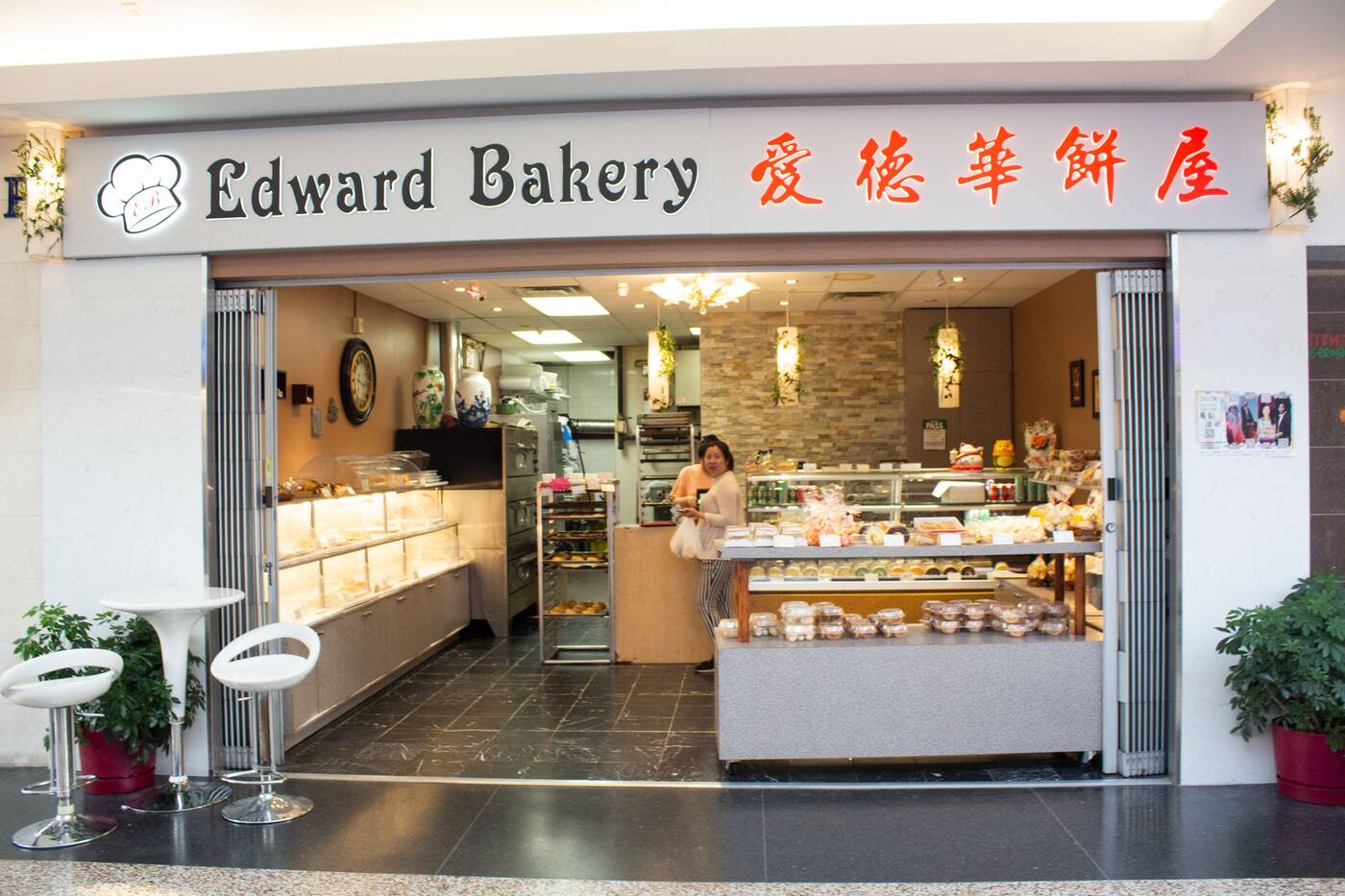 Edward is a traditional Chinese bakery selling pastries and cakes. 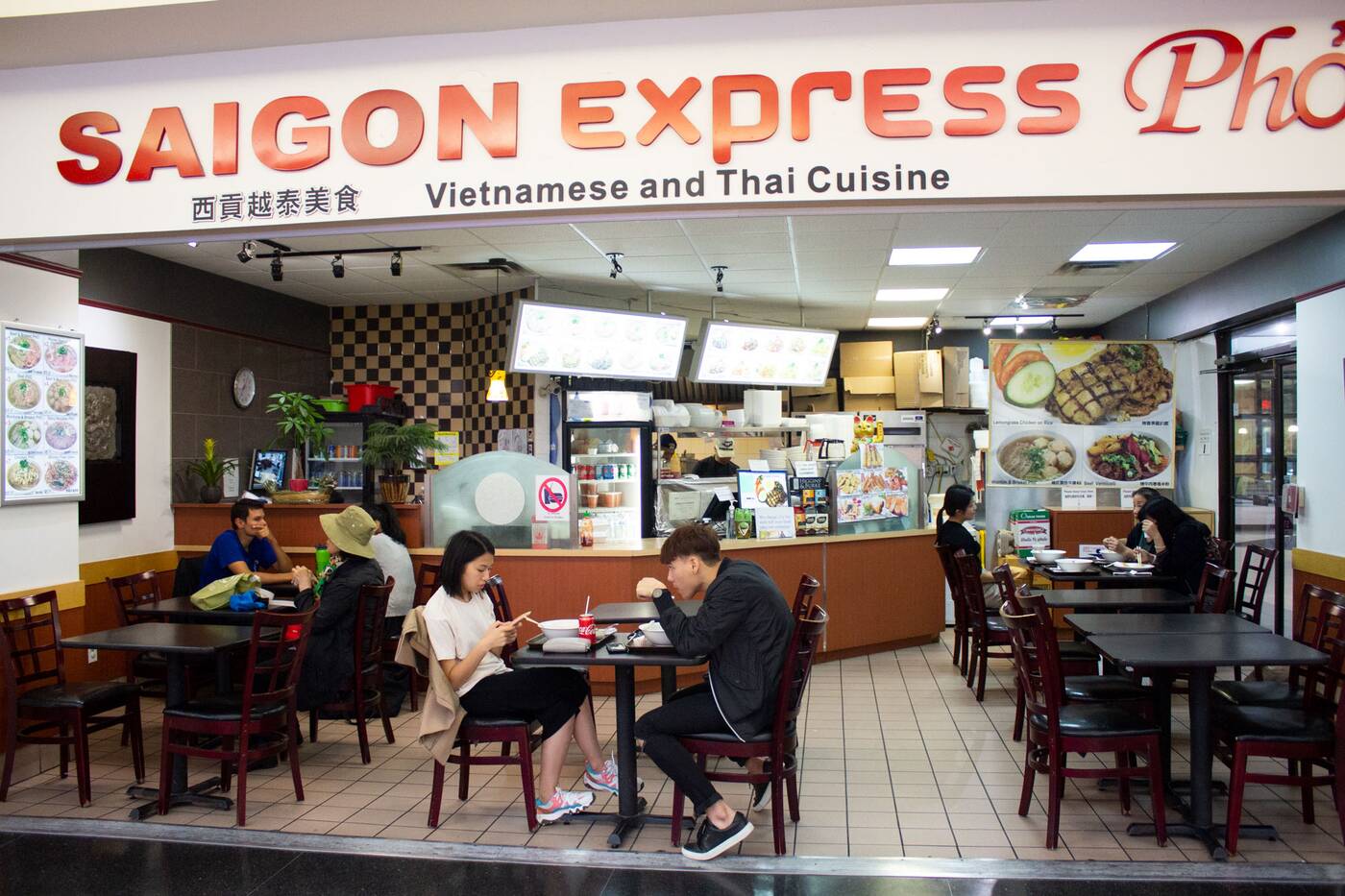 For a pho fix, there’s Saigon Express, a sit-down spot where fresh bowls of one-size Vietnamese noodles and plates of pork chops and rice are offered for cheap. Plus they also have really good milk tea and Vietnamese coffee, hot or iced. 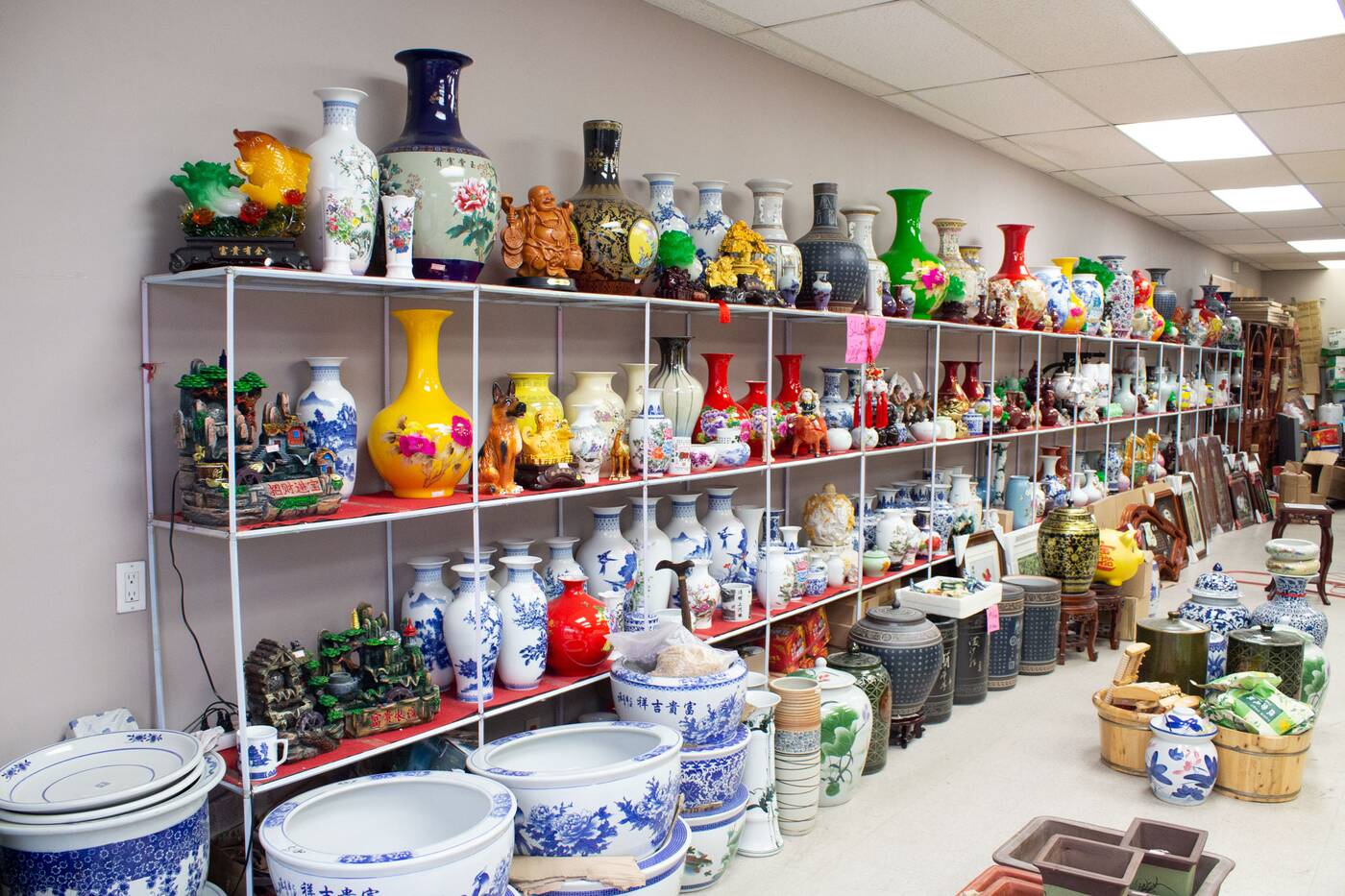 The most reputable food spot here though is undoubtedly Allan’s Pastry Shop, whose flaky goat patties and coco bread have been considered some of the best in the city for over 25 years. 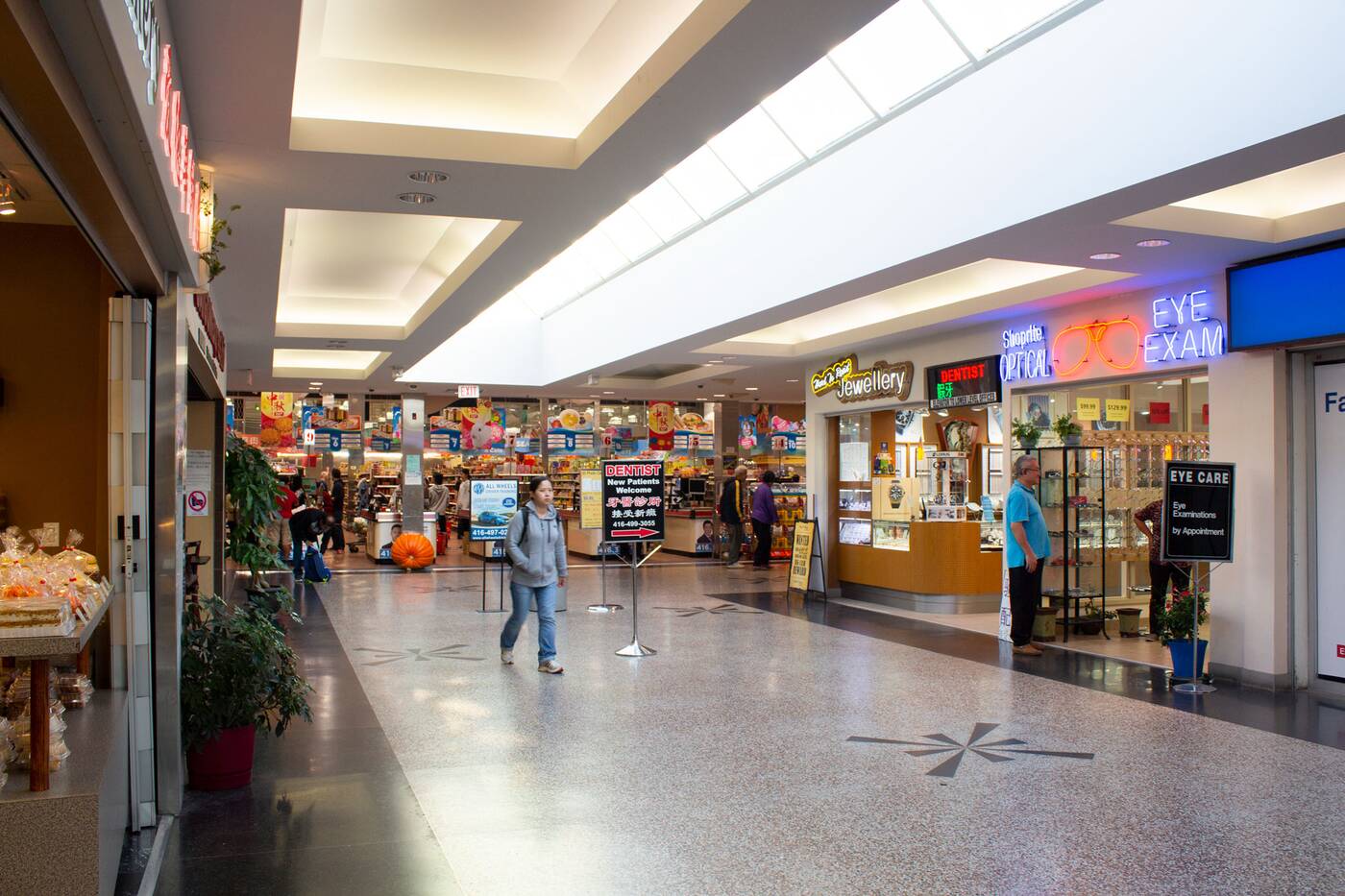 Dedicated pastry lovers will often take boxed frozen patties home by the dozens, which comes up to about $1 per patty; if bought individually, it’s a bit more. 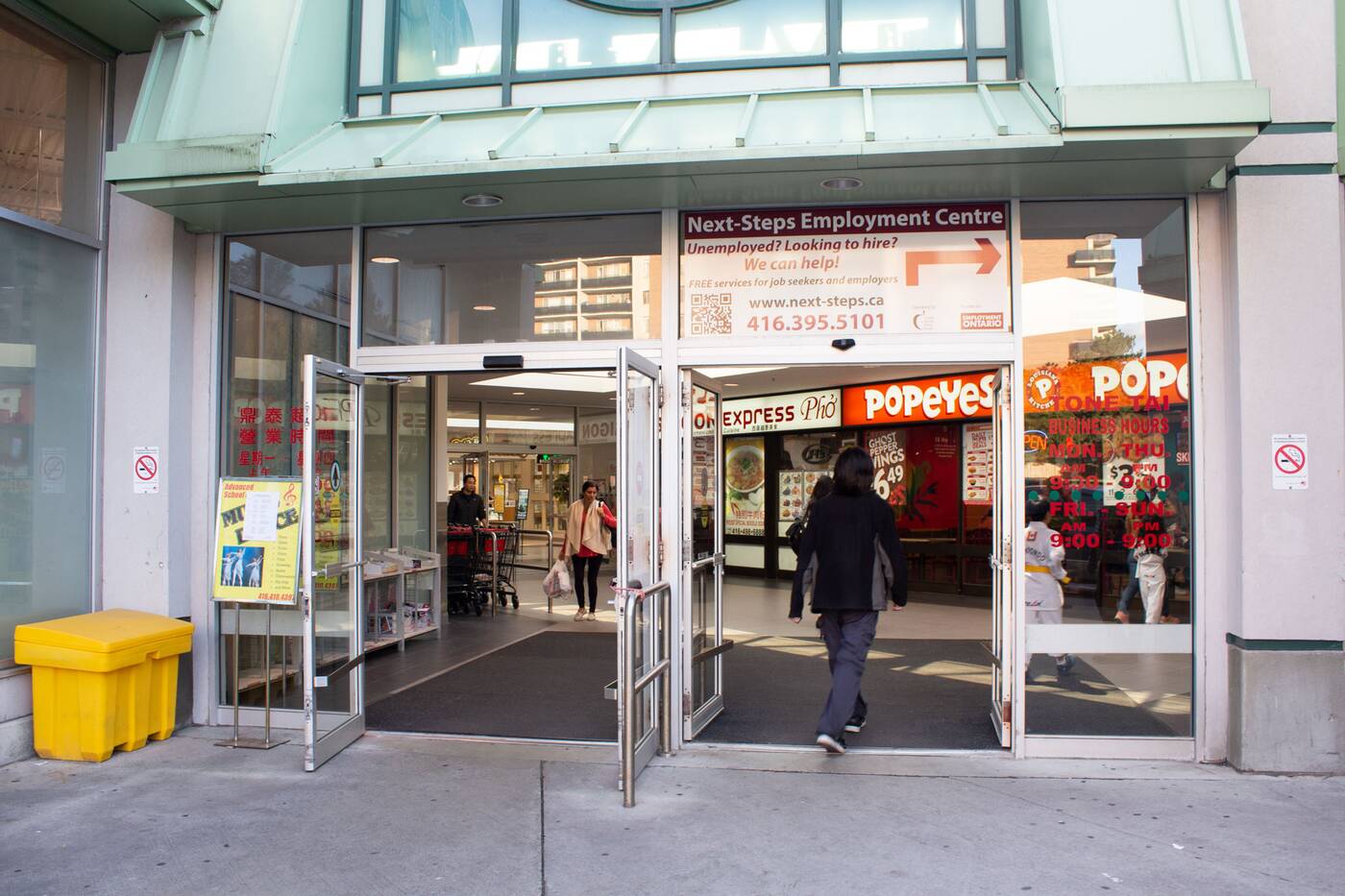 Some stores located outside the plaza can't be accessed from inside.

Head outside, however, and you’ll find another venerable spot whose praises are far less sung. 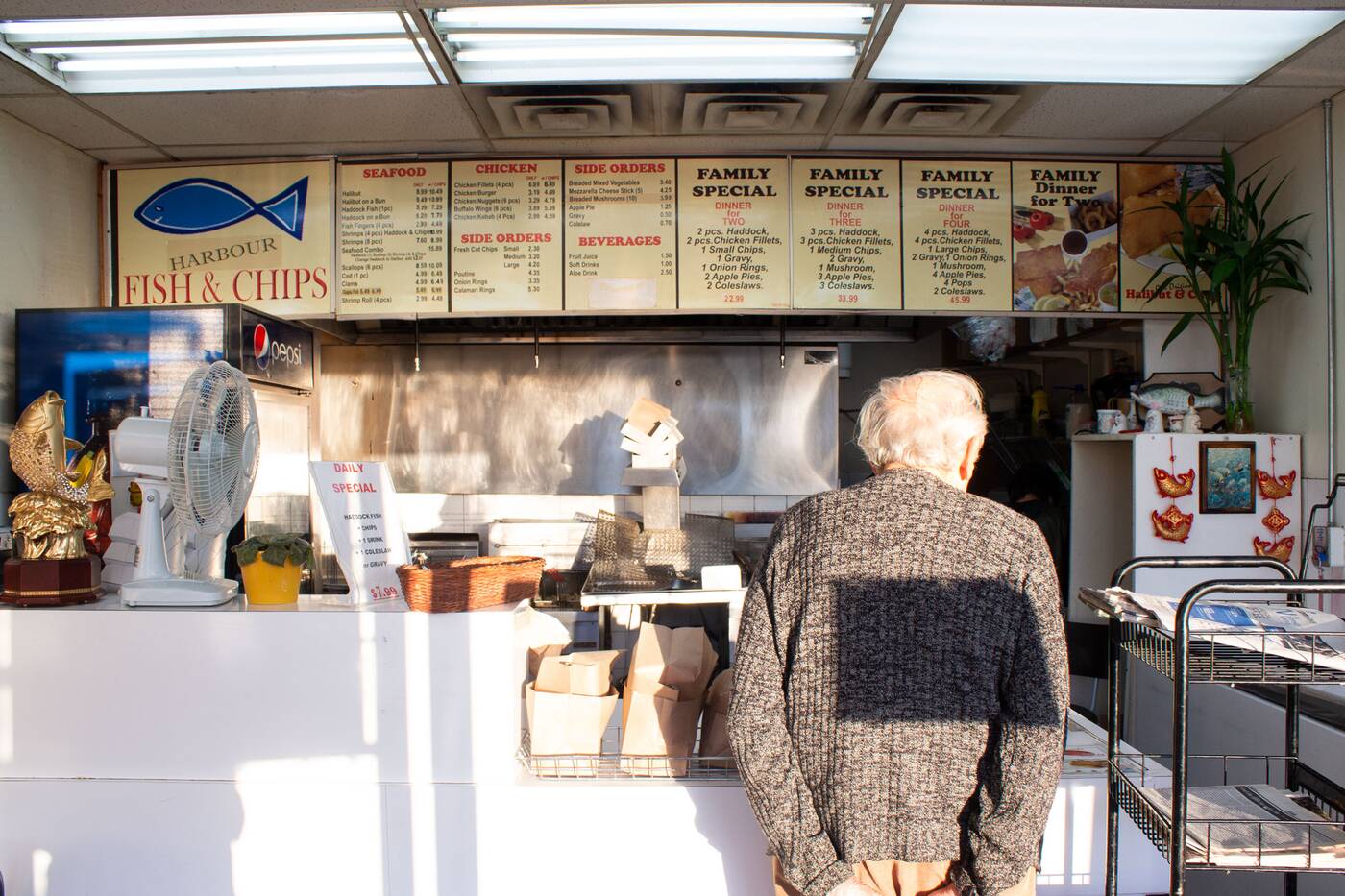 Harbour Fish and Chips has been serving fried halibut and french fries for years.

On the same side of the plaza as the reliably consistent Harbour Fish and Chips and longstanding Mr. Jerk, the original location of the chain which now has locations all around Toronto, is Mr. Gao’s Gardens. 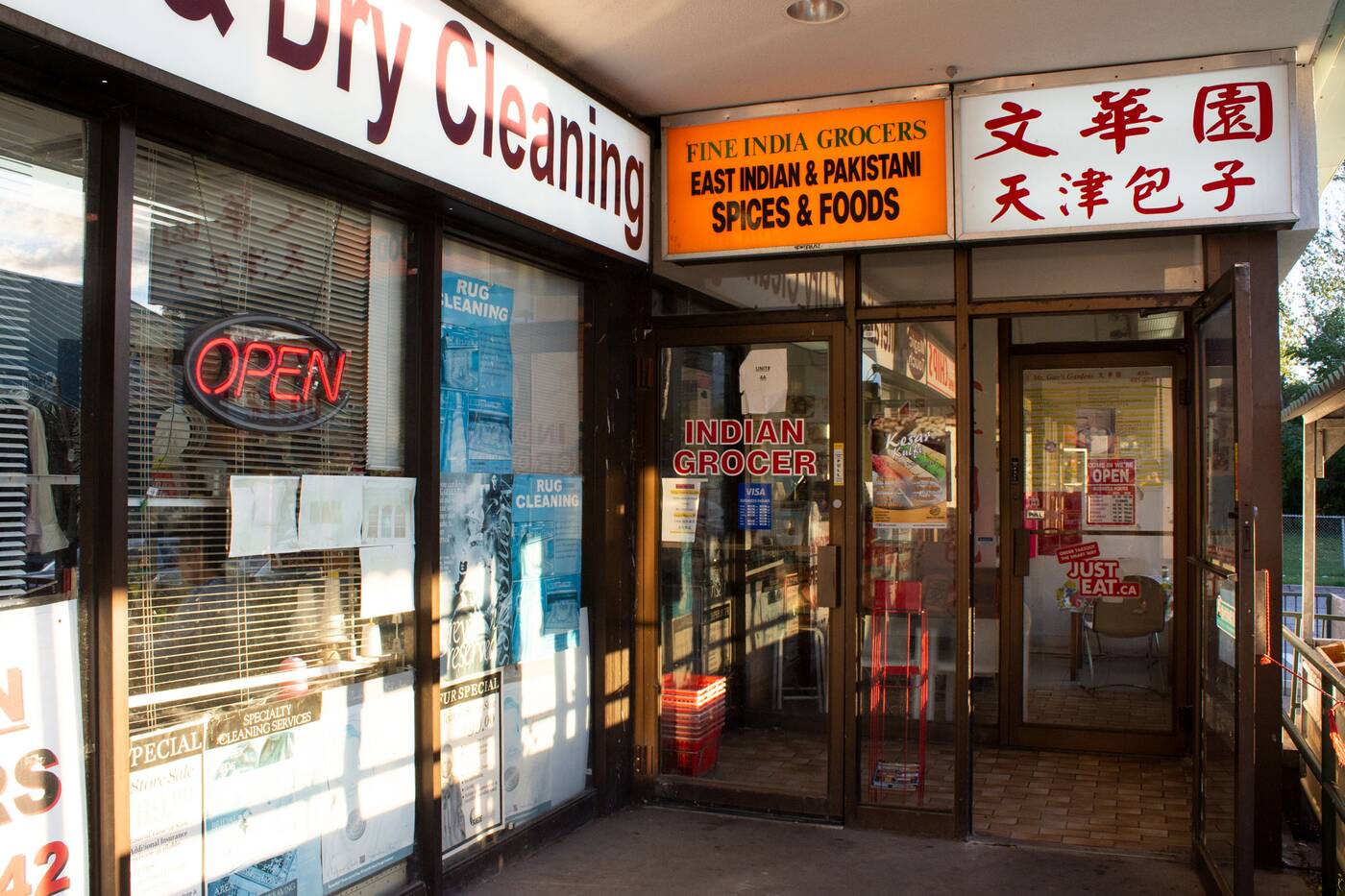 Mr. Gao's  is a tiny stall tucked next to Fine India Grocers.

Operating out of a tiny stall next to Fine India Grocers with nary an English sign to indicate its existence is Mr. Gao’s Gardens, an authentic spot steaming up Tianjin buns for over 45 years. 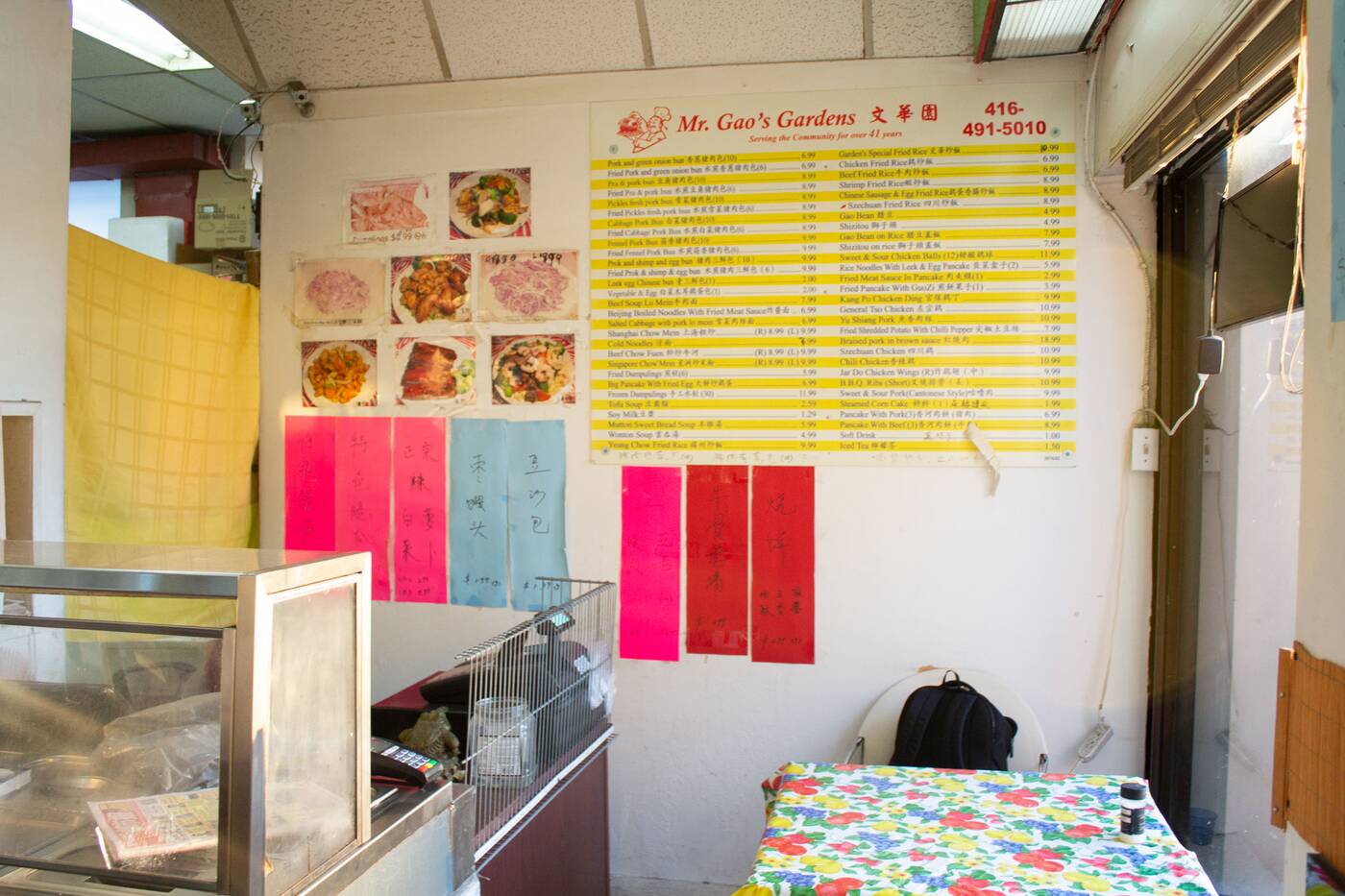 Mr. Gao's has been operating for over 45 years.

There’s a single table here and a little counter with a couple of stools, where you can post up to feast on orders of the thick-skinned Chinese steamed baos that Tianjin is famous for. 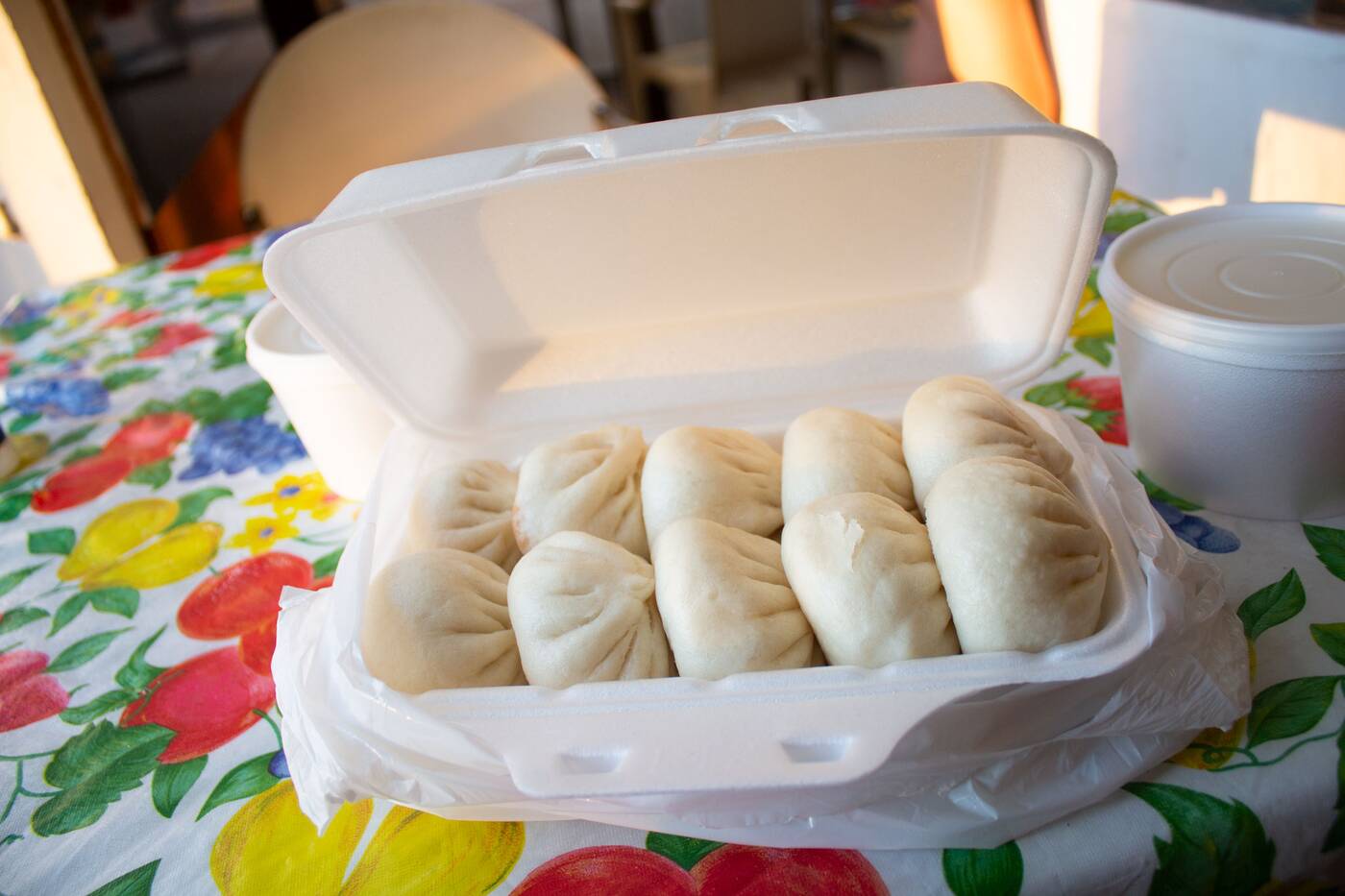 The cashier doesn’t speak English, and it’s cash only for orders less than $10 so if you’re ordering the 10 pork and green onions baos for $6.99, make sure to bring some change.

With such a diverse selection of affordable food, a trip to Peanut Plaza is well worth a trip. It’s just a five minute bus ride from Don Mills station, but first-timers should avoid playing Frogger on Don Mills until they’ve visited a few more times. 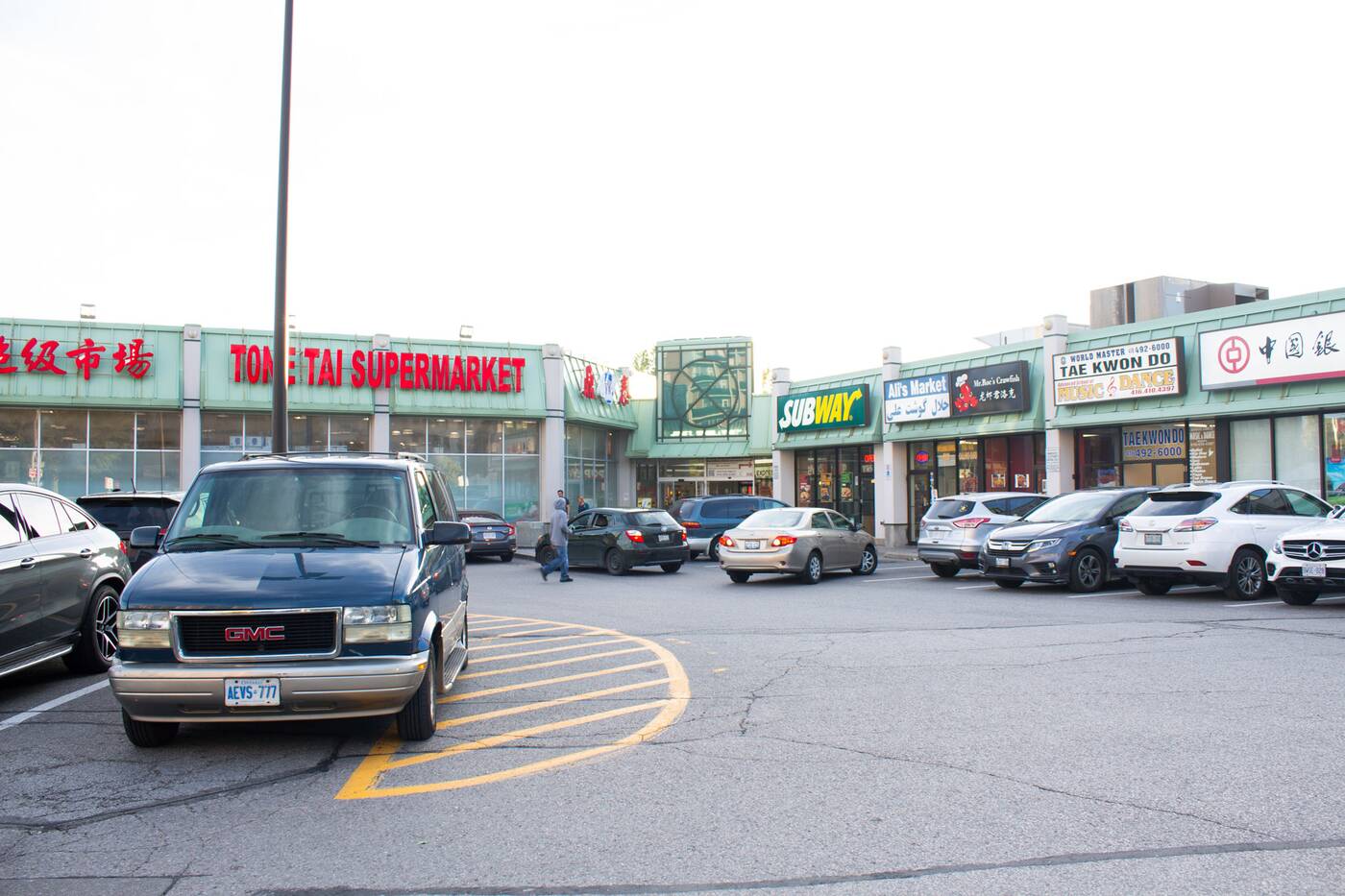 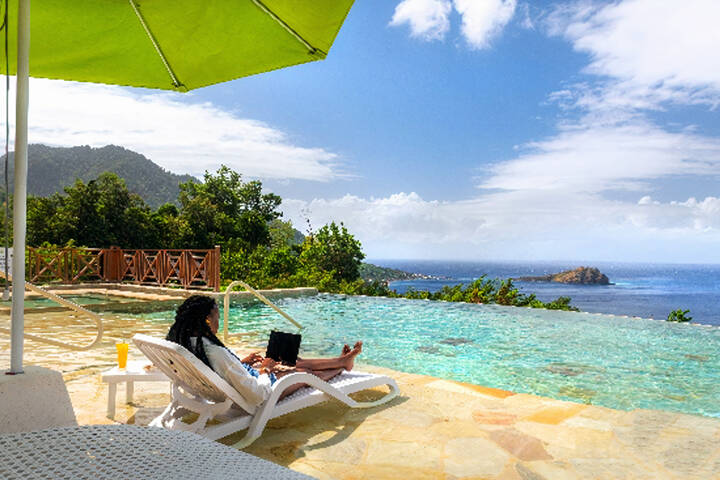 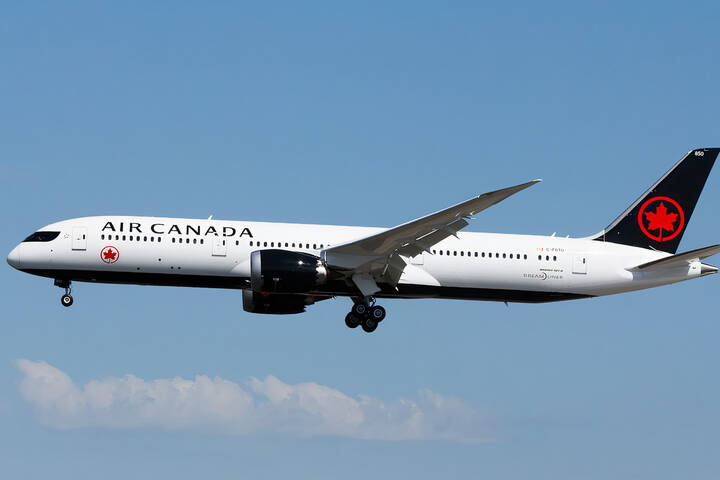 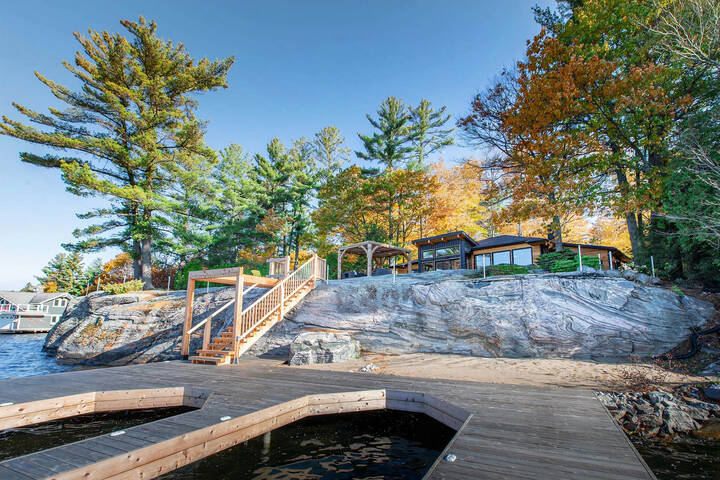 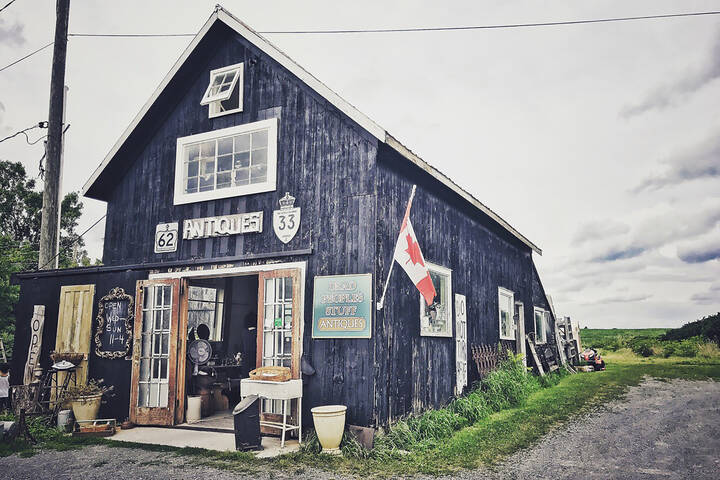 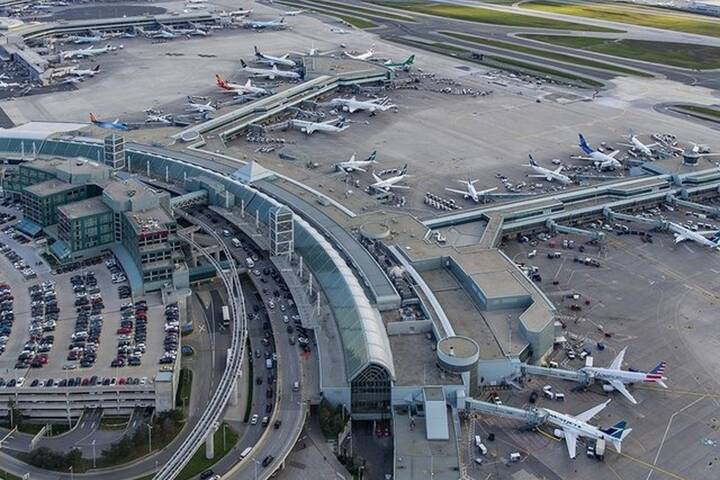