An open letter to girls, as inspired by my recent trip to Downview Park's Canadian Air & Space Museum:

As my unending quest to understand you rolls on, I'm faced with yet another question: do you ever come across certain objects, places or situations that inspire your inner child to mutiny, the little bastard charging forth out of your chest, rendering your adulthood utterly meaningless?

You'll have to forgive me, I come from a place of limited knowledge on the subject, but, do you ever see -- oh I don't know -- a pony or a rainbow or some messy hair attached to a plastic toy that clearly requires brushing, and then suddenly you're a kid again and against every mature inclination you've cultivated over the past decade or two you're oohing and awwing or brushing the shit out of that hair despite yourself?

Thanks (I love you), 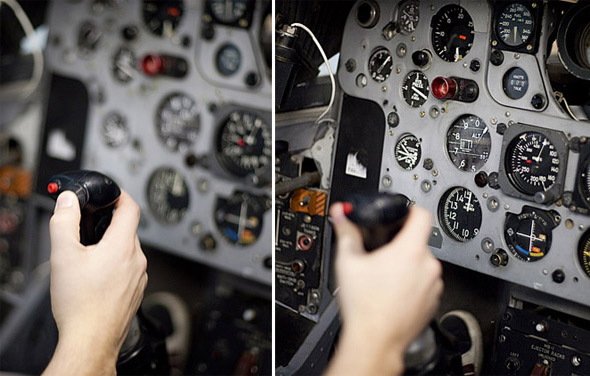 This was me last weekend, pretty much -- only I was in the cockpit of an F-101 Voodoo fighter jet. As soon as I sat down I was no longer an adult. Finding the triggers to be sadly unresponsive, I immediately started singing out the sounds of my firefight, Pchew Pchew Pchew!.

Bill, the museum's volunteer front desk attendant that day, was walking by at the time and laughed at me. But it wasn't a laugh of pity (as were the laughs coming from our photographer and resident Girl expert, Petia), but a laugh of understanding. 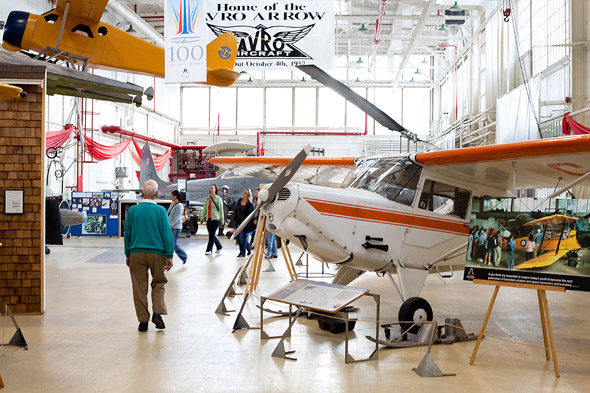 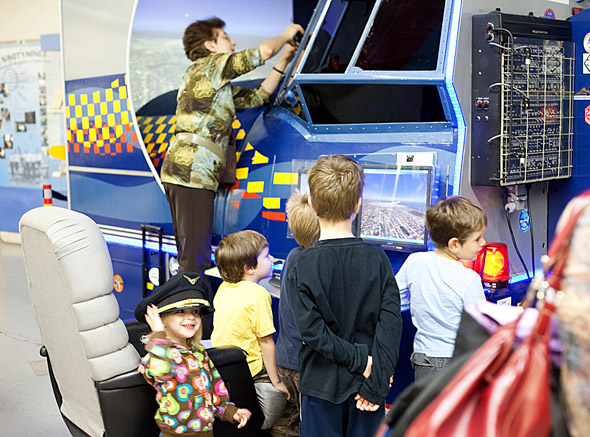 Other than the real kids, and the part-time kids (like me), the Canadian Air & Space Museum is the playground of the airplane and war buff. And there's plenty to get nerdy about here: the world's only full-scale Avro Arrow model, a Lancaster (currently being restored) as well as a host of other military and experimental aircraft. 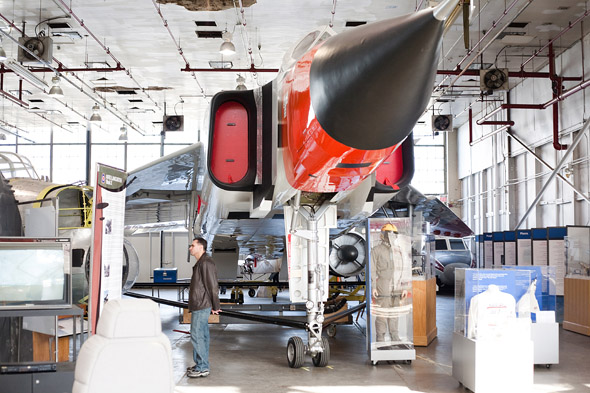 The Arrow is probably the biggest deal here (lit 'n' fig), and people come from all around to look up (waaaaay up) at its tragic splendor. For airplane nerds, or even simply the patriotic, the Arrow is a tragic dual symbol of Canada's aerospace technology potential and the tragedy (as is argued by many) of the project's premature discontinuation.

For most of us, the Avro Arrow is a Dan Akyroyd-related thing, like Ghostbusters and unpretentious wine, but for many it represents one of Canada's most amazing achievements. 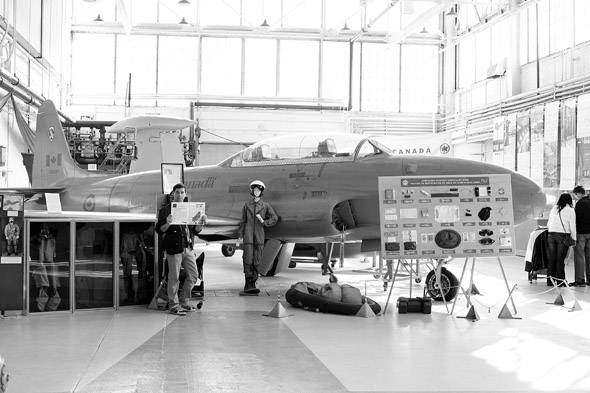 The other giant plane in the building, the "Mighty Lanc" was impressive also, despite being in several pieces. The beast is famous for carrying the heaviest payloads during WWII -- up to 12,000 lbs of bombs -- for the RAF out of England.

Standing next to the Lanc was one of her original WWII pilots, a Scotsman by the name of Philip Gray. Mr. Gray was selling copies of his book Ghosts of Targets Past, a story about his tour of duty in the skies of Europe. 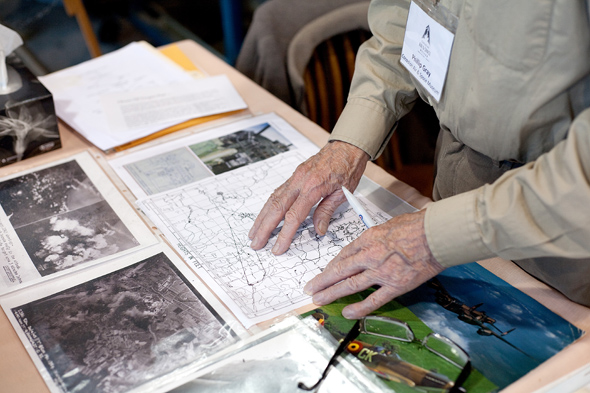 While it was indeed interesting and definitely humbling talking to a WWII veteran, something across the room from his table caught my eye. It looked like a plane, but the wings were bent upward. As I approached, I saw that they were attached to the fuselage with hinges. It was then that I knew it must be, that's right, the ornithopter! 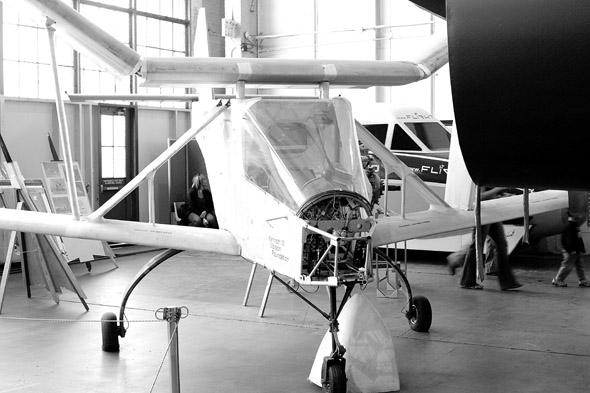 What? Oh, you haven't heard of it? It's a plane that flies like a bird, by flapping its wings. Actually, you can buy toys in Chinatown that'll take care of that job, but in fact this machine, I learned, is the only one in the world to ever fly a human being through the air, and it was only achieved in 2006. Right here, too, at Downsview Park, by a professor and a bunch of grad students from the University of Toronto.

The "Space" in Canadian Air & Space Museum is really just a series of small models on the mezzanine level of the building, and looks more like a high school science fair than a proper museum, which is unfortunate because my inner kid loves space stuff. Though the museum changed its name in February of this year to match the similar institute in Washington D.C., it is desperately underfunded in comparison, and so this is what we have to live with for now. 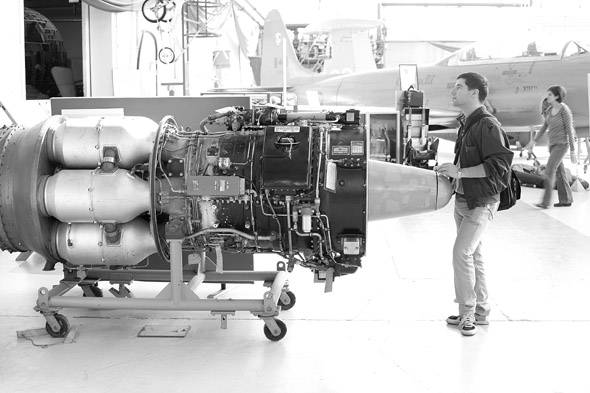 To the average Canadian, our country's air and space history probably feels only deep enough to warrant a science fair-caliber exhibition like the mezzanine here. But as I learned on this trip, we do have a proud, impressive and groundbreaking legacy here that demands more.

The meek metal, mirror and glue gun model of Canada's first orbital satellite does no justice to the proud fact that the Alouette made us only the third country to have scientific instruments in space, following the U.S.S.R. and the U.S.A.

It makes me a little emotional to think about (and this, I know, isn't just a guy thing, it's a Canadian human thing). And speaking of emotions, put that beautiful little thing in your mind, and read this quote from the museum's free pamphlet:

[The Alouette was] built to work for one year - a truly remarkable accomplishment at the time. It was still functioning ten years later. At that point it was remotely shut down. Alouette still orbits the earth. 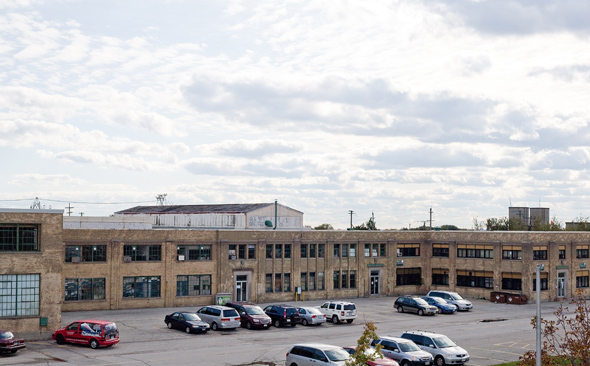 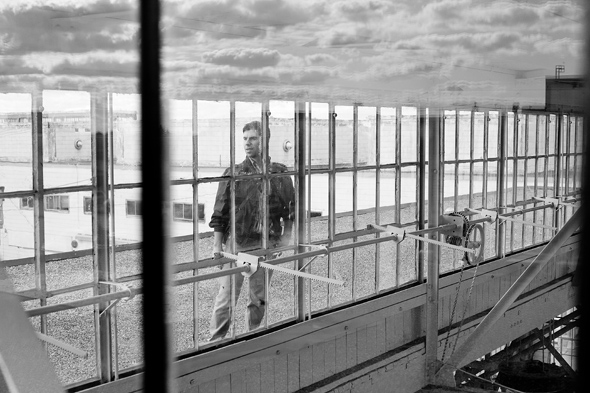