Bloordale Village has a new theatre to call home. The Sterling Studio Theatre, a 50-seat multi-purpose venue, occupies Unit 5 at 163 Sterling Road. The theatre is one of the newer additions to the thriving neighbourhood in the west.

It's a space that's already housed bouts of artistic energy. It was previously the recording studio run by Noah Shebib where Drake laid down his first two albums. Originally consisting of many small rooms, the theatre design includes a new stage, old-fashioned seating, sprung flooring, a lighting grid, and a technician's booth.

Kyle Labine, owner and manager of the theatre, endeavours to create a space that will host artists of all types: "I hope for Sterling Studio Theatre to become known as a spot for honest and impassioned artistry. There is so much fluff in the world of entertainment. When people come through our doors, whether to see a show, or to study, or for any reason, I want them to leave feeling more alive than when they entered. "

The Sterling Theatre and Film Society is the permanent resident of the building, and already has an inaugural season of plays underway. Artistic directors Sophie Ann Rooney and Angela Besharah plan to stage Canadian premieres of international plays, as well as fresh treatments of previously produced Canadian works. 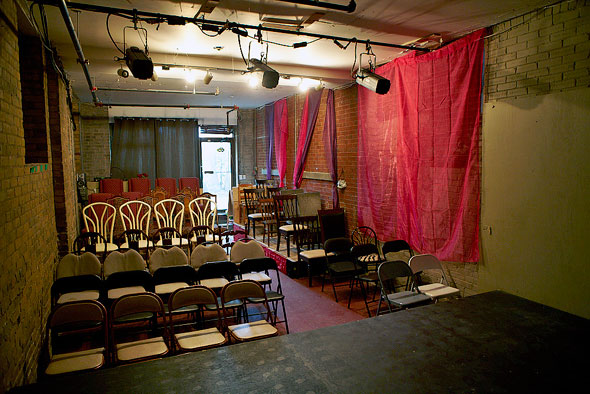 Their first was John Patrick Shanley's Danny and The Deep Blue Sea. Later this season, they'll stage N. Richard Nash's Echoes and The Glory of Living by Rebecca Gilman.

Owner Labine also plans to add a monthly Poetry Open Mic, film screenings, and private functions to the collection of acting classes already on offer at the theatre.

With its proximity to Roncesvalles, the Junction, and Bloordale Village, the Sterling Studio Theatre is well-positioned to serve as an artistic hub in a rapidly transforming part of the city.

Lead photo from Danny and the Deep Blue Sea, second photo courtesy of Inside Light Studio.