In this Toronto office everyone works in the dark

Toronto's filled with envy inducing office spaces that'll make you hate your window-less cubicle, unless you happen to work in one of these stunning spaces.

One of the newer spaces that fall into this category in Toronto belongs to Deluxe Entertainment subsidiary Stereo D, a company that converts 2D movies into 3D. 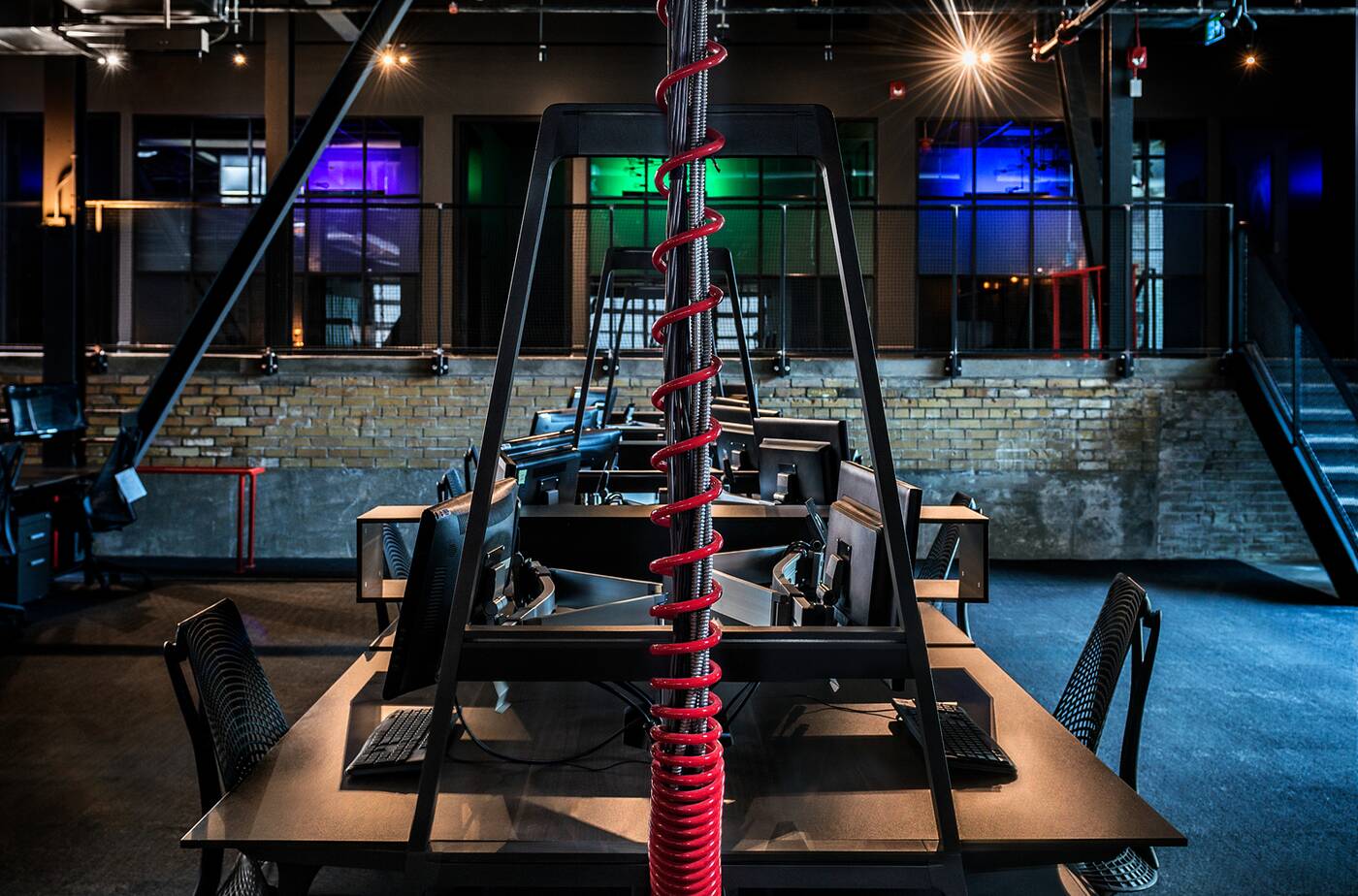 These coils are pneumatic hoses that accent the various wires that snake up to the ceiling. Photo by Bob Gundu.

It's worked on high-profile films such as War of the Planet of the Apes, Spiderman: Homecoming, Star Wars: Rogue One, Fantastic Beasts and Where to Find Them and the list goes on and on.

Much of the magic at Stereo D is done in the dark, so architectural firm Quadrangle was tasked with transforming the former Canada Bread Factory at 2 Fraser Ave. in Liberty Village into a suitable working environment. 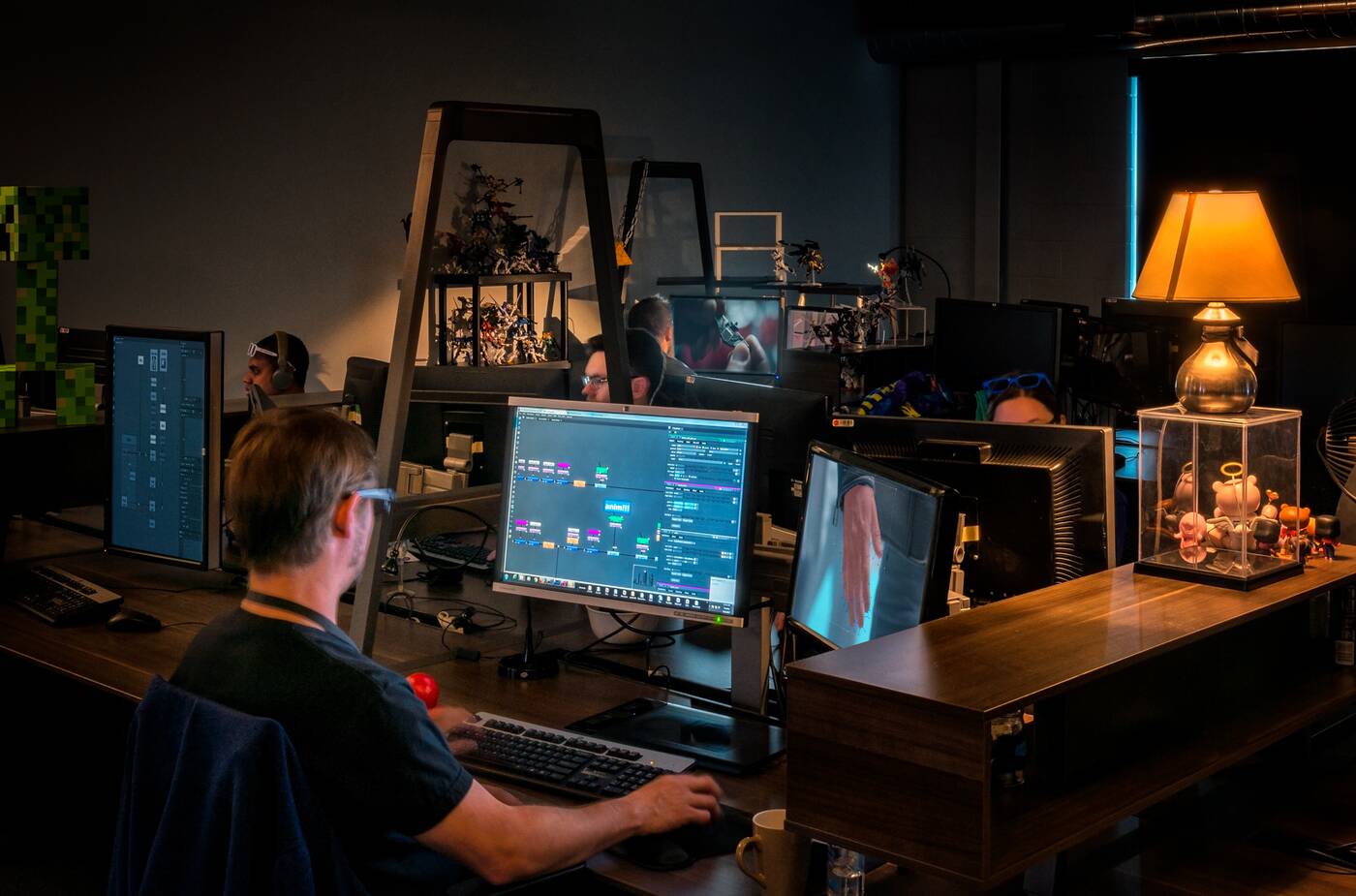 Co-lead designer Vera Gisarov says the project, which was completed in 2016, came with its challenges.

"It [designing for a dark space] really changes everything because you’re not in a typical bright and light tech office that you kind of see everywhere nowadays where everything is white and bright colours," she says.

Yet, Gisarov explains she and her team used these limitations to create a theatrical mood that fits right in with what Stereo D does. 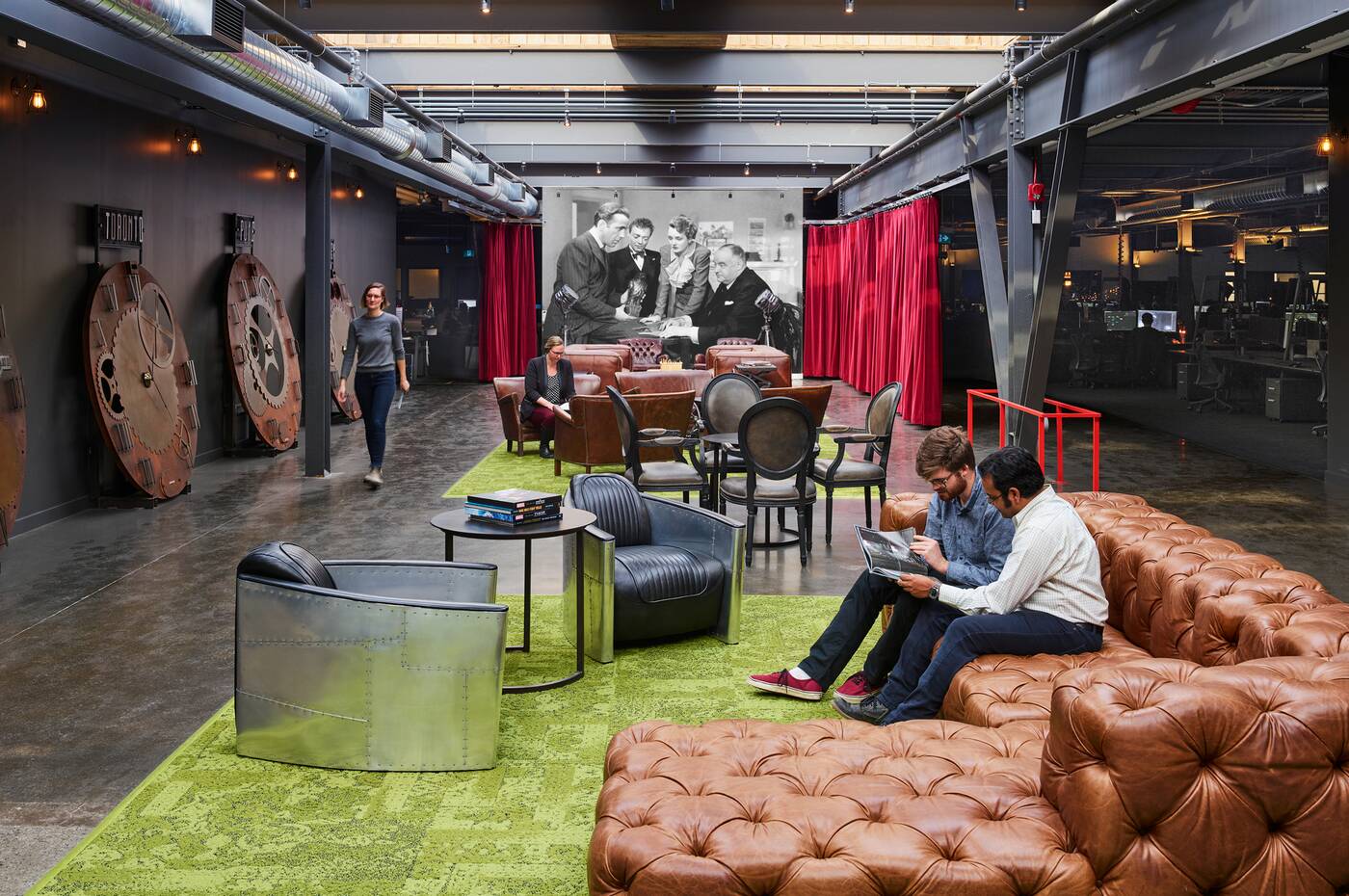 The office is situated in 45,000 square feet of a converted industrial building and Gisarov notes they wanted to let the building speak for itself. Elements from the structure's past are found scattered about, including the clocks made from the ends of the bread factory's old boilers. 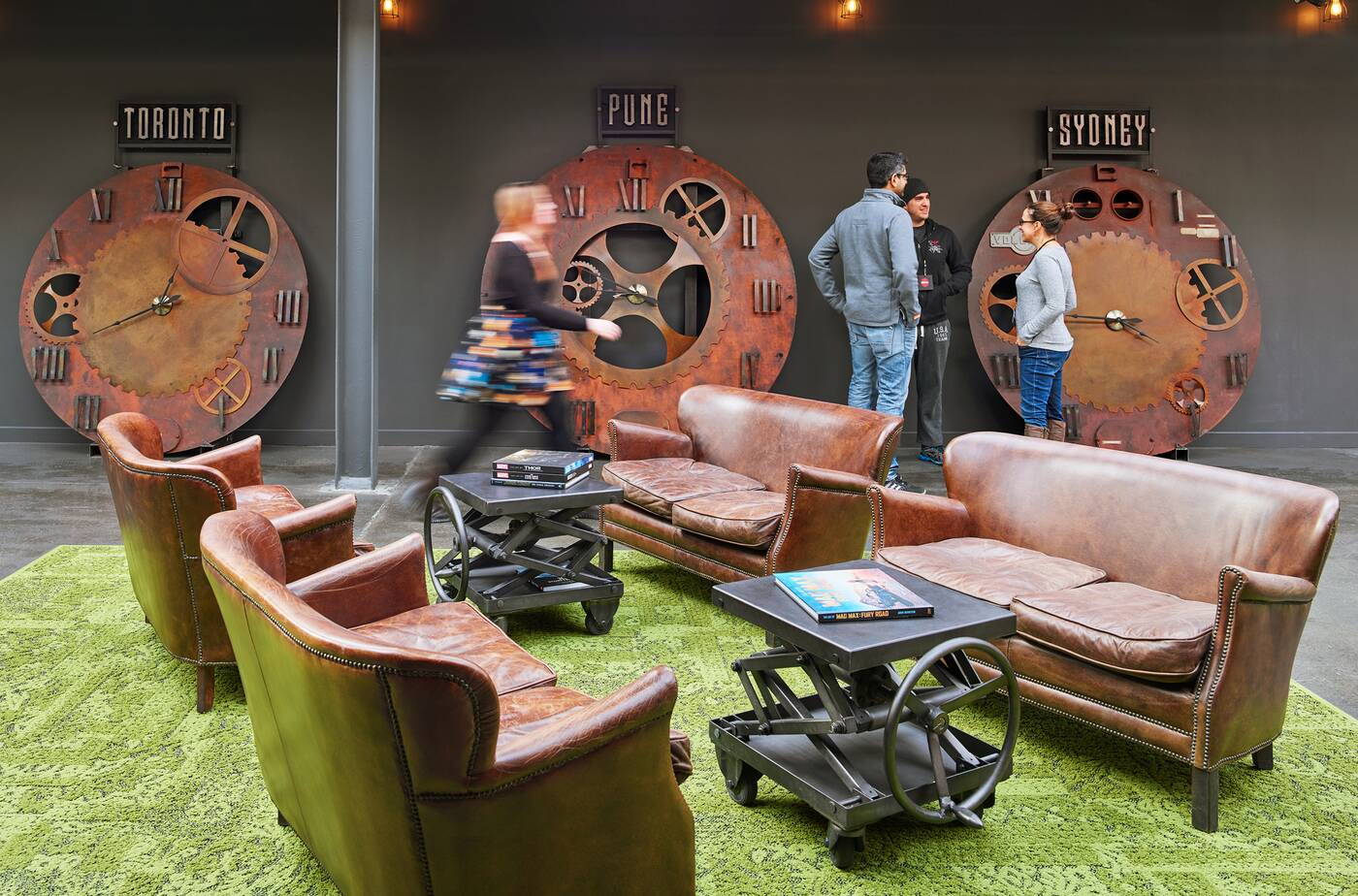 Gisarov explains this area is called Central Park (hence the green carpeting) because it's a meeting space that runs through the middle of the office. 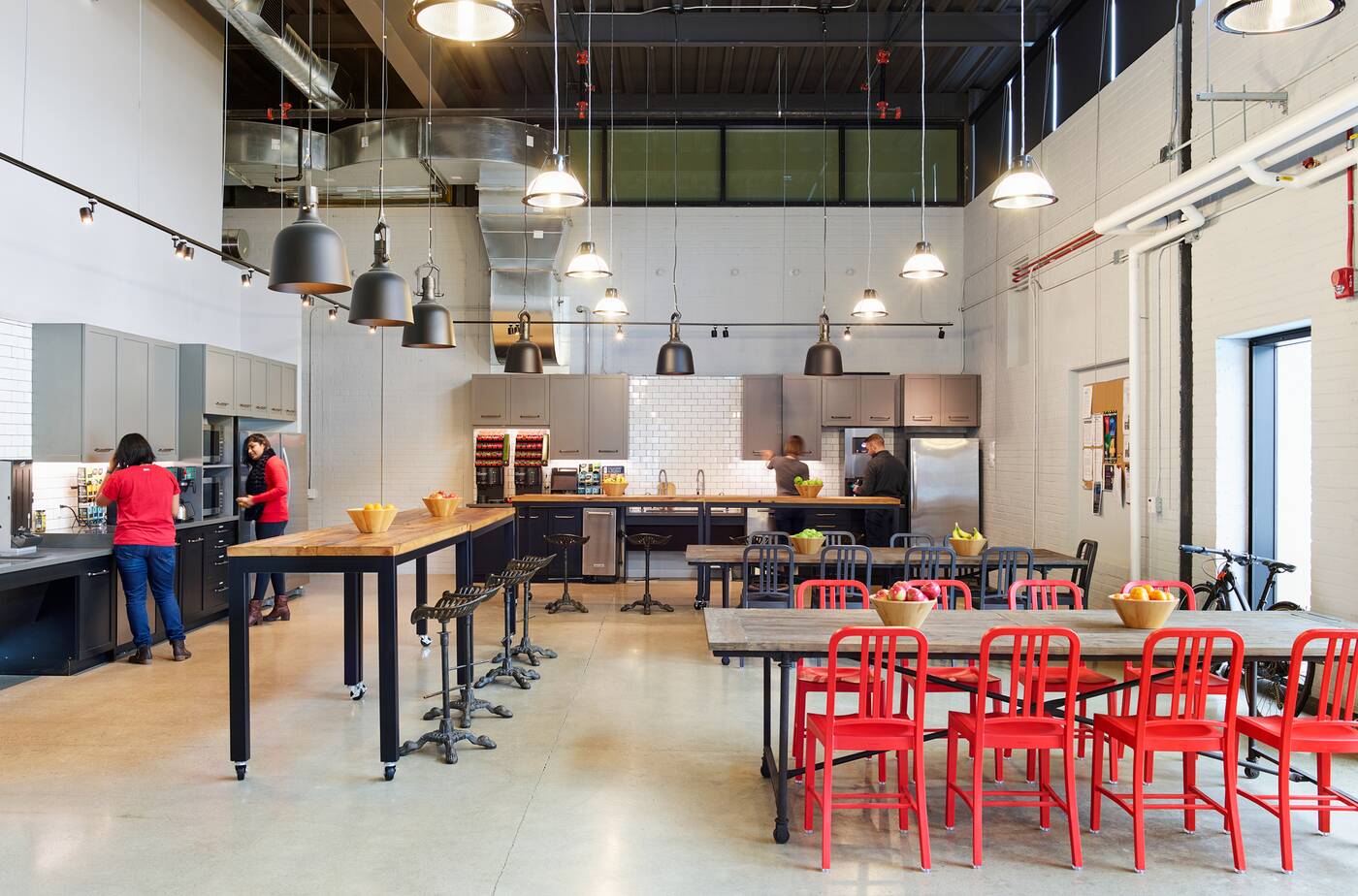 Like Central Park with its skylights, the kitchen has lots of windows. Gisarovs says this room, unlike other places, takes advantage of the natural light. Along with its high-tech and heritage features, the office also includes a lounge and of course, a screening room.

Stereo D has been in Toronto since 2014. Last year, the provincial government announced it'd be investing up to $4.5 million to support its expansion in Ontario.