Get to know a Toronto startup: SlingRide

Mike Holmes and the team at SlingRide aim to make the lives of Toronto's commuters a little less excruciating. Working out of the MaRS Discovery District as part of the JOLT accelerator, Mike and his team have launched a ridesharing community that is fully integrated into a user's social network. The site focuses on connecting people who are commuting in the same general direction and maps thousands of nearby coffee shops that allow drivers and passengers the ability to safely meet and coordinate rides in a simple and social way.

Here's what Mike and the team at SlingRide had to say about how they are re-thinking the Toronto transportation and ridesharing community.

How does SlingRide actually work?

SlingRide is first and foremost a ridesharing community for those who want a convenient way to travel while saving money and making new friends along the way. In order to use SlingRide, you must register using your email address and a social media account.

Once logged in to SlingRide, drivers can offer up seats in their vehicle, and passengers can submit ride requests. SlingRide makes use of thousands of Tim Horton's coffee shops across Canada as the pickup and drop off locations. Users select the closest Tim's to their starting and ending points using a simple map and their rides get saved into the system. These rides are then easily searchable by drivers and passengers who are looking for a match.

How does SlingRide differentiate itself from the other carpooling services out there like zimride?

There are several key differences between SlingRide and other ridesharing services. SlingRide focuses on the overall ridesharing experience - not just simply the initial matching. For example, when two people are exploring if they would like to ride together, they must coordinate or negotiate a place to pick and drop one another off along with the pricing.

By using coffee shops as the designated meetup points, SlingRide takes the meetup location out of the equation and simplifies the process. When a driver posts their ride, they specify how far they're willing to drive off their route and this information is easily searchable by passengers - the pricing, as set by the driver, automatically adjusts depending on pickup and drop of locations chosen by the passenger.

How are you addressing some of the most common safety and insurance concerns?

Driver and passenger safety is a huge concern and the research has shown that it's a major reason why more people don't rideshare. Simply put, the average person is afraid of getting into car with a complete stranger.

At SlingRide we have designed the entire experience with safety in mind. The first layer of safety comes from the fact that SlingRide doesn't allow anonymous users. Unlike sites such as Craigslist or Kijiji, all SlingRide members must provide a verifiable email address from an approved institution such as a university, college, or employer as well as a linked social media account.

Other site features were designed as a result of getting direct feedback from potential users. For example, when talking with female drivers and passengers, it became clear that many would feel more comfortable riding only with people of their own gender - so we built this capability into our search and ride posting filters. 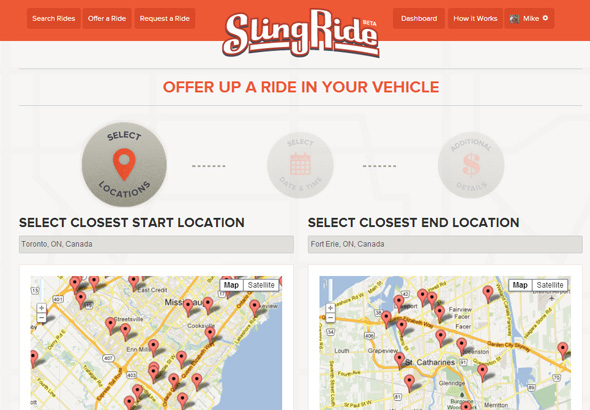 With the legal headaches Uber is encountering in Toronto, are there any laws in Ontario that SlingRide might have to deal with?

It is always important to understand the laws in the geography where you're launching. In the past, there have been several Canadian ridesharing companies that have faced the threat of legal action -these small companies were usually strong armed by lawyers from the large motor coach operators.

Specifically for SlingRide's operations in Ontario, the Countering Distracted Driving and Promoting Green Transportation Act of 2009 provides a broad enough definition of carpooling/ridesharing for us to stay in the clear. It's important to note that SlingRide isn't actually providing transportation - in a way we are not much different than an old-school ride-board where people put up information. The difference is that SlingRide is leveraging social media and advanced mapping technology to provide a far better platform to find people heading in the same direction.

Tell me about the business side of SlingRide. Is there a cost to the consumer? Where does your revenue come from?

It's pretty straight forward, drivers set the price for the space in their vehicles, and passengers are able to pay drivers online using their credit card via paypal. In the process of transferring these funds SlingRide takes a small service fee for providing matching services. Later on, once the SlingRide network is built up, we will explore charging companies in order to provide their employees with access to the SlingRide platform.

What are the next steps for SlingRide?

The initial market we want to focus on is the university and college segment (as well as recent grads). This segment understands technology, spends their money wisely, and is environmentally aware.

As far as news, I am really excited this January to be launching at Brock University with the Brock University Student Union during their annual 'Frost Week' .The BUSU is a forward thinking student organization and committed to providing their 18,000+ students with environmentally friendly and affordable transportation options. I believe the fit between the BUSU and a service like SlingRide is excellent and look forward to working with Brock's student leaders.