Every month my wireless bill is like a guessing game. What will be it be this time? Data roaming charges from traveling abroad, which have made my bill as high as $900? Long distance charges? Going over my weekday minutes? I know I'm not alone - every time you bring up wireless carriers someone has a horror story about a sky-high bill or terrible customer service.

Wireless carrier competition is fierce in Toronto right now, with companies offering incentives like TTC passes to new customers. But for someone like me who's locked into a contract with no end in sight, it's not about what the other guy can give me - it's about how I can work with what I have, no matter how painful. So when I learned about Toronto company MobileVantage I was intrigued. The company exists to fight the good fight for consumers - they negotiate your wireless plan and shop around for the best deals, saving consumers the hassle and taking a cut of the savings.

The company was started in May 2009 by friends and former summer camp colleagues Ted Gorsline and Griffin Thomson. Gorsline got the idea for MobileVantage while working for a small manufacturing company in his hometown of Port Hope. He managed their wireless accounts, and said the frustration he experienced was a big motivation.

MobileVantage offers a three-step process for consumers. First, the company reviews your billing history to figure out your patterns (hello Netflix data overload!) and current rates. Then they do the dirty work - enduring the painful hold music and maze of customer service reps to negotiate with your provider - and deliver a plan outlining their findings. You choose the amendments you want to make to your plan, and the company takes 50% of your savings for the next 8 months. So if you were paying $120 and are now paying $80, you would pay the company $20/month for eight months. 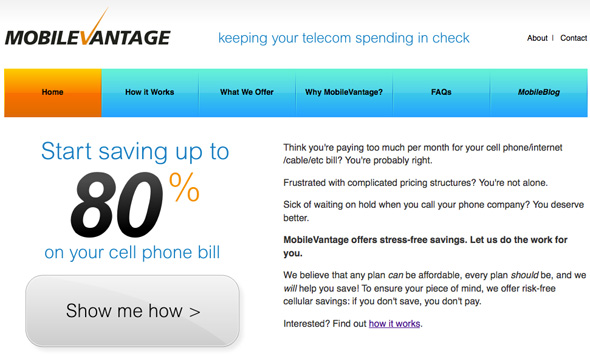 While Gorsline says anyone with a cell phone could be a client, his main target demographic is small business owners and independent professionals. "As a small business ourselves, we know how important cutting costs are, and we know how much of a difference saving several thousand dollars a year can make," he says." Real estate agent Heather Hadden is one of the company's small business clients - Gorsline says she was routinely paying over $300 a month, and they negotiated the bill down to $80.

The site advertises (in giant block numbers) that they save you up to 80 per cent off your bill, but heir average savings are 45 per cent, which is still significant enough. Gorsline says the savings they find are worth the per cent the clients have to hand over. "Given that we share in the savings for a fraction of the cell phone contract's entirety we believe that we offer positive value for service," he say. "And the flip side of that is if you are already on a great plan and if we can't save you anything, there is no cost." Since MobileVantage's launch in the summer of 2009, Gorsline and Thomson have started building their social media properties, and recently redesigned their website.

For consumers who want to get their plan right from the start there's MyCellMyTerms.com, a company that allows you to set your plan's criteria and price limits - they shop it around to their dealer network and allow you to choose the one you like best (they also help businesses reduce their current bills).

As for the option of shopping around and negotiating your plan yourself, that can certainly work as well -- and it's good to remember that it's often possible to do so. But the fine print and hidden costs are Gorsline's biggest selling point. "It is often rather startling to see the variety and magnitude of erroneous charges that aren't readily apparent and get hidden in Canadian cell phone bills," he says. Whether people will be happy to hand over their savings to have someone else find those erroneous charges is, of course, another question.