NXNE gets Interactive for the first time

The South by Southwest Interactive conference is one of the hottest technology events of the year. Each March thousands of entrepreneurs, geeks and tech addicts from around the world gather in Austin, Texas to play with new gadgets, attend panels, and take in keynotes from some of the technology industry's biggest names (like Twitter's Evan Williams), and of course eat some barbecue.

The Canadian version of SXSW, North by Northeast (NXNE), is now in its 16th year. And while Toronto has had the northern equivalent of SXSW for years, this marks the first year they added an Interactive component. It begged the question: do we need another tech conference, eh?

With the quick sell-out of the event last week, the answer seems to be a resounding yes. The conference featured a keynote from Ze Frank; panels on design, social media and the future of music (which included Aidan Nulman of recently-launched startup YouPhonics); and networking events.

I moderated a panel on Day 2 on the rise of the mobile worker called Work Anywhere. The panelists were Rachel Young, local entrepreneur and founder of Camaraderie co-working space; Jayna Wallace, a senior UX designer for Blockbuster; and James Eberhardt, the founder of Echo Mobile. We talked about tech tools that mobile workers rely on (Dropbox was a favourite), the ups and downs of working from home, and the benefits of co-working spaces. 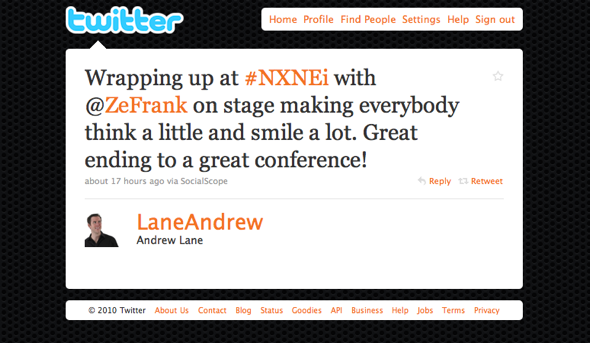 Overall the feedback from attendees was positive - panelist Andrew Lane said it was one of the best conferences he's attended in the last year or so, and that with the exception of a couple panels, the content was top-notch. Check out a video from local video blogger Sean Ward about Day 1 of the conference:

While the Interactive content may be all wrapped up, the parties are not. Toshiba is holding The Primer Party on Friday night at Ultra Supper Club for Interactive attendees. The event will feature DJ Jai Johnson and a laptop mini-museum (because that makes a party, right?), and of course free drinks.

There's only one thing I can think of that SXSWi has that NXNEi didn't even come close to, and that's amazing barbecue. So if you're craving some brisket and beans head over to Highway 61 Southern Barbecue for your fix. And if you missed Interactive, you still have time to catch the music and film portions (check out our preview of shows)