Twestival (Twitter + festival) is the original Twitter-organized party. It originated in London, England in September 2008 with a small local meetup, and organizer Amanda Rose quickly realized the potential and has since turned it into a global phenomenon. Toronto has been a key host to Twestival events over the past year, and the team of volunteer organizers is ready to throw another event this week.

The first Twestival Global was held on February 12 2009 in over 202 cities worldwide, and all money raised (over $250k) went to charity:water to build wells in developing nations - over 55 wells were drilled in Uganda, Ethiopia and India. The first Twestival Toronto was held at CiRCA nightclub and had over 500 people in attendance - many of them part of Toronto's avid Twitter community (although being a fan of the little blue bird wasn't a requirement). The event raised over $10,000 to contribute to the global efforts.

Due to the success of the first event, a second global Twestival was held in September 2009, this time raising money for a local charity in each of the 130 participating cities. Toronto's charity was Meal Exchange, a student-founded, youth-driven, charity that addresses local hunger by mobilizing students. The event was on a boat in the Toronto harbour (sans T-Pain, unfortunately). 350 attendees raised over $6,000, and all in all over $450,000 was raised globally for each city's local charity. 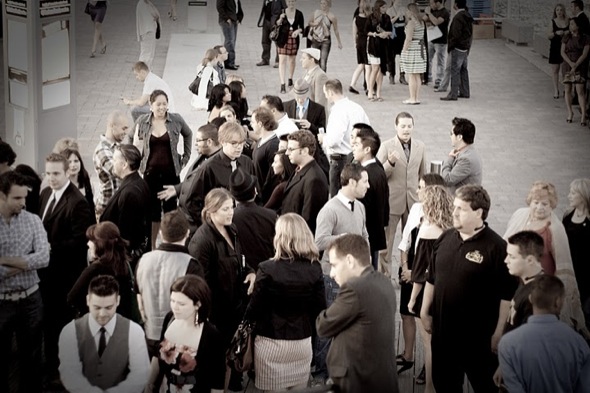 Twestival is hoping that the third time's the charm. This Thursday the third global event will take place in hundreds of cities around the world, Toronto included. The charity is Concern Worldwide, an international organization that works to reduce suffering and end extreme poverty and is devoted to educating the 72 million people worldwide who don't have the opportunity to go to school. The event is taking place this Thursday at Tryst Nightclub (82 Peter St.), and over 350 tickets have already been sold. And the fundraising is already exceeding the goal - over $15,000 has already been raised through sponsors and ticket sales.

So what do you do at a Twestival Toronto? Well, Tweet obviously. Local startup ScribbleLive will have screens around the venue displaying the livestream. Also lead sponsor WIND Mobile will also have a dedicated lounge where you can meet some of the team and perhaps wrangle yourself a better deal on a cell phone. You can also dance to the stylings of local DJ @modernmod, and perhaps win a raffle prize (including Flip video cameras).

You might be a huge fan of Twitter like me, or you might think it's the stupidest service you've ever encountered. But either way everyone can agree on raising money for a good cause. You can buy your ticket to Twestival Toronto for $20, 100% of which goes directly to the charity. If you can't attend but want to know what all the fuss is about make sure to search the #TwestivalTO hashtag on Twitter on Thursday night to see how Toronto's Twitter community can throw down.

Disclosure: I'm on the organizing committee for Twestival Toronto.