Advertising Gets a Little More Wonderful

It's said that one of the first things to go during a recession is advertising. And while watching technology shrink to previously unheard of sizes may excite some people, seeing newspapers do the same most definitely does not.

So amidst the burning wreckage of falling publishers and apprehensive advertisers, there's one man who has sat relatively unscathed. You see, this man is named Ryan North - and he comes from the Internet.

"It's interesting, actually. I haven't noticed much of a difference in Project Wonderful," he explains, pausing for a moment.

"In fact, I think we're actually doing better than we were a few months ago."

And surprisingly, he's not the only one. In fact, sources like Wired have gone so far as to declare online advertising the one market that will remain untouched by any recession.

"I think maybe people are moving more to advertising online, where the rates are cheaper," North continues, adding, "you can measure your response rate more accurately as well."

And while Project Wonderful has proved that it can weather almost anything the recession has thrown at it thus far, the service, in fact, has much bigger goals. Dissatisfied with what North refers to as the "broken" state of online advertising, it's his hope that Project Wonderful will not simply change the online landscape, but change it for the better.

"If we're reinventing it now, looking at the past ten years, what would we do differently?" explained North of Project Wonderful's goal.

Of course, by now you're probably wondering what exactly there is to fix. The general consensus, at least, amongst those I know, seems to be that advertising services like Google Ads are the way to go when it comes to making money online. But that's exactly the sort of thinking North hopes to change.

"The main issue is that ads are sold in terms of clicks, or displays, so you [the advertiser] pay for every click or for how many displays you get," says North of the current state of online advertising. "But the net's not really designed to track who viewed what site where, and who clicked when."

By now, intrepid users may see where this is going. If advertisers are paying per click, then as a competitor, all it takes is a lot of free time and dedication for someone to keep clicking those ads over and over - a move that only costs advertisers more money. 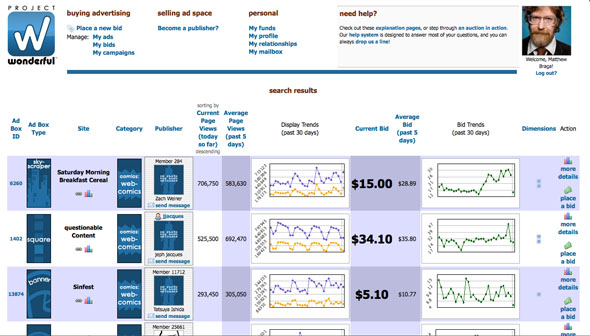 "It's sort of the industry's dirty little secret, because everyone who's selling this is trying to fix it with varying degrees of success," North explains, in reference to such instances of advertising abuse, known in the industry as clickfraud. "I mean Google has the smartest people in the world working for them and they can't solve it. They can mitigate it and do their best, but it's not going away."

"By charging for advertising time instead of clicks, you've actually solved the problem by eliminating it."

After all, the best way to solve a problem is to prevent its existence in the first place, a fact that North is obviously aware of. And as it turns out, it's a fact that thousands of Project Wonderful's publishers and advertisers are aware of as well.

The size of its user base is even more impressive considering the service's success has relied entirely upon word of mouth.

"I launched Project Wonderful just by putting it on my site. And that's the only advertising I ever did," says North of his project's humble beginnings. "So it's all from people reading the site and saying what's this, and then clicking the link, and then applying."

It probably helps that North also runs one of the internet's most popular webcomics, Dinosaur Comics - which, he jokingly adds, proves the power of celebrity endorsement.

But its clear that the site's success has been for good reason, and is perhaps a sign that the landscape of online advertising is beginning to change. Or, at the very least, the system offers a far more successful pricing structure than its competitors.

"With Project Wonderful we take 25% [of sales] which I think is the lowest in the industry; I haven't seen anyone go any lower," explains North of the service's pricing structure. "Our prices are lower, giving more to the publishers, so that they're actually making more from us than anyone else."

"It means we make less money, but I guess I'm not a very good entrepreneur," he jokes."

"My plan isn't let's not make money, it's let's do this better."