From February through October, you're likely to see long lines of sports fans queued in the streets and parking lots of Exhibition Place to see an Argos or Toronto FC game at BMO Field.

Steps away from the soccer and football stadium's beer-soaked bleachers, a few relics tell the story of another lost stadium, perhaps the most important one in Toronto's history.

Exhibition Stadium was somehow both great and terrible. It lives on in old-timers' memories as a nostalgic contradiction, remembered both as a "mistake by the lake" and one of the most important buildings in Canadian sporting history.

The fourth stadium to exist on the Ex grounds, the final Exhibition Stadium was constructed piecemeal over roughly three decades, and it showed in the design.

It started with the replacement of the earlier Exhibition Place grandstand in 1948, expanded a decade later into a full stadium and taking on the name it retained from 1959 until its demolition 40 years later. Its final significant renovation came in 1976 in preparation for the Toronto Blue Jays' inaugural season.

It was a somewhat decent venue for the Toronto Argonauts of the Canadian Football League, who called Exhibition Stadium home from its 1959 opening until 1988, but its seating configuration was not well-suited to baseball.

The Jays played in the stadium from their inaugural 1977 season until 1989, moving to the then-new SkyDome along with the Argos after a long-fought campaign to have an enclosed, multipurpose stadium built for Toronto.

Exhibition Stadium's final curtain call came just one month into 1999, reduced to rubble and converted into parking space a decade after its flagship tenants vacated the venerable venue.

Eight years after the stadium vanished, a new stadium rose from the northern half of the venue's former footprint, Toronto FC and Argos games now being held on the same hallowed ground where legends like Tony Fernandez and George Bell once belted line drives to cheering crowds.

It may be gone and replaced with what is technically the fifth Exhibition Stadium on site, but traces of the first home of the Blue Jays are still visible to this day, over two decades after its demolition.

You don't even have to visit the stadium site to get a sense of where it stood, as the darkened outline of the infield, home plate, and sections of the stands are all clearly visible atop parking lots in even the most recent satellite imagery. 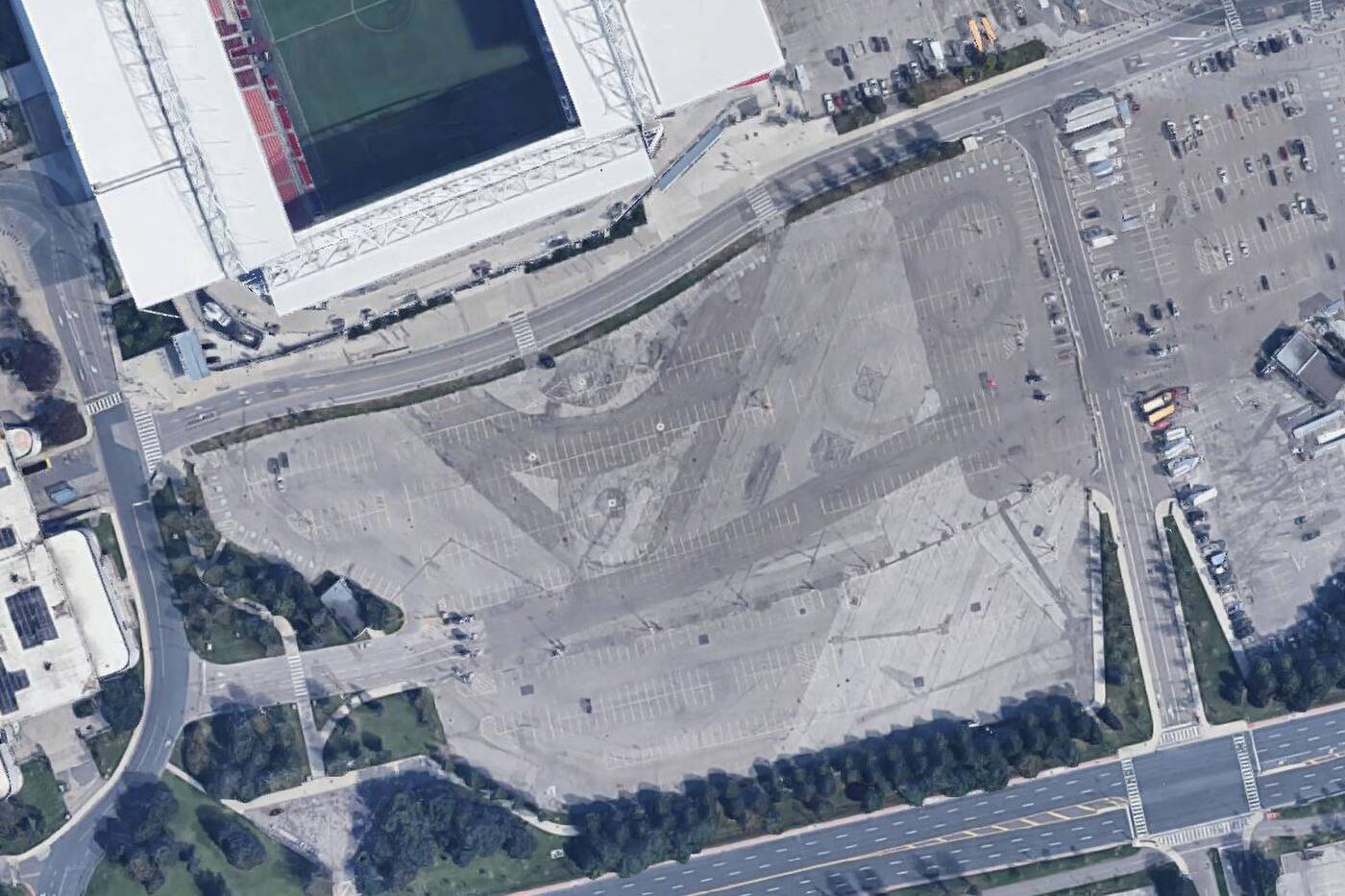 The outline of the stadium's footprint is still evident in satellite imagery, even 23 years after its demolition. Photo via Google Maps.

But there are even more cues for those willing to wander into what is now little more than a parking lot abutting Princes' Boulevard. 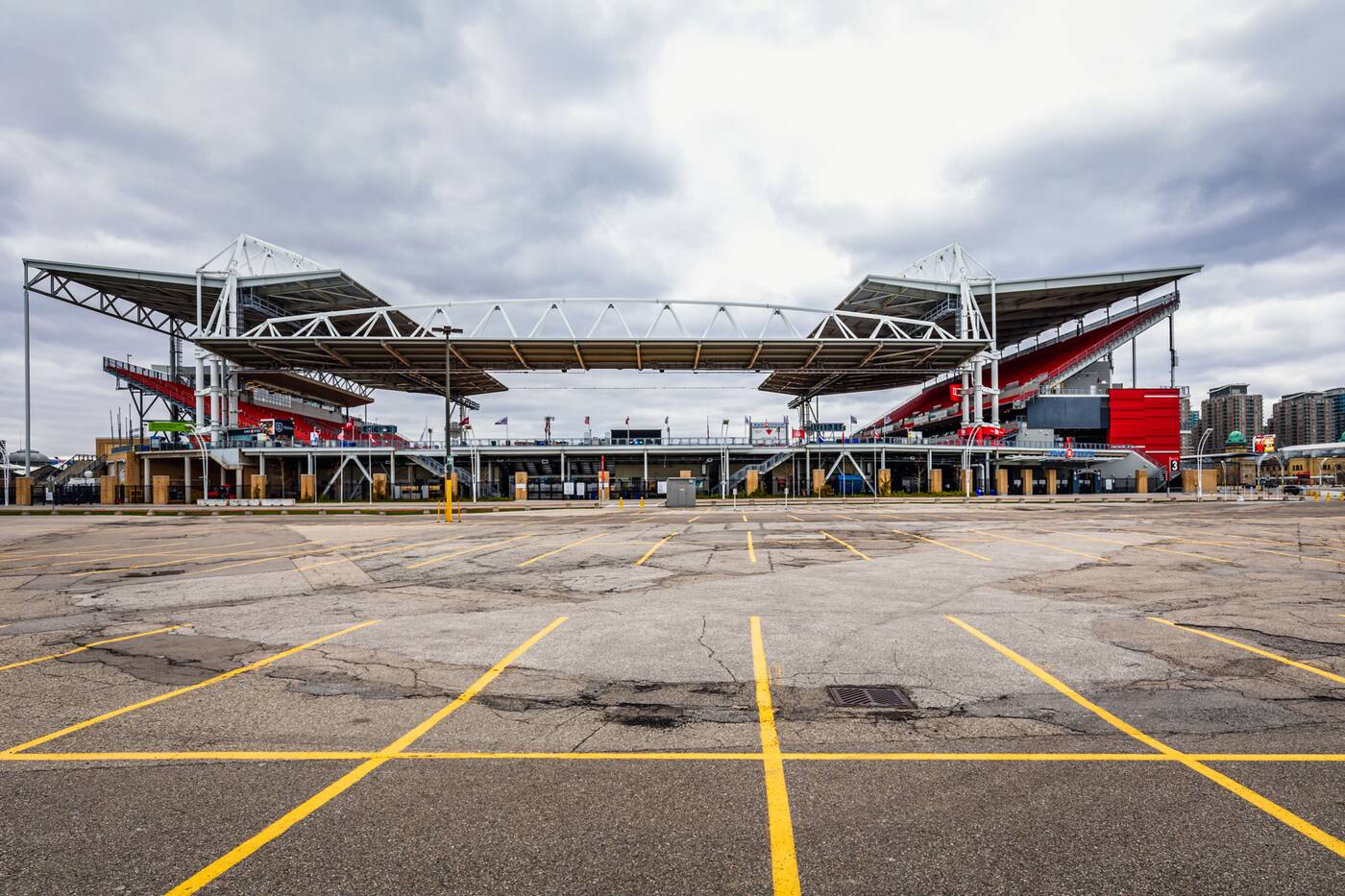 Facing north from the approximate position of the first row of seating behind home plate. Photo by Jack Landau.

All of the positions of the former bases, including home plate, are marked with large concrete pavers housing stone plaques engraved with the names of the bases. 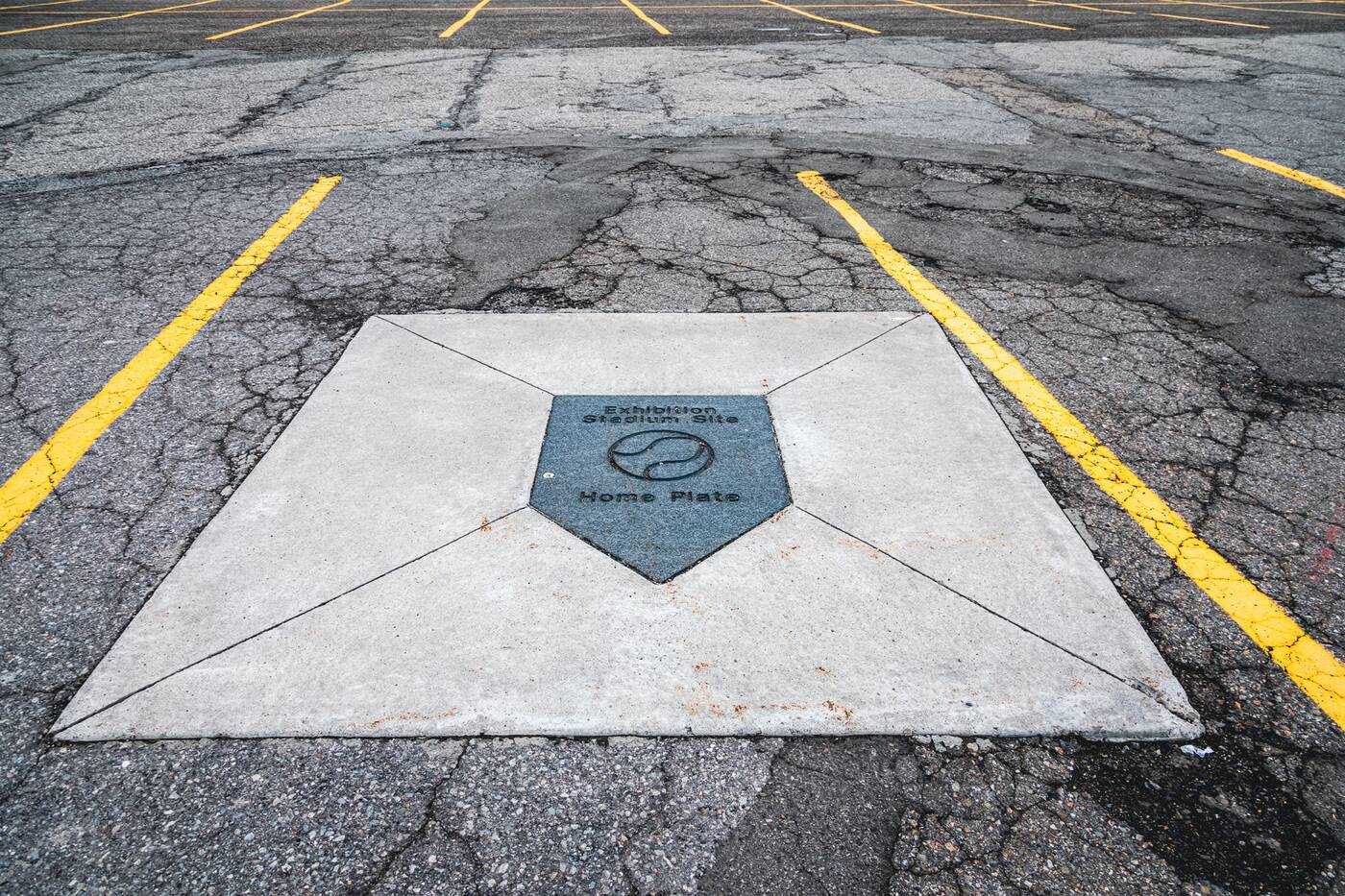 You can park your car in the same spot where legends like George Bell and Kelly Gruber belted out hits. Photo by Jack Landau.

They're so subtly placed, you'd almost have to know they were there to even find them. 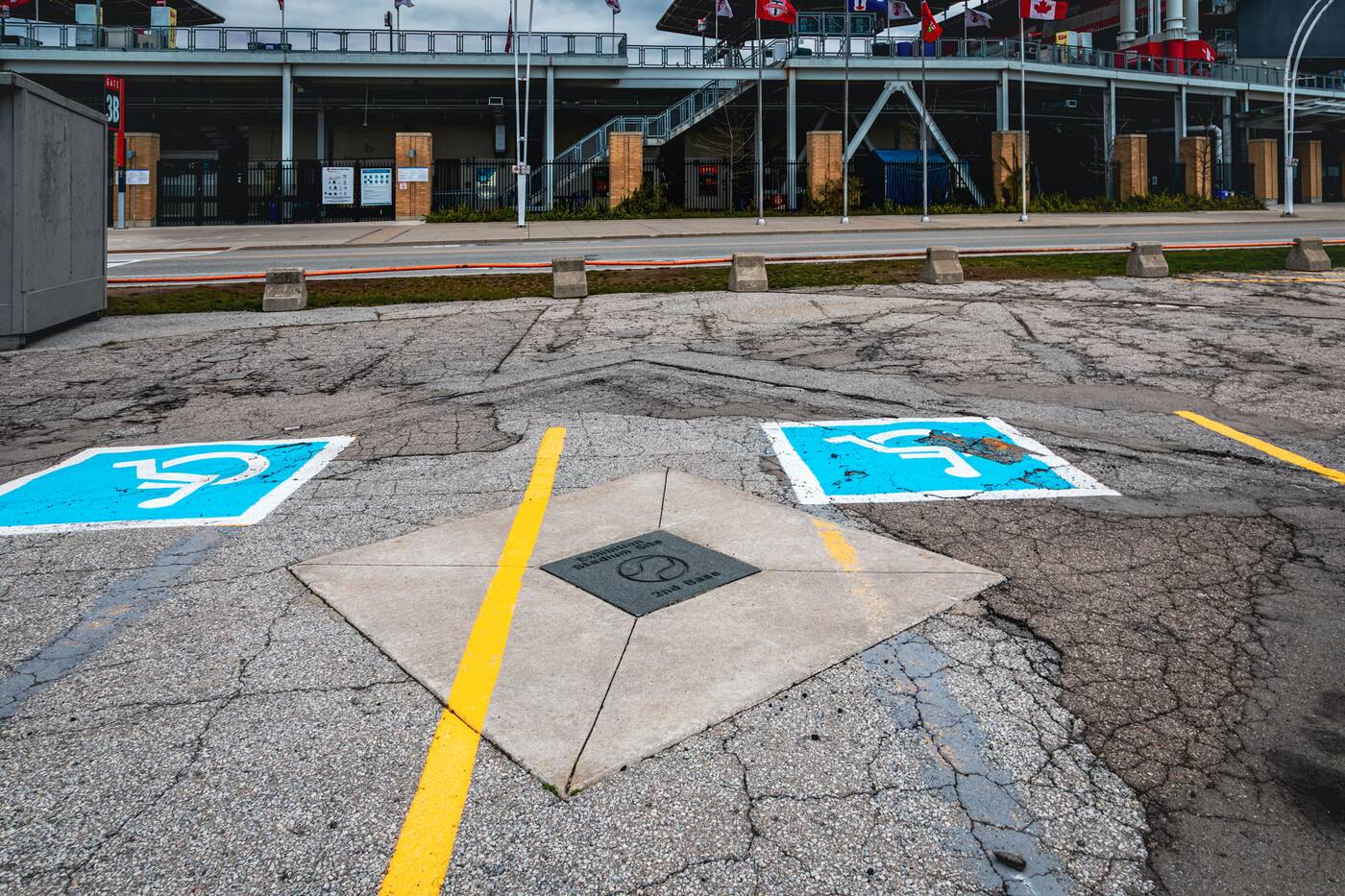 It's a nice touch that you can still run the same base path that greats like Kelly Gruber turned into legends, but the plaques don't really offer much in the way of history for a site that holds such great importance in Toronto sports lore. 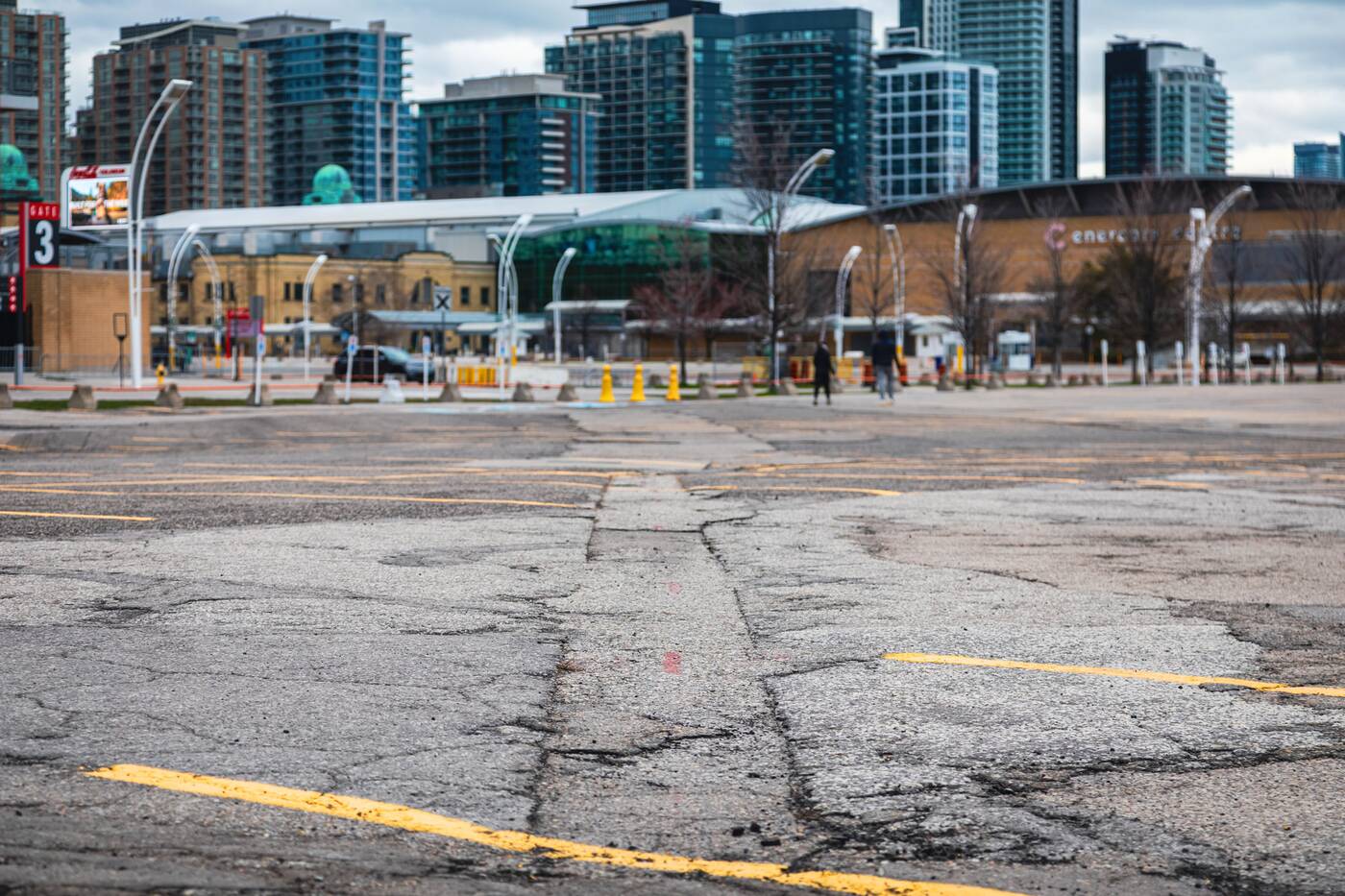 Looking from home plate along the former first base path, still evident in the crumbling asphalt parking lot that occupies the stadium footprint. Photo by Jack Landau.

Even the former Maple Leaf Stadium site at the foot of Bathurst Street, which hosted a minor-league ball club until its demolition in the 1960s, has a lengthy plaque in its honour on site, though no other trace of it remains. 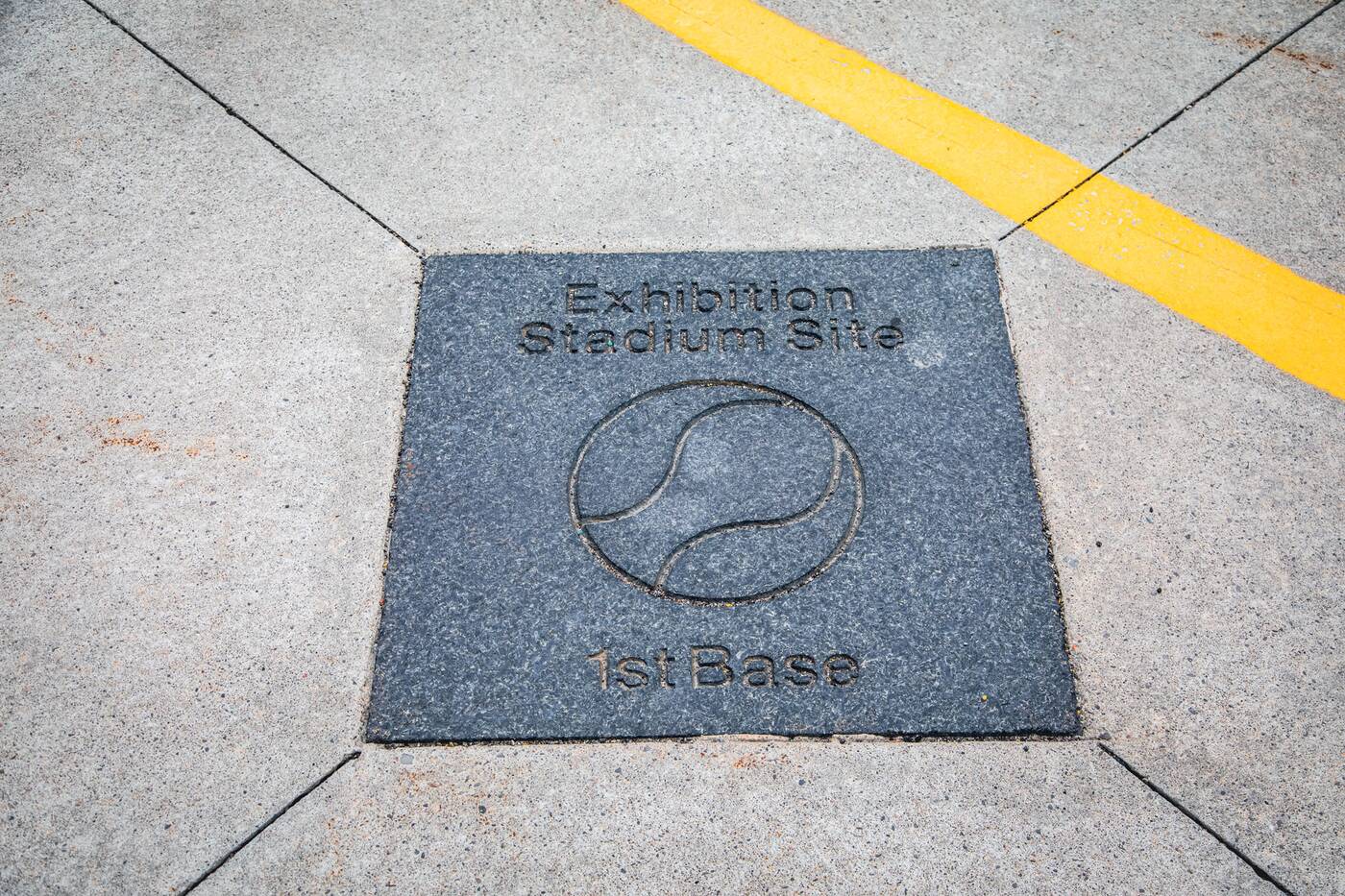 A plaque on the position of Exhibition Stadium's first base. Photo by Jack Landau.

Similar to the Exhibition Stadium memorial, another set of stone bases (though not to scale) marks the location of the former Sunlight Park, or the Toronto Baseball Grounds, which operated from 1886 to its 1913 demise.

Known as Riverside Common Park, the space was built as part of a recent condo complex, and is Toronto's most recent baseball memorial.