This Raptors season has been the stuff that sports dreams are made of, and no matter how it ends tonight, there've been a bunch of iconic moments worth celebrating.

There's Kawhi's quadruple-bounce buzzer beater in Game 7 against the 76ers, or the image of VanVleet's tooth sitting on the court floor Friday evening during Game 4 against the Warriors.

It's the stuff art muses are made of, and a popular Toronto artist is immortalizing it all in her artwork.

Illustrator Sarah Brown, more commonly known as Drake Cereal, has been immortalizing all the greatest Raptors' moments from the beginning of the series.

The 28-year-old has been a huge Raptors (namely, DeRozan) fan since moving to Toronto from Victoria in 2009 (and, evidently, she's a Drake fan too).

Her Jurassic Park series features a bunch of super cool plays on Raptors moments and some Drake songs.

The Started From The Bottom print is basically a round up of #WeTheNorth moments, including Kawhi's weird laugh and a reference to the Toronto rapper's infamous Nick Nurse massage.

Of course, Kawhi's four bounce play gets its own poster.

A personal favourite: a rendition of Matisse's The Dance, but with Leonard, Lowry, VanVleet, Powell, and Siakam instead of the circle of butt-naked dancers.

"We earned this and I want to remember these moments as they're happening," says Brown. "I still can't get over Fred VanVleet's tooth; what a beast."

A self-taught illustrator, she even turned down a recent offer from the sports site Bleacher Report to make some artwork of The Warriors taking the Finals. 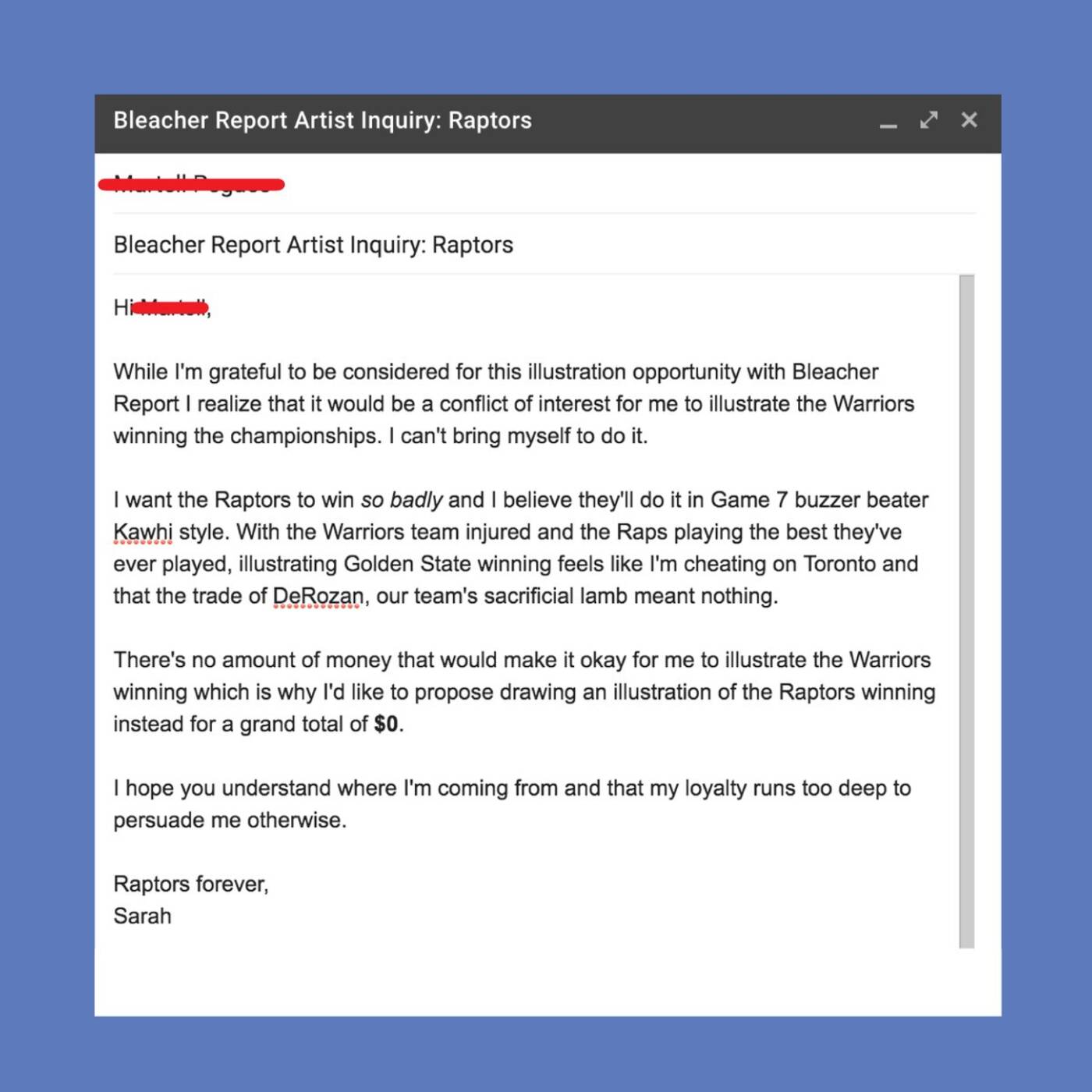 Illustrator and Raptors fan Drake Cereal turned down an opportunity to illustrate for the Warriors for The Bleacher Report. Photo c/o Sarah Brown.

"While I'm grateful to be considered for this illustration opportunity with Bleacher Report I realize that it would be a conflict of interest for me to illustrate the Warriors winning the championships. I can't bring myself to do it."

She even offered up a free illustration of the Raptors winning instead.

"They gave me kudos for my loyalty to the Raptors but passed on the free illustration," she says."It's their loss and I'm looking forward to working with them in the future after the Raptors win."

You can't buy that kind of loyalty.