Last night the Toronto Maple Leafs won the Intercounty Baseball League championship 13-5 at Christie Pits in the final game of the best-of-seven series. They defeated the defending champion Brantford Red Sox and claim their first title since 2002.

It was my first game at Christie Pits, and it was a refreshing change from the omnipresent concrete of the Rogers Centre. The night was beautiful, the crowd was massive, but it's just a shame it was the last game of the season. I've already added Maple Leaf Baseball to my summer of 2008 list of fun free things to do in the city. You don't even need to be a sports fan to have a good time. Many people just treated the grass slopes as a massive patio shared with a few thousand others, brought along a few beverages and a couple lawn chairs and enjoyed the night. People watching/listening is as fun as the game, oh, and bring the dog too!

And if you ever played little league baseball, you'll probably run into your coach at the game. I did. Seriously. Killer mustache and all.

My people watching favorite: the "I'm going to go shirtless to try and get rid of my farmers tan even though it's a night game" guy. Maybe that's why he has a farmers tan? 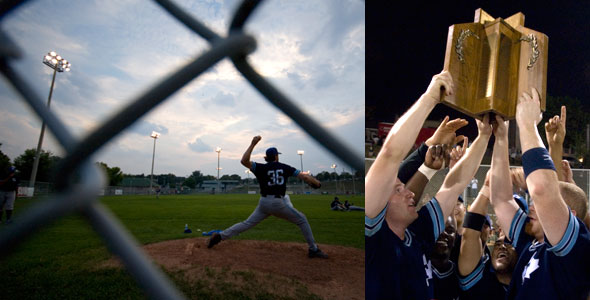 Cheers/taunts overheard at the game included the classic, "Come on Joe, show 'em where you live," the pre-classic classic, "Here comes the hit parade," the insult their best player by making fun of his lack of a position, "More like designated bus-driver," the Ludacris, "Down up front," the complex yet simple, "Go Leafs Go," the confusing and questionably inappropriate/appropriate "Easy-peasy low and sleasy," and 15-straight minutes of "Mul-let, Mul-let, Mul-let" which was in response to the final Brantford pitcher who had, well, a mullet. The best thing about any cheer at Christie Pits is that the players can actually hear them - the mullet cheer was particularly effective, almost as effective as 'Dar-ryl.'

Two rules I should warn you about before you venture on your own next season. I learned the hard way.

1) You can't keep the foul balls, no matter how spectacular/embarrassing it was to get it. Once you have the ball, young children will run up to you to ask for the ball. Give the ball to these kids not because you think you might rack-up 'nice guy' points with your date, but because that's the kids job and you'll be kicked out if you don't.

2) Do not under any circumstances stand in front of someone who looks like they might have season tickets. Season ticket holders are usually identified by their knowledge of players' names, and most of the ticket holders are old. They can be really cruel if you stop for even a moment in their field of view. Cruel I tell you! You've been warned.

In case you haven't been to the park, bring a blanket or chairs to sit on the grass. You might also want to wear comfortable shoes, as the hill is really steep. Only disappointments: bathrooms all the way behind center field, no vendors in the stands.

It's where little league and big leagues meet happily and perfectly.

Tell me you've ever seen this at a baseball game: Pitcher Paul Spoljaric (former Blue Jay) gives up a home run to Lee Delfino that ties the game 3-3 in the fifth inning. Delfino tosses his bat triumphantly and starts rounding the bases like he's just hit 766. Spoljaric actually follows Delfino AROUND THE BASES, like right up in his face, chirping at him the whole way to home plate. The Leafs followed with four run in the bottom of the inning.