Riders Cycle and Board is currently open but their offerings and services may be affected due to the pandemic. Please contact the business directly for more information about any changes. Is this your business? Please contact us if you would like to update this message.

Riders Cycle and Board is the quintessential neighbourhood bike shop. Owners Jeff Ubalde and Valentine Tomlinson know many of their customers by name, and you can regularly see them waving at riders passing by their two stores, the more recent of which opened in spring 2016. 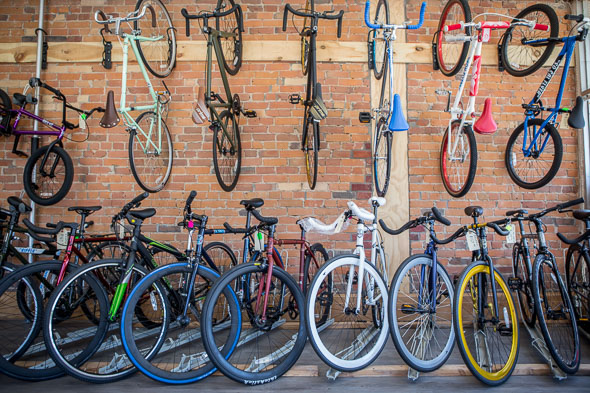 The original shop at Geary and Dovercourt is still open, but the hours have been reduced since Riders took over the space formerly occupied by an old variety store on Harbord just east of Ossington. Now the Geary shop functions more as a repair centre, while the second shop is home to the better selection of retail stock, be it bikes or accessories. 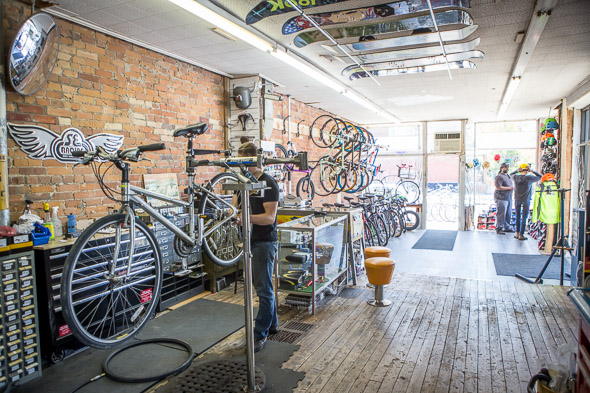 That's not to imply that the Harbord shop doesn't do repairs. On the contrary, it's actually the busier of the two stores, but Ubalde and Tomlinson thought it was important to maintain a presence in the neighbourhood where the store started, so the original location has a slightly reduced scope now that there's two shops.

Having lived around the corner for many years, I can testify to the fact that Dovercourt Village folks are happy the Geary store is still kicking. It makes sense to travel a bit when looking for a new bike, but when it comes to repairs, it's nice to have a place that's close to home. 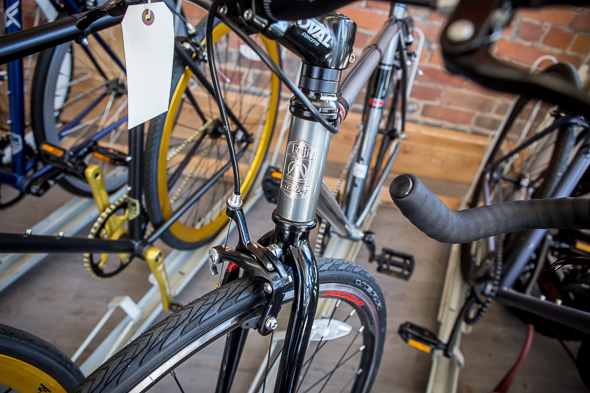 Over the years, Riders has ramped up their offerings of new bikes. That's something one can gets a sense of walking into the Harbord store. While the original shop was always chock full of bikes, there's more new rides here. Brands include Genesis, Breezer and Fuji. The focus is squarely on city riders, so the stock ranges from slick fixies/single-speeds to upright commuter bikes. 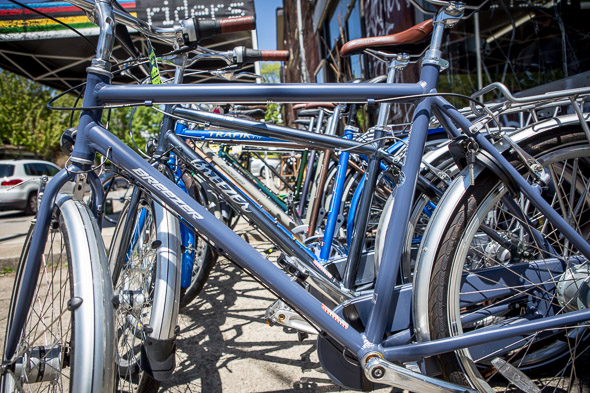 Prices are competitive here. This is an excellent shop to buy one's first new bike. You can get a solid ride here for $600 or less, and you'll get service guarantee from the shop that ensures it'll run well for years. The value of that shouldn't be underestimated, as Riders has staked its reputation on its commitment to service. 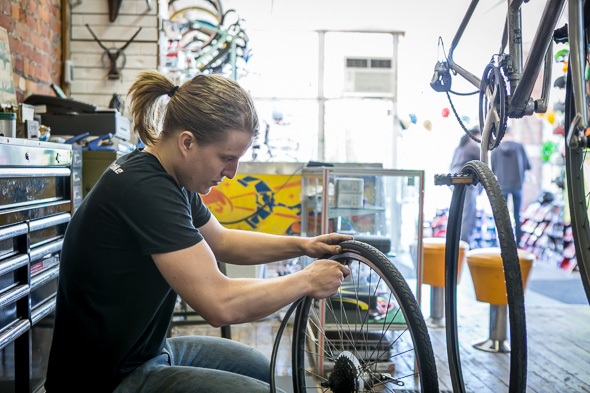 I won't name the shops, but I've had crappy free tune-ups from places that acted like it was a major chore to make good on their own service guarantees. You won't get that here. In my extensive experience with the store, they really go the extra mile. If you're looking for a tune-up on your existing bike, that'll come in at $60, but also includes wheel-truing.

There are more expensive bikes too, but the bang-for-buck factor is consistent along the range of prices. As for used bikes, that's confined to the Geary location now, and less of a focus in general. Tomlinson tells me that it's quite difficult to establish the provenance of used bikes, which is why they're picky about how they acquire used offerings. 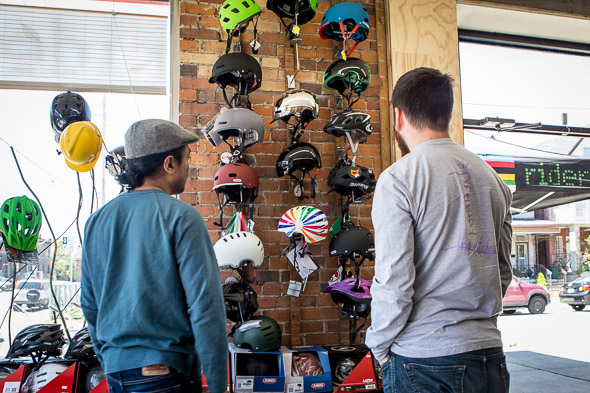 As far as accessories go, you'll find plenty of helmets, locks, bells, fenders, baskets and grips -- basically everything that a commuter cyclist could need. It's all laid out nicer than before, and thus more enticing for customers stopping in for some maintenance to indulge in a purchase or two. 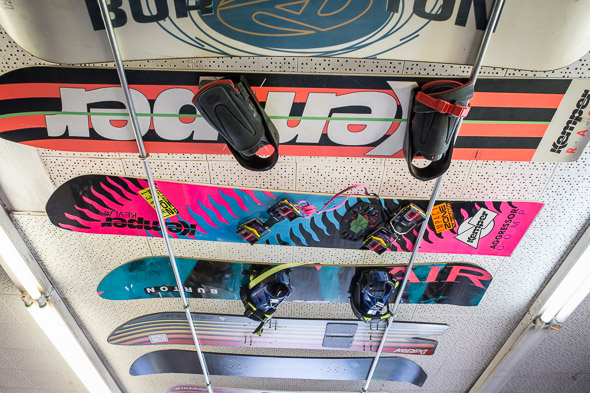 You'll also notice skateboards and longboards in the shop. They don't occupy the same focus as the bikes, but it's a secondary part of the business that has its own community, including snowboarders looking for service in the winter. 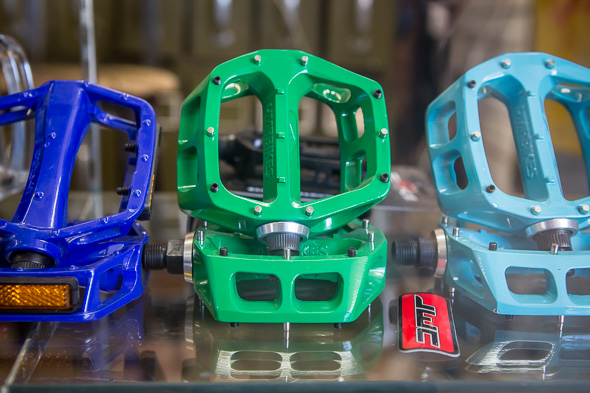 One important bit of info to note is that as much as the store is targeted at commuter cyclists, Ubalde and Tomlinson also do custom builds. In fact, I'd say it's one of the things that they excel in. If you want to build up a dream ride, they'll help walk you through the process. These guys are bike fanatics, and they understand just how exciting such a project can be. 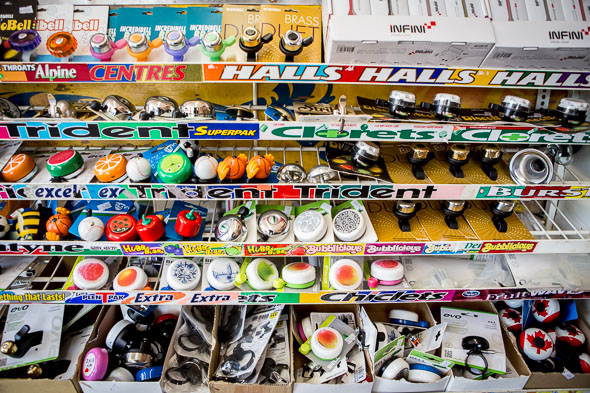 Riders played a major role in the retail resurgence on Geary Ave . I would suspect that the Harbord shop will also function as a community hub. As was the case at the first shop, they'll serve coffee here and also just chat about bikes. If only more shops were so laid back and neighbourhood-driven. 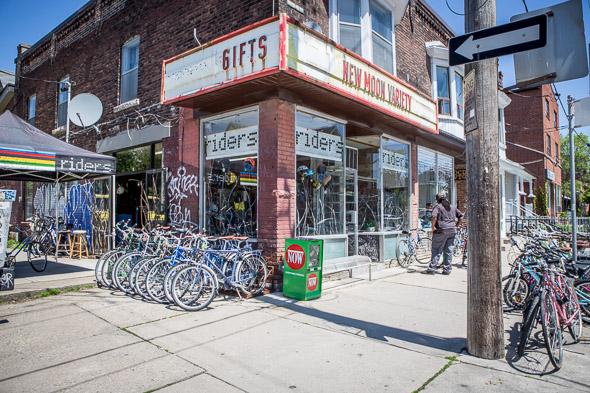