Kops Records new Annex location at Bloor and Markham is already bustling on Saturday afternoon just a couple of hours after their official opening last weekend. I stopped in looking for co-owner Nick Koppel, but was told he ran out at the last minute to grab emergency gear for the bands playing the grand opening party later that day, so I ended up chatting with Nick's father Martin instead. I'd advise pretty much anyone to follow my lead and spend some time with Nick's record loving, music history obsessed dad. 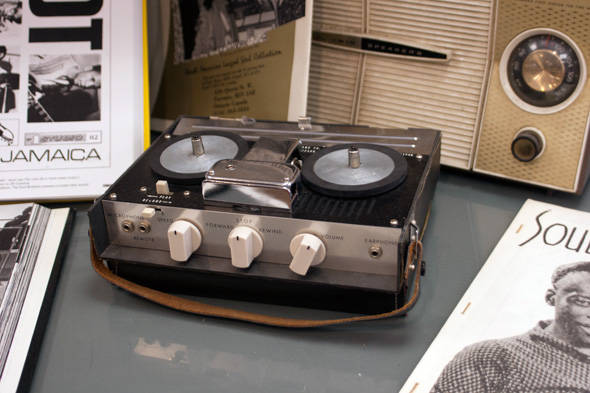 Amid bins of vinyl and what look to be priceless antiques and paraphernalia like a cylinder photograph and an enormous gramophone, Martin, who opened the original Kops in 1976, tells me that he never expected to open another store. Then, as vinyl slowly made a comeback and sales at their Queen Street location rose by about a third each year while stacks of records piled up in their warehouse, a couple of years ago the Koppels started looking for the perfect space to expand. They've clearly found it in the Bloor Street location, notably close to where Sonic Boom was formerly located . 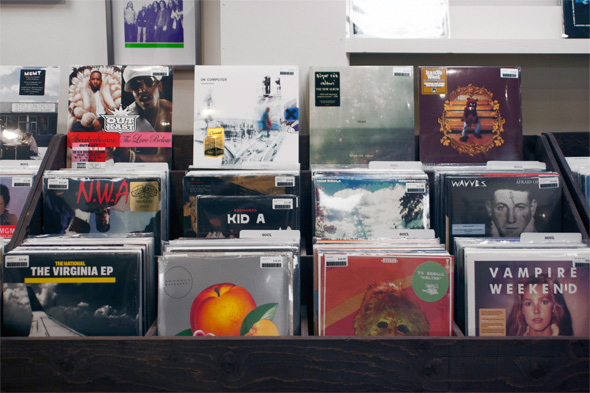 Martin explains that while the Queen Street location is successful, street traffic there is mainly frantic tourists or people living and working in the area, and tends to come to a standstill by 7pm. The Annex, on the other hand, has a better late night scene. "Collectors who know us will follow us here, but people also tend to meander slower on Bloor," Martin tells me. This new location will be open until 9pm daily, except for Sunday when they'll be open "noon till late." 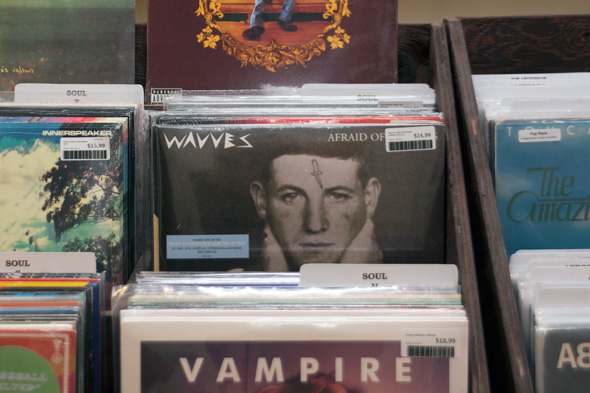 The new, much larger, shop is meticulously organized, with a huge wall of 45s and sections for new vinyl, reissues, and vintage â "nearly new," Martin stresses, "no ring wear, no broken spines, otherwise they go in the discount bin outside. Some kids are starting out with vinyl and just want a cover-worn Led Zeppelin album for cheap," something for which these bins would work well. Records are categorized by pop rock / classic rock, soul, jazz, soundtracks, county, folk, comedy, and an expansive Canadian section. 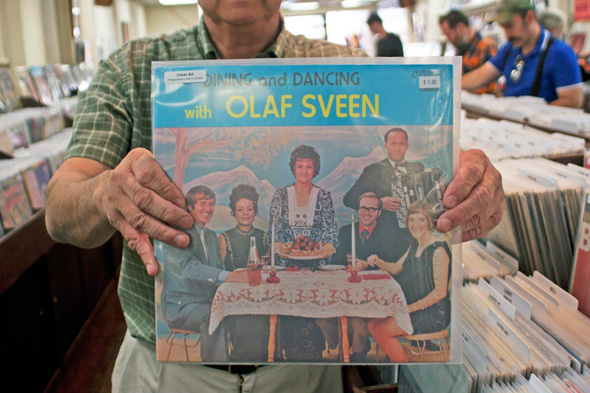 There's even a place specifically for records defined mostly by their intriguing cover art, such as a record titled Dining and Dancing with Olaf Sveen featuring an awkward shot of a Scandinavian gathering where an accordion player looms in the background as well as a copy of the Salvador Dali designed Jackie Gleason record Lonesome Echo . "We're an information source, but not a pushy source" Martin reasons, glowing with excitement. "We want people to be relaxed." The store aims to be the opposite of "the record shop in High Fidelity ," at Kops , the idea is there are no put-downs for someone's taste. 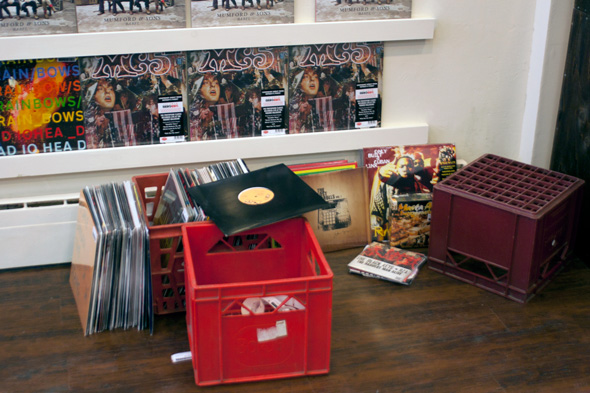 The Bloor storefront will become Kops' centralized location, and there are plans to expand further, possibly into the east end. The Koppels are also hoping to get into schools by the end of this year with an educational presentation they're planning about vinyl culture, care, and the history of music production from Edison onward (Martin asked me, kindly, if I know what a cassette tape is). As I was taken on a whirlwind tour of the gadgets, music players, picture records, Toronto music memorabilia and magazines, the history of recorded music unfolded for me as half refresher course, half new lessons. Getting a glimpse of one of the first record players ever produced felt like a privilege, and yet the item is accessible to anyone who visits the shop. 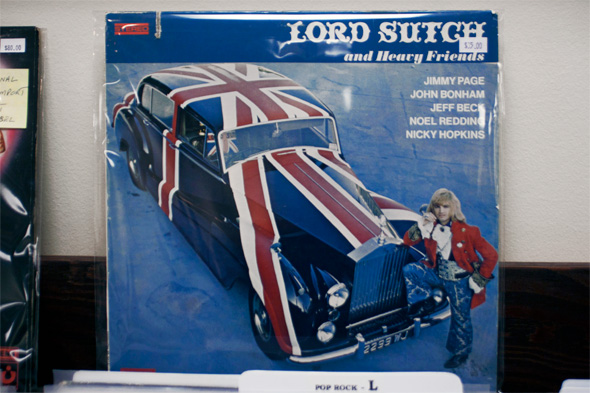 Kops on Bloor doesn't have a local section yet, but they plan to begin accepting records by Toronto artists for sale by commission soon. While the Koppels have a business in England selling collectible vintage vinyl (they are experts 60s and 70s soul / rhythm and blues), they won't sell any of their Canadian stock online that they don't first have a copy of on the floor in their shop. "We're Toronto-centric," Martin emphasizes. He points out a Lord Sutch record featuring a goofy Union Jack motif on the cover and the contributions of Jimmy Page and Jeff Beck, among others, on the disc. "We want these records to be on sale in Toronto. We don't want a picked over store because we're selling everything online." 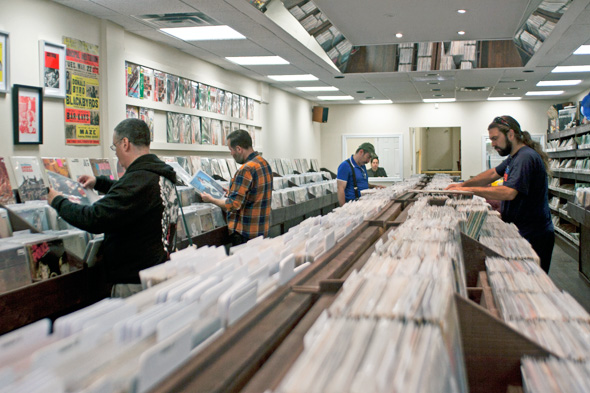 Almost all records at Kops can be previewed in store, since sealed new and reissued records are available for digital listening. While the shop gets most of its stock through other means, they will buy vintage items from walk-ins, a.k.a. people like you and me. 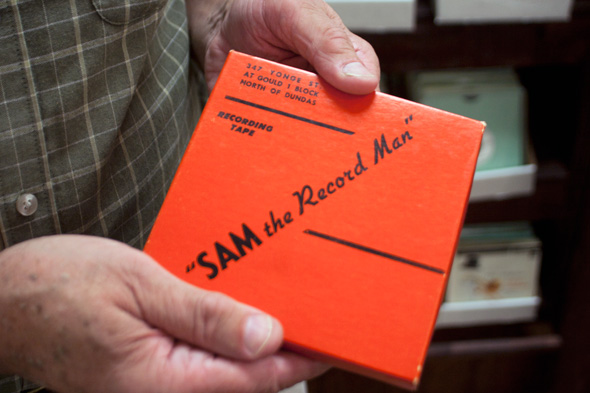 As I left, about 20 people of all ages were thumbing through the racks, and Martin had moved on to talk records with other willing participants. It's thrilling to see a record shop pulse with so much life, and I have a hard time imagining anything but success for the shop and archive the Koppels have built.

Writing and photos by Aubrey Jax