Yueh Tung is one of the few Chinese restaurants left in Toronto’s original Chinatown, which is just east of the current one and transforming into a Little Japan or Little Tokyo.

It first opened in 1976 across the street, moving locations twice since then (but always staying in the area), and can now be found on the second floor of a building, almost hidden away on Elizabeth St. just south of Dundas. 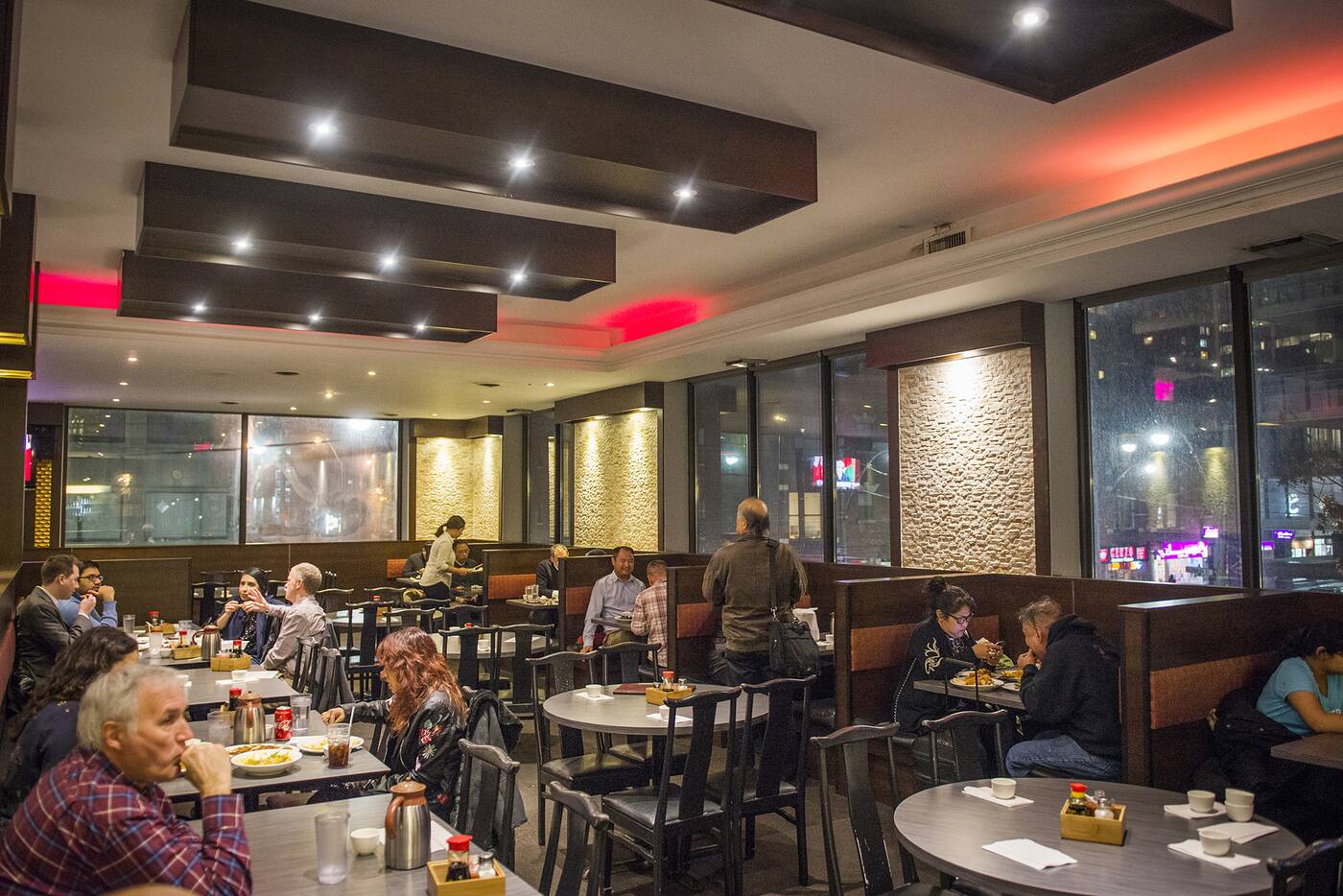 It’s currently run by sisters Jeanette and Joanna Liu, who pretty much grew up in this restaurant – named after a famous Hakka fishing village in southern China – that belongs to their parents.

They’ve updated the place, renovating it and giving it a more modern aesthetic, along with a social media presence. 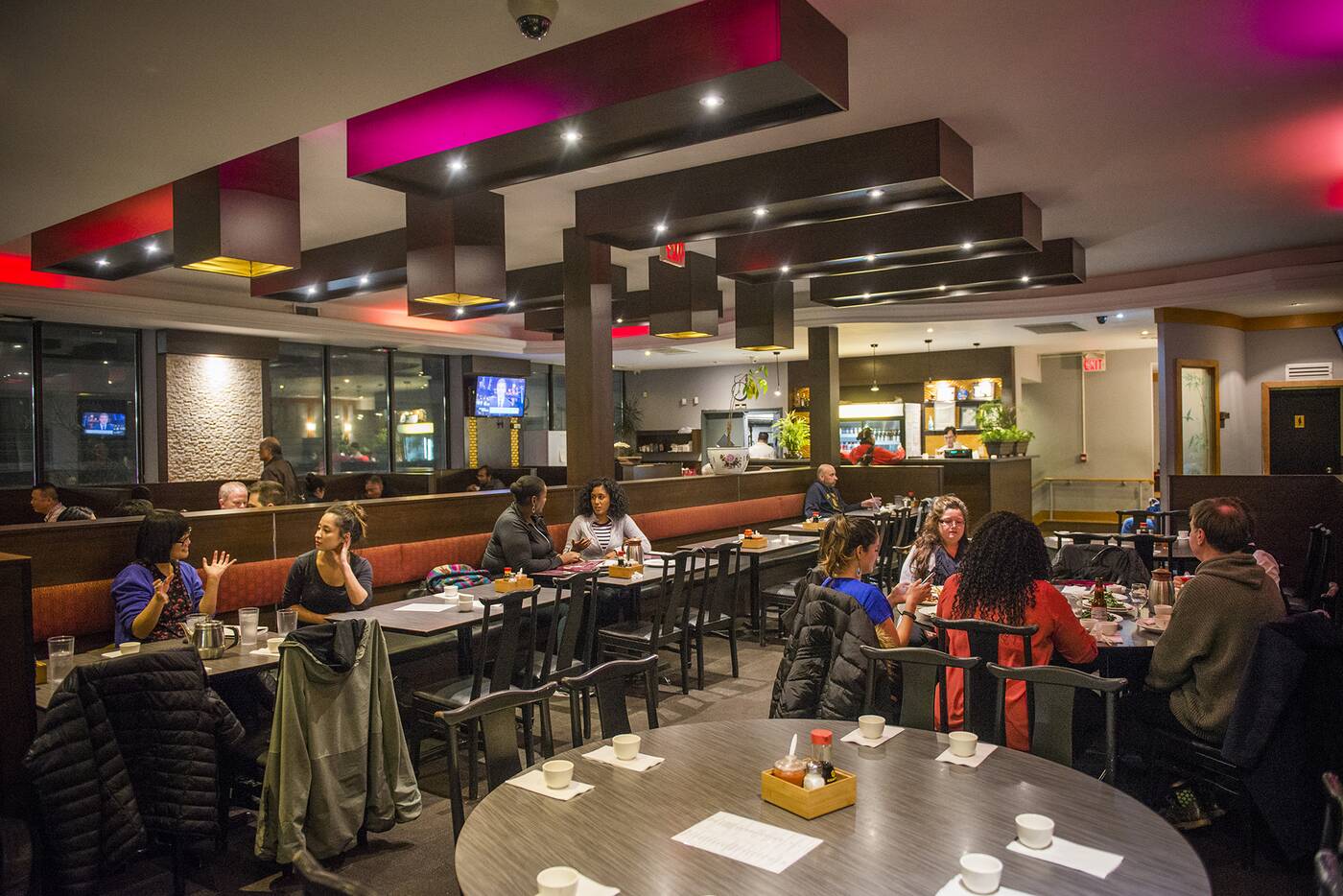 The Liu family is originally from the Guangdong province of China by way of Calcutta (now Kolkata), India, and the food served here covers a range of Hakka cuisine.

They tell me that they offer three styles of Hakka food here: traditional, “real homeland” Hakka, Cantonese Hakka and Indian-style Hakka, which came about due to the migration of Hakka Chinese to Calcutta. 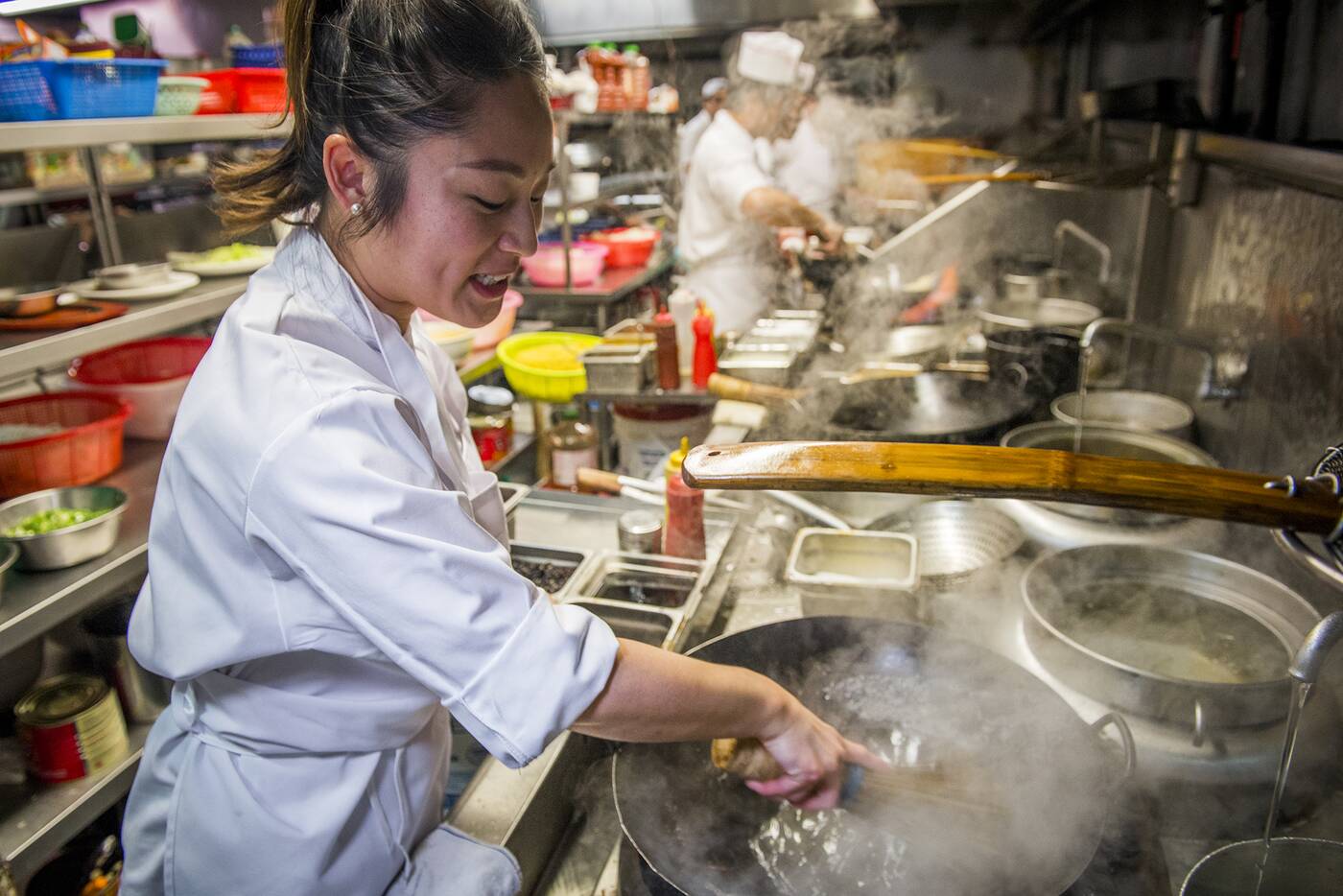 According to the Lius, the pioneers of Toronto’s Indian-style Hakka food all hail from the same area of Kolkata, and their father, Michael, was one of the first – if not the first – to bring it here through this restaurant. 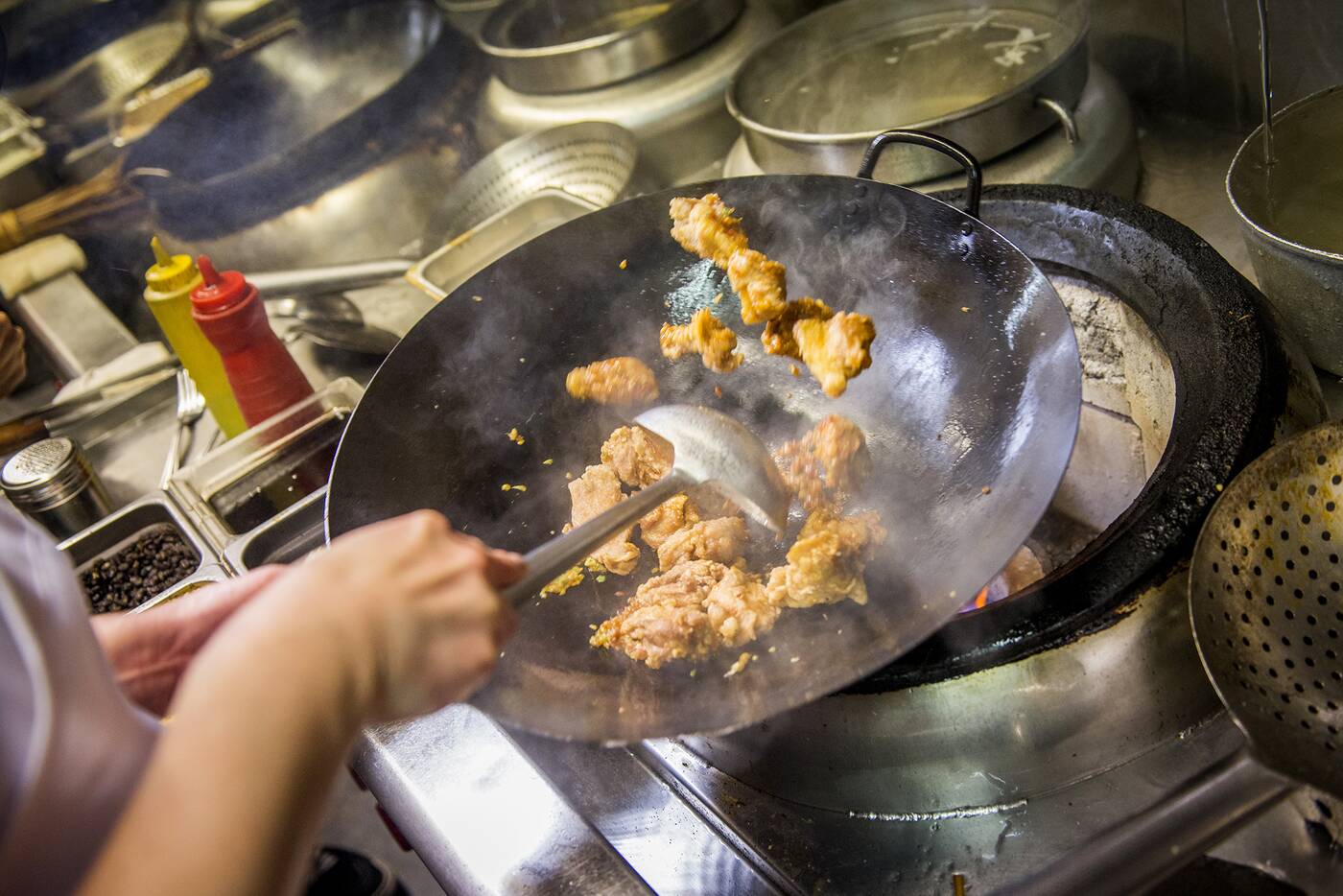 His recipe for chili chicken is a closely guarded family secret, and Joanna, who has now taken over the kitchen from her father (Jeanette oversees front of house, which her mother, Mei, used to do), has learned how to make all his dishes, including this very popular lunch order item. 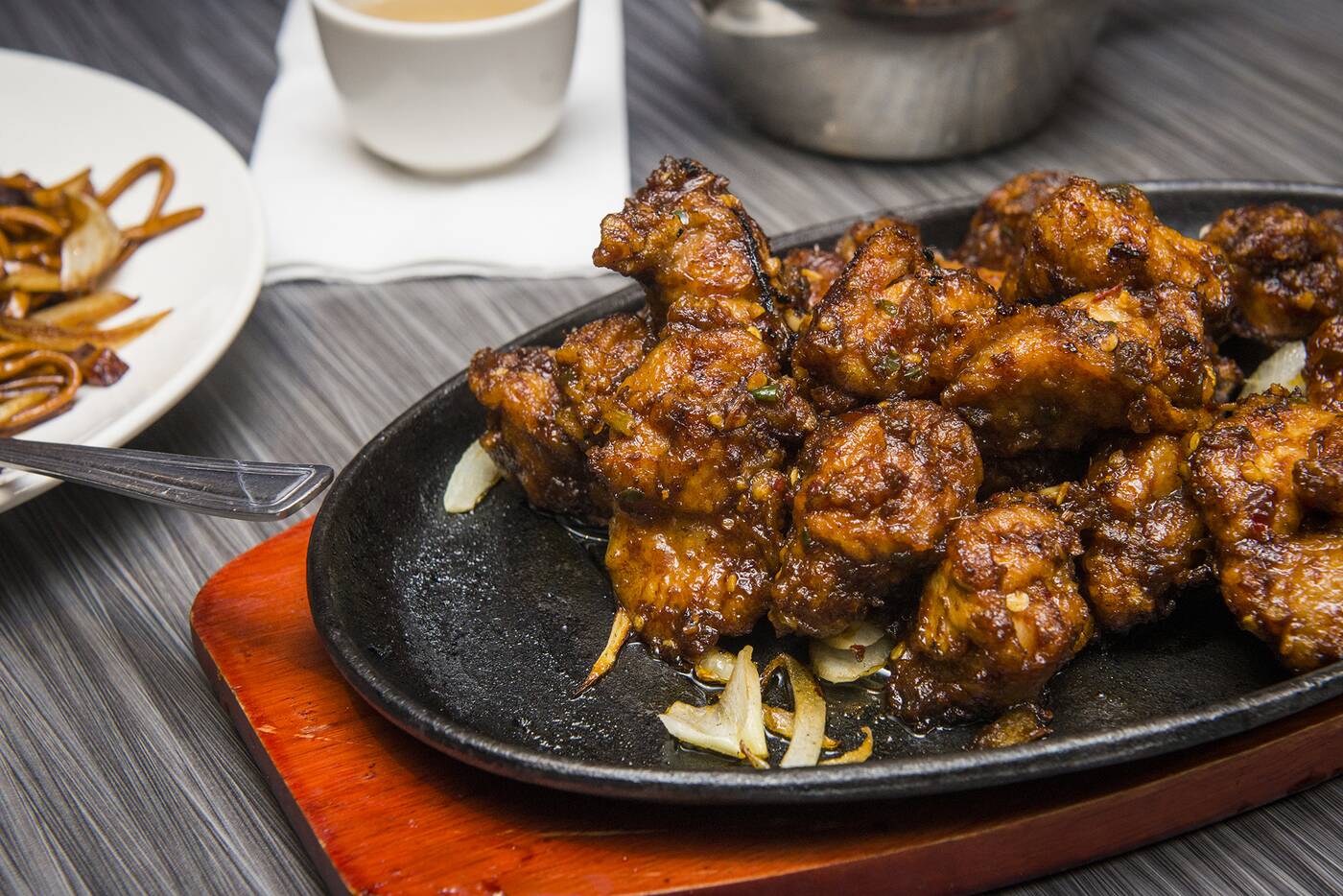 We try the chili chicken wings ($14), which can come dry (pictured) or with sauce. These spicy fried wings come in a house-spice mix along with Thai chilies, sweet Spanish onion and the family’s own version of soy sauce. This is exactly the kind of food that goes well with a Tsing Tao beer. 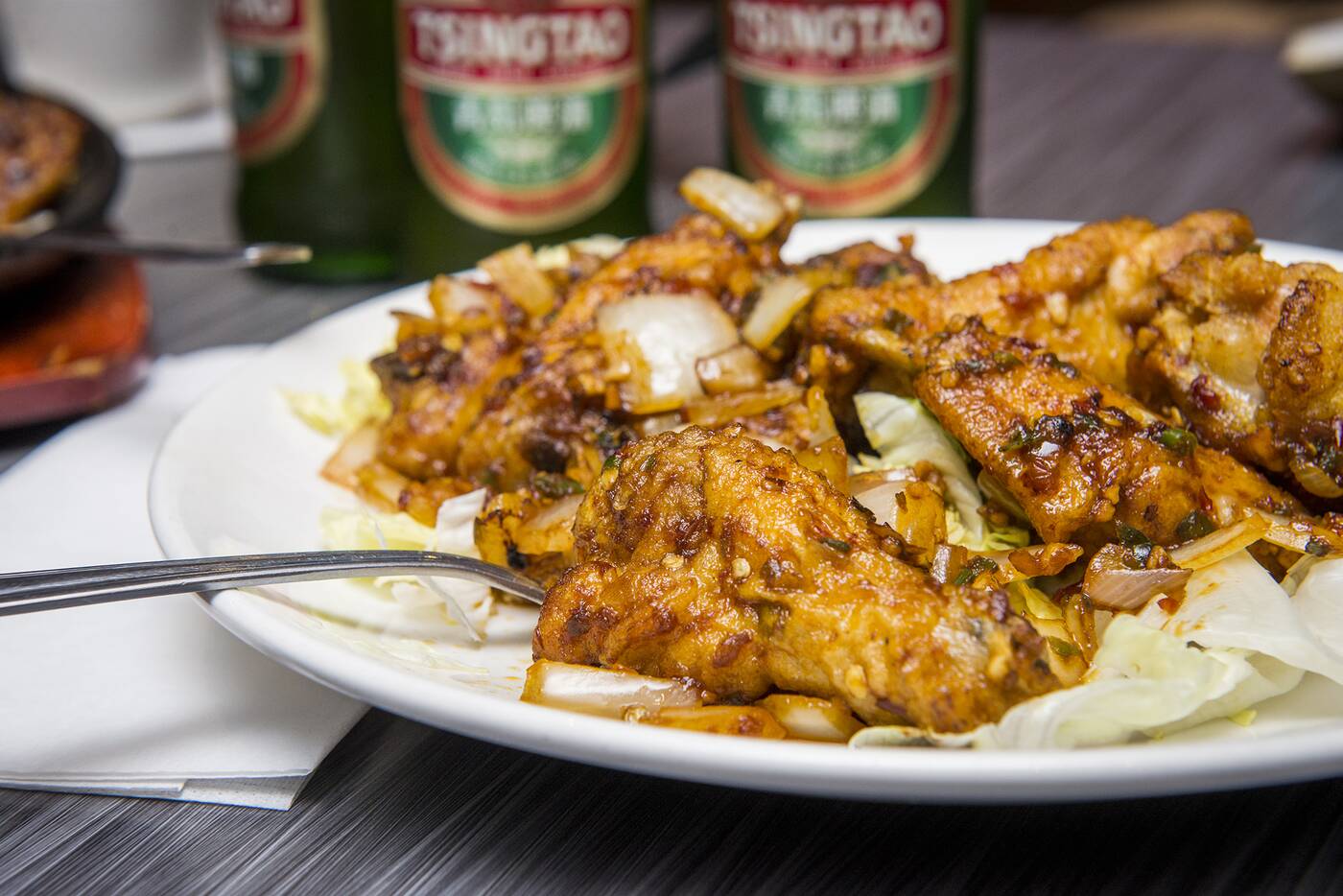 Another Michael Liu original is the Manchurian chicken ($14), also served dry or saucy. We get it without sauce, and it’s crispy, sweet and tangy. Like the chili chicken, it’s fried and contains house spices, albeit a slightly different mix, along with herbs like cilantro. 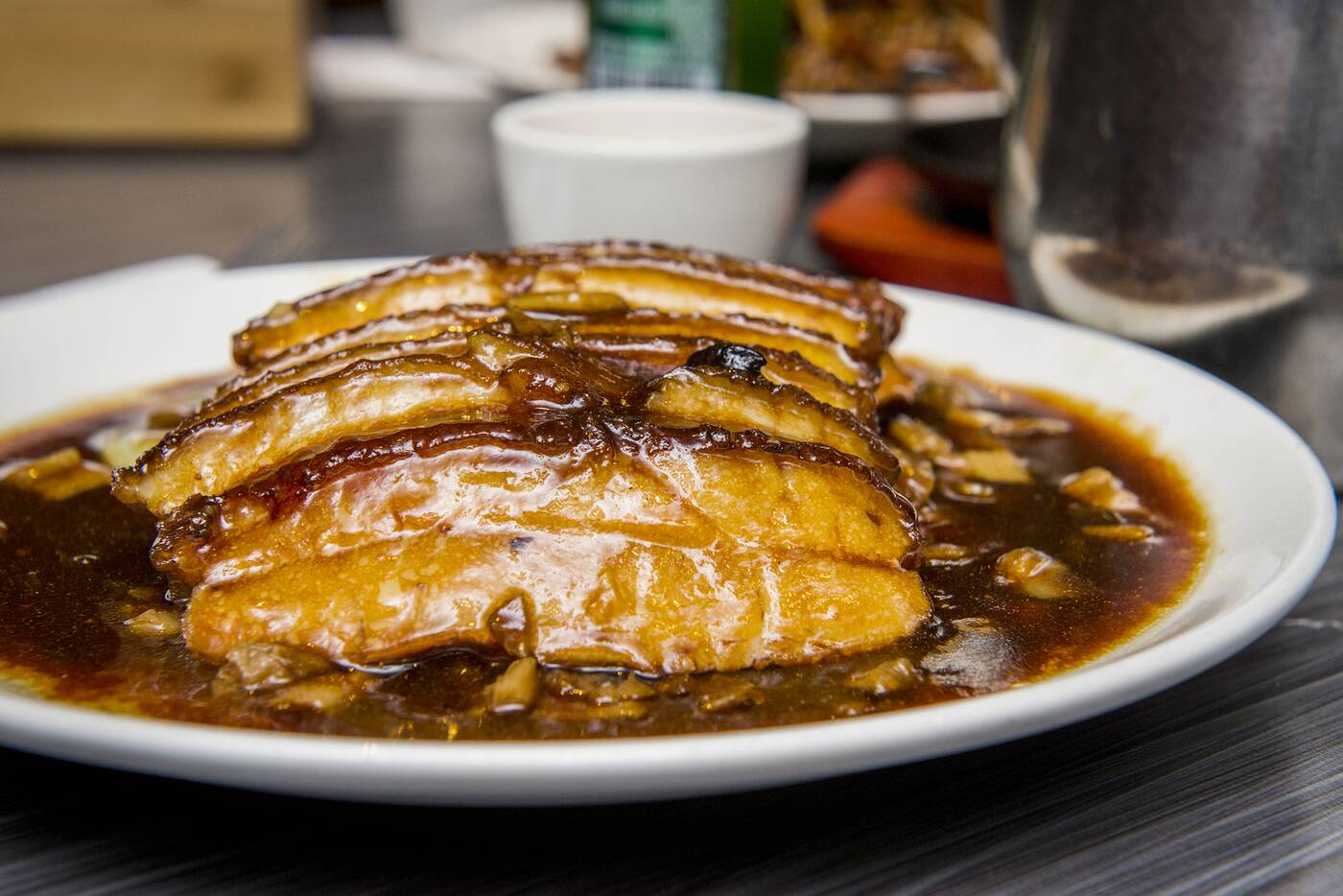 One of my fave dishes of the night is Keu Nguk ($16), slices of melt-in-mouth, 12-hour braised pork belly with muy choy (pickled, preserved mustard greens) in a sweet soy sauce. This is quintessential classic Hakka: sweet, salty, fragrant, fatty and saucy. 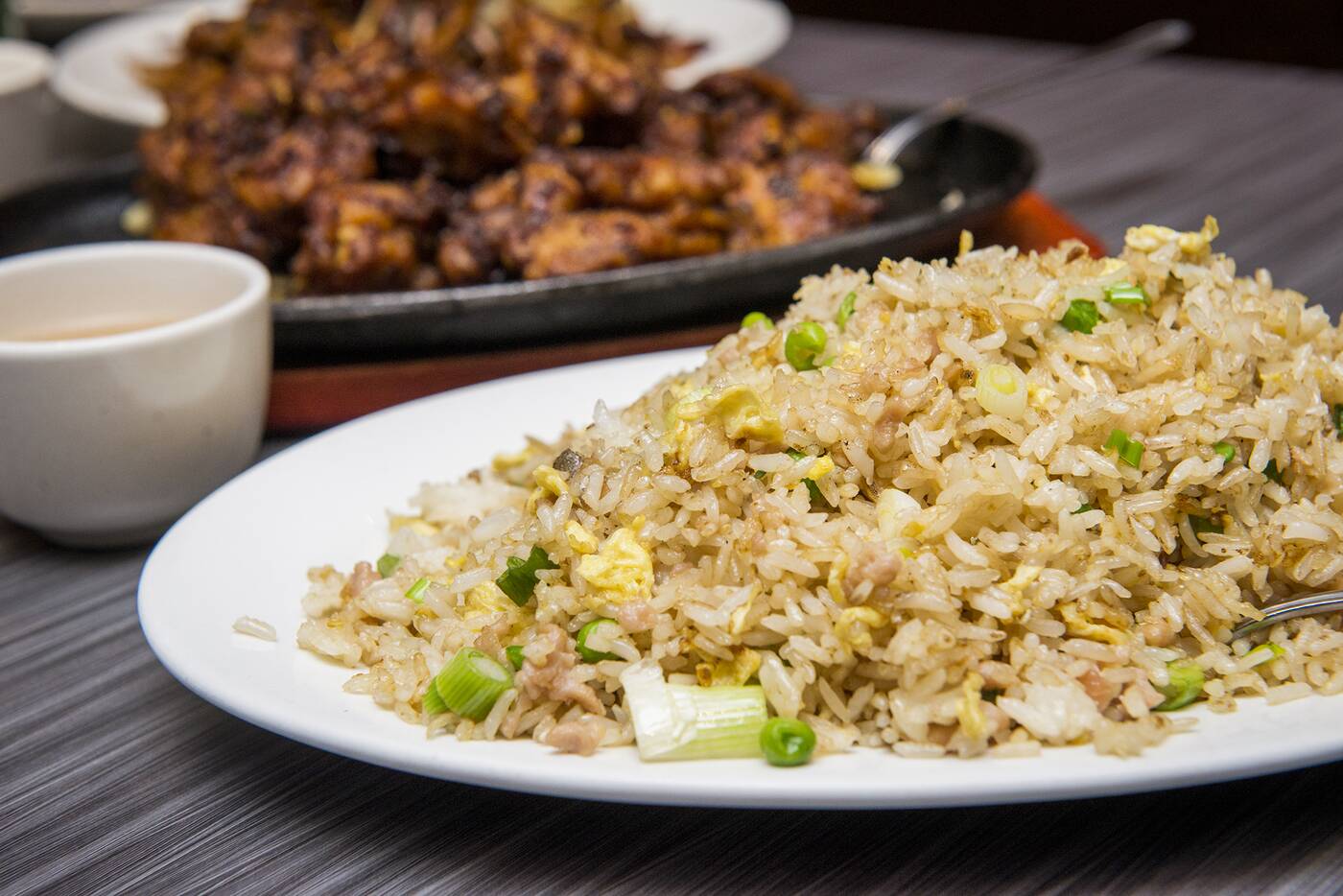 For starch, we get the salted fish with chicken fried rice ($13), a popular Cantonese dish. Cured pieces of mackerel add a funky flavour dimension that can be jarring to some, but it’s comfort food to many. 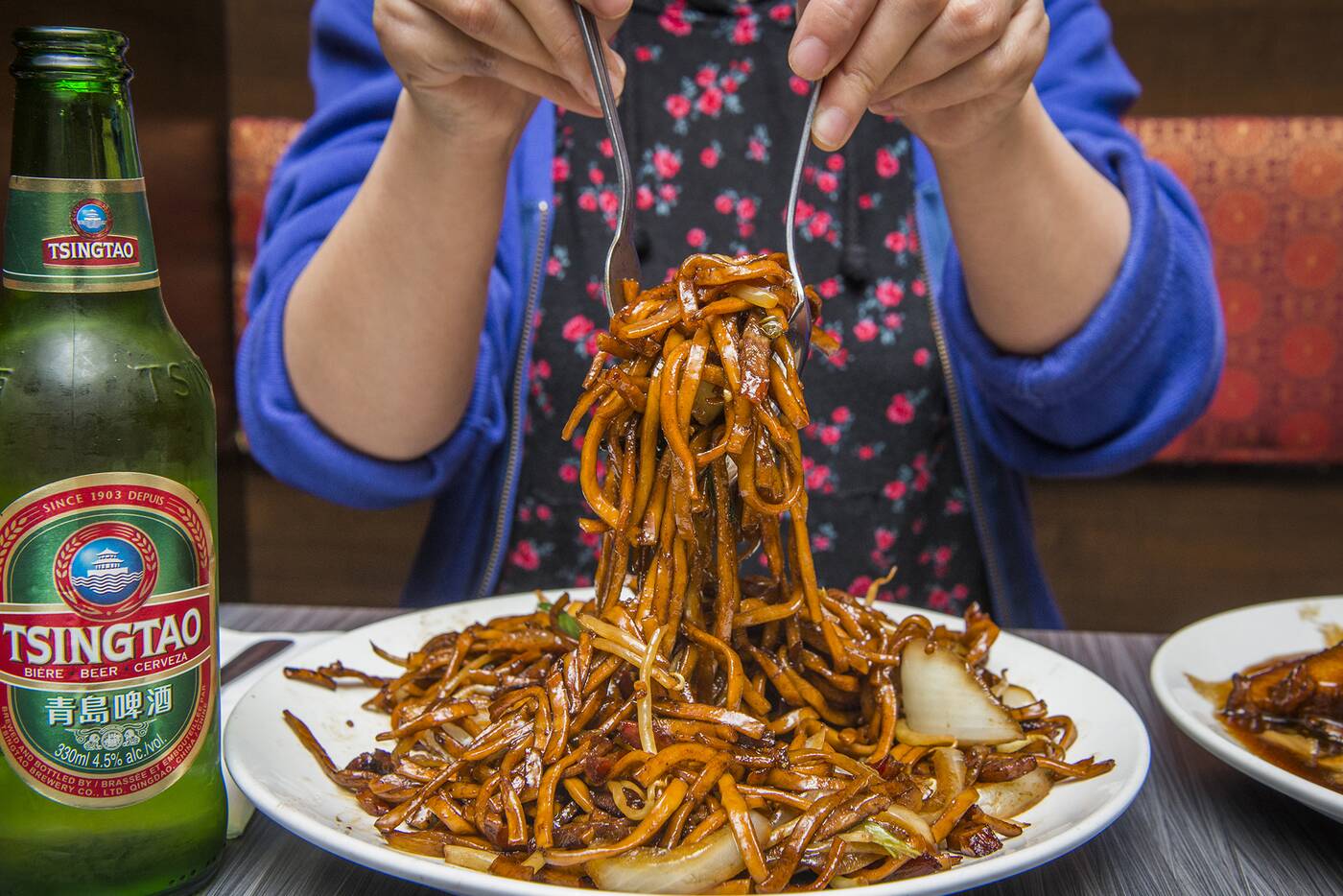 The Lius have seen multiple generations of families come through their Yueh Tung (even my friend’s parents dated here), and Jeanette and Joanna know why these regulars keep returning.

Their parents ran a successful restaurant, so despite the sisters’ small tweaks, overall, their motto is “Don’t fix what’s not broken.” 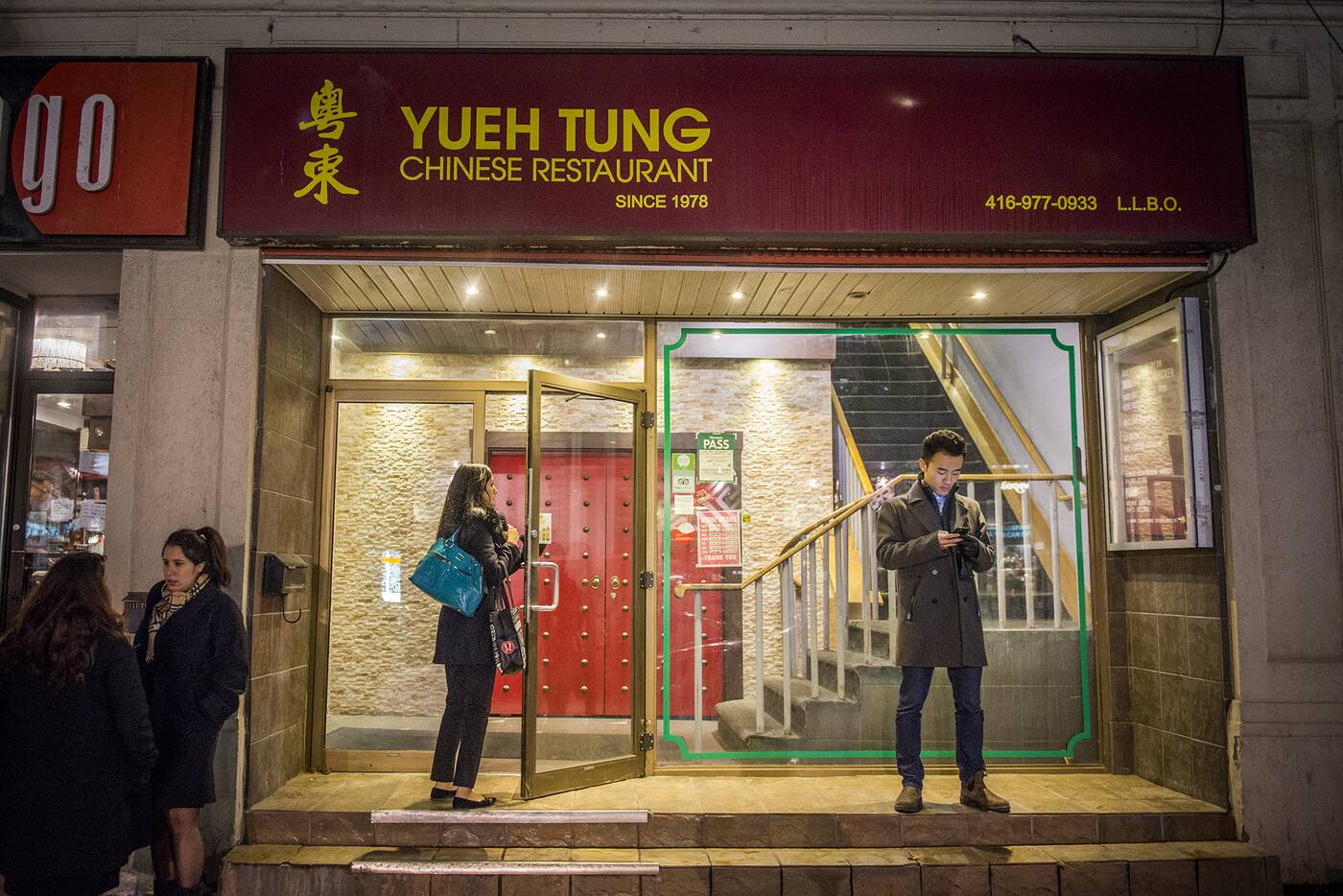 The Best Hakka Restaurants in Toronto