Wvrst Union Station is the second location of the popular beer hall on King West known for sausages and craft brews.

Aside from the fact it's located in the centre of the biggest commuter hub in the city, the space doesn't differ much from its original concept.

Still sporting its signature red-tiled walls and communal benches, it's actually bigger, offering a mix of booth and bar seating that allows for 175 people as opposed to just 140. 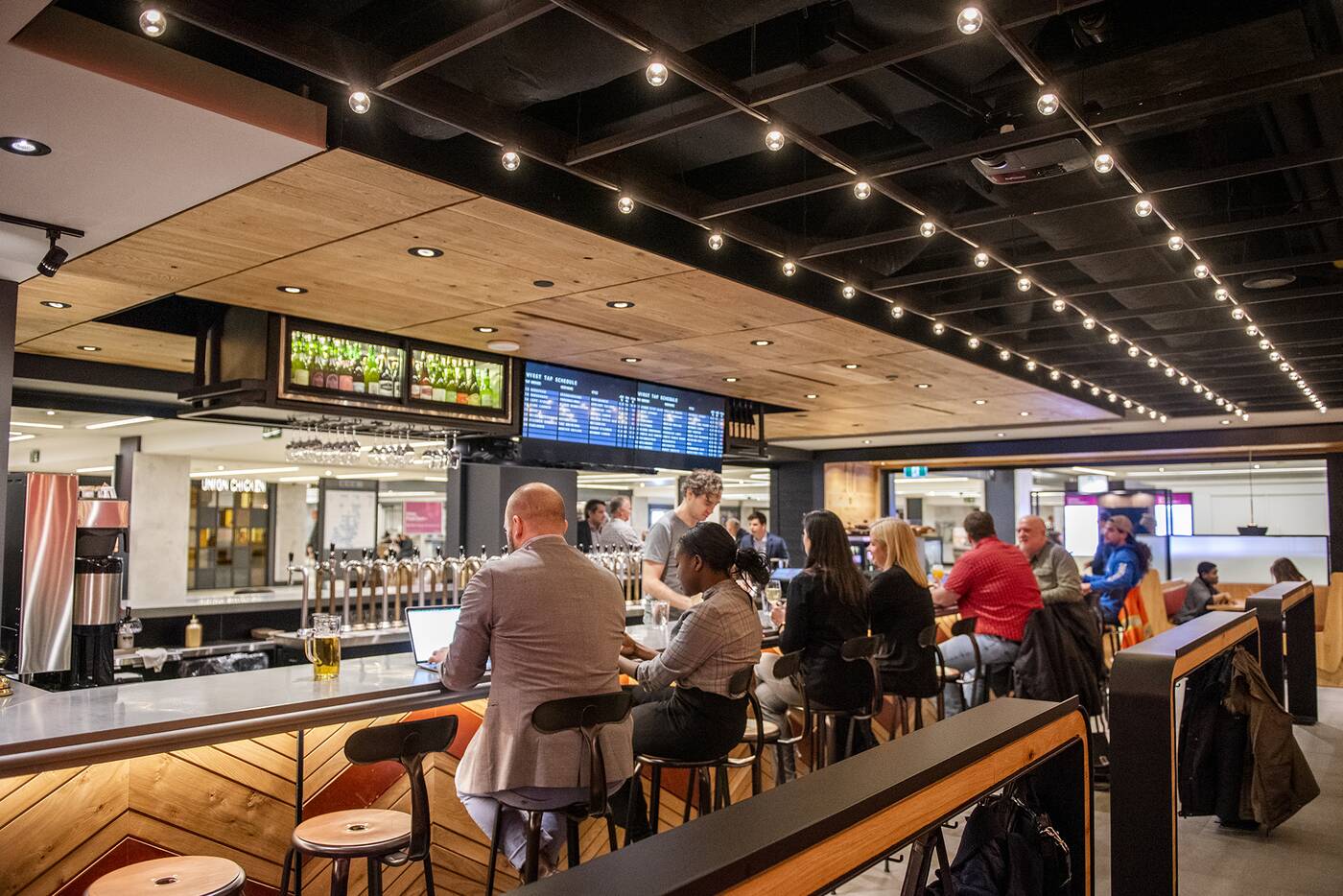 The best way to access the restaurant from street level is from Union Station's entrance off York Street: you'll find it occupying a corner right by the escalators that lead down to the food court. 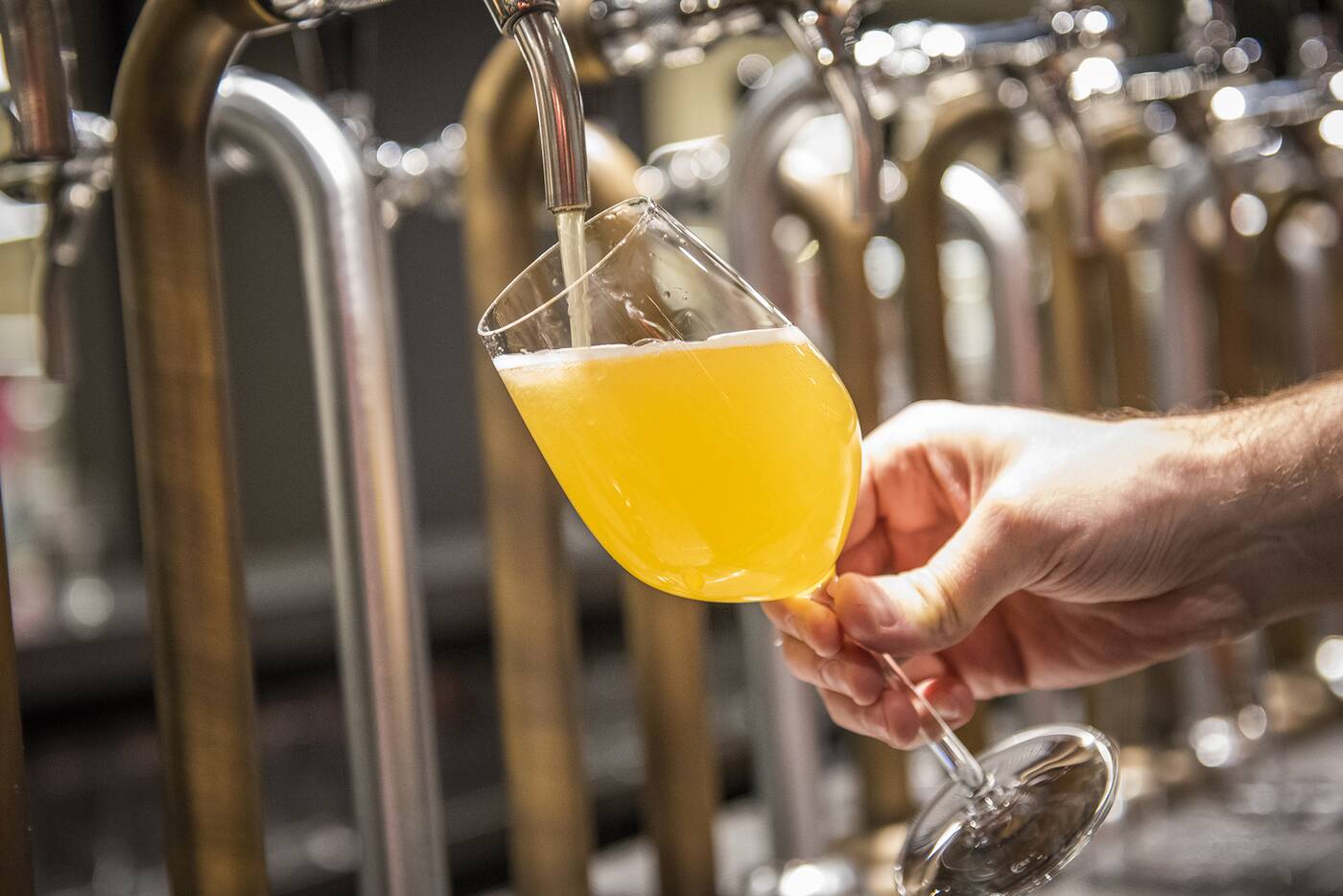 There's a more accessible feel here than the its King West counterpart: TVs at the bar invite passers-by to watch live games, and as usual the beers on tap are plentiful and always on rotation. 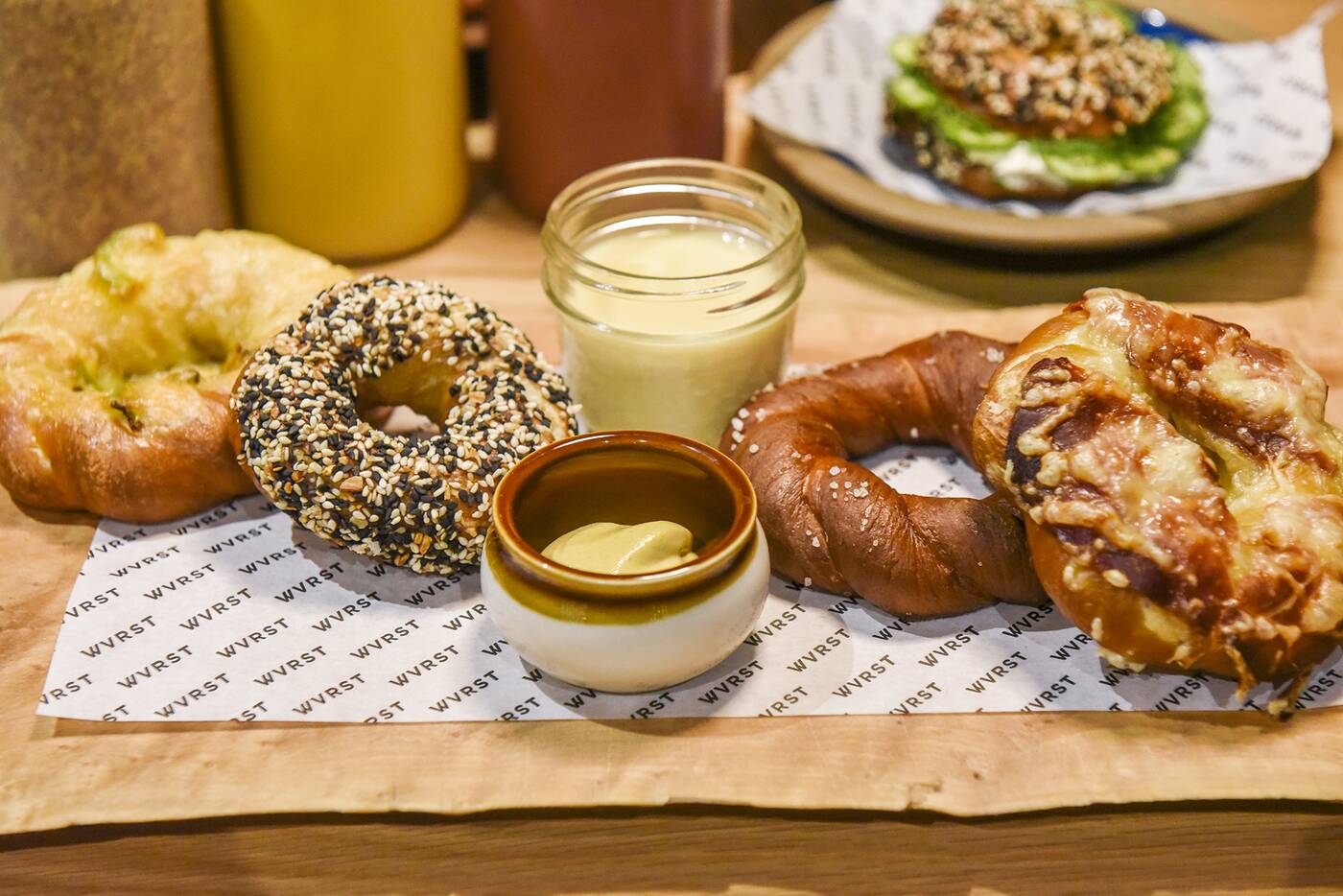 The thing that sets this Wvrst apart is its introduction of pretzels. A handful of fresh pretzels baked in-house officially makes theirs the most Eastern European menu ever.

Baked loops like the jalapeño and cheddar pretzel ($5) or the one with speck and raclette cheese ($5.50) are served with dijon mustard. 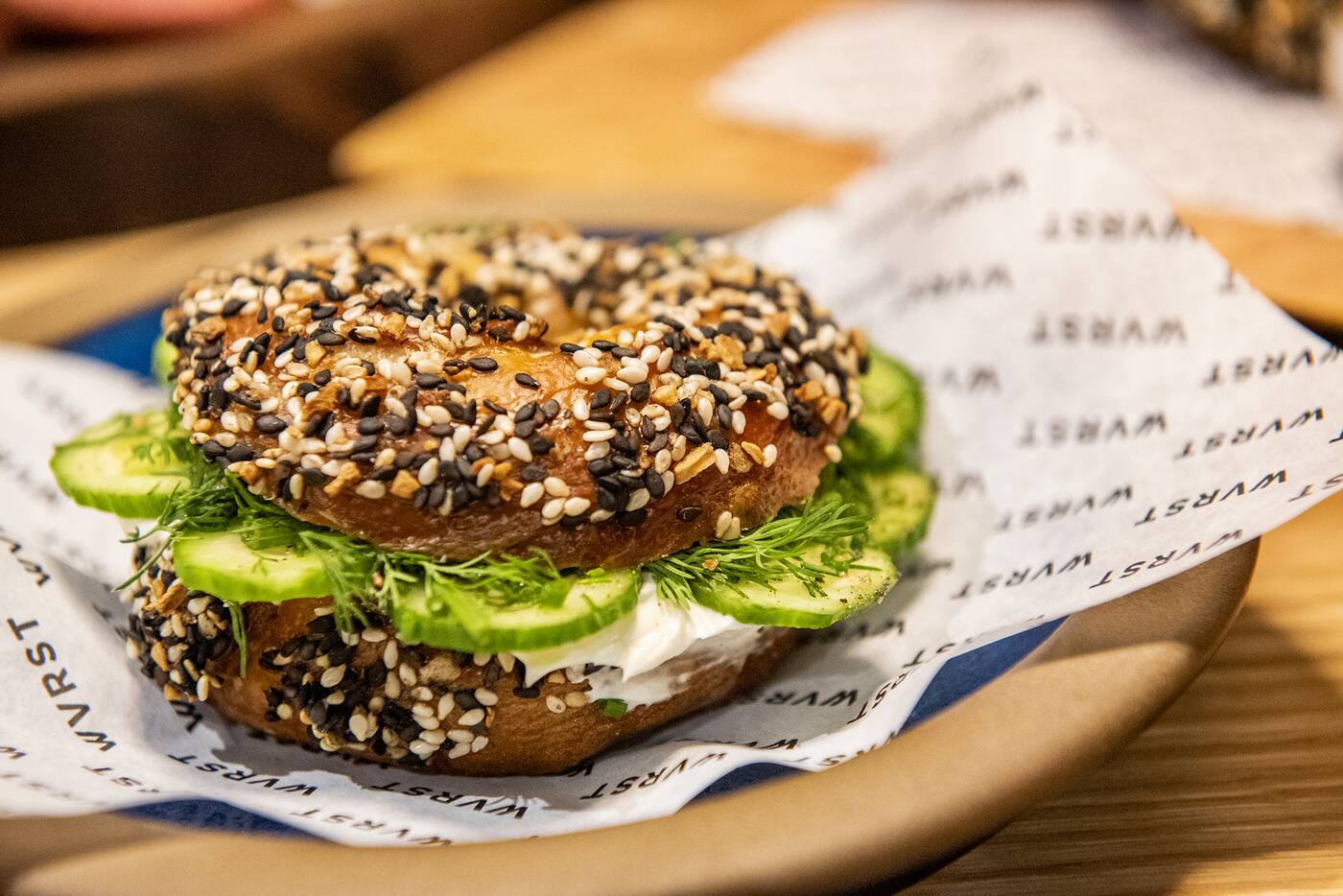 With the everything pretzel ($4.50)—which comes with onion, garlic and seasame—you have the option of adding whipped cream cheese, dill, and cucumber for $2 to make for a refreshingly light sandwich that's lunch-friendly. 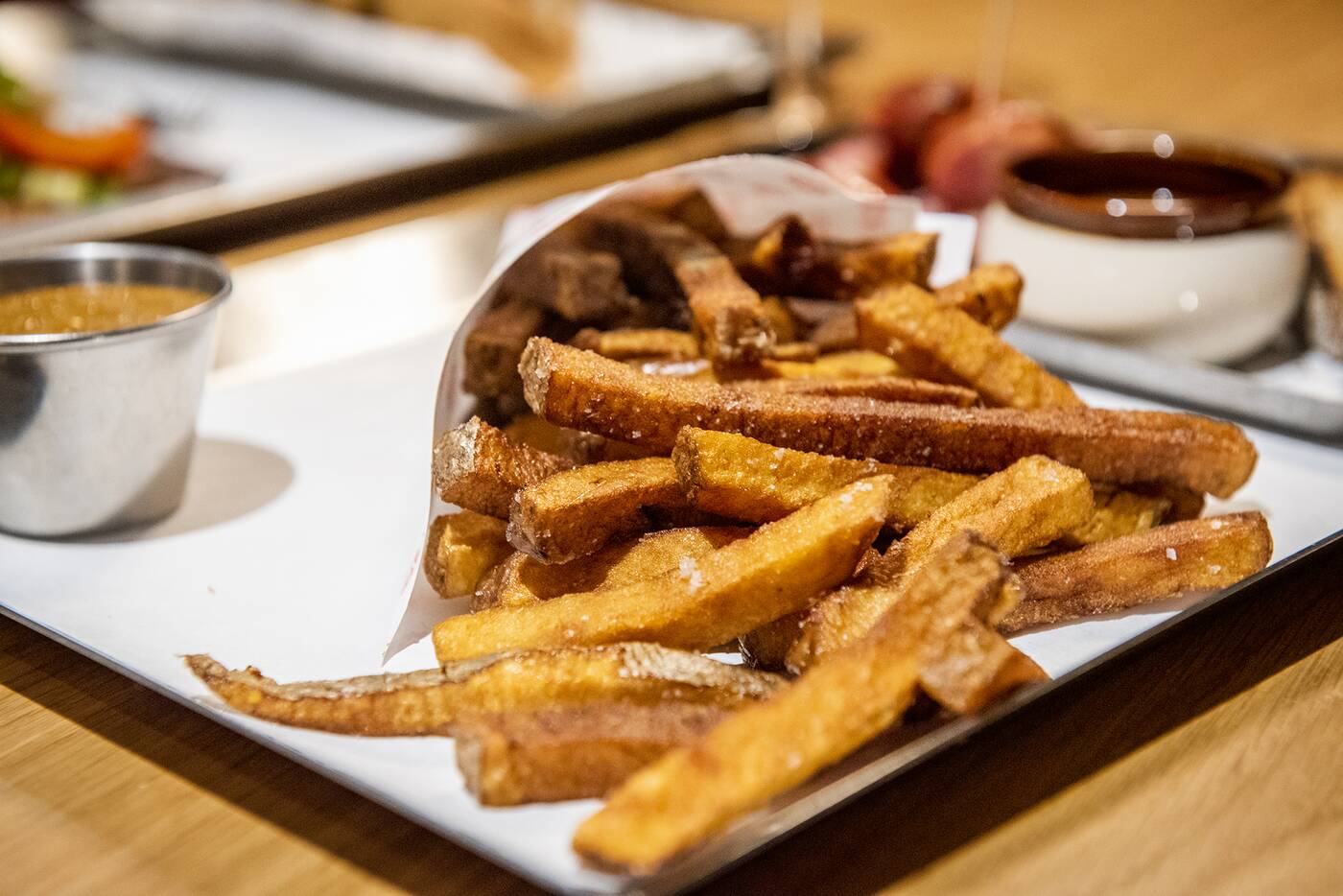 There's also the option of adding cheese sauce ($3.50) made from smoked gouda and raclette. It's milder than the highly processed Pretzelmaker cheddar cheese dip (which is probably a good thing) and goes well with everything like regular fries ($4.75). 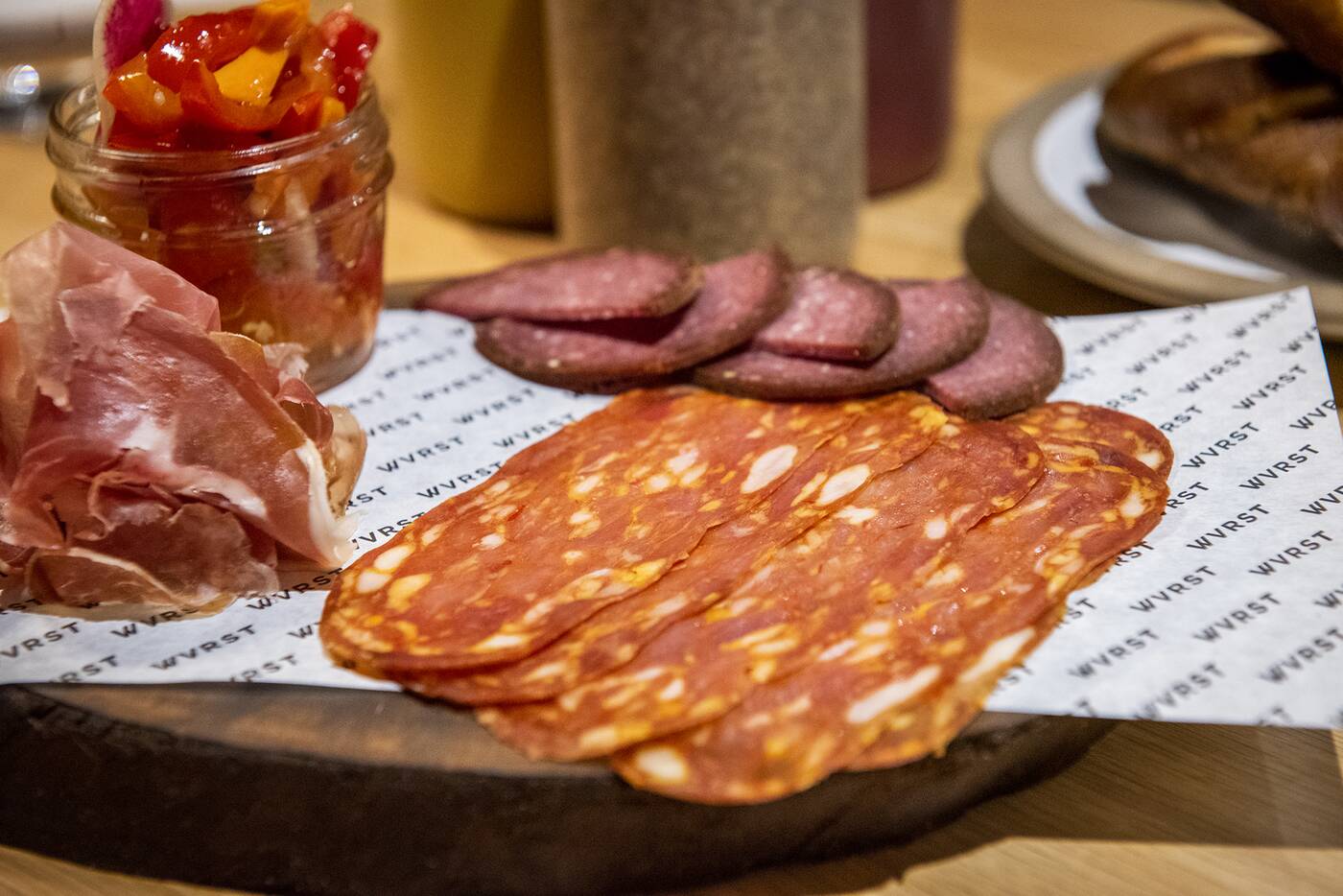 Charcuterie boards are $8 for a one-person portion and $16 for groups of two or more. It comes with slices of spicy sopressatta, prosciutto, and summer sausage from St. Lawrence Market. It also comes with a killer side of giardiniera (pickled veggies). 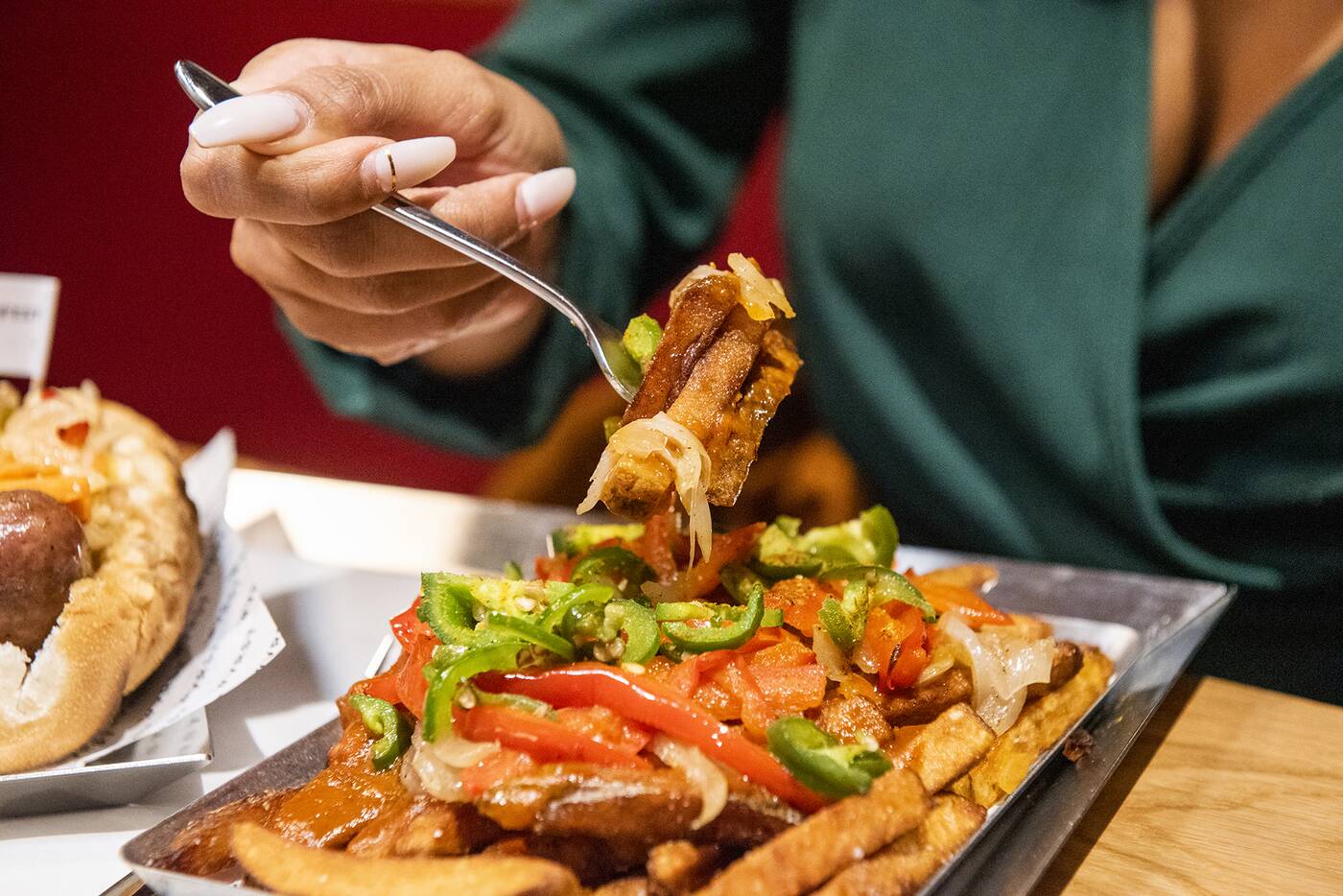 From the original menu are the dirty duck fat fries ($10.50 for a large), which are Belgin fries topped with veggies and their signature curryWVRST sauce. 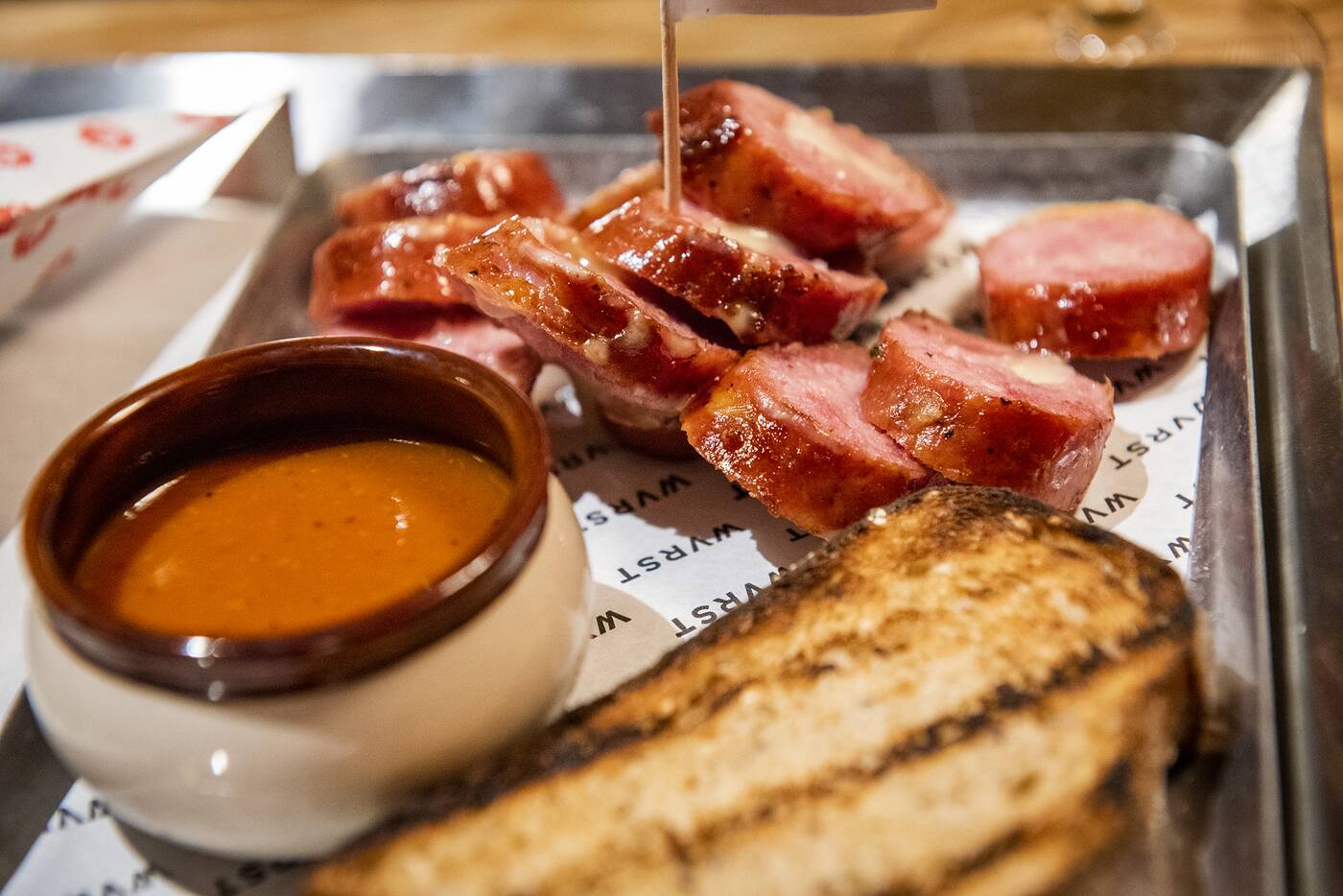 If you order any sausage (like the cheesy Kaas) between 11 a.m. and 2 p.m. at this Union Station location, it'll be ready within minutes. 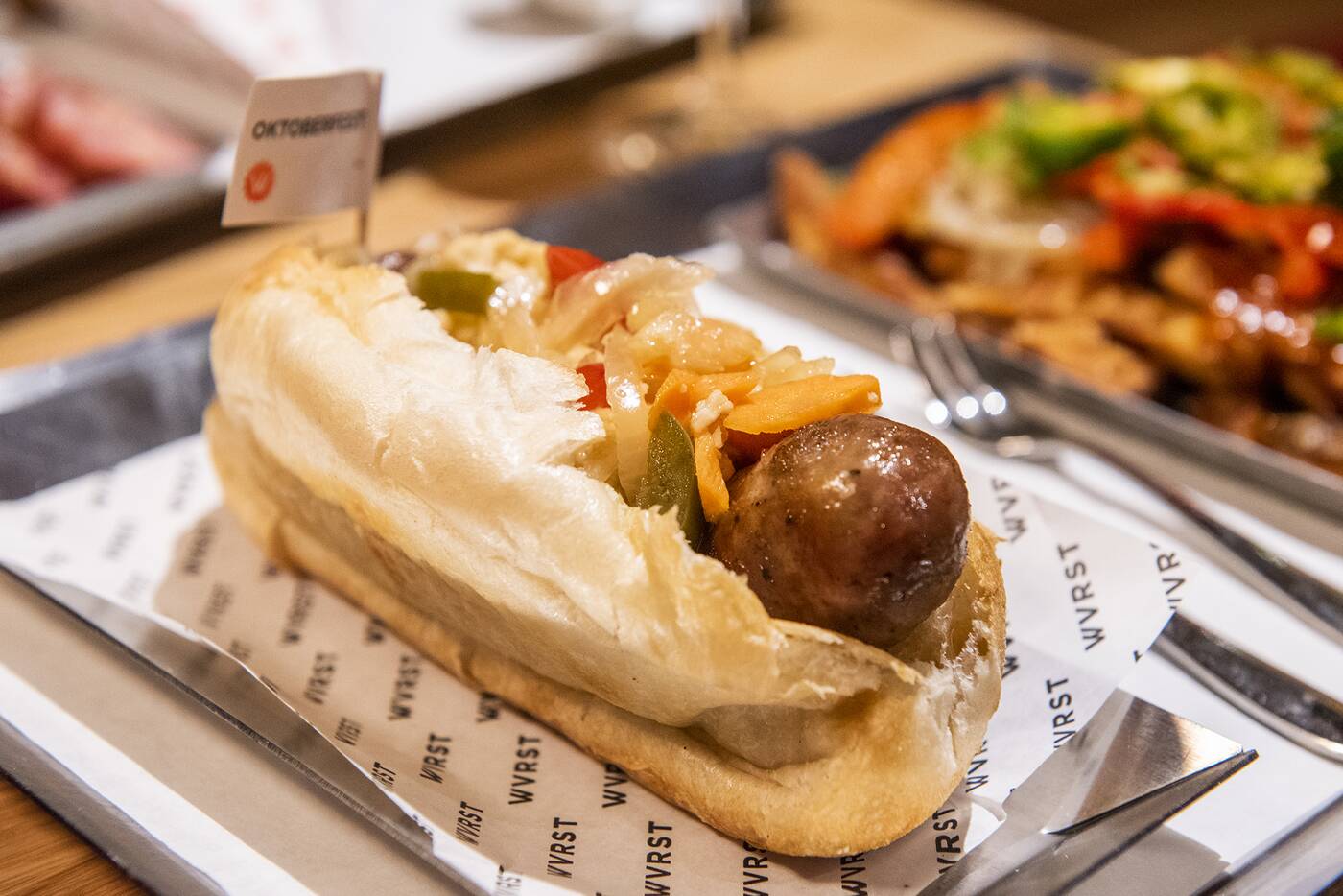 Same goes for the classic Oktoberfest sausage blend of pork, beef, and sage. 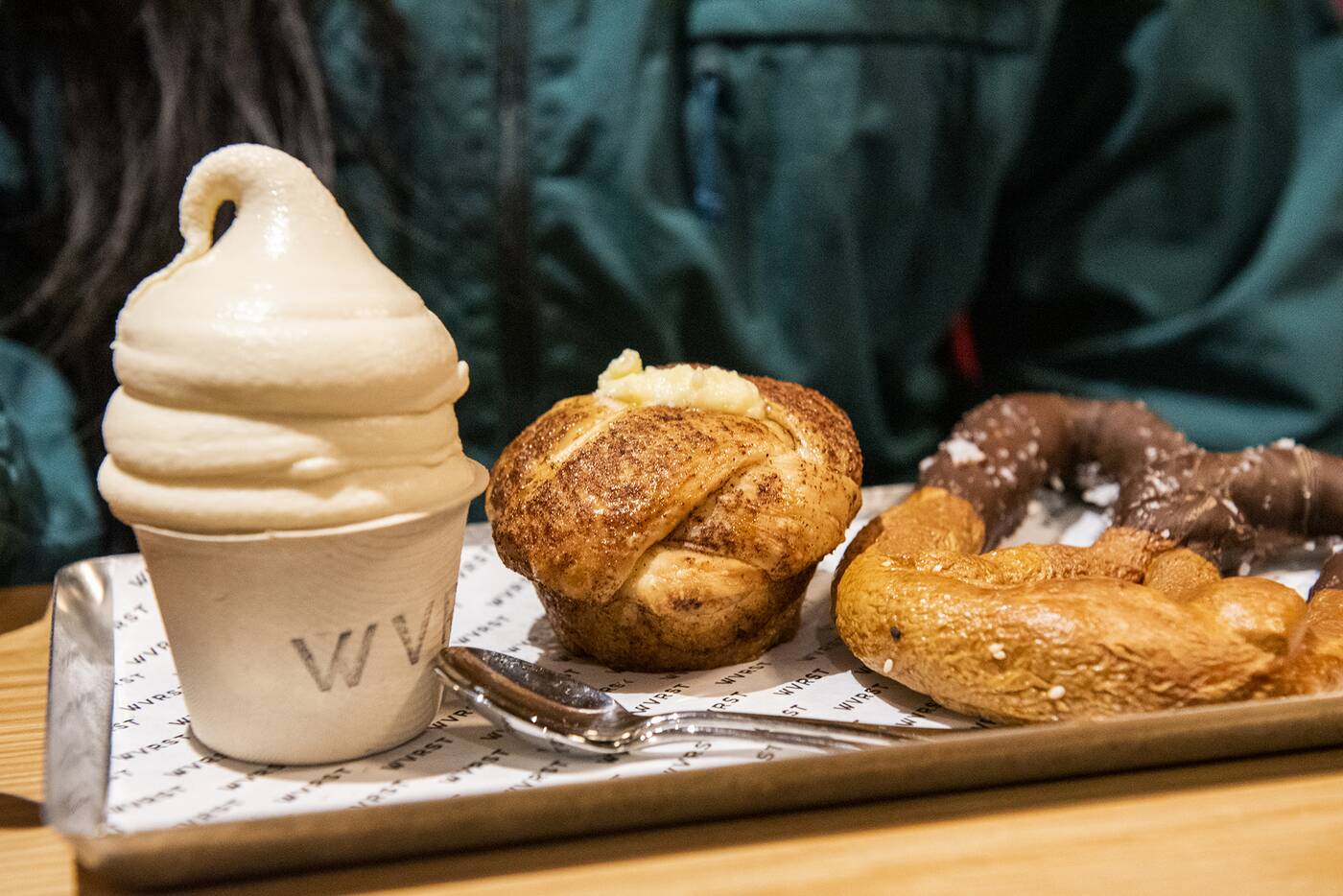 There's four dessert options here, and though there aren't as many ice cream flavours available, the selection here is like the A-team of the bunch. 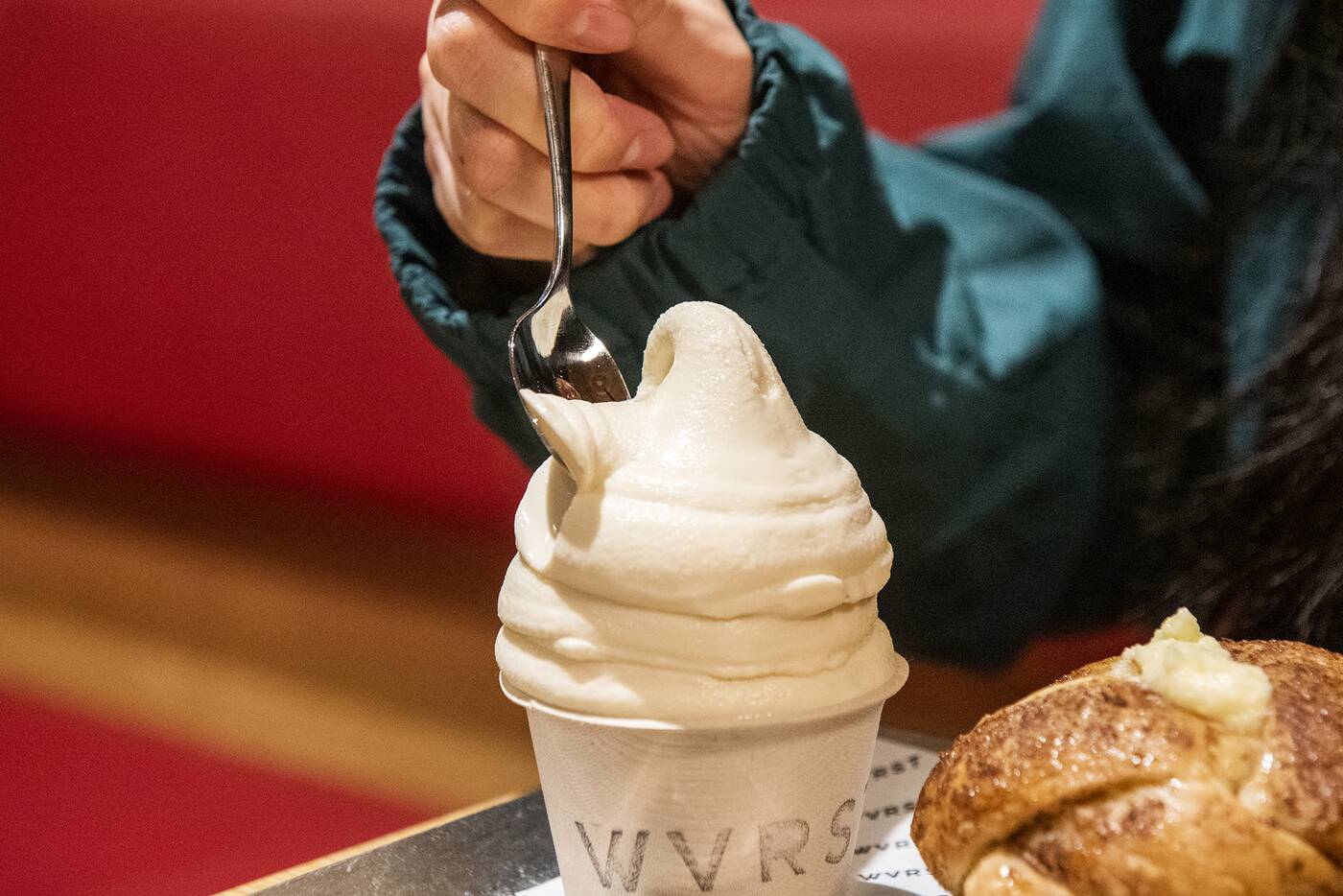 The salted rosemary ice cream ($6.50) is by far the most popular and unique cold sweet from the brand, and pairs well with a salted chocolate pretzel ($5.50). 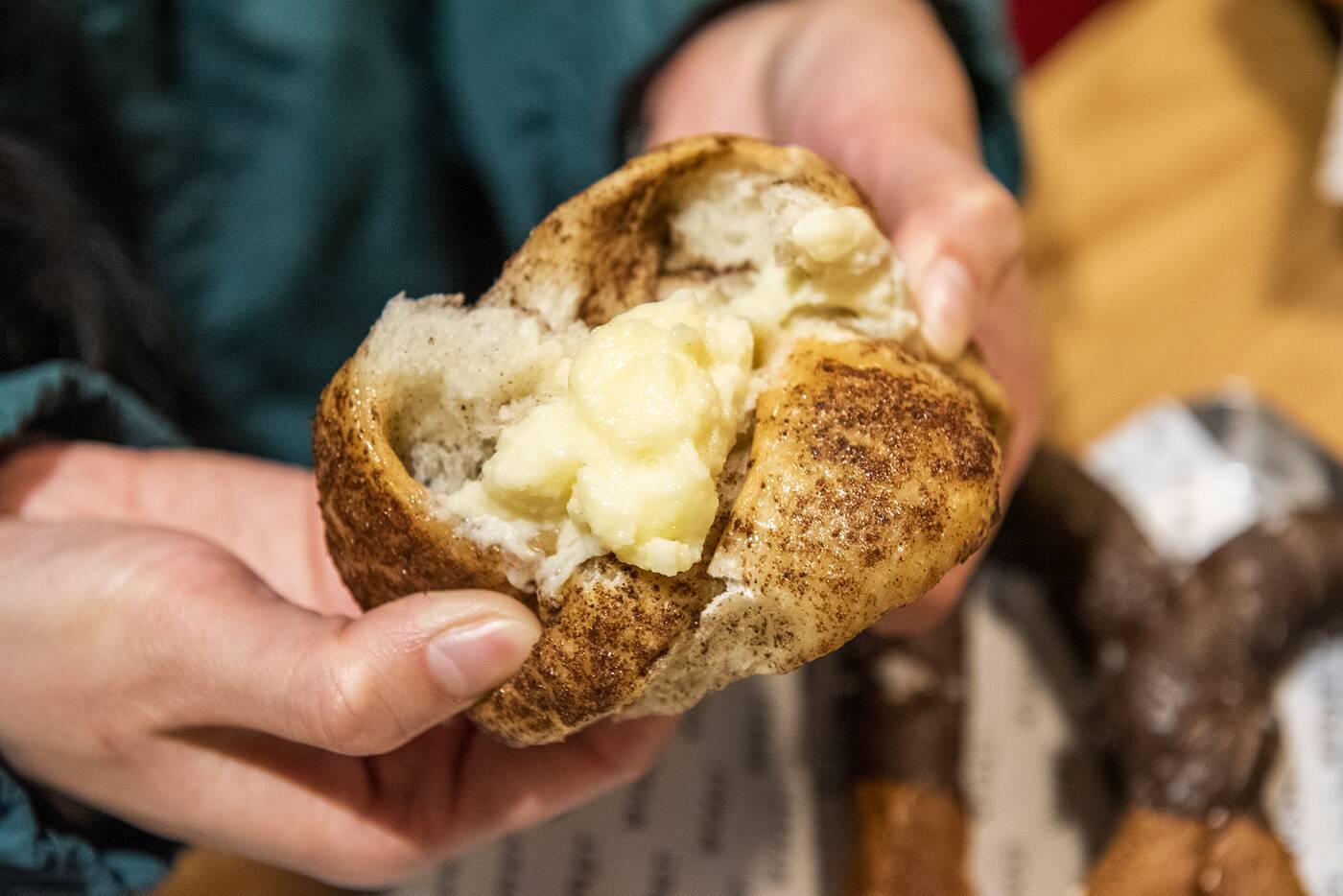 And for those who want to indulge in a cinnamon bun, Wvrst makes its own gooey version on a pain au lait bun filled with cream cheese frosting.

It's not located in a nightlife district, but this version of Wvrst has a more central appeal for the in-transit crowds from all over the Toronto. 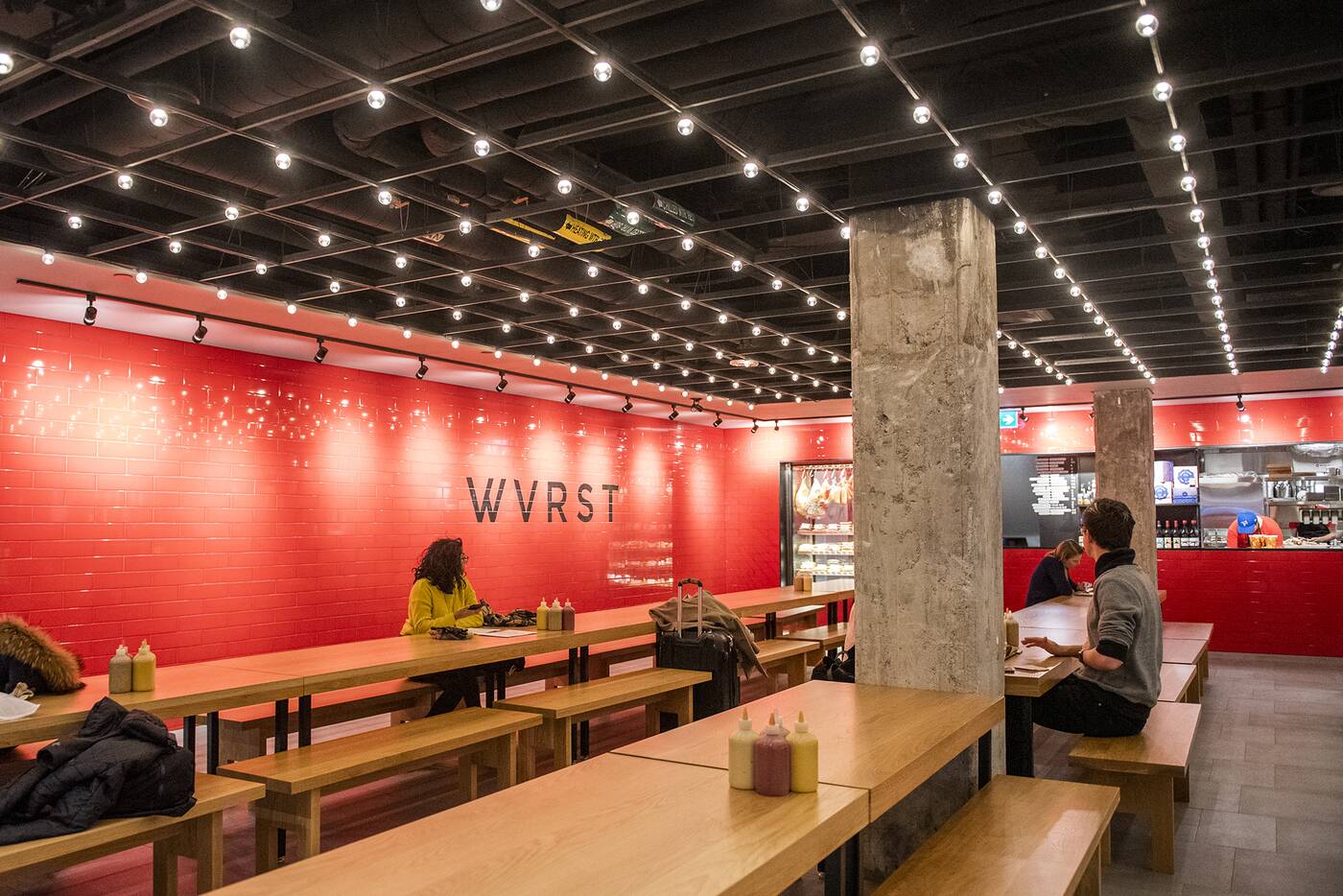