Update : Thanks to a reader tip I have confirmed that since my visit two weeks ago the restaurant has changed its name to Witches Table.

Soban's Witches Table's sign - Wednesday Special: enjoy seafood tempura and one beer for $3.50 - was enough to lure me in.

As I entered Soban Japanese and Korean Restaurant Witches Table, thinking wow, what a deal , I suddenly found myself in Anyplace, Asia. The room was metallic and minimalist with a touch of cute absurdity provided by accents like a large smiling giraffe sculpture. There was a scattering of customers, all youngish, dark-haired girls in bubble-gum tones, sipping bulbous bubble teas in soft beige booths to a soundtrack of easy-listening hip pop. The scene was reminiscent of your typical cafe that can be found all over East Asia.

The menu however, was more typical of the multitude of casual Japanese-Korean establishments in this city; those that offer a large menu with as many bibimbap as there are katsu-don choices. As a fan of such K-J places like, Hosu , I dig being able to order maki as much as I do getting those complimentary little starters. 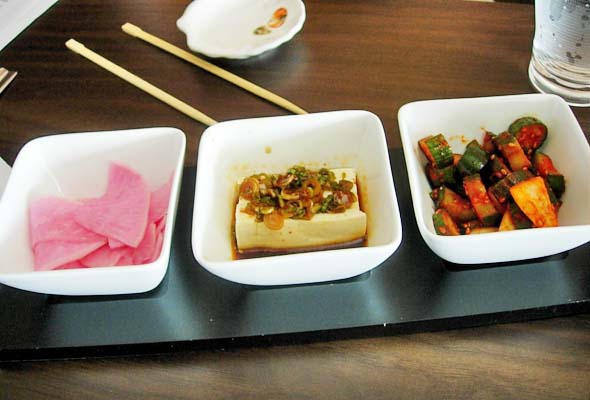 On this occasion, they were a trio of cold dishes: pickled pink daikon, soft tofu sitting in soy sauce, sesame oil, scallion, and kim chee cucumbers. The tart tastes sure spurred my appetite. 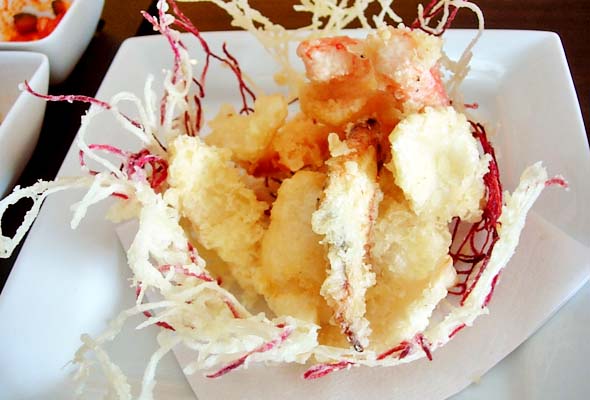 We did order the "special" seafood tempura ($9.95), which turned out to be a sizable portion. Hot out of the fryer slices of golden battered salmon and white fish were tender and flaky - without any vegetable filler - arrived in an edible basket of deep-fried shreds of tubers. 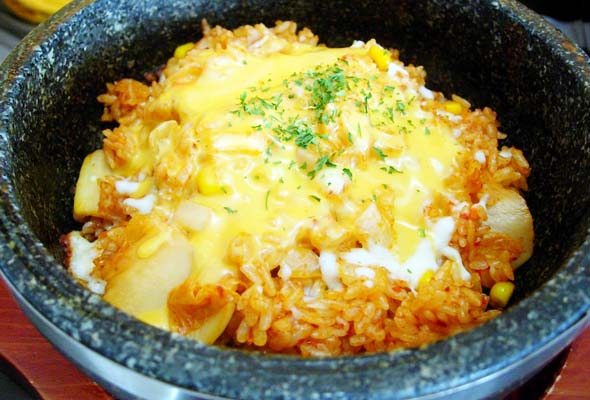 The bacon cheese bibimbap ($8.95) piqued my p-i-e's (partner in eating) interest and had to be tried. It came to the table dolsat-style (hot stone pot) and was basically rice coated in a mild red sauce, covered with processed cheese, and no sign of bacon. After one bite I was glad that I wasn't the one who had to finish it.

My order of crunchy roll ($6.95) and spicy salmon roll ($5.95) came out together gloriously plated with veggie flowers and saucy splashes. The first roll had a center of purple crisps (similar to what the edible basket was comprised of) and was topped with avocado. The combination of rich avocado, al dente rice, and crispy tempura bits was highly addictive and surprisingly filling. Spicy salmon was also a hit. The silky salmon filling was generous with a hit of heat and the dusting of that same crunch added a nice contrasting texture.

When the bill arrived we realized that the special had been misinterpreted (an order of the seafood the tempura brought the regular price of one bottle of beer down to $3.50 and wasn't the total price for the two). I didn't mind. Finding yummy crispy avocado rolls made up for it, and perhaps too a lesson learned in skipping any future cheesy Korean combos.