Originating in Vancouver, all Italian-inspired pies here are made from scratch in house, and that includes a three-day dough and all vegan cheeses and sauces. 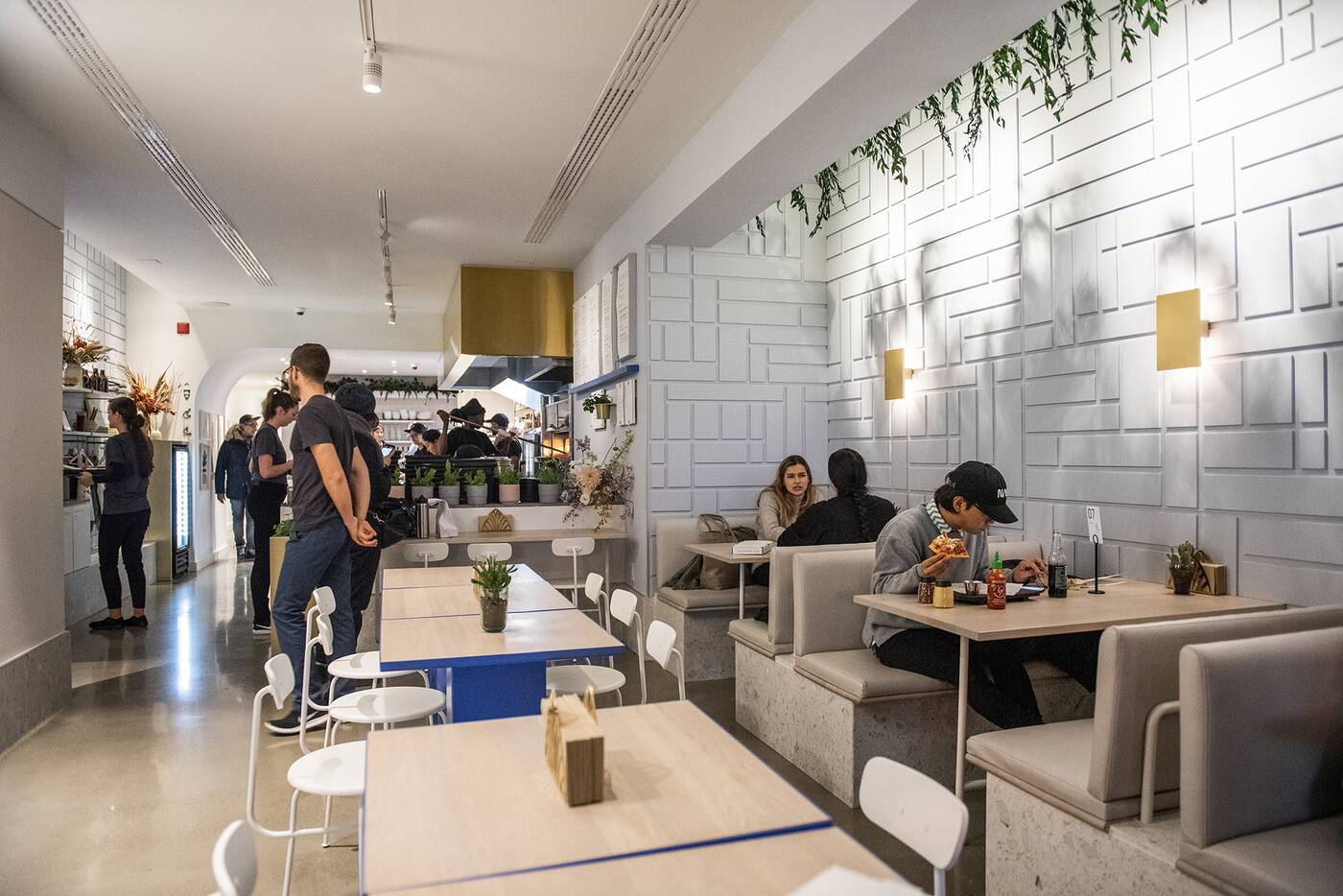 The 28-seat space has an elevated feel for a fast casual pizza place. 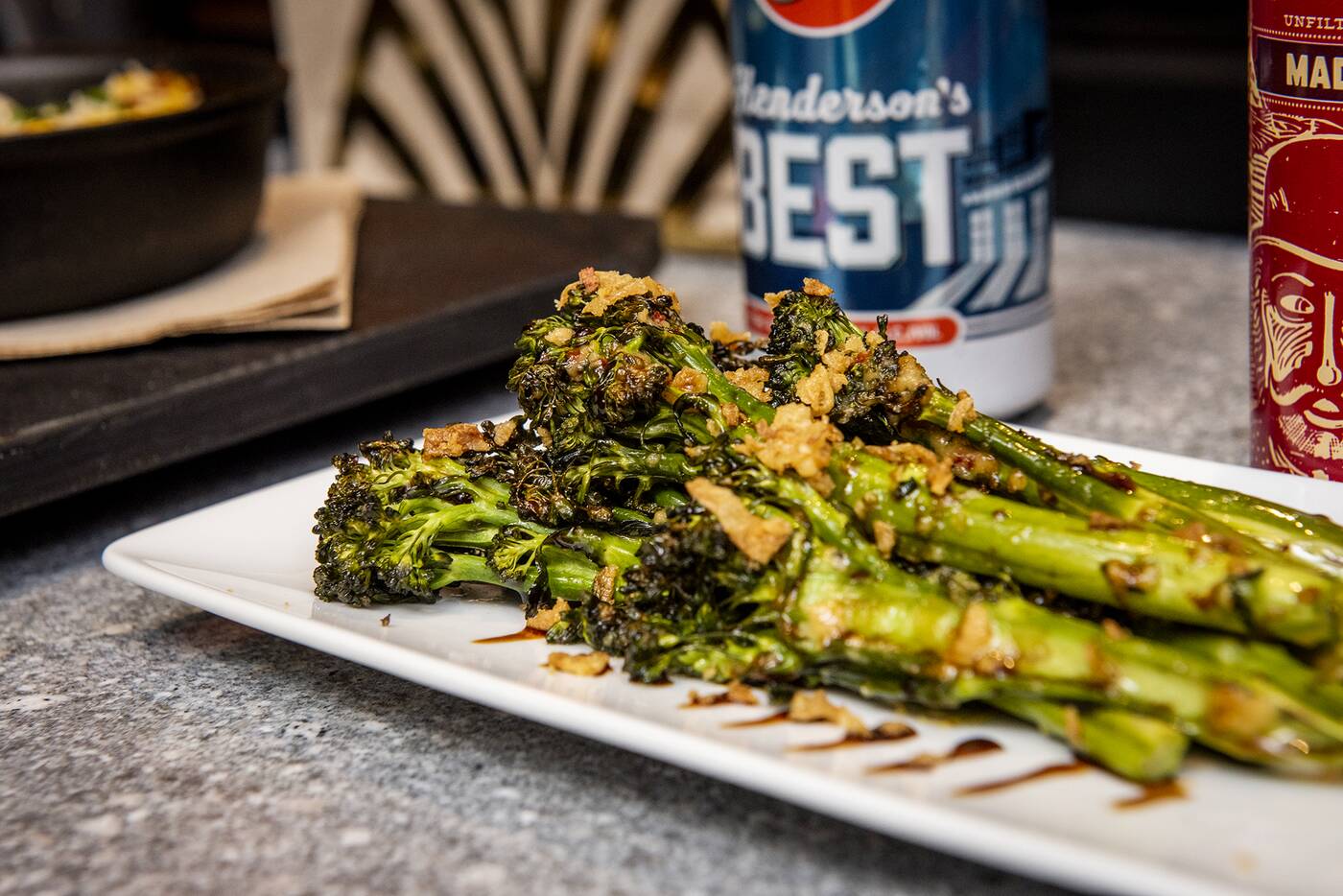 Broccolini ($9) is one of several small plates that also help bridge the gap between a high-end and greasy pizza spot, this one actually only available in Toronto.

Doused in a savoury miso garlic sauce, drizzled with sweet soy and enhanced by fried shallots, the fibrous stalks are charred but snappy. 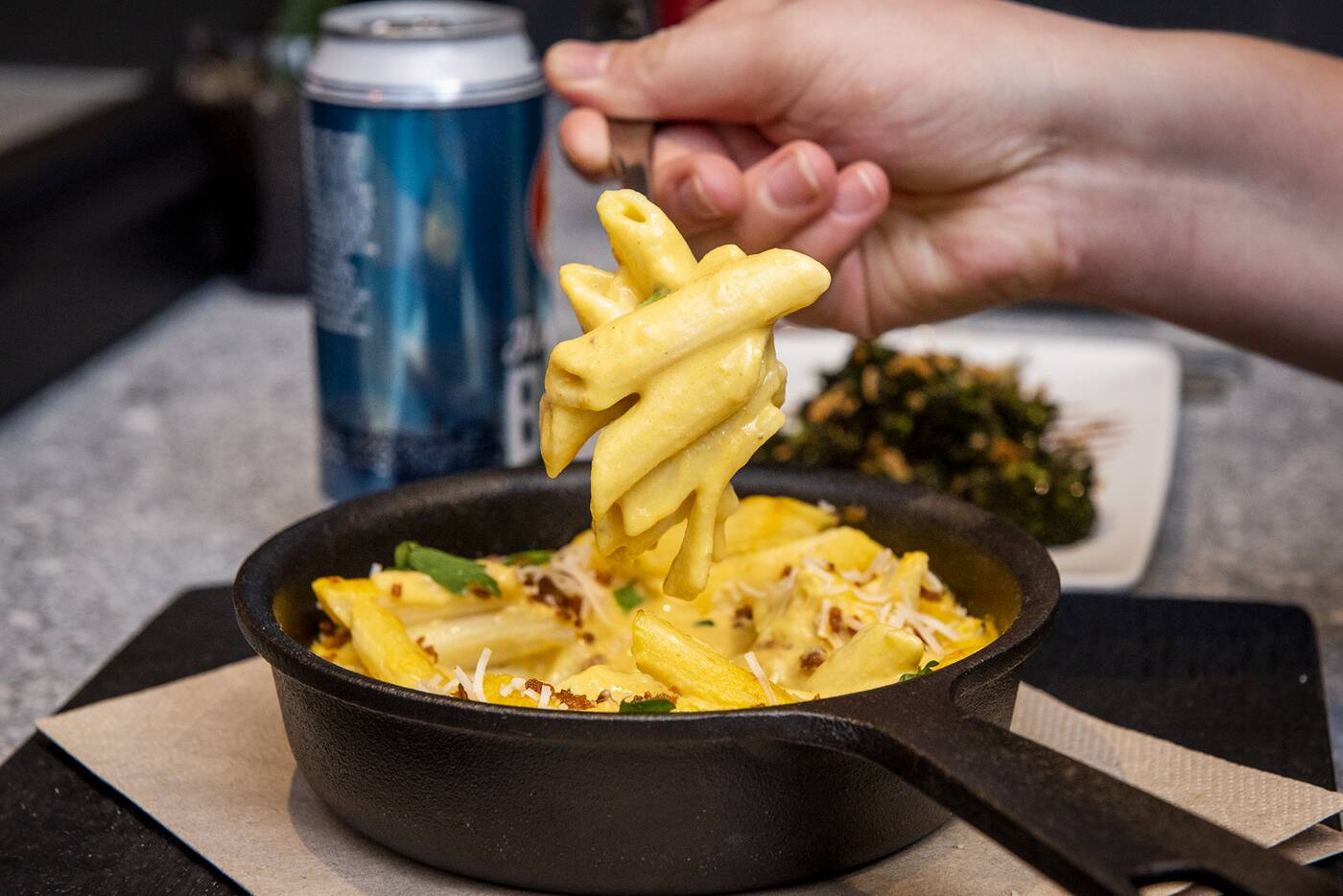 Mac + cheese ($11) smothers penne in a creamy cashew cheese sauce made from a mix of veggies that’s really more its own thing than an imitation of any kind of cheese, much thinner and earthier without the stretch and gooeyness of the real thing. TVP bacon, parm and parsley are scattered over top. 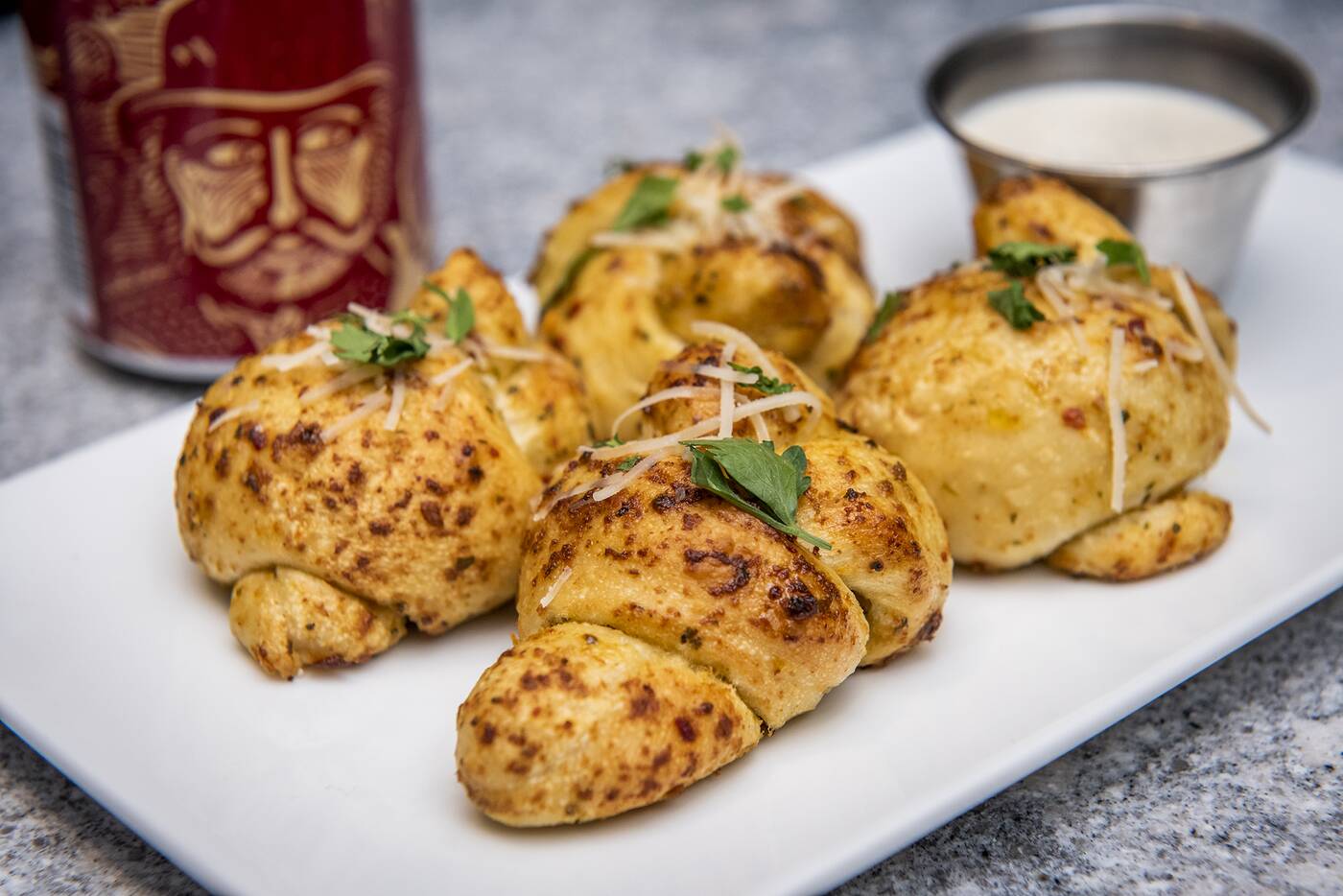 Garlic knots ($6) are closer to true pizzeria fare, made from the same stretchy three-day dough as pizza crusts, coated in chili and tied in knots. 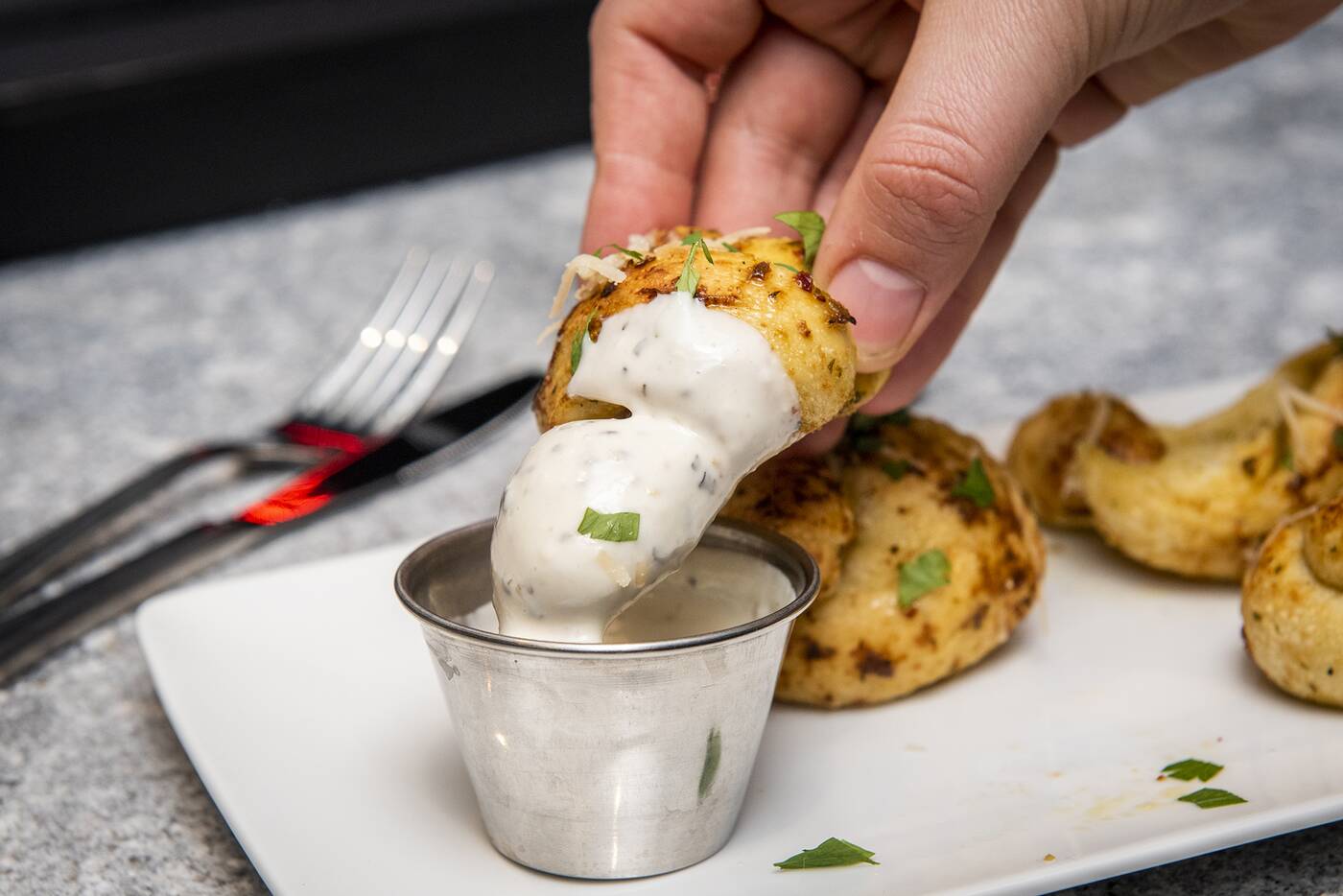 Finished off with a little parm and parsley, they’re a great vehicle for a punchy garlic ranch. 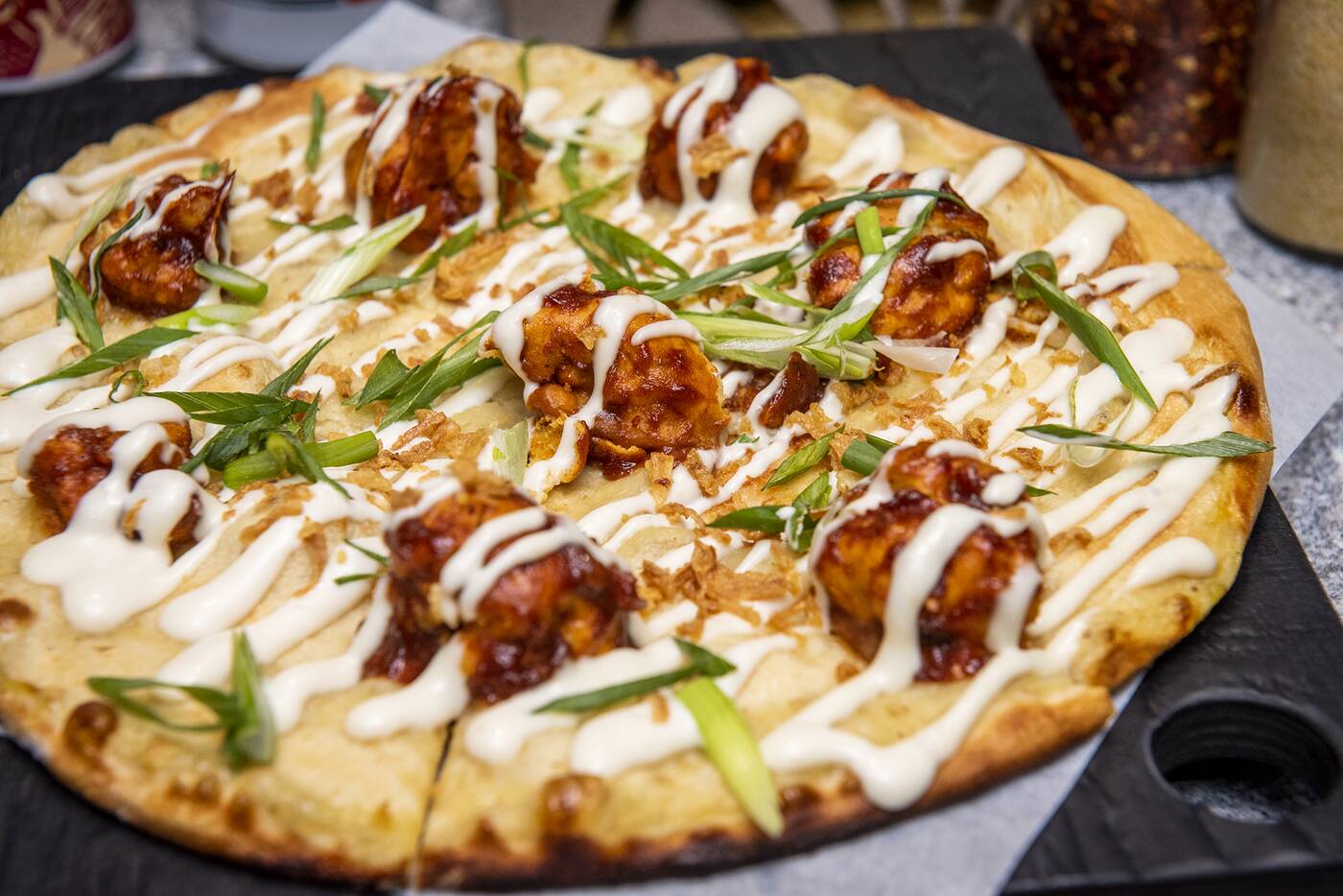 Stranger Wings ($15) stars here, one of the first pizzas Virtuous Pie ever put out. One of their white pies with a bianca cauliflower sauce base, spicy buffalo cauliflower florets are dredged in a chickpea flour paprika mixture, baked, and coated in a sriracha and barbecue sauce. 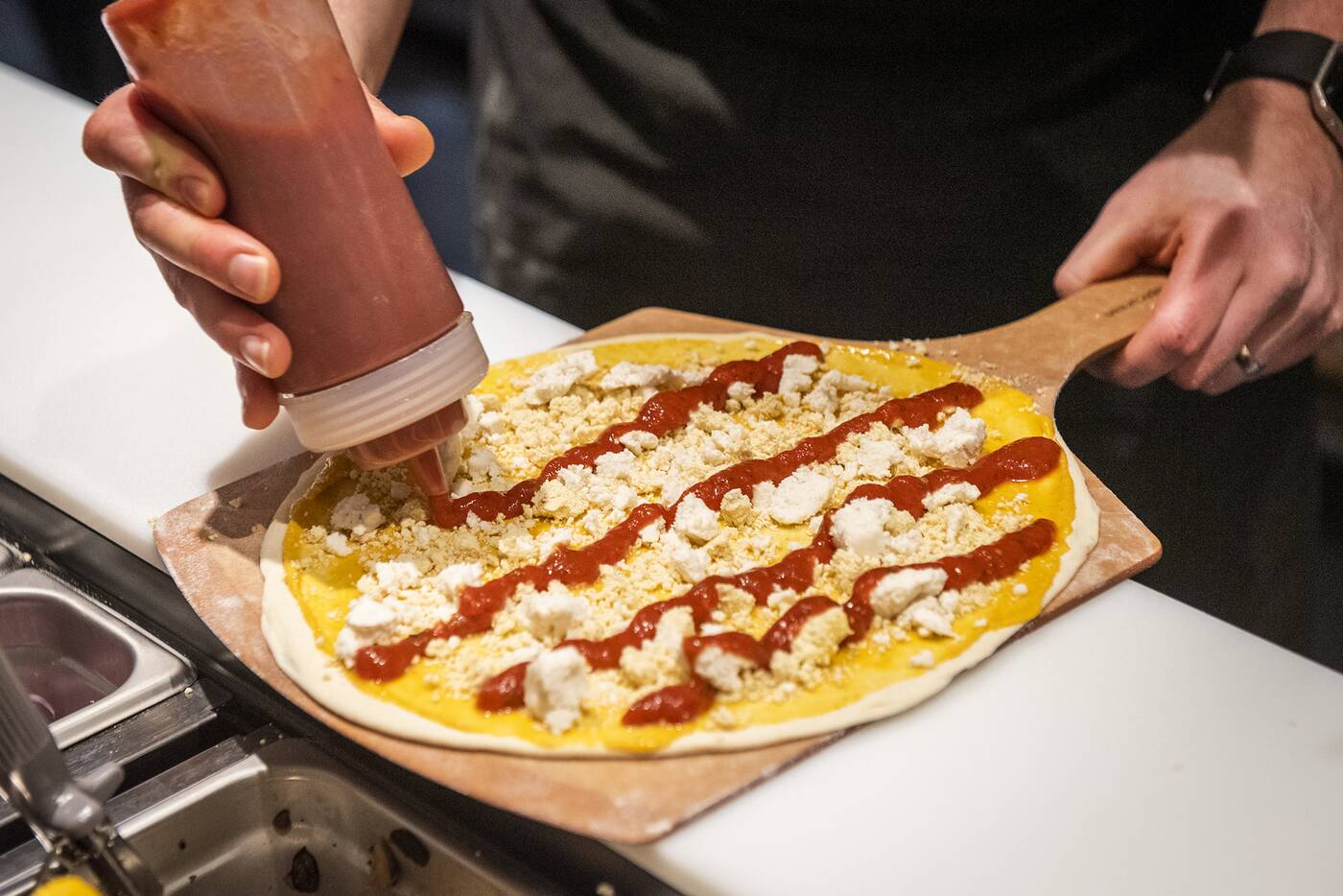 The Grandma Pie ($13) is more a play on a traditional rectangular grandma pie, a base of cheddar cream studded with cashew mozzarella and queso fresco, sweet San Marzano sauce drizzled on in stripes. 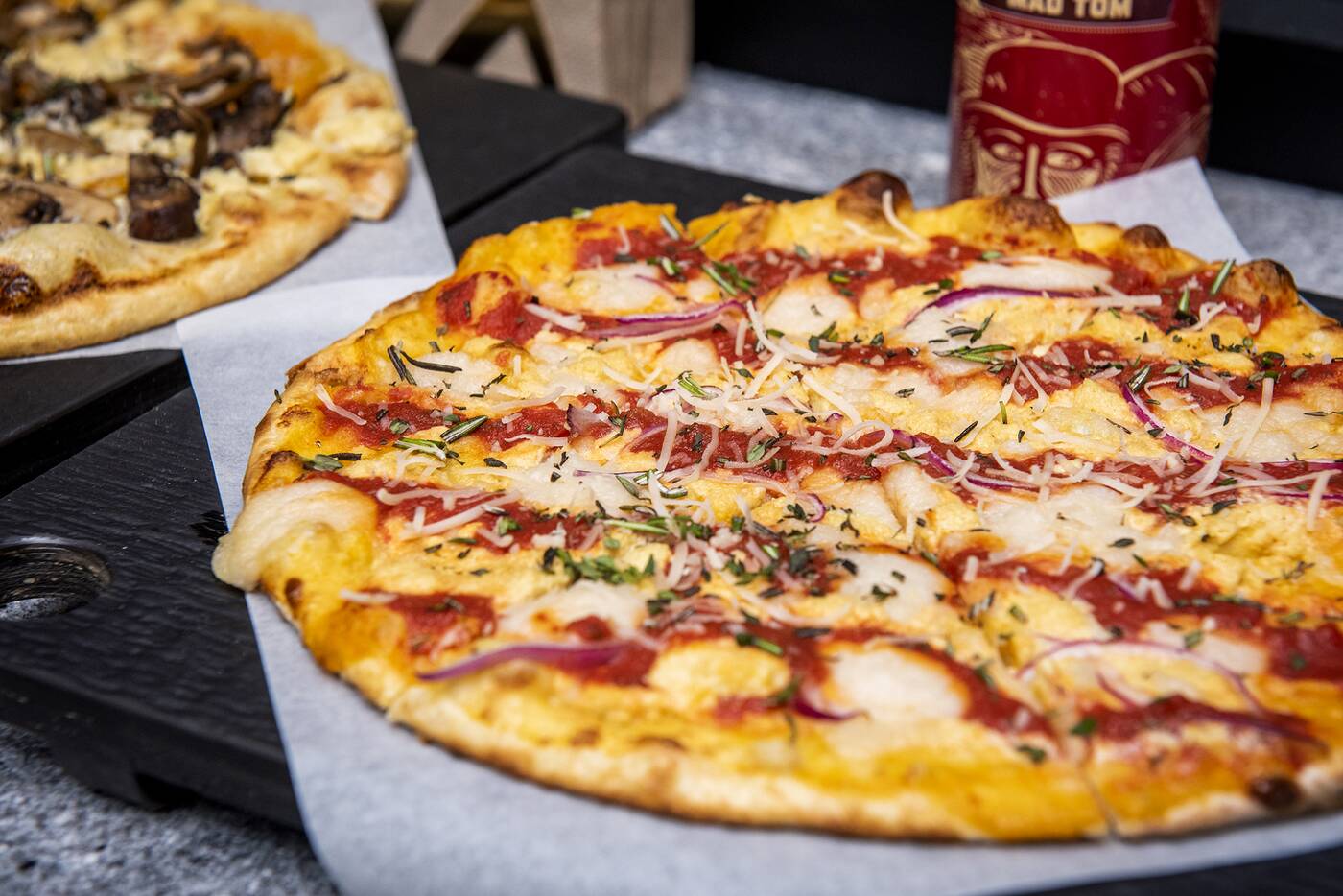 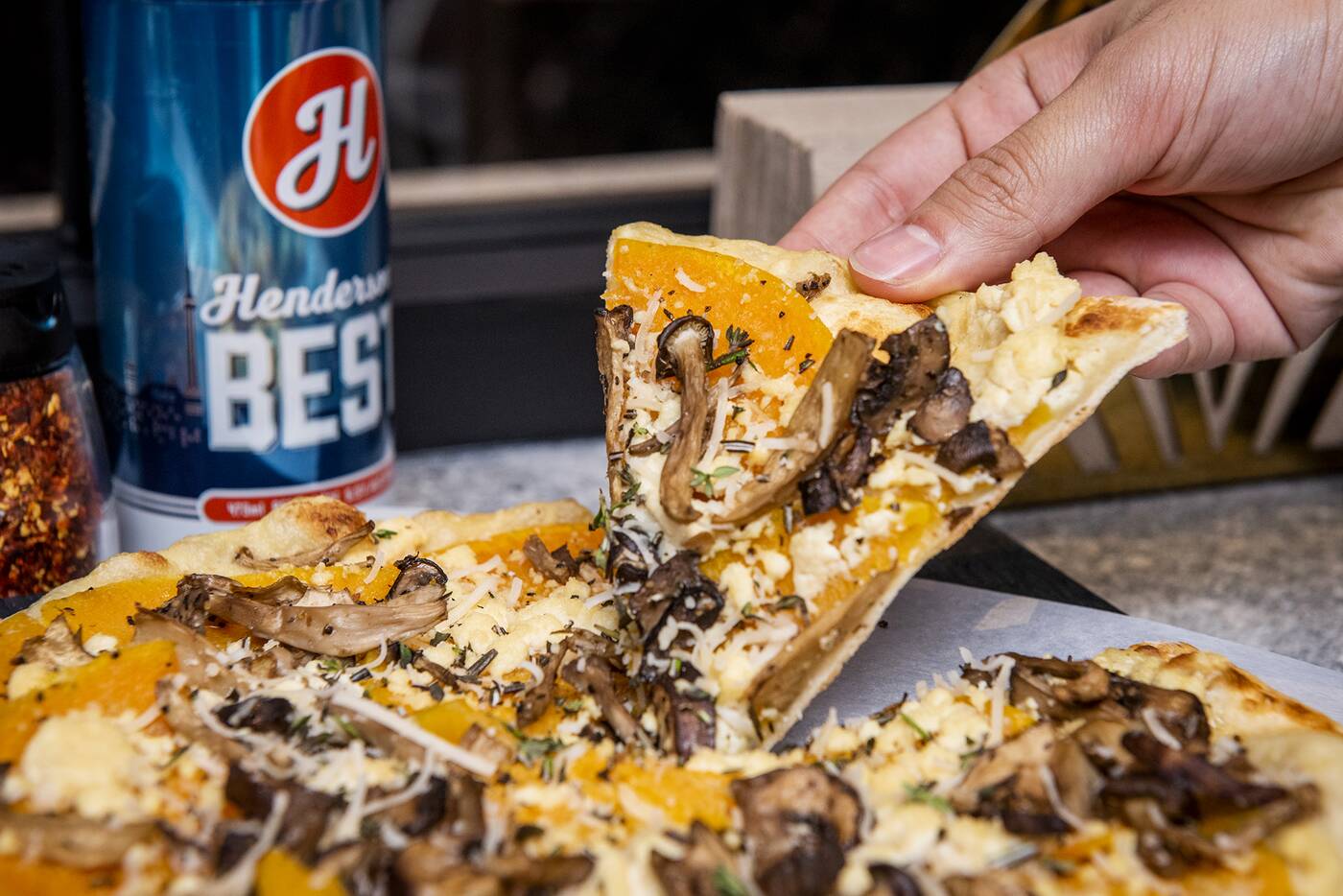 The Harvest ($13) is also particular to this location, a bianca pie with earthy but sweet roasted acorn squash, chewy mixed wild mushrooms, a tofu-based cheese crumble, parm, and a touch of maple syrup, rosemary and thyme. 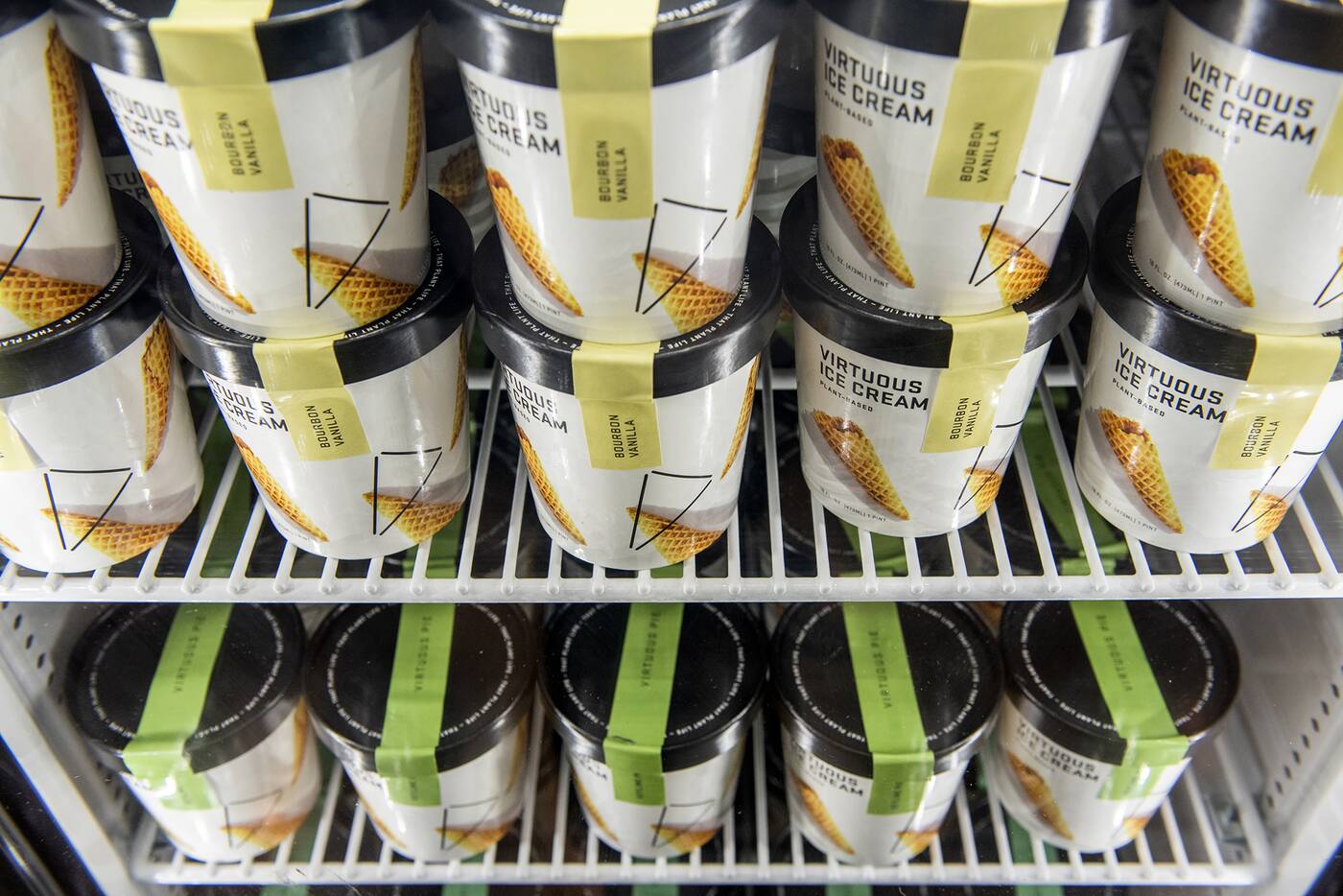 They also make vegan ice cream in house, pints in flavours like key lime pie, bourbon vanilla and even a “Mermaid” flavour made with spirulina and maca going for $11. 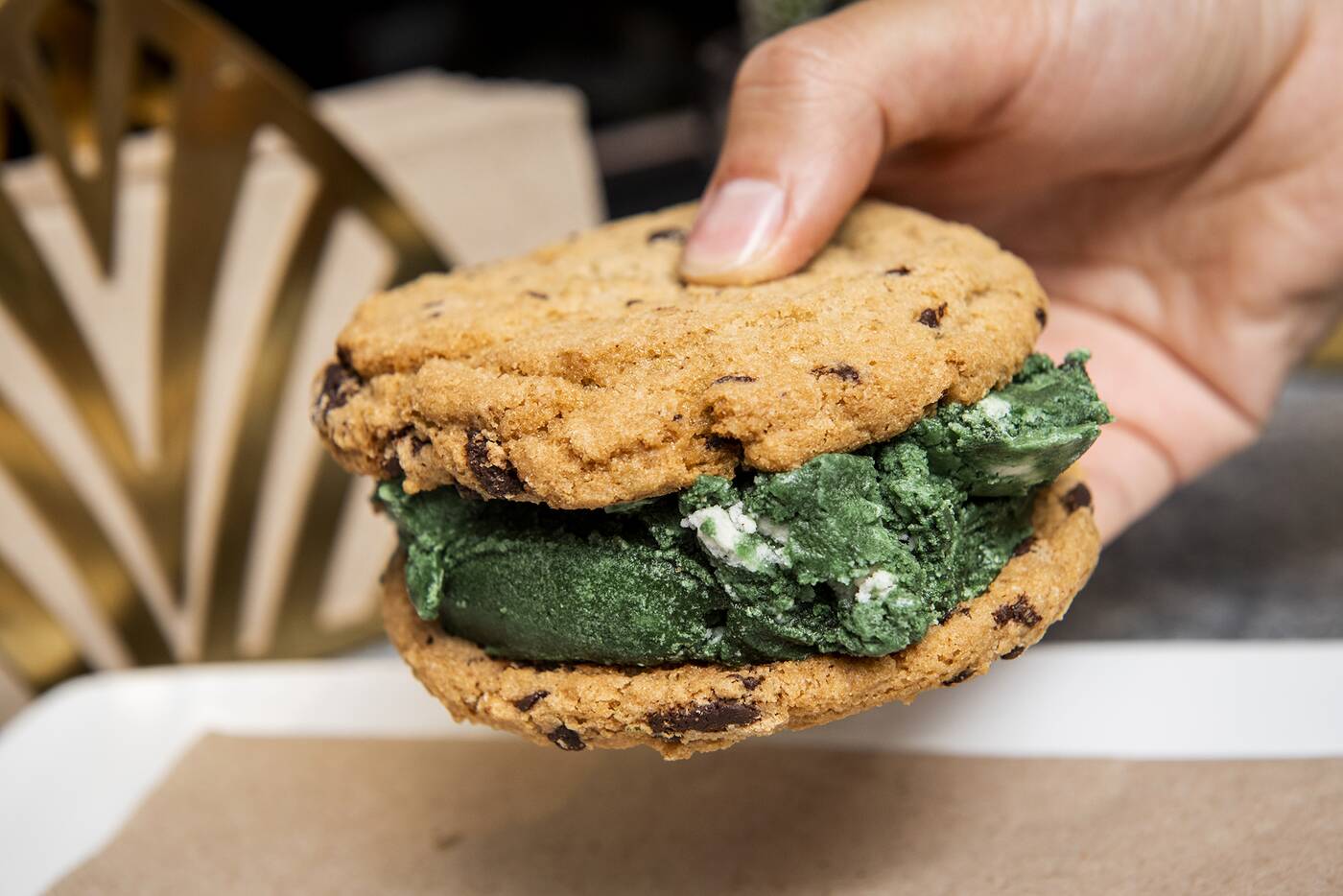 Ice cream sandwiches ($8) are served on house-baked cookies with options like chocolate chip. The Mermaid ice cream doesn’t taste as bizarre as it looks, creamy and a little grassy. 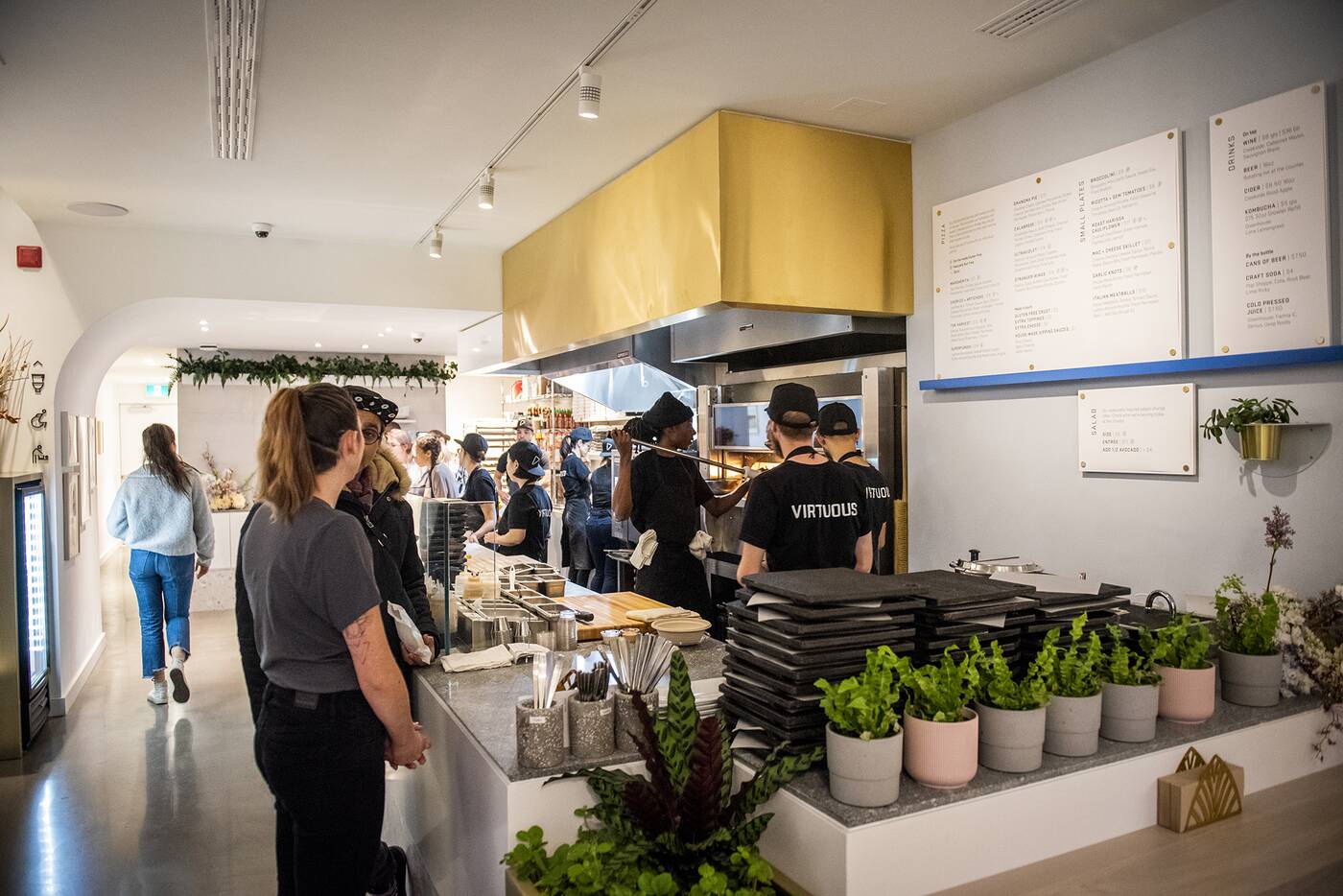 North of Brooklyn on Rogers Road