Uncle Betty's wants your kids. I know that sounds like a public service announcement about a neighbourhood deviant, but it's more an observation I make as I sit waiting for a table at this new Yonge and Eglinton area diner full of young, vibrant families.

On top of this being a sit down restaurant, Uncle Betty's also acts as an ice cream parlour , serving up scoops of Greg's ice cream in cups, cones and sandwiched between freshly made Dreesen donuts (similar to the ubiquitous Tom's Donuts from the CNE). The pitter patter of little feet scamper by our waiting area, bringing with them a parade of parents to the ice cream counter like moths to an icy flame.

Adding to the kids vibe, the decor of the narrow space skews decidedly "fun". Turquoise counters and a youthful orange accent wall compliment the more mature and contemporary dark stained wood floor. The logo features a mustachioed word mark that looks straight out of a Hanna-Barbera special.

The space is somewhat narrow but extremely bright, thanks to the colours and the fact the restaurant is at the end of a row, allowing windows to wrap around two sides. The front of Uncle Betty's opens up entirely to a patio and tables throughout the space are very generously laid out, leaving more than ample space for the parking of strollers (a necessity judging from today's neighbourhood crowd) and the ogling of passing pedestrians. 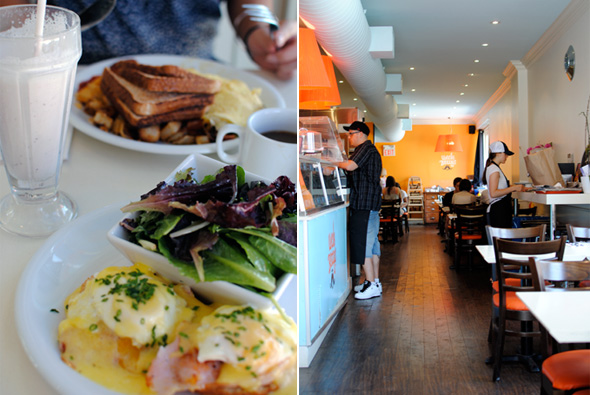 Service is cheerful if not a bit slow, as a small group of patrons including ourselves wait roughly 20 minutes for tables despite the restaurant being just moderately busy. Having only been open for a handful of months, the sheer enthusiasm of Uncle Betty's' servers forgives the lacklustre wait times (our food would ultimately also takes a good 25 minutes to arrive). One hopes for their sake however these kinks are worked out sooner rather than later.

Although a diner menu is served here, today we opt for brunch options. The choices being fairly routine, I go for the eggs benedict ($12) that is, interestingly, served on donuts instead of english muffins. I pair it with a strawberry milkshake ($5.75). My companion elects for a bacon and mushroom omelet ($15) with sides of sausage and home fries.

The donut-eggs arrive as advertised, a generic spring mix dressed with balsamic vinaigrette on the side. The eggs are slightly over poached but the lemon hollandaise is a pleasantly zesty surprise. The star of the plate, the donut, is halved and somewhat stale and crumbly, bringing a mushy, sweet element to each mouthful that is unique but loses its novelty quickly. The peameal bacon everything sandwiches is well prepared and provides a bit of a reprieve from the overarching sweetness of the plate.

The milkshake I'm sucking down alongside the eggs is excellent. A traditional shake, it's viscous enough to make drinking with the straw difficult and the Greg's ice cream is delicately flavoured, without any of the artificial strawberry aftertaste so infused in fast food version of this treat. 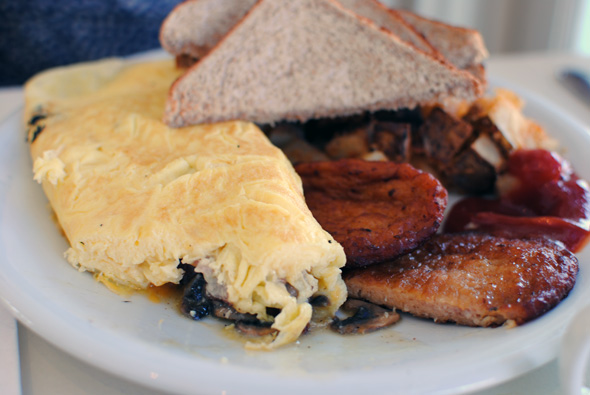 My friend's omelet is a generous portion of egg wrapped around strips of bacon and button mushrooms. It's a fairly utilitarian version of an omelet, also slightly overcooked and rolled somewhat like a burrito.The accompanying sausage and homefries are decent, but nothing to write home about.

When we get the bill (which also takes a little longer than one would hope) the server chats us up cheerfully and tells us about a dinner item they serve called the Ultimate Grilled Cheese. This is apparently a sandwich, stuffed with macaroni-and-cheese and your choice of pulled pork or meatloaf, all within a bun. 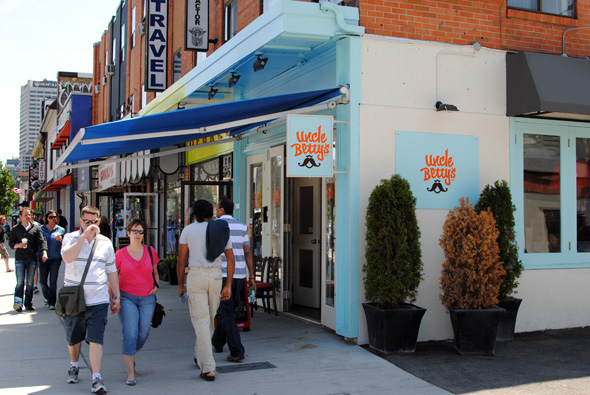 I've never eaten mac-and-cheese-and-meat inside a sandwich before and the novelty is undeniable. Again though, it's a dish that seems "fun", and if that's what Uncle Betty's is going for they've certainly nailed their niche. The food (for brunch at least) is just average considering the prices. This is somewhat of a letdown as the head chef at Betty's was once a sous at Coquine Restaurant .

Regardless, the ice cream, spacious seating and Dreesen donuts made in store should be attractive for local patrons wanting a place to take the kids that also has a liquor license.

The donuts, it should be noted, are made fresh several times daily but if you want to buy more than a dozen (which is not a lot in my mind) our server informs us you probably want to call and order in advance.

This being the first place in Toronto to make fresh Dreesen's donuts available, it appears the machine -- just like Uncle Betty's itself -- still has yet to hit it's stride.