The Senator has a long and storied history in the city's downtown core. The self-proclaimed "oldest restaurant in Toronto," founded in 1929 and open in its current iteration since 1948, is tucked unassumingly into a neighbourhood of hulking edifices like the Ed Mirvish Theatre and the Citytv building.

Inside, the building's history shows; it's like a diner from a hardboiled detective novel (save for a few anachronisms, like a fancy red Coke fridge). Maroon-stained wood booths, few of them larger than a four-top, create a grid that criss-crosses the restaurant. On the walls, the building's past life as a jazz club is immortalized in the form of colour-saturated portraits of musicians. 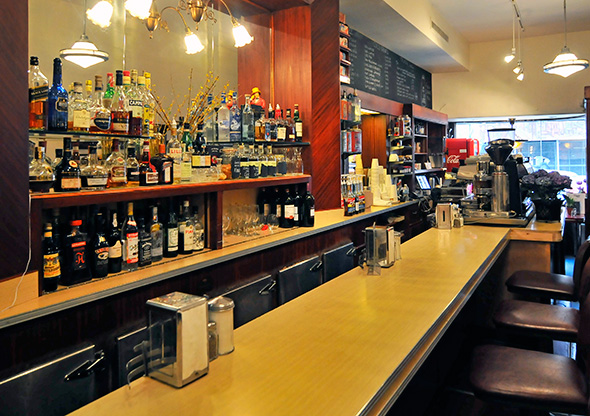 After decades of steadily dishing out diner favourites, the Senator has recently made an effort to reinvent itself with the addition of a new dinner menu and a weekend cocktail event (during which the diner rebrands itself as 'Bar Senator'). It's an astute enough plan; though the diner's Dundas and Victoria location is super-central, just a stone's throw away from Ryerson and the Eaton Centre, it isn't known as a destination for younger diners or the evening crowd.

When I stopped in for a late lunch, the choices were limited to to the classic lunch menu, which sticks to standard greasy-spoon fare and a few retro picks like crab cakes, wedge salads and liver and onions. 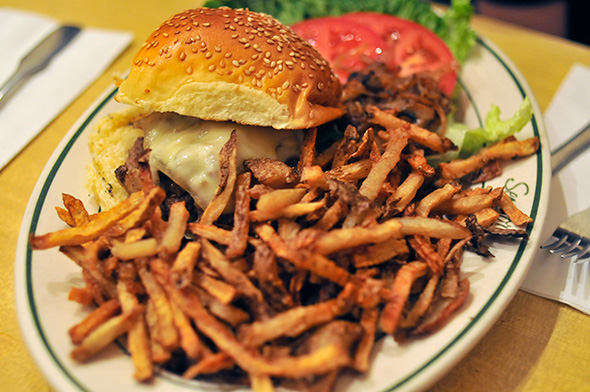 On the (very, very enthusiastic) recommendation of our waitress, I opted for the burger. The 6 oz. Cumbrae's patty ($6.95) comes with your standard tomato, onion and lettuce, with the added bonus of sauteed onions and corn relish; I topped mine off with some Swiss and mushrooms. It was the epitome of a killer diner burger - moist and falling-apart, with a little extra richness from the egg bun and the sweet, mega-caramelized onions.

The sides, however, didn't quite stand up. The side salad I ordered showed up as a side of fries; the waitress immediately recognized the error, and brought greens on top of the shoestrings. As it turns out, neither was a winning choice. The fries were overcooked and got unpleasantly crunchy as they cooled, while the salad dressing could have used a healthy dose of vinegar and salt. 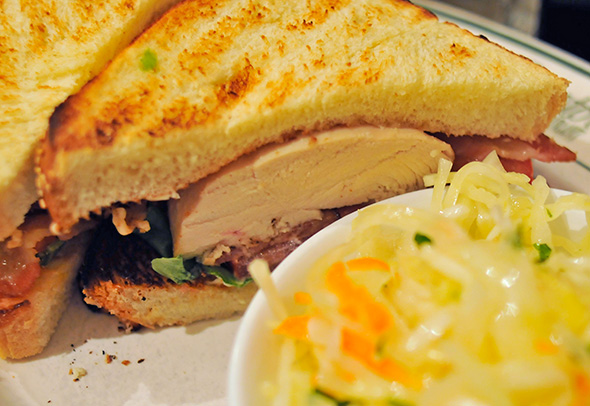 Other entrees were similarly uneven. The club sandwich, according to my dining companion, was "actually just a huge chicken breast" - an unpleasant enough experience that not even the challah toast could do much to help. 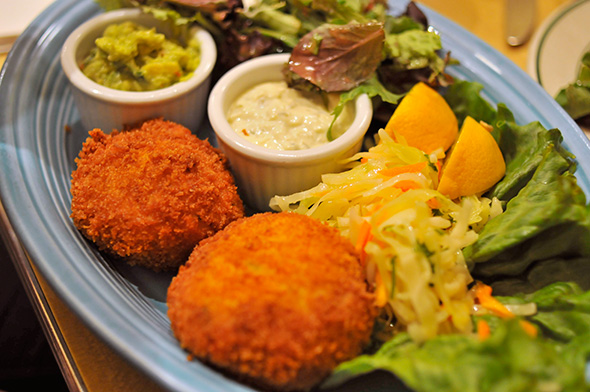 Crab cakes (made of "mixed seafood") were fluffy, with a crunchy, golden-brown crust on the outside, and contained enough crabmeat to merit the name. The fish and chips ($12.95), meanwhile, featured two healthily-sized pieces of battered cod atop a bed of fries that were far less scorched than my own. The verdict: Solid, but not about to swipe the title of the city's best fish and chips anytime soon (that would be these ).

Save for a refreshing, more-tart-than-sweet lemonade, I skipped the drinks. But the draft list is surprisingly sophisticated for such an old-school spot, with Beau's Lug-Tread and Amsterdam Downtown Brown for $6.50 a pint (with a guest appearance by KLB Raspberry Wheat). The new cocktail menu, too, is worth an eyeball, with a rosemary-cinnamon-espresso flagship drink and new takes on period-appropriate standbys like the Derby and Old Fashioned.

Ultimately, though, the attempts to draw a younger crowd may fall flat if the Senator loses touch with what makes a diner legendary: Reliable execution of comforting, classic dishes, year in and year out. (Don't ever change that burger, though. It's a winner.) 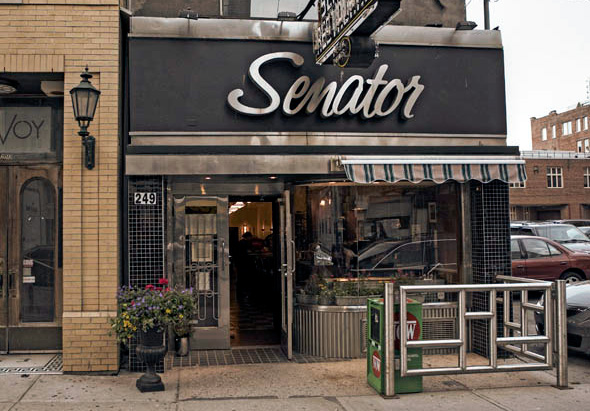