The Emerson recently opened in Bloordale Village , lending ever more credence to the notion that this neighbourhood is on the upswing, particularly with the Whippoorwill opening up just two doors down (which means you should start trolling real estate rags for property in the area).

The Emerson is instantly cozy, and that's thanks in part to the casual service, and especially the obvious camaraderie you can glimpse in the open kitchen. The kitchen staff sport toques, and have friendly huddles between plating. 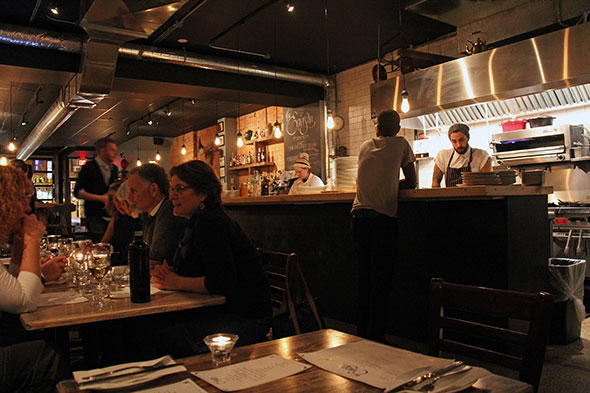 On a Saturday night, the space is bustling, but we're easily seated--thanks to the spacious dining room, which features communal tables, high-top and bar seating, as well as more intimate 2-seater tables in the back. It's dim, but not eye-strainingly so, and it has the same worn wood and exposed brick combo that seems de rigeur right now.

Never one to really be taken in by bikes hung on walls (which the Emerson has in spades), I admittedly think it's pretty cute to look up from your menu and spot all the nods to modes of transportation hidden around the room--it's an "I spy with my little eyes" of submarines and cars. There's even a motorcycle by the front window. 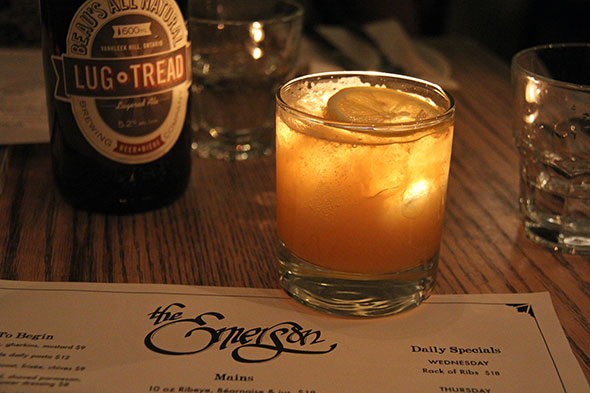 The drinks menu has some nice craft beers on offer (including Beau's, which arrives in its own oversized bottle), one or two wines by the glass in both red and white (and others by the bottle), and a short list of classic-with-a-twist cocktails (hallelujah). I opt for the Low Country--a blend of tart, sweet, and boozy thanks to spiced apple cider, bourbon, and a wedge of lemon ($11).

A word about the Emerson's menu: it's not especially accommodating to those with dietary restrictions (including, you know, vegetarianism). The focus here is on the meat, but starters like the kale and barley salad ($8) are a nice middle ground. The dominant flavour here was the truly unexpected dressing of anchovy and sunflowers, drizzled generously over a filling portion of kale, barley, and sharp shaved parmesan. 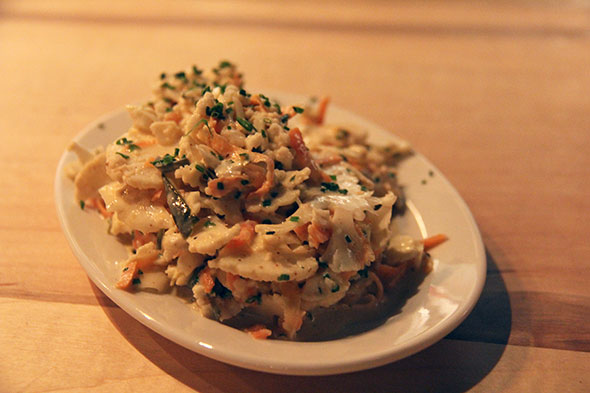 I'm a fan of Emerson's option to make a meal (and a half) out of all the available sides--for $20, you get decent portions of everything from fries to greens, but we couldn't resist ordering the daily pie--a very simple Shepherd's pie ($13), with mashed potatoes on top of rich lamb.

It was paired with a savoury sweet 'dipping sauce,' which we left mostly untouched, and in fact, the dish as a whole was too large for us--that's a whole lot of lamb, particularly when not broken up by the usual pub fillers of carrots or peas. 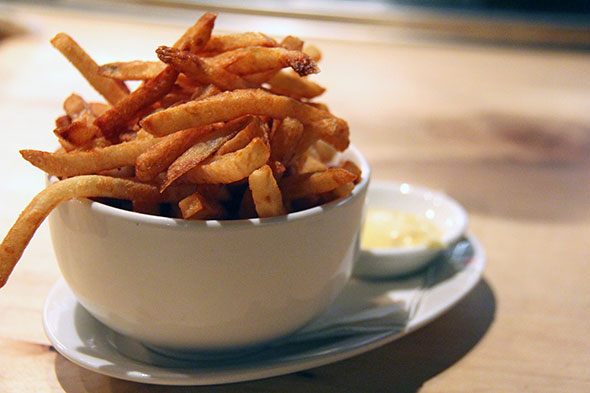 From the menu of sides, we choose the cauliflower slaw and the frites ($5 each). The former is inventive--cauliflower does yield a lot of crunch (and I might prefer it to cabbage), and the creamy sauce was accented by pickles, carrots, and what were likely chives. The fries were thinly cut, nicely fried, and sprinkled with thyme, and paired nicely with the garlic mayonnaise dip. 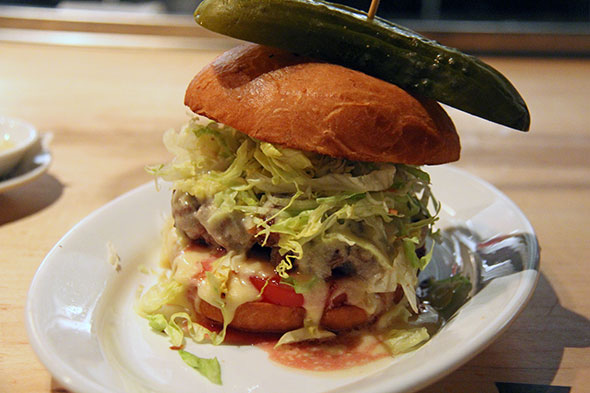 Then, there was the Emerson burger ($12). First, the good: the portion was well-sized, the Beemster cheese sauce was a surprisingly fitting complement to the meat, and although I might've liked the option to dress up the burger beyond lettuce, tomato, and the sliver of pickle skewered in the burger, the soft bun was fresh and fragrant.

Unfortunately, that same bun was no match for the dish's biggest drawback--I'm sure someone just got overzealous behind the scenes, but by the time I was ready to inelegantly chow down, the sheer amount of sauce had rendered everything soggy, and it became a knife-and-fork situation. A hurdle I put behind me, until I reached the centre of the patty and found it cooked rare--fine for some, maybe, but they should've asked beforehand. 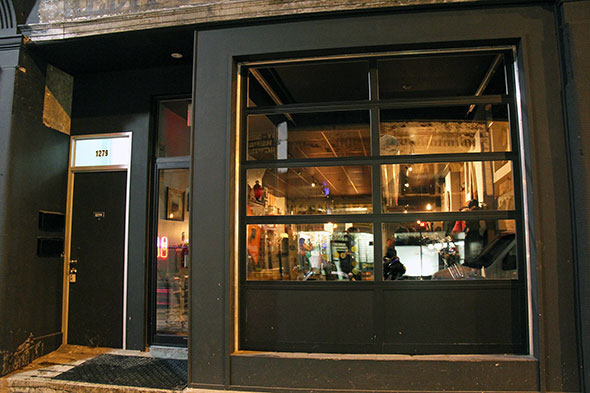 In short, the Emerson has a few kinks to figure out yet, but the atmosphere is certainly a great base to build on.