The Chase Toronto is currently open but their offerings and services may be affected due to the pandemic. Please contact the business directly for more information about any changes. Is this your business? Please contact us if you would like to update this message.

The Chase is the upstairs component of the highly anticipated pair of restaurants that have just opened in the Dineen Building at Yonge and Temperance. Located on what was formerly the roof of the building, the space features a gorgeous 75-seat patio with sweeping views of the Financial District as well as an upscale dining area marked by an open kitchen and indoor-outdoor bar. It's a stunning addition to the heritage structure and will likely prove a destination spot for the city's well-monied diners. 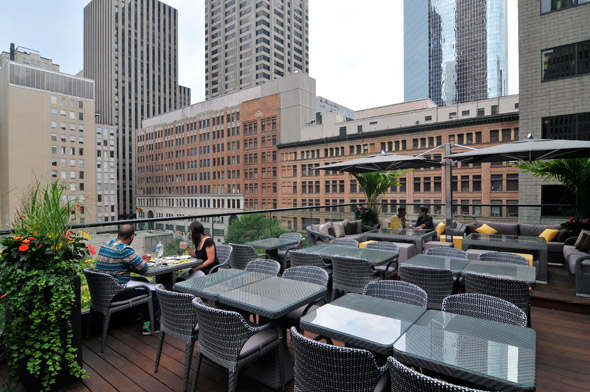 The two restaurant project comes courtesy of Steven Salm, the former general manager at MLSE's luxe restaurant, e11evn . Heading up the kitchen is Michael Steh, previously of Reds and Splendido , who's crafted separate menus for each space. Located on the ground floor, The Chase Fish & Oyster , lives up to its name with an obvious focus on shellfish and seafood. The concept on the top floor, on the other hand, is what Steh describes as "modern American," which he explains is basically fine dining without the pretentious baggage that so often accompanies the term. 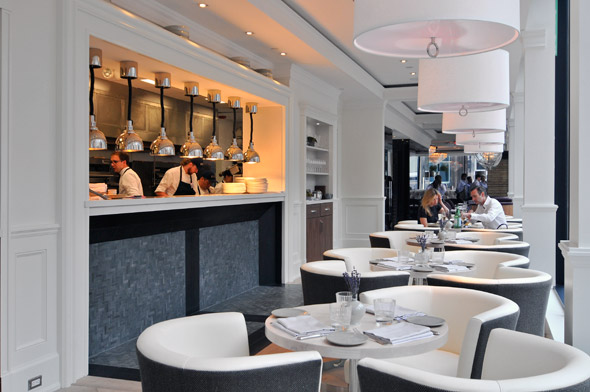 A quick glance through the menu generally validates this description. In the absence of a regional focus, the menu is diverse. Along with raw offerings and a la carte vegetable options ($14-$21), there's a wide range of proteins, from salmon ($30) to veal tenderloin ($38) to a whole roasted chicken for two ($71). 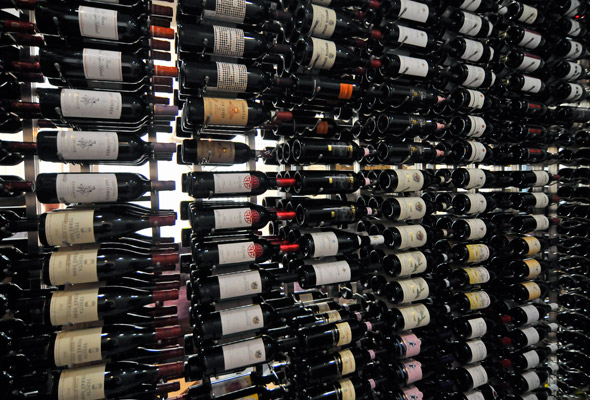 Stopping in for a pre-arranged visit in the late afternoon, we skip some of the more substantial items on the menu in favour of drinks and a few items to tide us over until later in the evening. Unlike the cocktail menu downstairs, The Chase goes a more traditional route, with seemingly basic offerings like the gin or whiskey cocktail ($16-$18). The latter is similar to an Old Fashioned, but adds BĂŠnĂŠdictine for a more herbal profile than is common. The wine list, selected by top sommelier Anton Potvin , is extensive and focused on Old World producers, but does feature a smattering of by-the-glass options ($12-30). 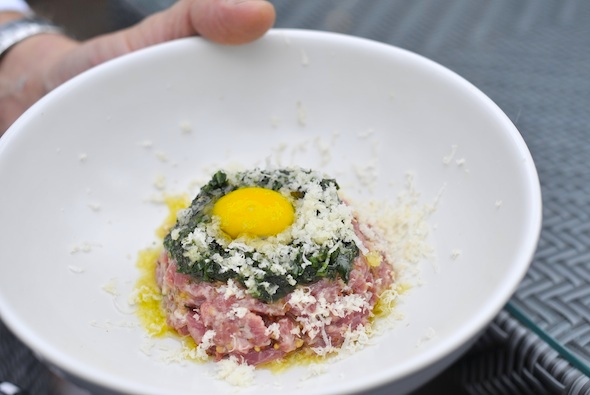 The steak tartare ($16) arrives elegantly topped with a quail's egg, before being mixed at table side by our server. It's a quick little ritual that's occasion for some customer/staff interaction and a good example of the desire to avoid being to prim and proper about plating and presentation. 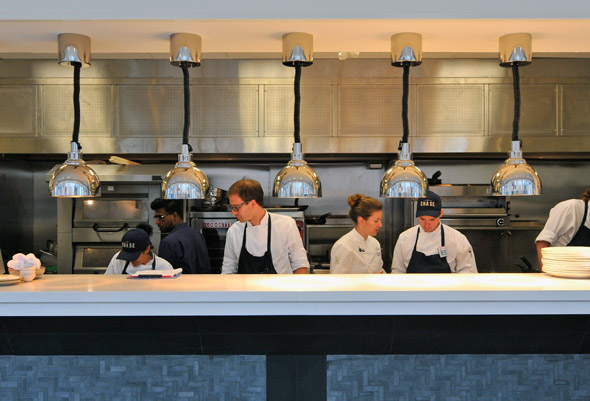 The portion size is substantial, and the dish well balanced. While it's easy to note the presence of horseradish and salsa verde, neither takes centre stage, which allows the beef to do the leg work. I'd prefer it to be slightly saltier (there's none on the table), but this is likely a manifestation of my own sodium addiction rather than a fault of the dish. 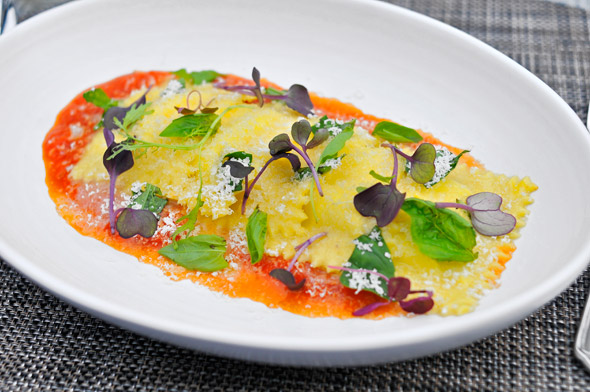 Next up is the smoked ricotta ravioli ($25). It's a simply presented dish with the pasta laid atop a bright red tomato sauce. While the smokiness is obvious, the house-made ricotta remains delicate, the creaminess meeting its match in the subtle acidity of the sauce. There's nothing spectacular about this dish, but that's precisely what gives away that it's been expertly prepared. It doesn't need any bells and whistles to shine. 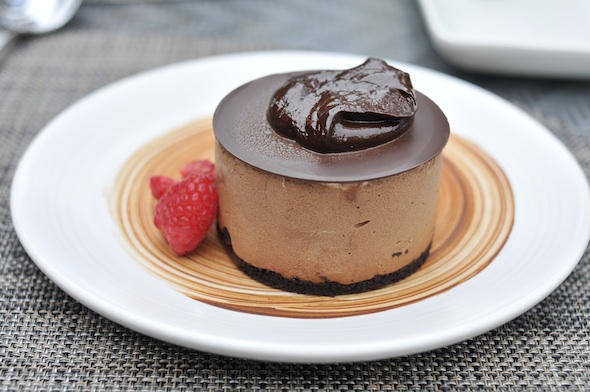 We try dessert in the form of chocolate cake ($12). Another simply presented plate, the flour-less cake comes topped with hot fudge that makes its best effort to melt into the hollow core of the dessert but never quite makes it. Deduct a few points for the failed table side theatrics, but it's not a major issue. The cake is rich but not heavy, composed of dark chocolate mousse, milk chocolate cream and hazelnut fudge. It's an exquisite dessert if you're a chocolate lover. 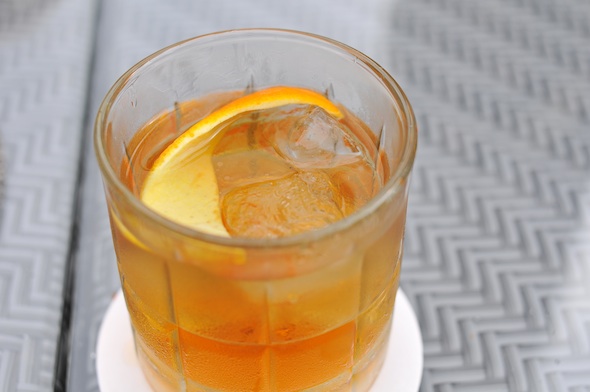 I linger for another drink post-dessert. This is a very nice looking place to spend time. Though I'm irked by some of my more yappy patio companions (put the phone away; you're just not that important), it's easy enough to push them to the periphery given the surroundings. The service still needs some polishing (we're still waiting on those waters, guys), but obviously friendly, which is the most important thing in my books. 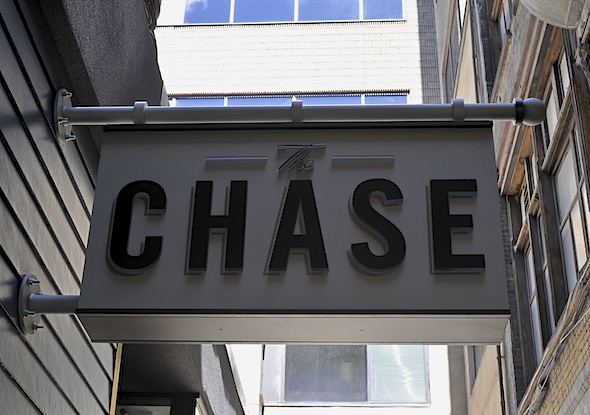