The Baro Chopped Salad Shoppe joins a slew of fast casual eateries at Queen and Spadina. It's a lighter alternative to the fried chicken bao and jarge style burgers that populate the area.

Owners John Gaganiaras and Bill Angelopoulos grew up in the business. The Gaganiaras family owned a wholesale produce operation while the Angelopoulos family were in restaurants. Neither felt satisfied with the existing salad options in the city and have set out to introduce this fresh take (already popularized in the U.S) to Toronto. 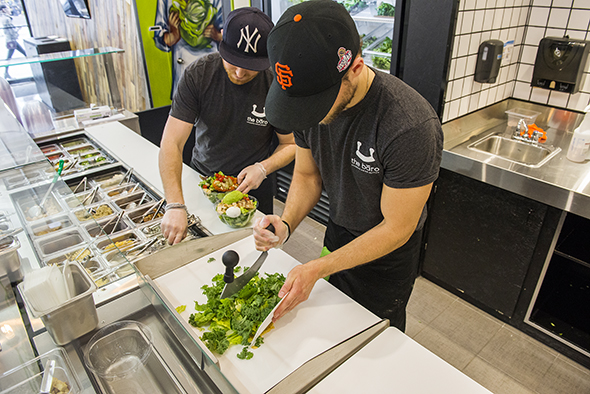 So what makes this salad shop so special? At the crux of the concept are whole ingredients diced to order with a mezzaluna, a two-handed rocking chopper. The idea is that fibrous vegetables just tastes better when diced to smithereens so that every mouthful is thoroughly coated in dressing and brimming with different textures and flavours. 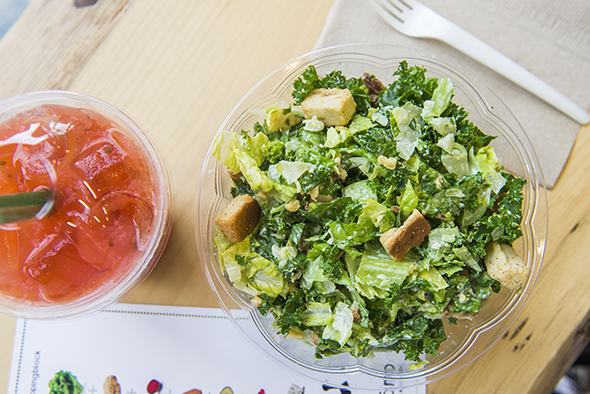 Anyone who's ever savoured Jonathan Waxman's confetti'd kale salad at Montecito will understand, and the kale Caesar ($9.20) at Baro isn't a bad alternative for two thirds the price and the convenience. 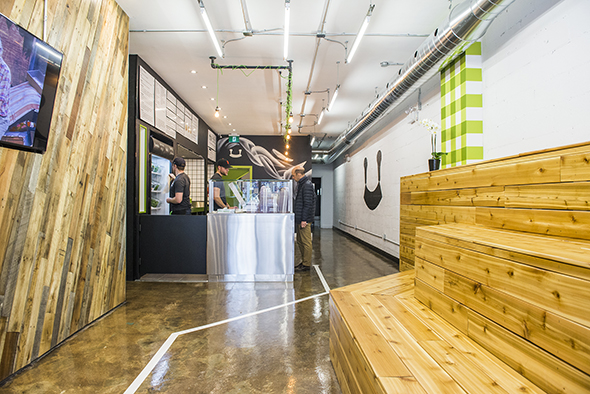 Baro operates primarily as a takeout operation, though there's a rail along the front window and a stepped platform that can informally seat a handful of diners. 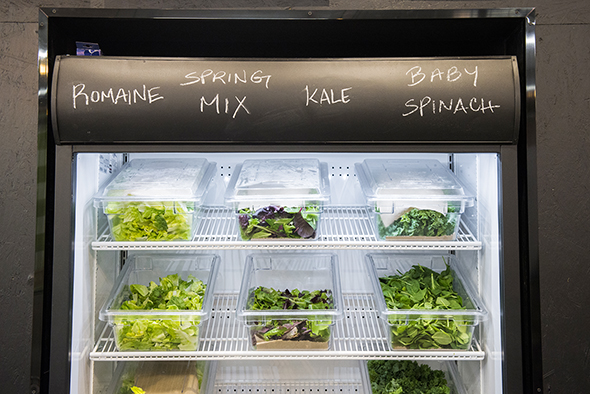 Ordering happens at the salad assembly line where the menu boasts nine predesigned salads and the option to customize from a choice of four different types of roughage (baby spinach, kale, romaine or spring mix) and almost 50 different ingredients, two dozen dressing and a handful of superfood boosters. 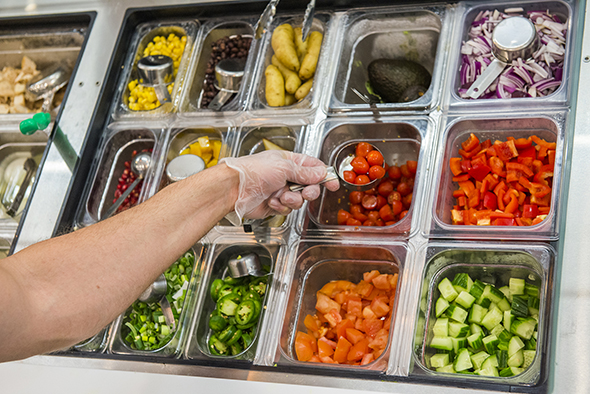 If going the build your own route, a small salad featuring any base and three add-ins starts at $6.50, while the large for $8.50 includes five selections. 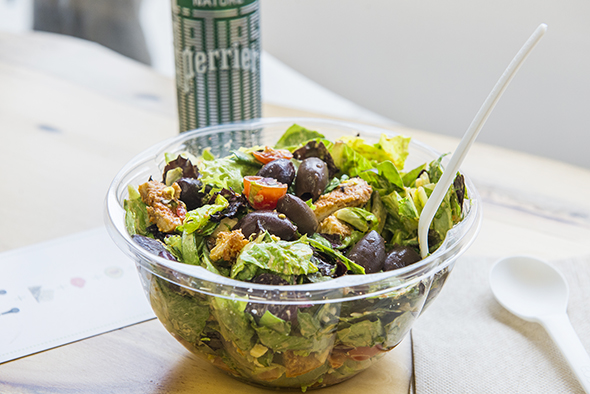 From the lineup of signature salads I try the Mississippi Flyer ($12.90). It starts with a base of spring mix and romaine to which Monterey Jack cheese and breaded chicken soaked in hot-sauce are added along with grape tomatoes, pickles and kalamata olives. 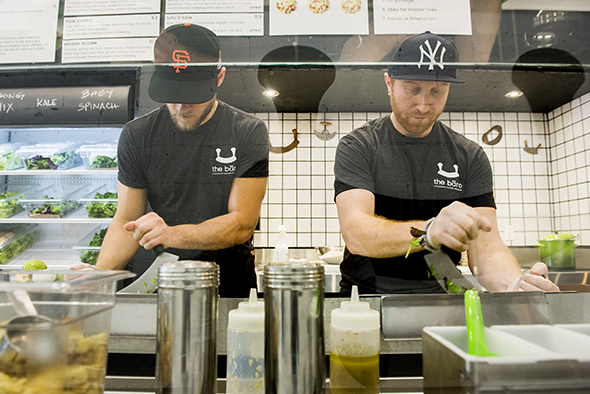 While the kale salad was great with an ultra fine chop, the desired coarseness can be specified and this one is better suited to a lighter grade. It gets finished with a toss in spicy ranch dressing and then packaged up in entirely biodegradable containers. 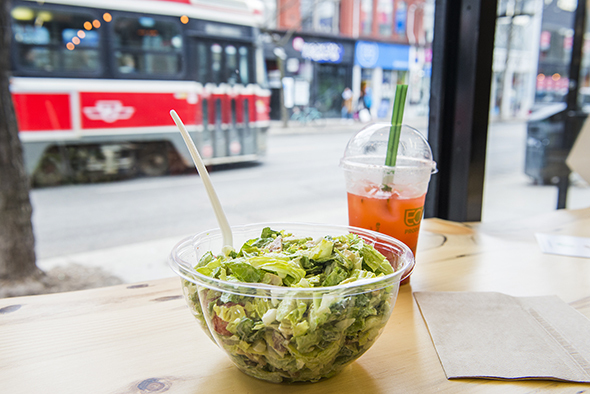 The Cobby Blues ($11) features a medley of romaine, chicken breast, bacon, egg, avocado, and grape tomatoes. The recommended dressing is a buttermilk blue cheese, but I could see it working with ranch or maple chipotle vinaigrette too. 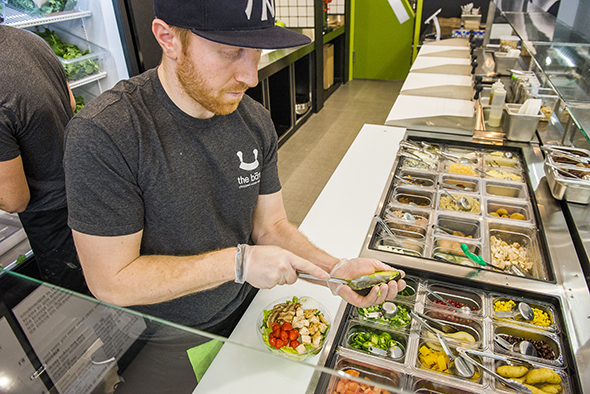 As I watch the ingredients poured out onto a chopping block to be minced, the thing that strikes me is how much I appreciate seeing the ingredients start out whole. Especially when it comes to poultry, I'm suspicious and have been previously duped by deli meat or some other processed abomination. 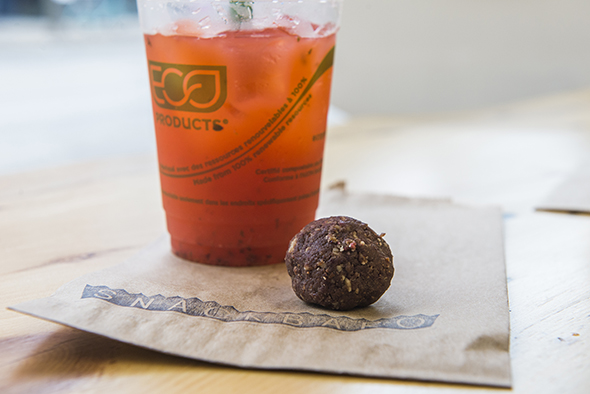 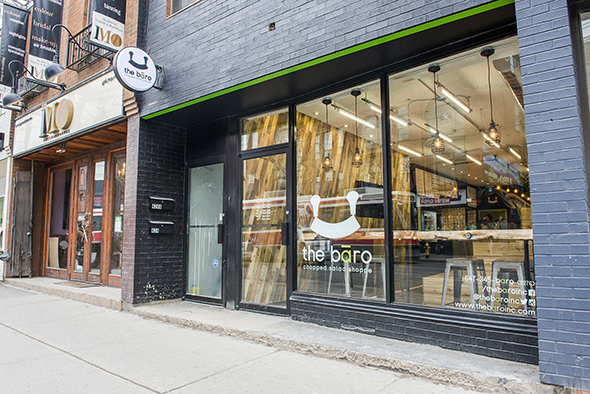