Tesla Cafe can be found in Koreatown , in a semi-detached house that was previously Rakia Bar and Hrvati before that. Yes, it's named after who you think it's named after; this place opened on July 10, 2015, which was Nikola Tesla Day .

Being of Serbian descent, first-time pub owner Oliver Obradovic is keeping the Balkan ownership theme going here (the previous two incarnations were run by Croatians and then a Serbian). His mother, a scientist (chemist, to be exact), made him a fan of Tesla - a Serbian national hero - and Obradovic has decided to celebrate his Slavic background with this spot. 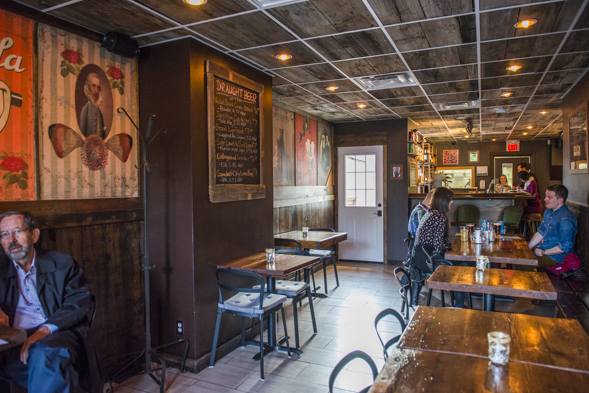 There are some grandfathered remnants of decor from the last two establishments but new additions have also been made, like a striking mural of a Tesla machine on a wall in the back and Tesla dolls, one sitting amongst a display of tall cans (some have mistaken it for Obradovic himself, Jeopardy 's Alex Trebek and even the lead from Welcome Back, Kotter ). 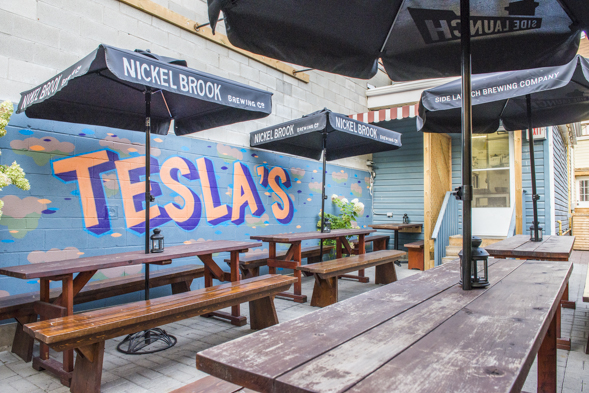 It's cozy inside, with seating for about 40, plus a nice back patio and a smaller front patio. Two couples run the place: there is of course Obradovic, with his girlfriend Sharma Queiser doing most of the front-of-house work; and then there's bar manager George Godfrey, and in the kitchen his girlfriend Aviva Black.

For now, this is actually more of a pub than cafe (it opens at 5pm, Tuesday through Saturday), although there are espresso-based drinks available using a special house blend of beans from Grain, Curd & Bean that are roasted by Rufino's Classic Gourmet. 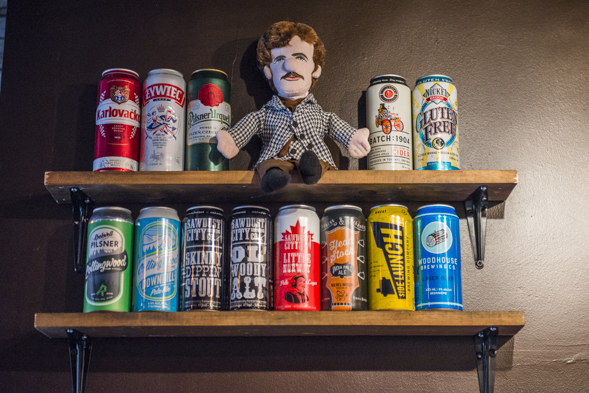 Those who frequented the past two incarnations will be happy to see that there are also imported tall cans of Karlovačko from Croatia and Zywiec from Poland ($6.50 each), while everyone should be glad about weekday 5pm-7pm happy hours with featured cheap pints ($4-$5, regularly $6-$8) and $5 Tallboy Tuesdays for local cans (regularly around $7). 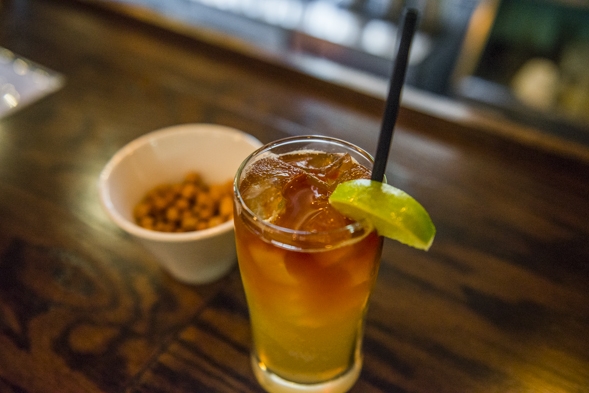 A short list of classic cocktails are on offer, and the team is developing and experimenting with the idea of Tesla-themed drinks like the AC (for alternating "currants") that will contain light and dark currants, and maybe even smoke, as future possibilities.

One of the most popular orders so far is the Dark & Stormy ($9), made with Gosling's Black Seal Rum, a strong and zingy ginger beer from Kensington Market's Thomas Lavers and lime. It's a pretty straightforward drink, but it's done well and made with high quality ingredients.

The same can be said of the pub's comfort food. It's approachable, hearty fare that pairs well with craft brews, and tasty to boot. 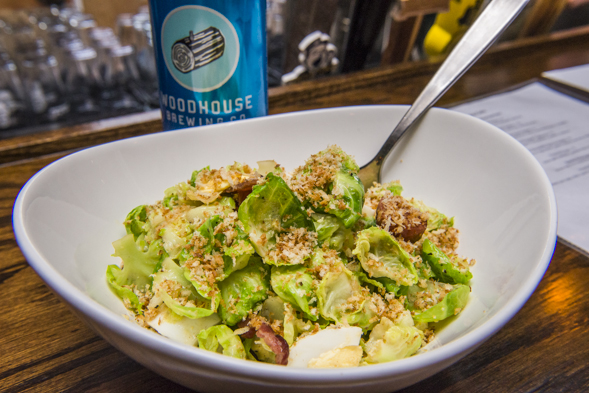 As a starter, the warm Brussels sprout salad ($9) is highly recommended. A chopped salad of Brussels sprout leaves with egg, bacon and panko crumbs in a red wine vinaigrette, this is a surprisingly pleasing dish with a lovely balance of flavours and textures; there are just the right hits of fat, acid, salt and crunch to make it very satisfying. 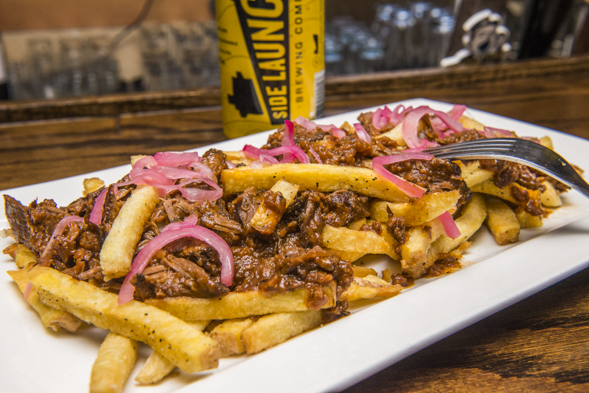 Another highlight is the short rib poutine ($11), which also happens to be gluten-free. A generous portion of fries are topped with braised beef short ribs, Ontario cheese curds, red wine gravy and pickled red onions, and it all tastes as amazing as it smells.

The flavour of red wine is prominent in the gravy, making it insanely delicious, while the pickled red onions add an addictive acidity and a touch of sweetness. This is a poutine variation done right. 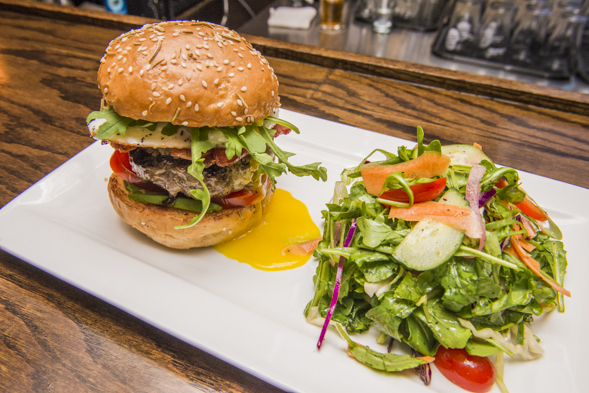 Riffing on a Cobb salad, the Cobb Burger ($14) consists of an Ontario ground chuck patty along with bacon, avocado, Quebec smoked blue cheese, tomato, arugula and dijon, not to mention a sunny egg, all on an Ace Bakery bun.

This huge, colourful burger also comes with a side of fries, but since we've already had poutine, we substitute with an arugula salad instead ($2 extra, or get both sides for $3). For me, what makes this burger is the runny yolk, creating a messy, sexy sauce. Vegetarians, not to worry, there's also a veggie burger ($10). 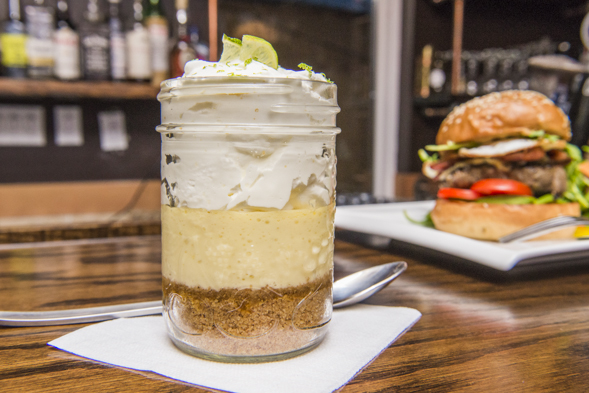 For dessert, the Key Lime Pie in a Jar ($6) comprises a graham cracker crust on the bottom, key lime custard in the middle and a top layer of thick, whipped cream. It's tricky to get a spoonful of all three layers, but when I do, it's a good combo of tartness and just the right amount of sweetness. 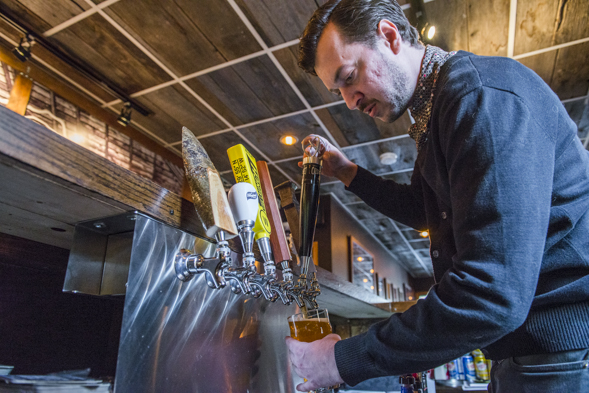 Trivia nights and acoustic live music nights are part of Obradovic's future plans for the pub, and for now he's trying to avoid installing flatscreens so as to encourage conversation amongst patrons instead.

I live pretty close by, and I'm looking forward to adding this spot into my regular rotation of local hangouts; it's a nice alternative to all the Korean joints, Clinton's , Tacos El Asador and Pour Boy . 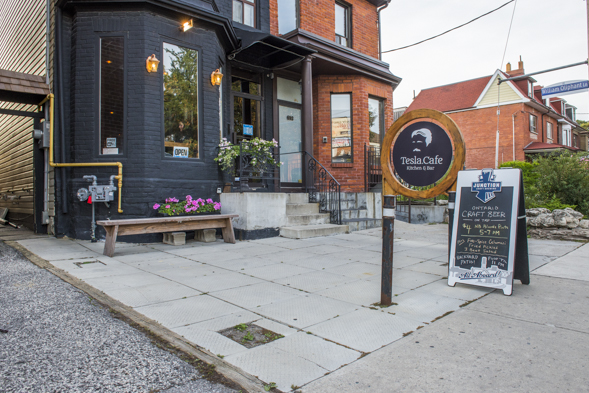