Tara Inn has remained a secret long enough. The humble Irish Pub in the South Eastern end of Scarborough has for years been plating bar food and traditional Irish breakfast with enough greasy aplomb to absorb even the most serious of St. Paddy's day hangovers. But the real reason to make the trek? The wings. Delicious, plump, juicy and flavourful wings .

From the outside, the signage at the restaurant seems recently updated; a thousand watt beacon gleaming from the recesses of a nondescript strip plaza. The neighbourhood is as homely as the establishment's traditional glass paned doors.

Walking through the threshold of Tara Inn however, one enters a world that is essentially the polar opposite of "gleaming". Green felt carpet, stained glass light fixtures, ubiquitous wood paneled walls, wicker furniture and a gaggle of jovial imbibers huddled around the bar transport you immediately back in time 10 years. In terms of ambiance, I've never been embraced in the anthropomorphic bosom of a snooker table but I'd imagine it's a somewhat similar experience.

It's a wonderful bit of a surprise that amongst the eclectic decor and local regulars at this dimly lit watering hole, one finds some incredibly impressive bar food.

The reason I am here though, and the reason many internet trolling foodies have made the trek out to Kingston Road over the years, are the jumbo chicken wings.

Offered in portions of 5, 10, 15 and 50, Tara's chicken wings are available in a variety of familiar flavours, including BBQ, honey garlic, cajun, honey mustard and jerk to name a few. We opt for 20 wings ($22) split between medium hickory BBQ and cajun. Because our eyes are bigger than our stomaches, we also order a serving of onion rings. 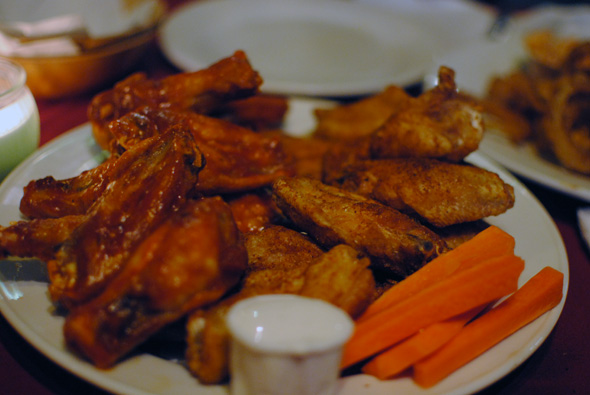 Service is friendly and relaxed and our wings arrive in no time flat (the place being empty probably helped). Upon a cursory glance, it's clear the phrase "jumbo" is no piece of false advertising. Each piece of poultry is freakishly, mutant-sized large.

Eschewing the heavily battered style of so many traditional buffalo wing joints, Tara's wings have just a thin dusting of seasoning, resulting in a delicate and thin skin that manages to retain a satisfying crispiness.

The medium hickory BBQ has no trace of vinegar or Tabasco aftertaste. Instead it features a mildly sweet first bite with an appropriately benign kick at the end, courtesy of some peppery BBQ heat.

The cajun style, traditionally a dry wing, are curious in that because the wings themselves are not battered, the meat tastes and appears almost like a baked wing dusted with seasoning.

To be honest, I'm not even 100 per cent sure the wings are fried. Although I did not get a chance to ask, it would not surprise me at all if they were baked -- they convincingly looked and tasted the part.

As for the seasoning, the flavour is cajun-y enough -- slightly garlicky with hints of paprika and cayenne kick -- but nothing exceptional. What makes this wing though, not to be redundant, is the chicken itself. The meat is moist and bursting with flavourful juices instead of the dried out shards so often seen with dry dusted, deep fried wings. 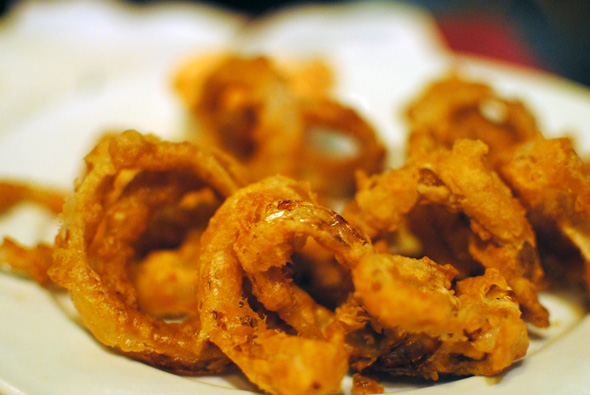 Not to be outshone however is our humble plate of onion rings. A surprisingly light beer batter covers each piece of hand cut onion. These things are homemade and the difference between each light, flavourful morsel and their bready, soggy frozen counterparts is the difference between an orange and a tetra pack of orange drink.

It might not look it, but the word is definitely getting out about Tara Inn. Although it's not in a particularly accessible (or glamorous) part of town, the comforting homemade menu items and world beating wings make this a pub well worth crawling to, even if it's a bit of a detour. 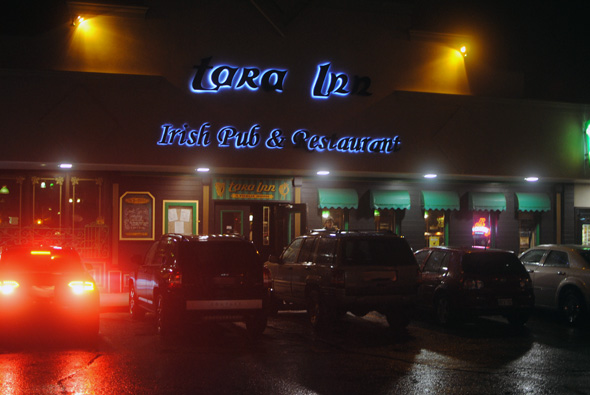 The Best Pubs in Scarborough