Sushi 101 recently opened it's doors on the madly sushi-dense Annex stretch of Bloor St West. How another sushi joint could possibly survive here is near incomprehensible, but Sushi 101 does enter the game with one advantage: they're the next door to Sushi on Bloor -- probably the most popular spot in the area and home to a constant line-up out the door.

Surely, 101 hopes to lure in hungry diners sick of the waiting game next door, but can this newcomer really stand up to some of the city's favourite sushi houses being mere steps away? Our own reviews of those spots have proven that people tend to be have some serious loyalties when it comes to their sushi places.

Well, for starters, their game plan involves an interior that mimics both Sushi on Bloor & New Gen . It's a mix of comfy booths and tables adjacent to the sushi bar. The menu offers a mix of just about everything from sushi/sashimi standards, to bento boxes and an array of Japanese side-dishes. So far, so familiar.

We order one Bento Box, a 101 specialty called "Fuji Mountain" (California rolls covered in oven-baked crab meat and covered in "home-made sauce") and some Kamisu rolls (rice-less rolls wrapped in cucumber). My partner does her usual inquiry as to whether we can "upgrade" the bento's cucumber/avocado rolls to the Kamisu rolls, and for $2, we're in business.

First up is hot tea, miso soup and an order of edamame beans ($3.25). All three are quite good though pretty much standard. 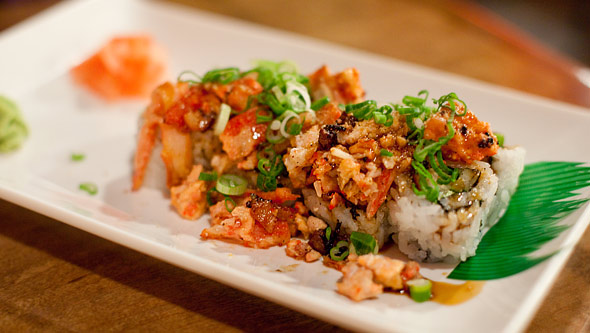 Next arrive the rolls.

Fuji Mountain ($7.95), pictured here, is made up of 8 small California rolls, buried in warm oven-baked crab meat, chopped green onions and some kind of "home-made sauce". The sauce actually just strikes me as a teriyaki type sauce, but it was hard to tell as there wasn't that much of it (despite a description that said it'd be "flowing" down the mountain!).

Aside from the mystery surrounding the sauce, this was an instant hit with both of us -- definitely something we'd order again and again. Everything was really fresh and flavourful. It's also a pick we haven't really seen on other menus in the area. The only weakness I'd note were loosely wrapped rolls that didn't hold together very well.

The Kamisu Rolls ($5.95) are fresh type rolls that feature cucumber wrapped around avocado, crab and fish eggs. Next door, a variation of these just named "Sushi Salad Rolls" are just about my favourite thing on the menu.

At first sight, I was impressed with how colourful and and large they were. The crab (though imitation) part of the equation was sizeable, but unfortunately, that was part of the problem too. They were a bit too large for the thick cucumber to hold together. There was no way to pick these up without them falling apart and turning into a tossed crab salad sans dressing. More cucumber, cut thinly and wrapped nice and tight, would make all the difference here.

Lastly, in comes Bento Box "A" (pictured at the top). For $7.95, you get chicken teriyaki, mixed veggie tempura, a pair of meat gyoza, salad and rice. Seemed like a pretty good deal on the menu, but upon seeing it, I've got to say that this is a great deal. 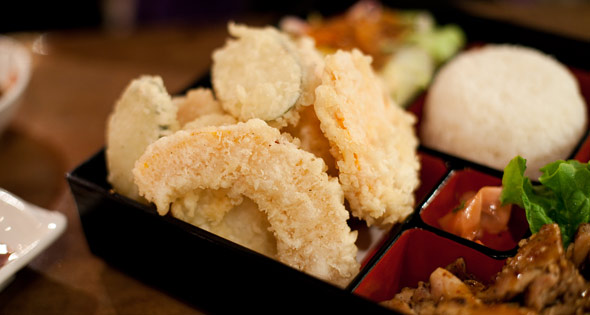 Portions border on huge for a bento box at this price. Lots of juicy chicken and a ridiculously big pile of tempura -- 2 big pieces of squash, sweet potato, zucchini, regular potato and even broccoli. But it wasn't all about quantity. Maybe I owe this to the restaurant being half empty, but this was some seriously fresh tempura. The veggie slices inside were so hot I had to drop my first piece, but didn't mind one bit. It gave me time to admire and pick away at the lightly-coloured batter that was super crispy without being too oily... just really, really nice.

The meat-filled gyoza and salad were fine sides though nothing exceptional.

Despite sharing, we could barely finish the meal in front of us. At the same time, I couldn't help but wonder if Sushi 101 was going to jump on the "free ice cream" bandwagon the competition are well-known for.

The answer? No. The only thing that came next was the bill, but that was pretty sweet if you ask me. Only $20 + tip for a meal that has us rolling over to Bathurst Station.

Overall, Sushi 101 certainly has room to improve before it can fill the shoes of its neighbours, but they're off to a decent start. Give it a try and skip the lines for a night. 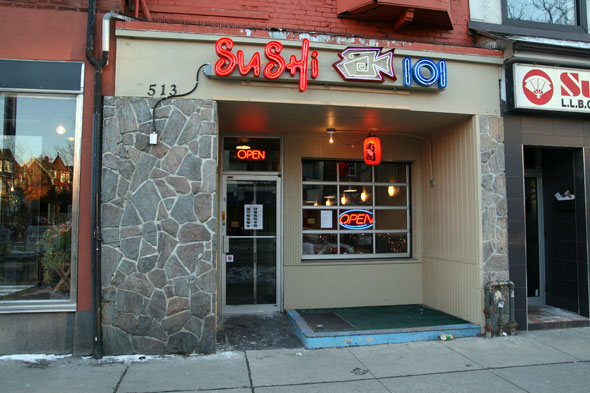