Spring Sushi aims for modern glamour and design, amped up by a serious devotion to technology. Located in the labyrinthine mall across from Dundas Square in the former Woo's Chinese Buffet spot, Spring Sushi is bringing new meaning to fusion; Thai, Korean and Japanese all co-mingle on gleaming iPad menus. With both AYCE and a la carte offerings, Spring Sushi is going with the 'something for everyone' philosophy--I'm just not sure it always translates. 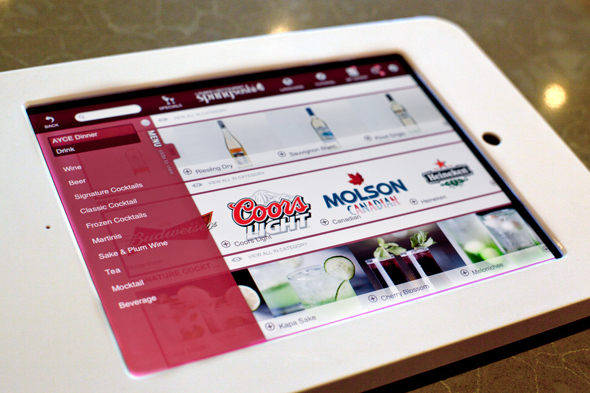 While the restaurant has a steady stream of diners, I'm left wondering if it's for the fish or for the novelty of ordering off an iPad. Already in use in Europe and Asia, iPad menus have been praised for their accuracy; you order, and the onus is on you to get it right.

While wait staff aren't entirely replaced, they are merely relegated to food running, and it would have been better to have more information available on the iPad. Vague descriptions of the food were rampant, and while most sushi is self-explanatory, some of their menu items (such as the sushi pizza) could have used a better write-up. 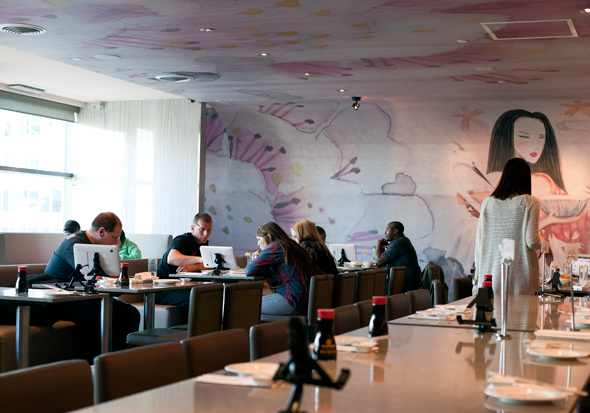 We opted for the AYCE menu and while the portions were almost all certainly for one or two people, the AYCE was literal, and food was ushered to us repeatedly with no second glances. At $25.99 for an adult AYCE option, the price was a bit steep, but you're not just paying for fish here; the location is prime and the iPads necessitate some expense. Drinks are not cheap either, but the list is replete with frozen cocktails, wine, Japanese and Canadian beers as well as sake.

Ordering was easy enough--mash some buttons, press confirm, and food swiftly arrives. We started with a mango salad, which oddly came as thinly-sliced and limp mangos with a few scattered spinach leaves and red and green peppers; noticeably absent was any dressing or seasoning of any kind. Definitely a miss, but Thai food isn't supposed to be their forte. The pineapple fried rice was overcooked and mushy, and the canned diced pineapple were few and far between. 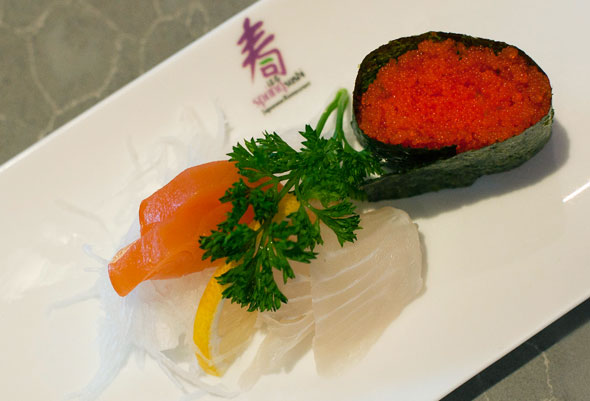 While they don't offer tuna sashimi of any kind, the salmon sashimi was buttery and rich and the preferred temperature (not the half-frozen kind that is commonplace). Also sampled were the snapper sashimi, surf clam sashimi (Hokkigai) and crab meat (Kani) sushi, which were all respectable, considering it was AYCE. 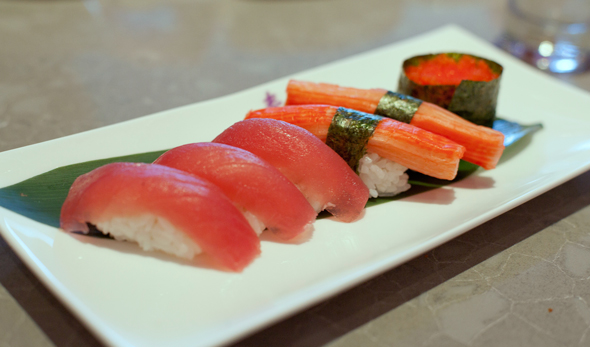 The spicy salmon rolls featured diced salmon, where I much prefer a solid hunk of fish with a smear of spicy sauce, and maybe the odd avocado; this is too reminiscent of a salmon salad sandwich gone awry. The salmon sushi was rather flat, beaten into submission, but flavour-wise just as good as the sashimi. The BBQ eel sushi was well-seasoned and hit the mark. 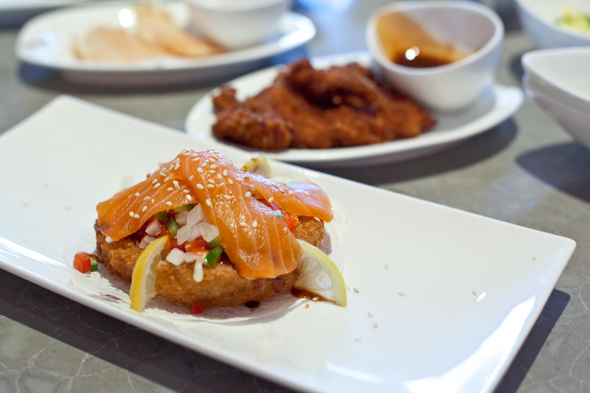 The salmon sushi pizza was disappointing. Served with chopped red and green peppers and chunks of white onion, the flavour of the fish is lost in the dish. Fune's stellar sushi pizza is my absolute favourite, and I have yet to try one that comes close. Spring Sushi's is mediocre at best. The deep fried dumplings (Gyoza) filled with vegetables came out a little cold and crunchy, but the shrimp tempura were fluffy, crispy and utterly inhalable. 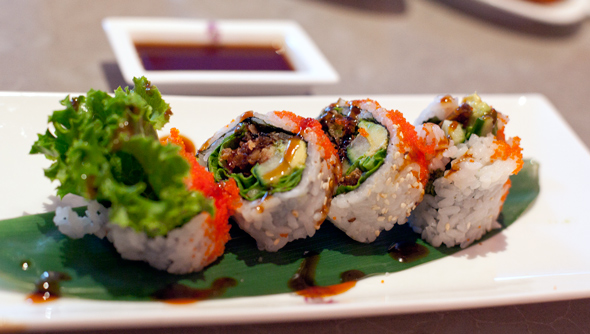 The soft shell crab roll jams tempura style crab meat with avocado, cucumber, lettuce, and flying fish roe into one overstuffed maki. While certainly on the messy side, it's worth the extra napkins. 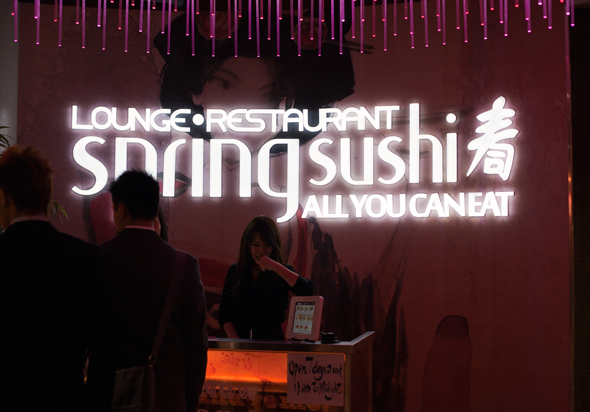 AYCE is hard to execute with a distinguished level of culinary prowess, so go in with slightly lowered expectations for the service and quality of the food. While Spring Sushi sometimes excels, you should approach it with a nod towards its novelty. I think it's a great way to explore different types of fish, and certainly the iPad is a clever way to get people in the door--just remember, you get what you pay for.

Spring Sushi takes reservations of all sizes, and also has another location in Hamilton.