Just when I thought I'd never meet a roti I didn't like I found one. The prize belongs to the Roti Lady, an unassuming spot on Dunn Avenue south of Queen Street. It's just around the corner from Bacchus and within a short bike ride of popular roti destinations like Mother India , Island Foods and Ali's West Indian Roti Shop .

My visit starts with a scan of their bright yellow menu, painted on the exterior wall fronting Dunn. There are beef patties for $1, curry goat and beef rotis for $6.99, fried chicken with fries for $3.50, and the meal I decide to order today - a vegetable roti filled with spinach, squash, potato and chickpeas for $5.50.

Inside I perch in front of the fourteen inch TV set next to the front window. I watch the highlights from last night's Jays game as I wait for the customer currently at the cash to pay for a couple of beef patties. I get the sense that this isn't the type of place they actually want you to eat in. While a few stools and a lawn chair are scattered about, the overwhelming feeling I get is that this is just one big storage room.

There are boxes everywhere, a sack of potatoes, bottles of juice and charming little pictures of the Caribbean. It's not necessarily dirty, but it's incredibly cluttered. Outside, a red picnic table is serviceable enough as a dine-in option when weather permits. 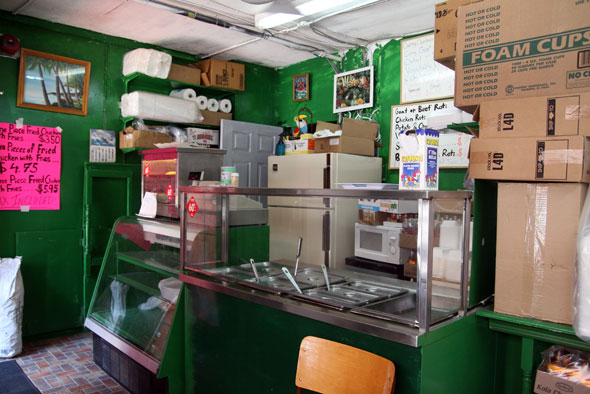 The first sign of trouble starts when I hear the familiar sound of the microwave beeping. Not just once. But on four separate occasions. Once for each ingredient? The kitchen is mostly enclosed but a small window allows me to peer in to see what is going on. I can't see what's going in and out of the microwave but the older man preparing my roti seems to be making the shell from scratch. I'm starting to think this roti might have promise.

Ten minutes later and still no word from the kitchen. The microwave is still getting lots of love but no real progress seems to be happening until a mother (the roti lady herself?) and daughter walk in with the days groceries. At this point, I'm asked if I want my roti regular or hot . I decide that somewhere in between would probably do the trick. Let's make it a medium.

When my roti finally arrives I take it to-go and later cut it open with a knife to check out what awaits me inside. The texture is neither firm not runny. Somewhere in between that I can best describe as gooey. The temperature is uneven throughout - with pockets of heat followed by lukewarm surprises - perhaps confirming my suspicions about the role a microwave played in its creation.

The squash, or something near the squash, is sickeningly tangy. The spinach is dark if not black. Not the usual dark green that I was expecting. For a minute I actually thought it might be eggplant. The potatoes are as they should be but they, plus the chickpeas, are overpowered by the other flavours that abound.

While I do manage to down the whole thing, I find my doing so a bit grudgingly and worry if I'm going to become re-acquainted with the tangy stuff later in the day. Thankfully, we didn't meet again. And because I won't be returning to Roti Lady hopefully never will. 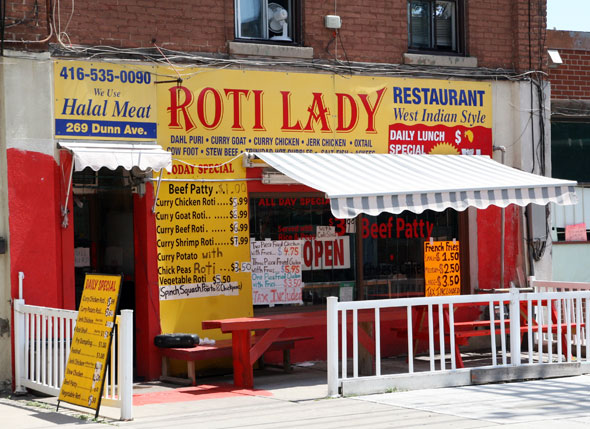