Reggie's on King is just the place for folks who like quality bread, local ingredients, inventive flavours and long lines. Sandwich haters and line-veto-ers need not apply.

In all fairness, I've only heard rumours about Reggie's super-long lines. The day my friend and I visited, the queue was, in his words "not too bad" for lunchtime. Unfortunately, a "not too bad" line at Reggie's still warrants a 5-minute wait to order, plus another 10 minutes for preparation. For sandwiches.

It's a good thing those sandwiches are mighty tasty.

We both opted for poultry, choosing a Duck Confit and Smoked Turkey sandwich respectively. The Duck Confit was fashioned with generous slabs of brie cheese, wilted grape tomatoes, Dijon mayonnaise, and the eponymous fowl all on thick, chewy baguette. Tart slices of Granny Smith apple were not julienned as advertised, but nevertheless added zingy panache to the sweet, cream, and spice combo of duck, brie and Dijon.

Although the Duck Confit is certainly one of the most interesting sandwiches since Hillel the Elder's 1st Century B.C.E. version (apple, nuts, wine and bitter herbs on matzoh), the Smoked Turkey was the favourite at our table. Thick slices of soft fresh-baked bread with chewy crust were oozing creamy mayonnaise and tart cranberry chutney, and singing a flavour symphony that more than compensated for a toothsome but slightly dry turkey. 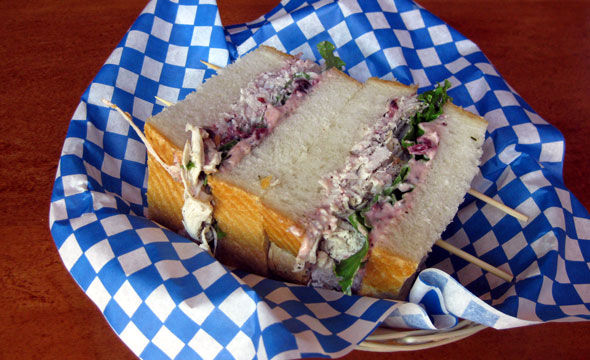 Reggie's employs creativity and quality ingredients, but quite literally at a cost. I generally like to keep my lunch spending low, but at 7-9$ per sandwich--sans sides--I'll be saving Reggie's for payday. They do offer a daily special: $10 for a sandwich, fries and fountain pop, but you know, it's $10 + tax. For a sandwich.

Still, you get what you pay for, and in this heyday of mass-produced sandwiches, Reggie's is laudable for its efforts to use locally sourced, preservative-free ingredients. Meats are roasted in-house and smoked locally at Joy Bistro , and all breads come from local artisan bakeries. Owner Bryan Burke has been quoted as saying that he avoids using preservatives, as "they bring people down".

It's a shame he hasn't applied this principle to Reggie's beverage selection, which is dominated by fountain pops, sugared-vitamin waters and commercial juices. Still, in the long history of sandwiches , from Hillel's matzoh creations, to the Earl of Sandwich's first bread-and beef version, to the school lunches of the 20th century, Reggie's is making a respectable mark with its tasty innovations. 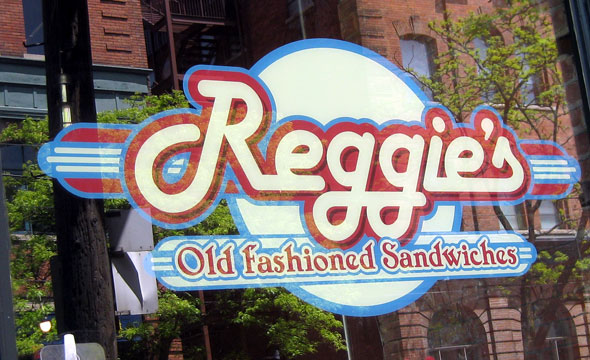