Rebozos (College St.) opened its doors just a few short weeks ago, although I first met owner Indalecio Marroquin during his short-lived tenancy at 214 Augusta . The petite Kensington Market stall offered a glimpse into the larger menu available at the original Rogers Road outpost of his restaurant. 214 Augusta represented a foot in the door into the city proper, and although he'd had his eye on Little Italy for his second sit-down restaurant for the past two years, the rent was astronomical. Instead, he took over a former Ethiopian restaurant just east of Bathurst and, with the help of his family, systematically renovated it, one bit at a time. 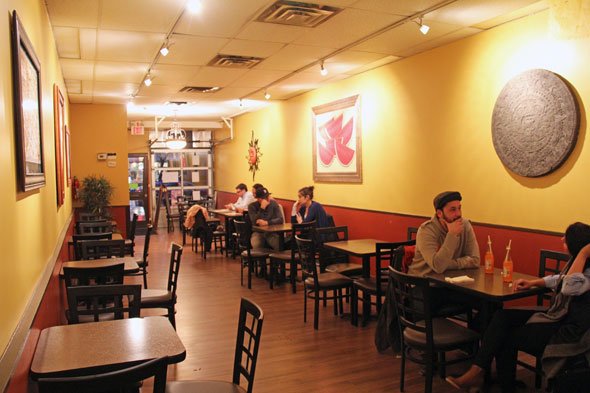 The result is a colorful room with yellow walls, orange accents, and an array of Mexican art. A painting of watermelon wedges by his wife gets the center spot on one wall, and her work is also evident in a miniature offering displayed proudly on the bar in celebration of Dia de los Muertos. "I never know what she's going to make next, Marroquin says, smiling. 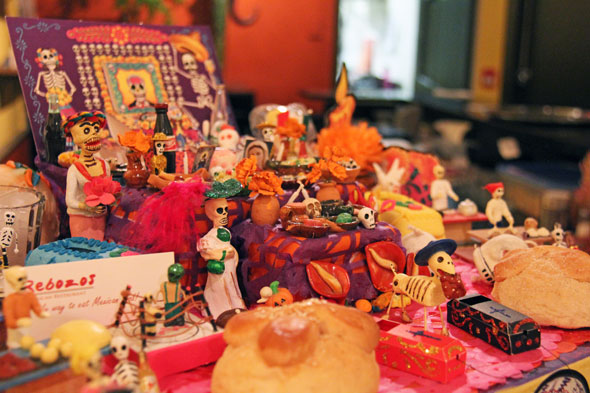 His printed menu is concise, meat-heavy, and features recipes direct from his native Mexico. However, a whiteboard holds sample menu items, including burritos ($8.50) and ceviche ($10). Some of those will find their way onto the permanent menu's next incarnation, while others will remain on rotation. Marroquin is clearly passionate about food, and wants to leave room for both specials and his own whims in the kitchen. 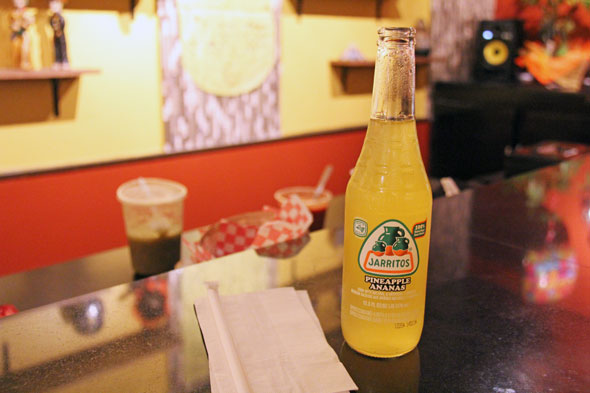 The restaurant recently received its liquor license, but drinks won't be rolled out 'til mid-November, when he's hoping to serve beer and margaritas. For now, there are non-alcoholic Mexican pops ($2.50) in flavours such as sangria and pineapple. I have the latter, and it's true to the fruit, refreshing, and not too cloyingly sweet. 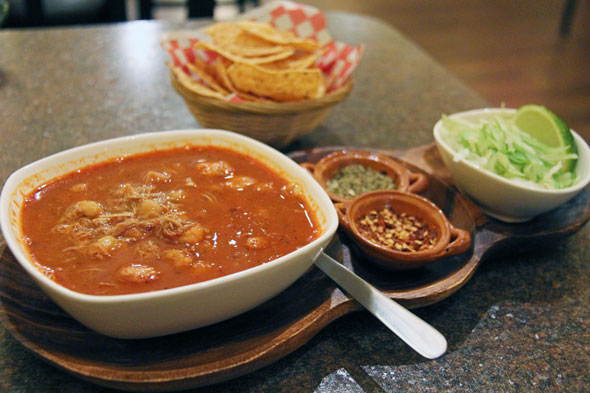 First up is the pozole ($7), which is presented on a wooden platter, alongside three other small bowls which hold a lime wedge and lettuce, and self-serve Mexican oregano and dried peppers. The pozole itself is more of a stew than a soup, with hearty hominy grains and spices, and tender, simmered pork. While polite dining dictates the use of a spoon, I'd advocate for dipping the provided corn chips into it like a salsa. The mix of textures is wonderful, and you can get away with scooping out the majority of the good stuff without too much mess. 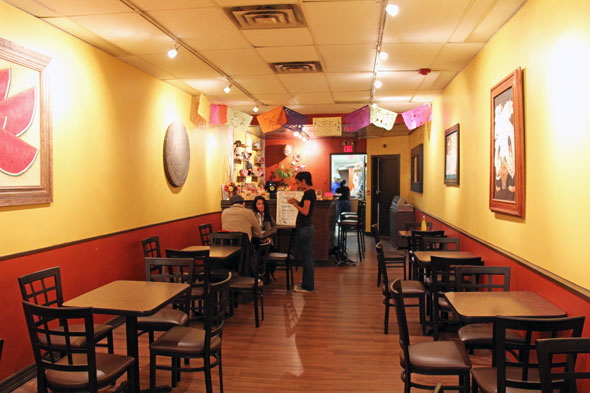 Next up is the ceviche ($10), made with tilapia and shreds of radishes, carrots, tomatoes, green onions and cilantro--again, it's served with Rebozos' well-salted tortilla chips. It's not our favourite dish at the meal's start (for me, because I was expecting a greater abundance and variety of seafood), but as the flavours have time to mingle and meld, the dish improves, and squeezing several lime wedges over it certainly helps. 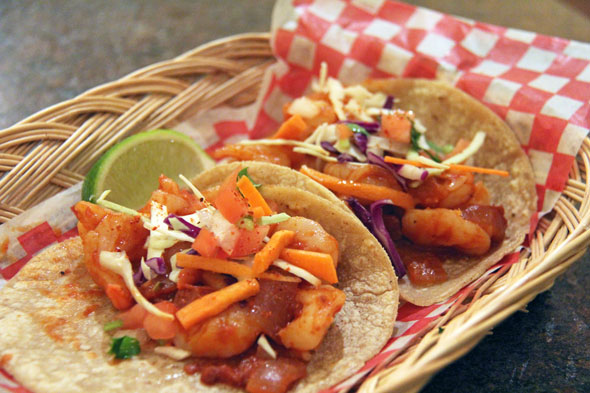 I can't resist the shrimp tacos, and am rewarded with a rich blend of grilled shrimp, tomatoes, chipotle and onions, topped with cabbage and shreds of carrots. At 2 for $8.50, they're on the pricy side, but the mild spice of the chipotle lends a rich, smoky flavor to the dish. A word about the tortillas--as they cool, they lose a bit of their flavor and take on a slightly chalky aftertaste, so eat quickly. 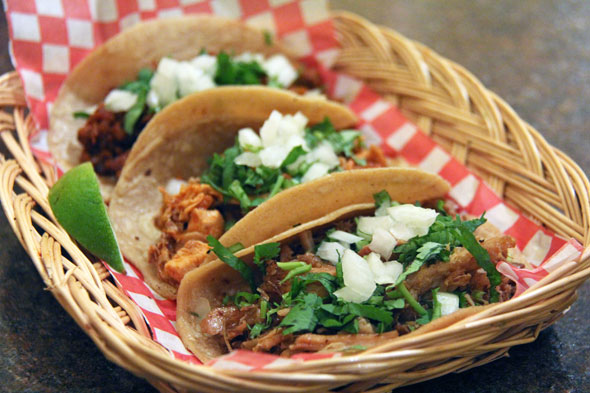 To finish, we opt for the trio of tacos ($10) and it comprises a large part of Rebozos' existing menu for a reason. Unlike other trendy (and frankly restrictive) taco spots, Rebozos lets you mix and match any combination from options such as carnitas, braised beef tongue, and cochinita pibil (slow-roasted pork marinated in annatto sauce). We choose carnitas, pollo et tinga, and chorizo.

Groups of two or more, rejoice: my boyfriend loved the carnitas (slow-cooked, shredded pork shoulder with fragrant onions and cilantro) and the chorizo (ground, perfectly seasoned sausage), while I broke from form and gushed over the pollo et tinga (chicken breast, onions and that same chipotle). In short, something for all tastes, within one handy plastic basket. 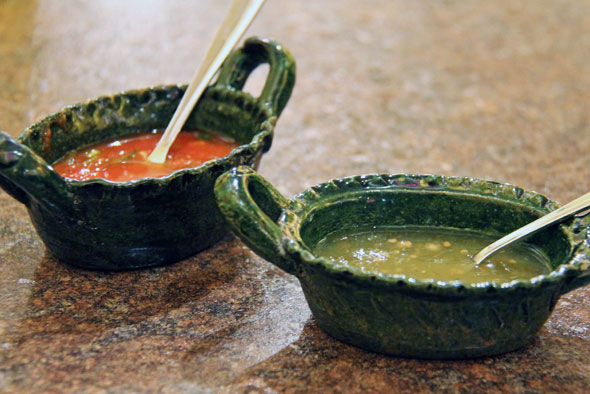 The tacos are served with two housemade salsas (a spicy red salsa and a salsa verde) which you can spoon out at will, but the taco fillings are amply spiced, and to be frank, I didn't like either salsa for their sweet aftertaste. The red salsa is highly innocuous-looking (although I was warned), but half a teaspoon thoroughly sears my mouth. 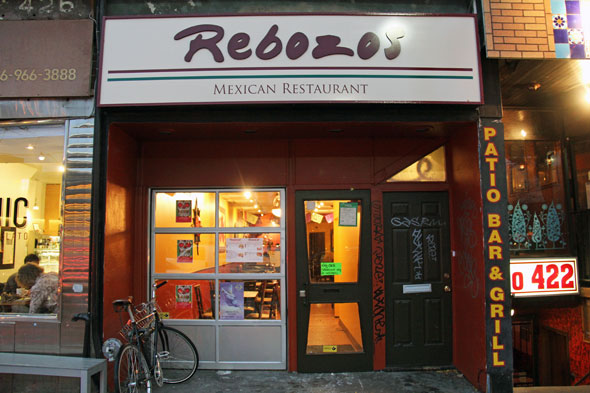 Marroquin is set for a much-needed and well-deserved vacation in the coming weeks, which will mean that the restaurant will only be open on Thursdays, Fridays and Saturdays until he returns (with Mexican beers in tow) on the 15th.