Rawlicious is a live food entry onto the rejuvenated Junction scene. The menu describes the Junction neighbourhood as "reinvigorated" and no establishment is doing quite as much as this to bring literal life and energy to the area.

I've been noticing more and more lately how much eating seems to directly turn to sleep. I'm vegan, but I eat a lot of carbs, and I've been finding I have a tendency to nap after most of my meals (I hear that's how you get fat, I'm still waiting on that train).

While I can eat fruit and get a burst of energy rather than a tucker-me-out, fruit on an empty stomach just seems like too much water to me and on a full stomach, well, that's naptime, like I said.

Raw foods and raw foodists promise vitality, and I was pleased to find that following my meal at Rawlicious, I was not only energized and nourished but also felt satisfied, if not quite as all-you-can-eat full as I'm used to.

The portions do come smaller than many places, but the unique food and supremely comfortable environment left me thoroughly delighted, glutton though I may be.

Pictured at top is the Taco Wrap, containing nut "meat", nut "cheese", salsa, guacamole, tomatoes, onion and lettuce wrapped in collard greens. A simple yet clever way to eliminate the typical starchy tortilla wrap, although the "cheese" didn't taste much like cheese and more so just added moisture. The guacamole, salsa and "meat" were all very well prepared and flavourful, and although my default urge is to shovel food into my mouth, I made a point of holding back to enjoy it in little bites. 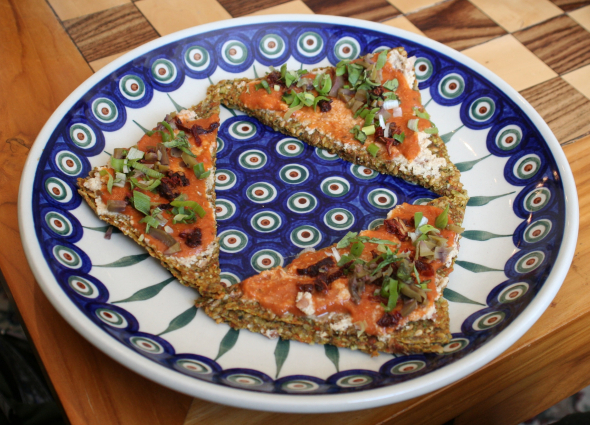 Like cold pizza? This may be the only place to encounter a pizza that seems like an appetizer, but it's hard to call this a pizza in anything but spirit anyway. I thought my typical pizza orders were un-pizza enough, skipping cheese and adding esoteric vegetables, but this was way beyond that. Topped with what fresh vegetables are on hand, the crust is made of pressed seeds and the "cheese" consists of miso, ginger and garlic transformed via some food processor trick. 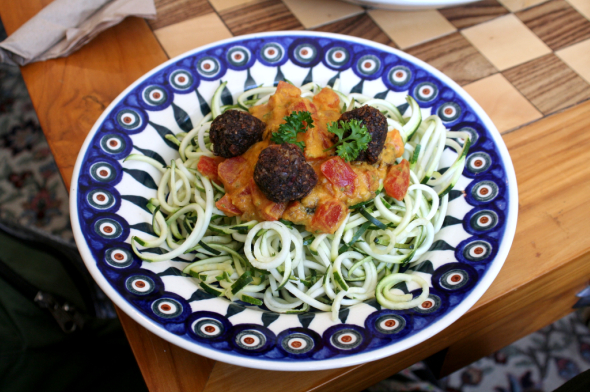 The "zucchetti" pasta qualified most as the main course, and also somehow managed to be the most authentically deceptive in terms of its flavour. I tried it with the olive & coconut curry sauce, plus "neat" balls, in order to diverge a bit from what pasta would usually be. Despite that - and I still don't know if this was a psychological trick - it really did taste like pasta. Not only like pasta, but pasta with cheese. Both the zucchini spirals themselves and the sauce somehow tasted surprisingly cheesy.

The zucchini spirals may have impressed me the most in terms of culinary technique, because while anyone can toss a ton of stuff into a blender, pour it out and call it cheese, these were cut with real talent. Some of the zucchini strands were over a foot long, longer than spaghetti comes and totally delivering on the fork-twirling side of things. The dish could have done with a larger serving of sauce, though. The neat balls seemed to be very similar to the nut meat in the taco wrap, and may have been the same thing. 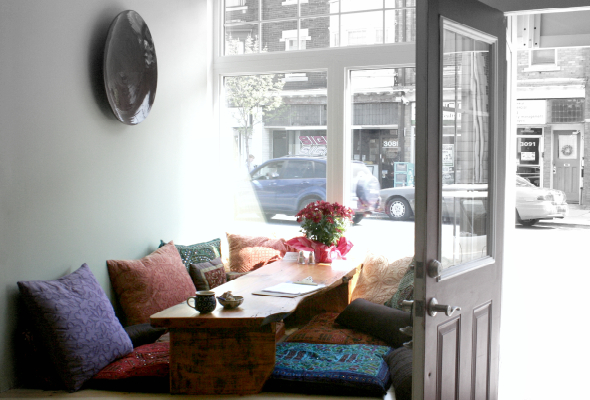 The atmosphere in the place is at-home comfortable, although the seating is limited to maybe a dozen customers total at a time. Only one table is served by conventional hard wood chairs, while the chess board table (complete with pieces) is surrounded by large padded sitting chairs and the window booth is filled with cushions to form a pillow nest.

If you're really starved for a cooking after your meal, you can also try out the infrared sauna service offered along with a number of other alternative health practices such as energy healing and magnetic resonance stimulation. They even host workshops from time to time on subjects such as juice f(e)asting.

Rawlicious is one of the most alive places in the city, and while I could not possibly personally eat there every day, it is definitely an ideal to strive towards.