Pur & Simple is a brunch lover's dream with everything from Bennys, skillets, crepes, waffles and smoothies on the menu.

This spot joins about 20 other locations of the rapidly-growing Canadian breakfast and lunch chain born out of Laval, Quebec in 2016. Think of it as a revamped Cora, another brunch franchise that happened to get its start not far from Laval in Montreal over 30 years ago. 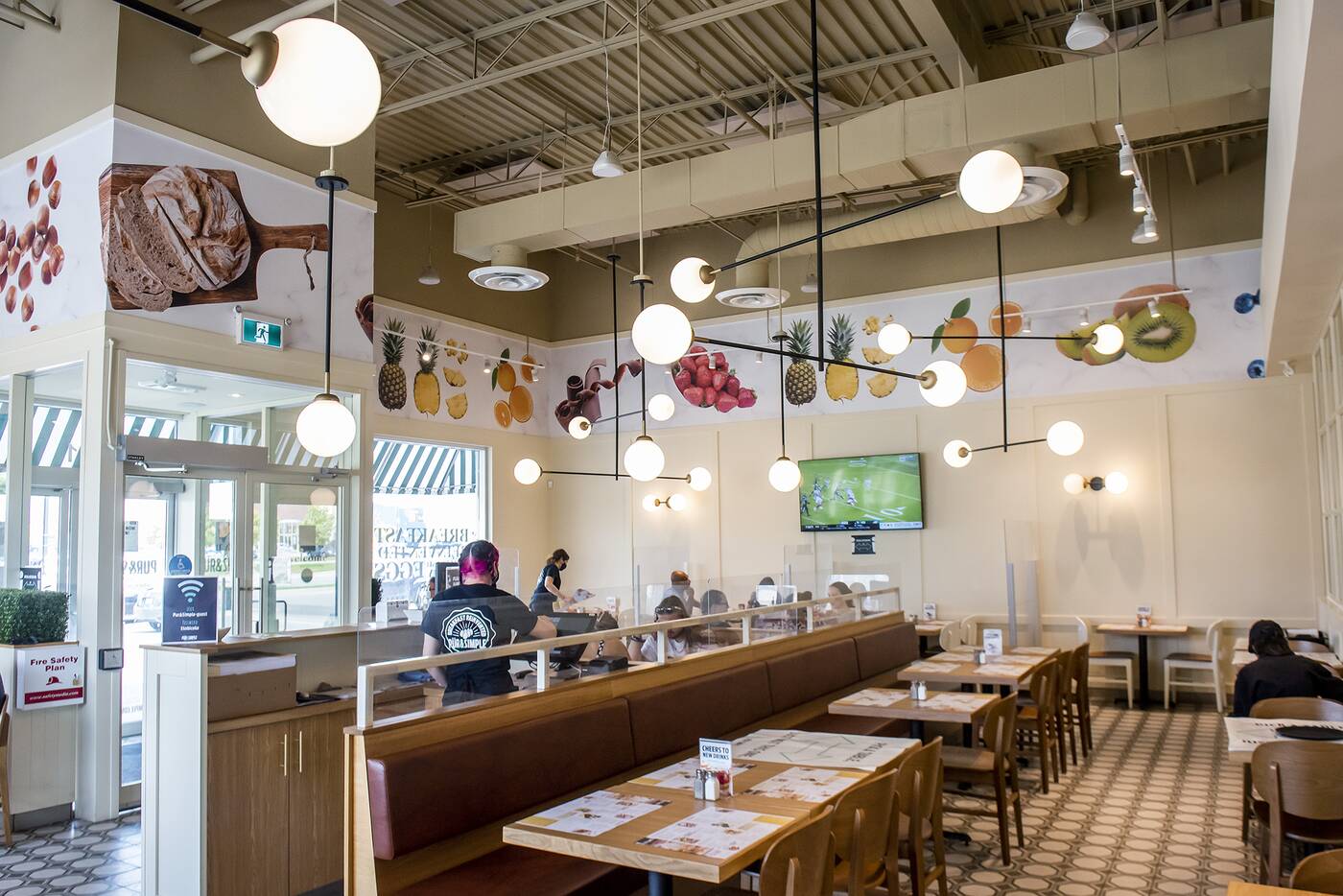 Nestled in an Etobicoke shopping centre, the morning eatery looks identical to the other few dozen spots with the same name. Expect a nearly-hundred-seat dining room, towering ceiling, and that buzz and bustle typical of a breakfast resto. 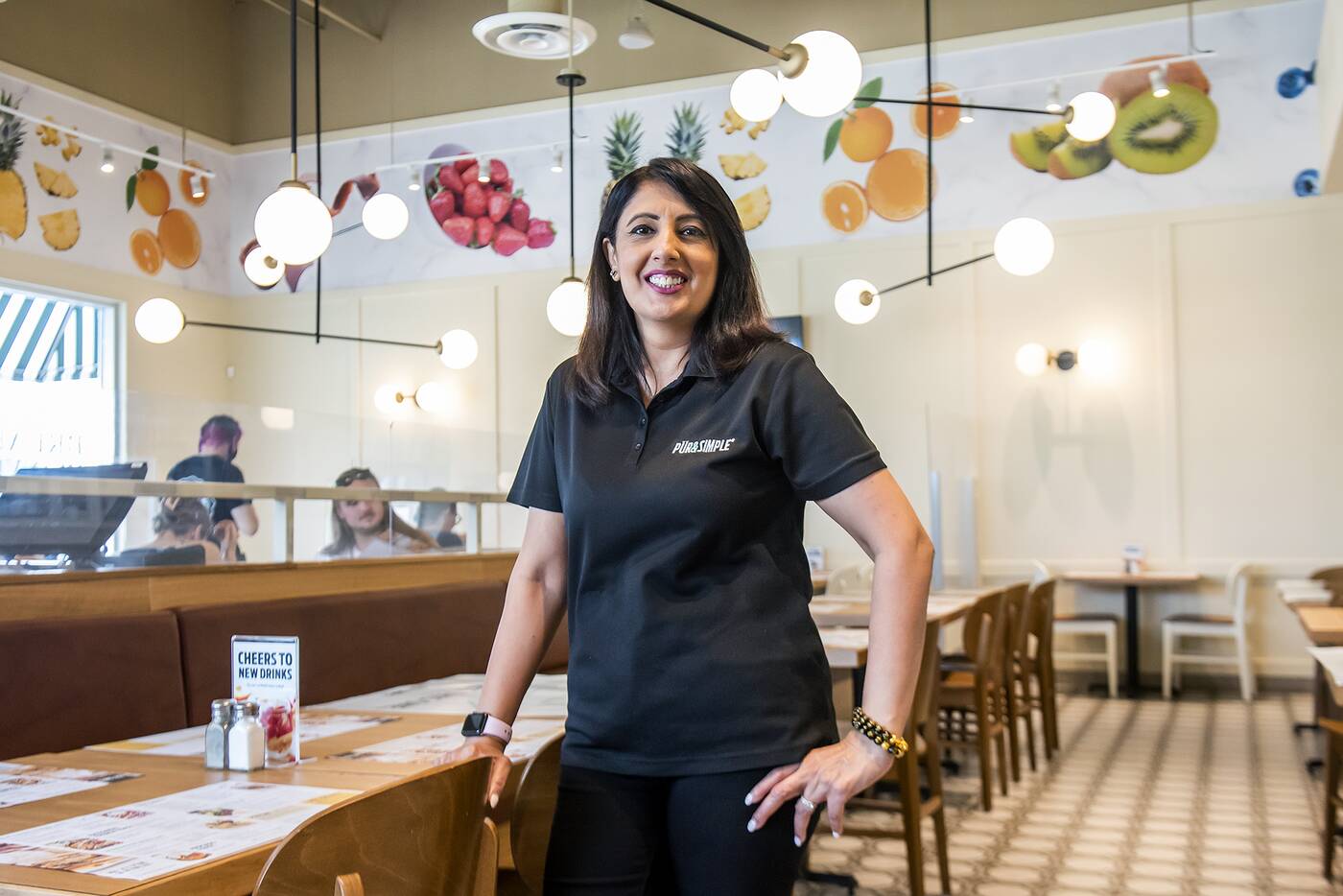 Saki Sihota signed on to open here, as well as nine more locations coming in the next few years. Although the first-time franchisee has been in interior design since moving to Canada about 10 years ago, she owned Indian restaurants back home in the UK. 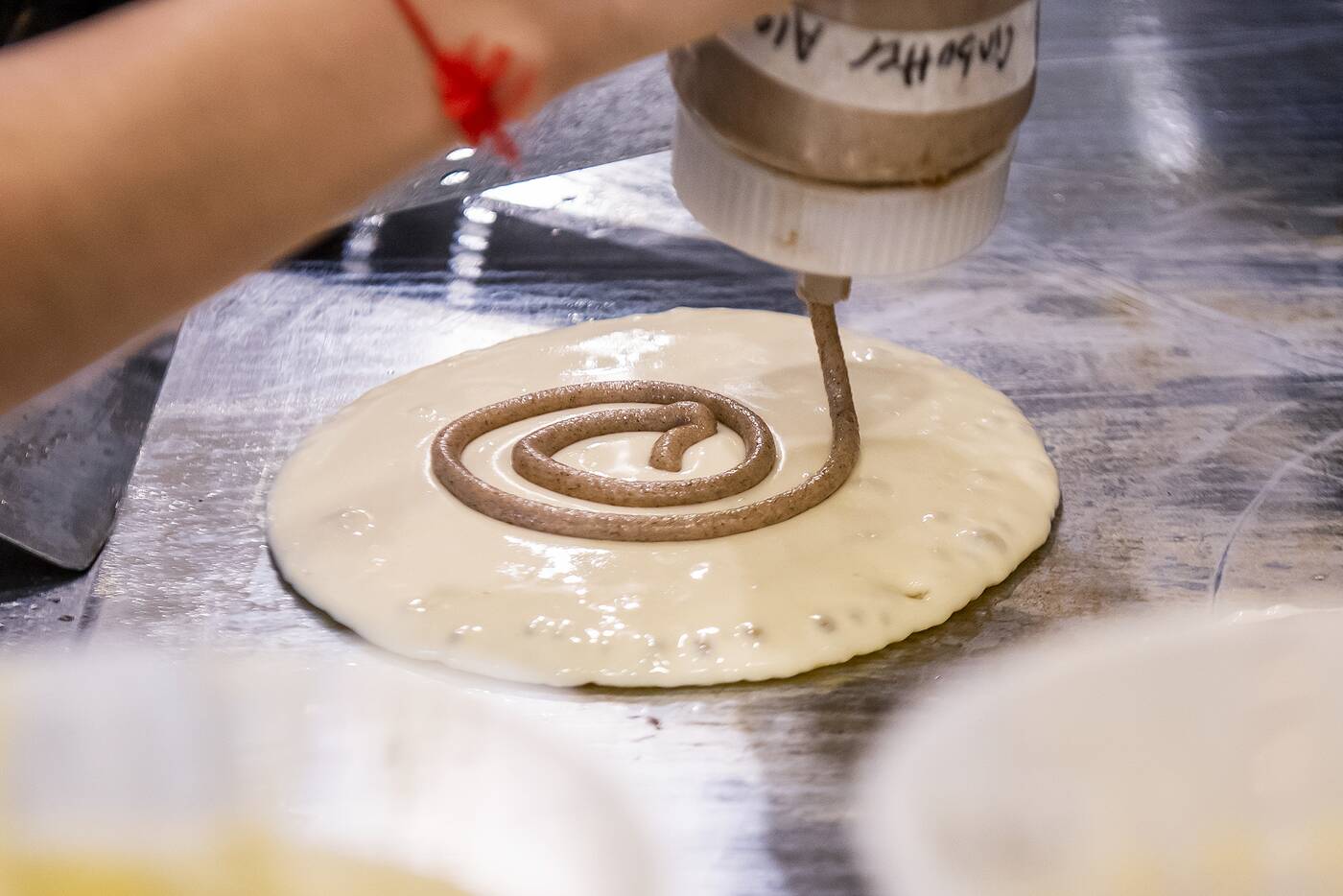 The reinvented diner staples on the menu are made from scratch with fresh and local ingredients. This goes for the homemade waffles, French toast and buttermilk pancakes, which come wonderfully decadent with the likes of Reese's peanut butter cups or cinnamon swirls. 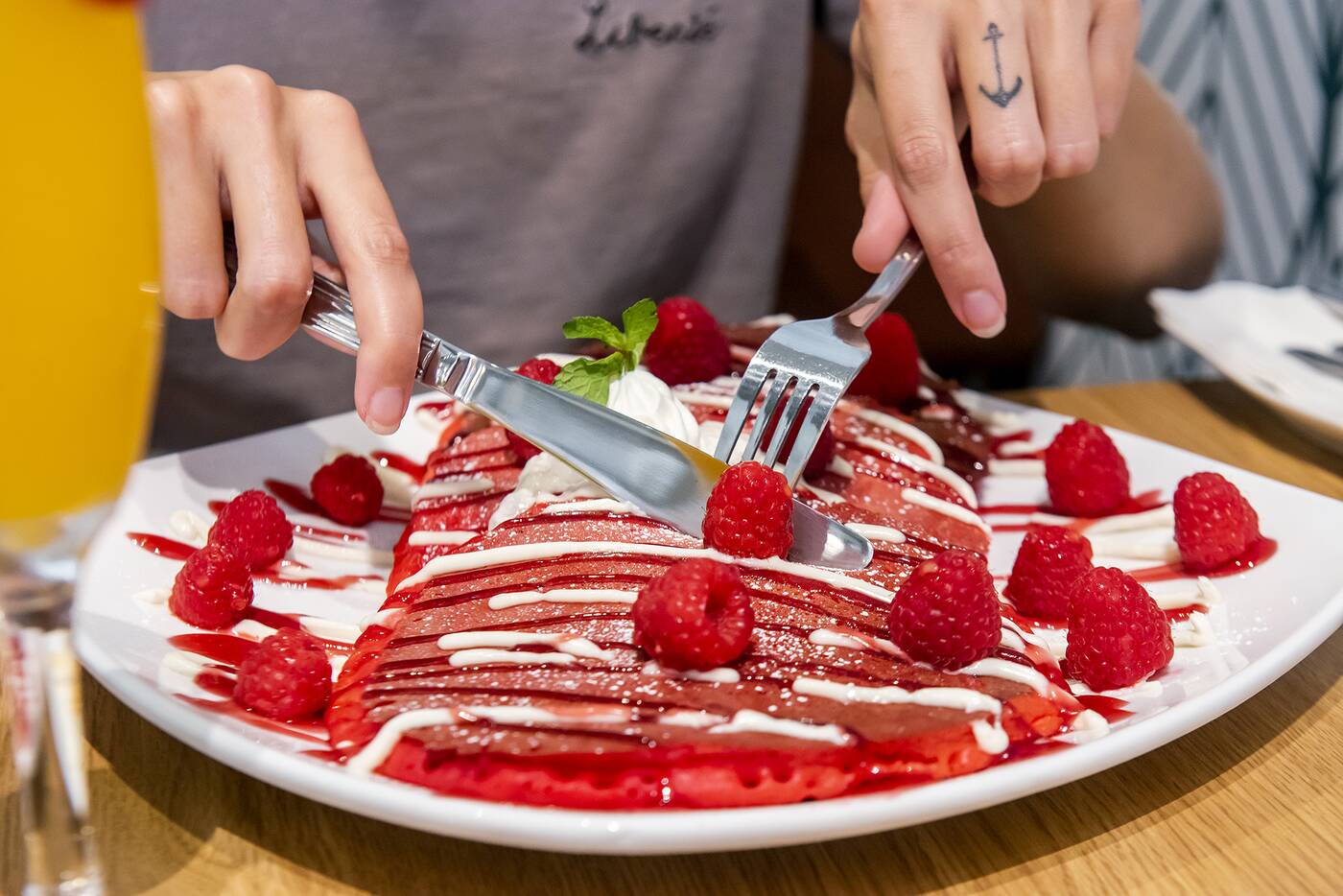 The red velvet pancakes ($16.95), which are a first for me, have to be among the most crave-worthy topped with raspberries, sweet cream cheese, raspberry coulis, whipped cream and fresh mint. 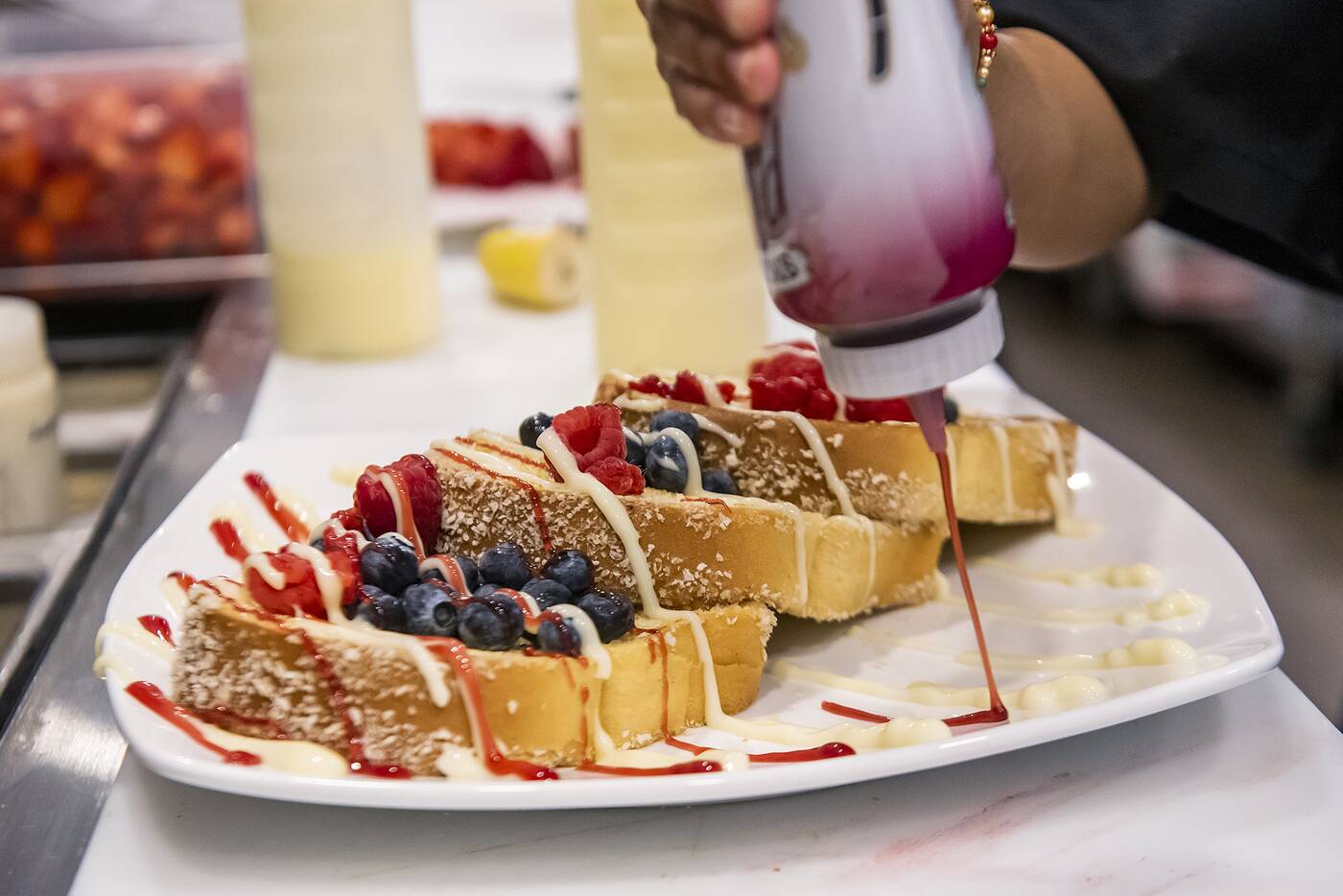 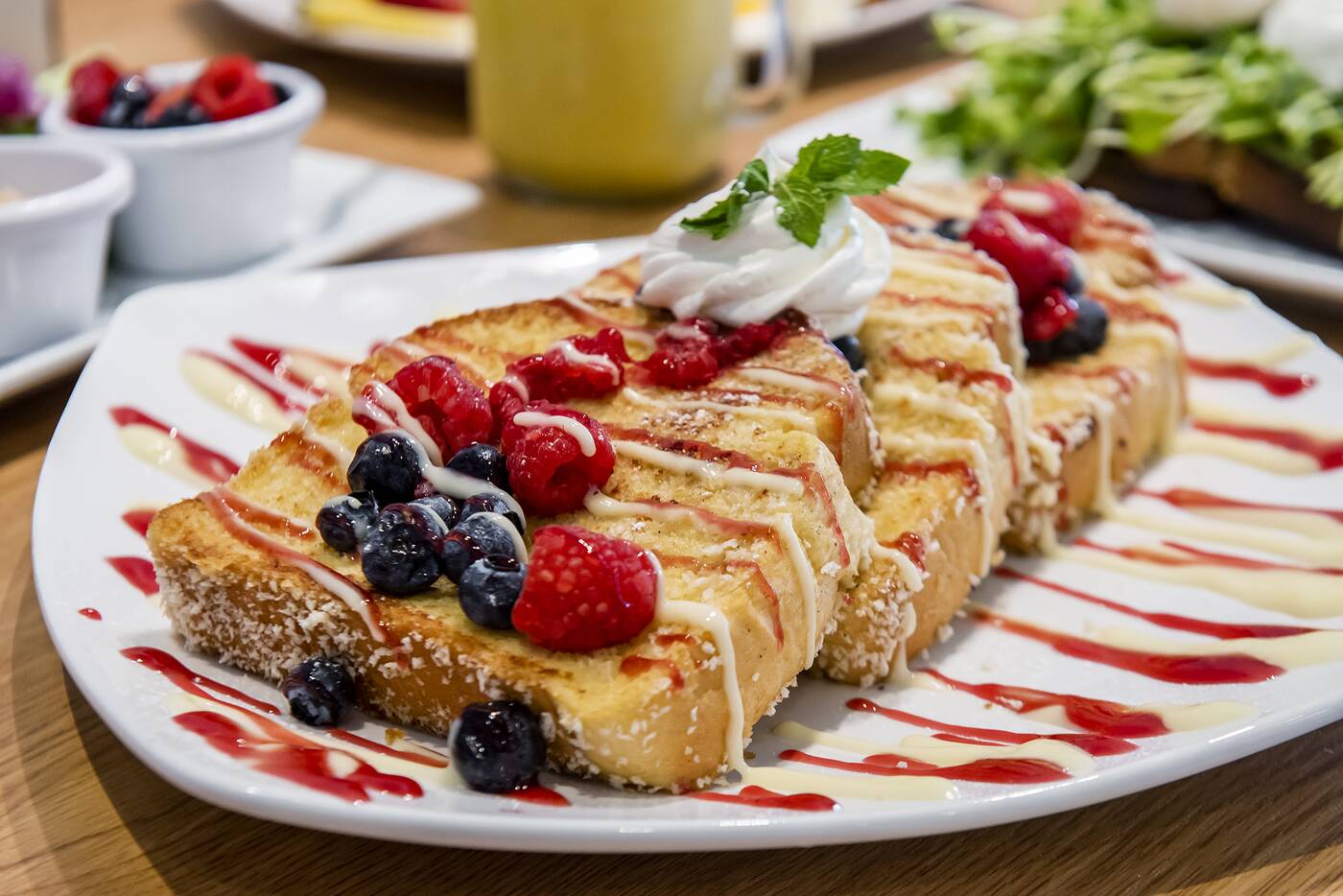 Three fluffy pieces of panko-breaded French toast are topped similarly to the pancakes, only with no cream cheese and the addition of blueberries and English cream. 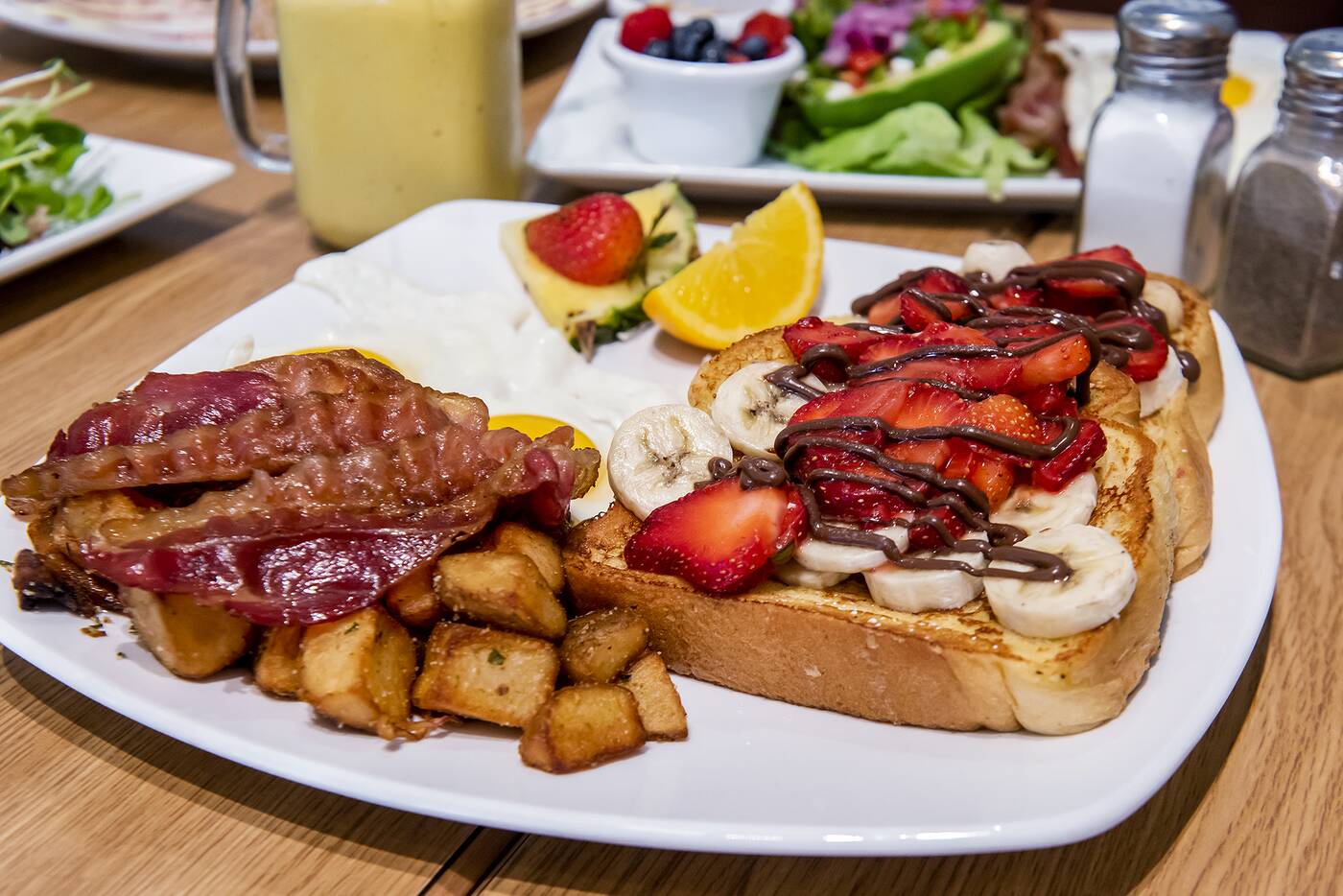 Best of both sweet and savoury worlds is the xplosion ($16.95) with two eggs of any style, bacon and French toast underneath strawberries, bananas and hazelnut chocolate. 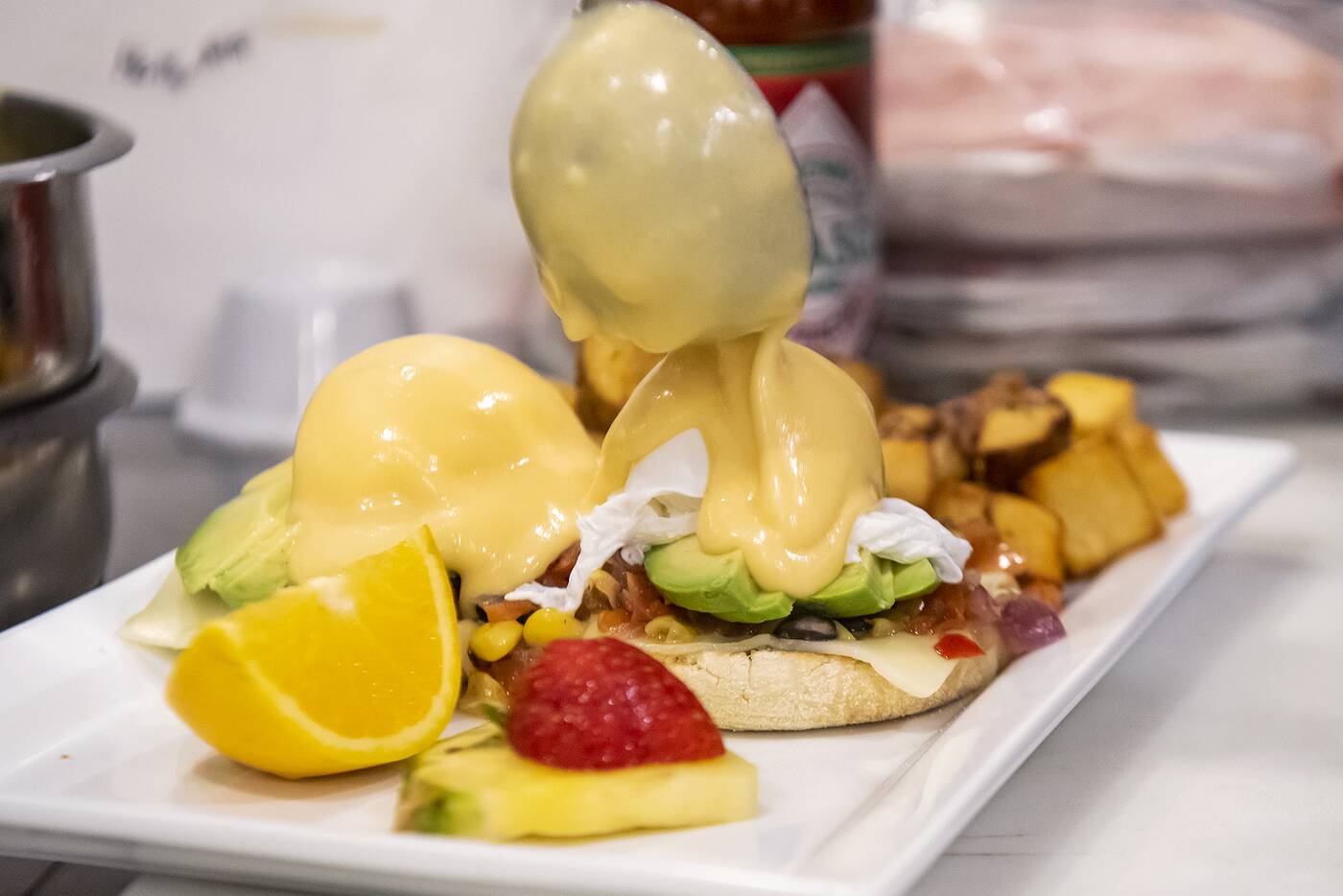 There are also nearly 10 egg Benedicts on offer, each able to be made with your choice between regular and spicy from-scratch hollandaise. 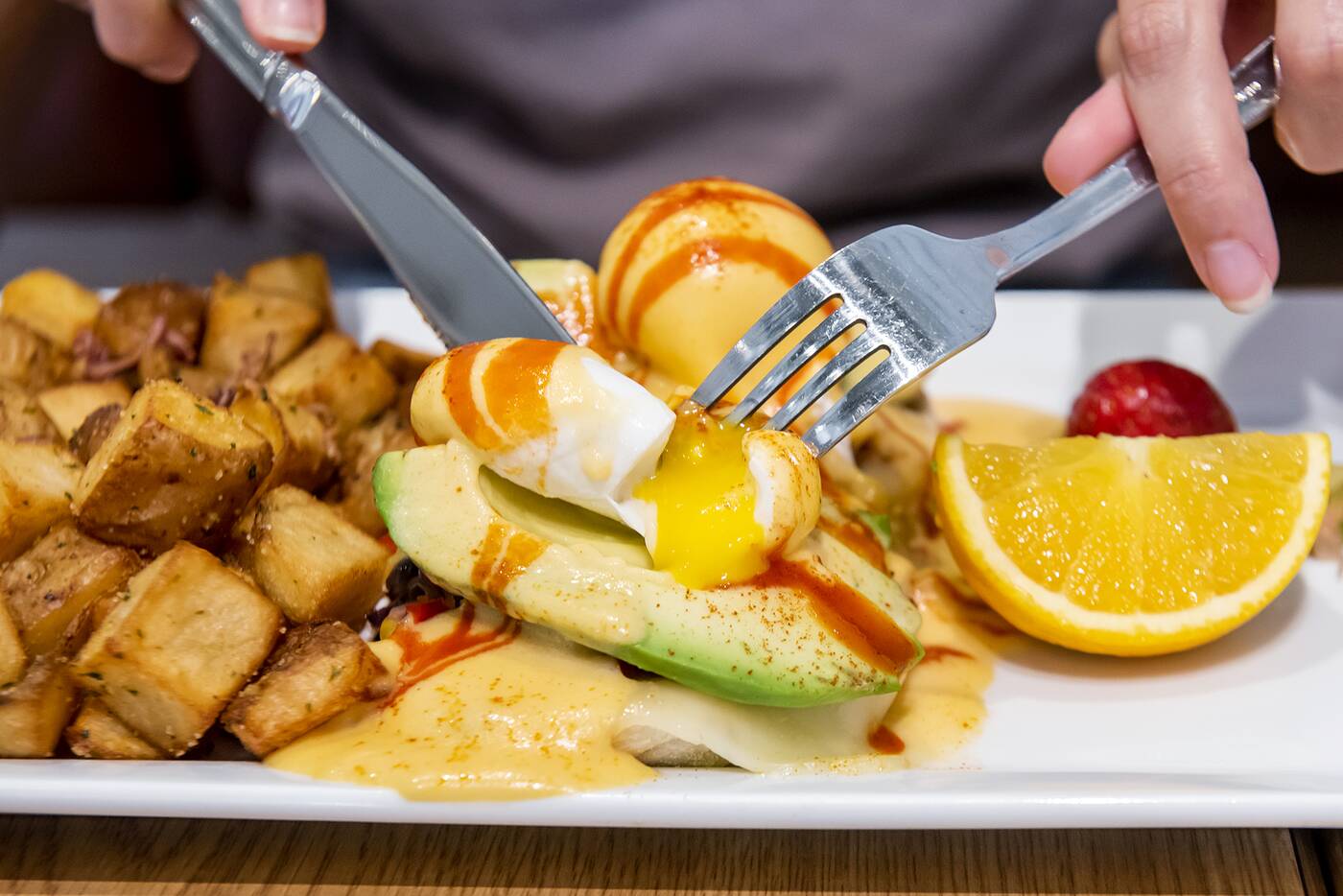 The Santa Fe ($15.95) is best drenched in the spicy variation of the creamy sauce coming also with black bean, peppers and corn blend, avocado, onions, tomatoes, cheddar and some Sriracha. 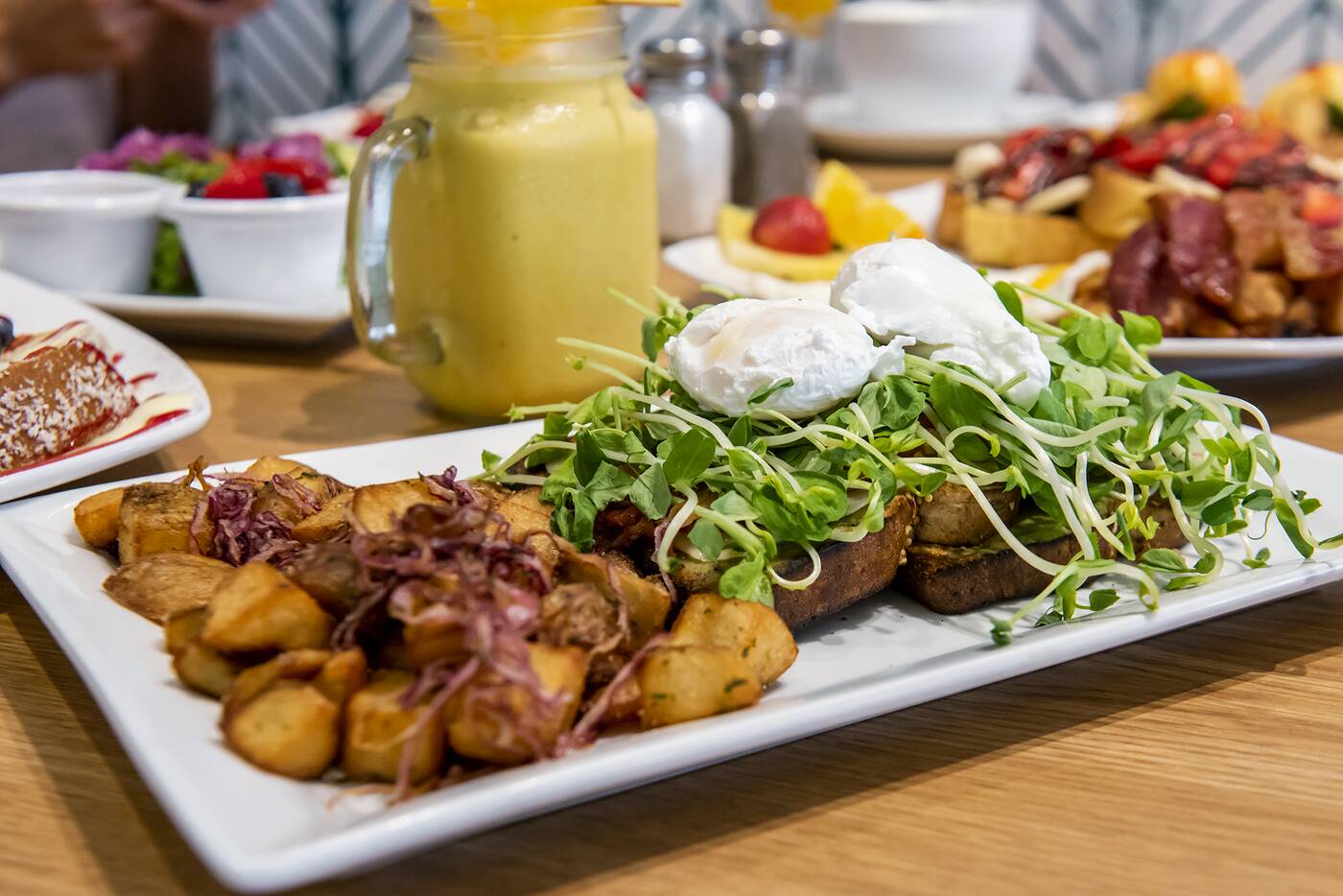 The avocado bacon toast ($16.95) is served with a pair of poached eggs, guacamole, cheddar, tomatoes, and snow pea sprouts on two slices of 14-grain. Just like for any one of the egg breakfasts, a side of crispy and well-salted homefries is the side. 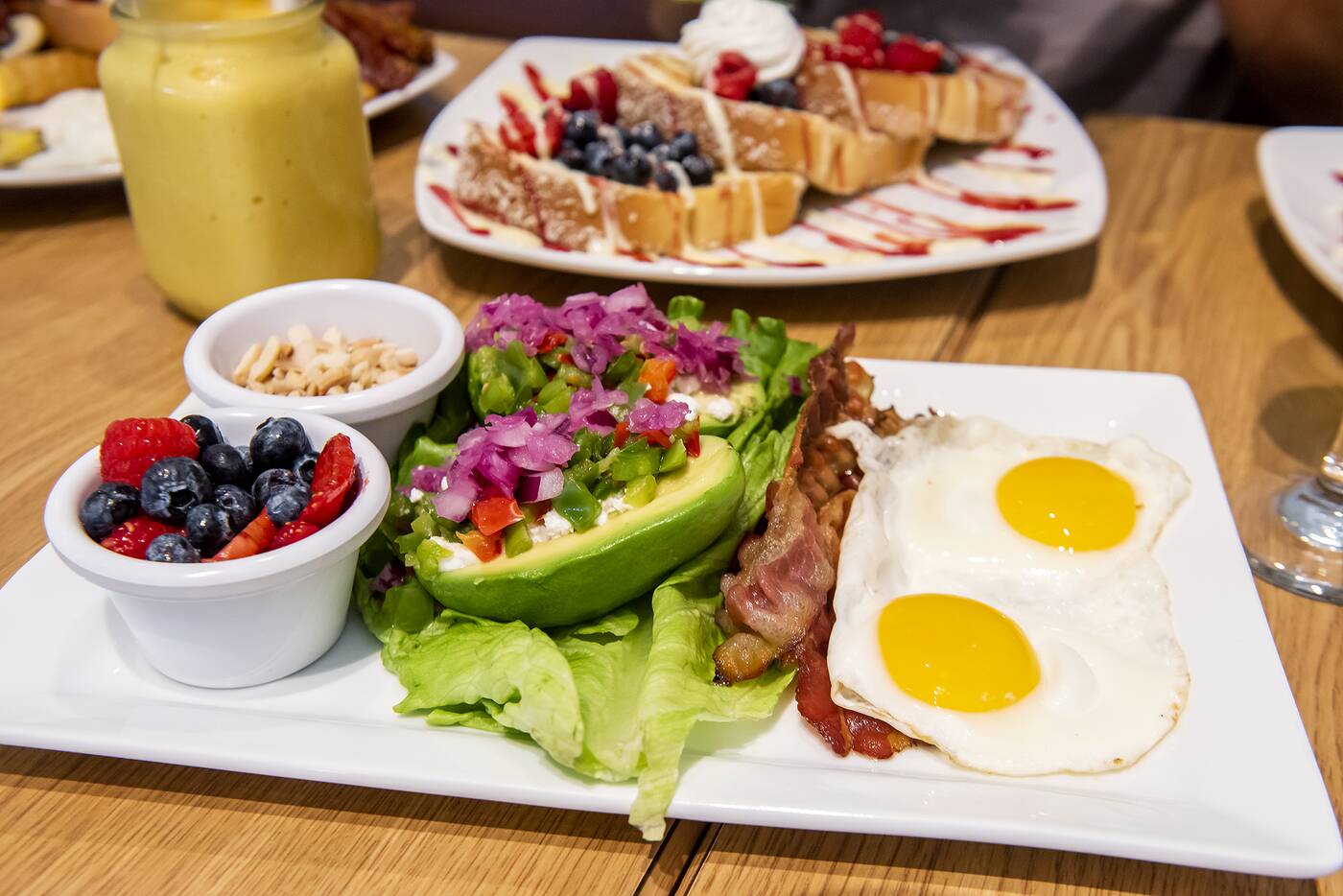 A few lighter, more health-conscious options round out the list of offerings. The keto ($17.95) is a vast contrast from the sugary breakfasts with two eggs, bacon, and avocado laid on top of lettuce and filled with goat cheese, peppers and onions.

Seasonal berries and roasted almonds also come on the side for sprinkling. 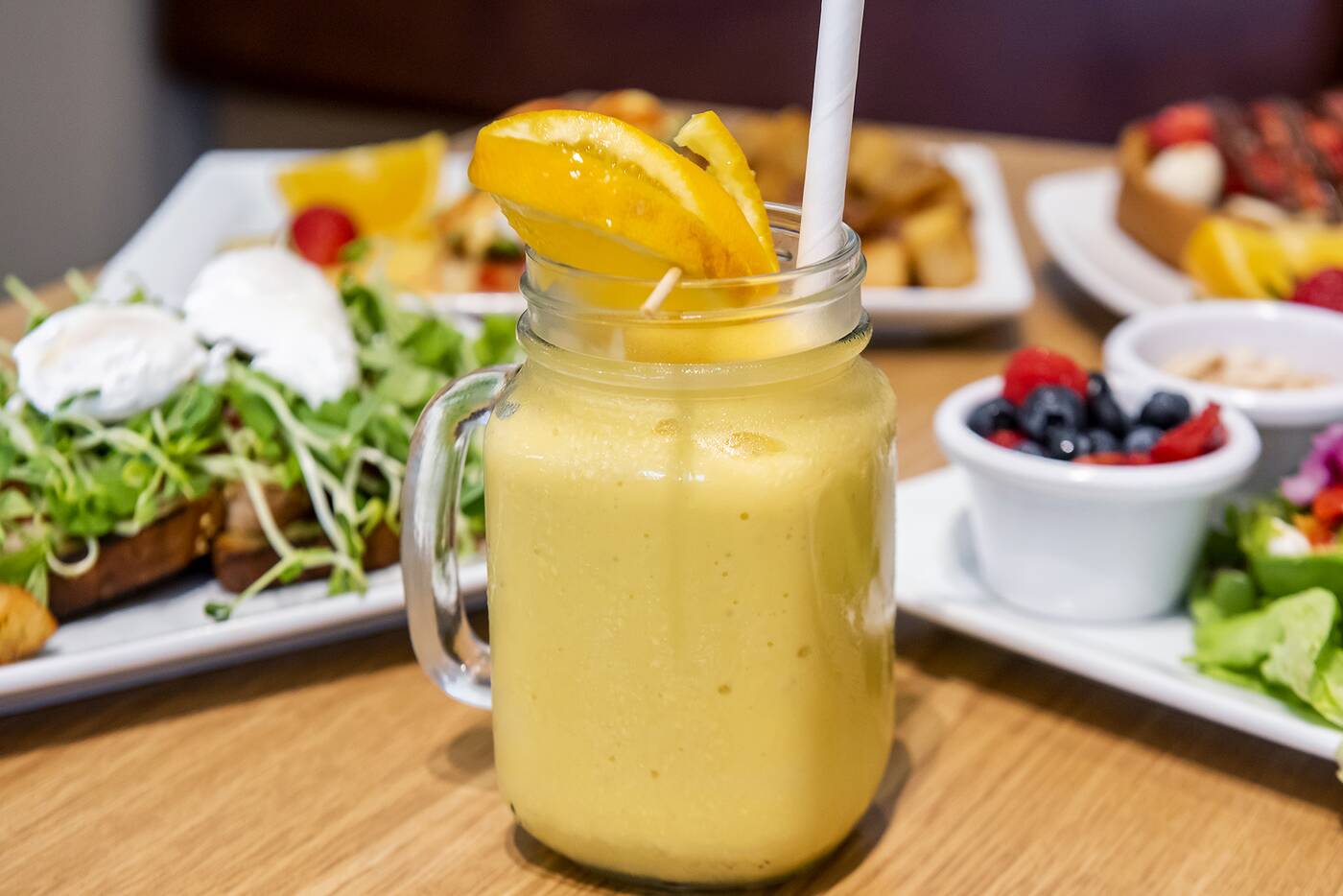 Real-fruit smoothies make for a refreshing sip between bites if you have enough room. The mango tango ($6.25), a combo of bananas, Greek yogurt, pineapple juice, and of course, mangos, is the most popular. 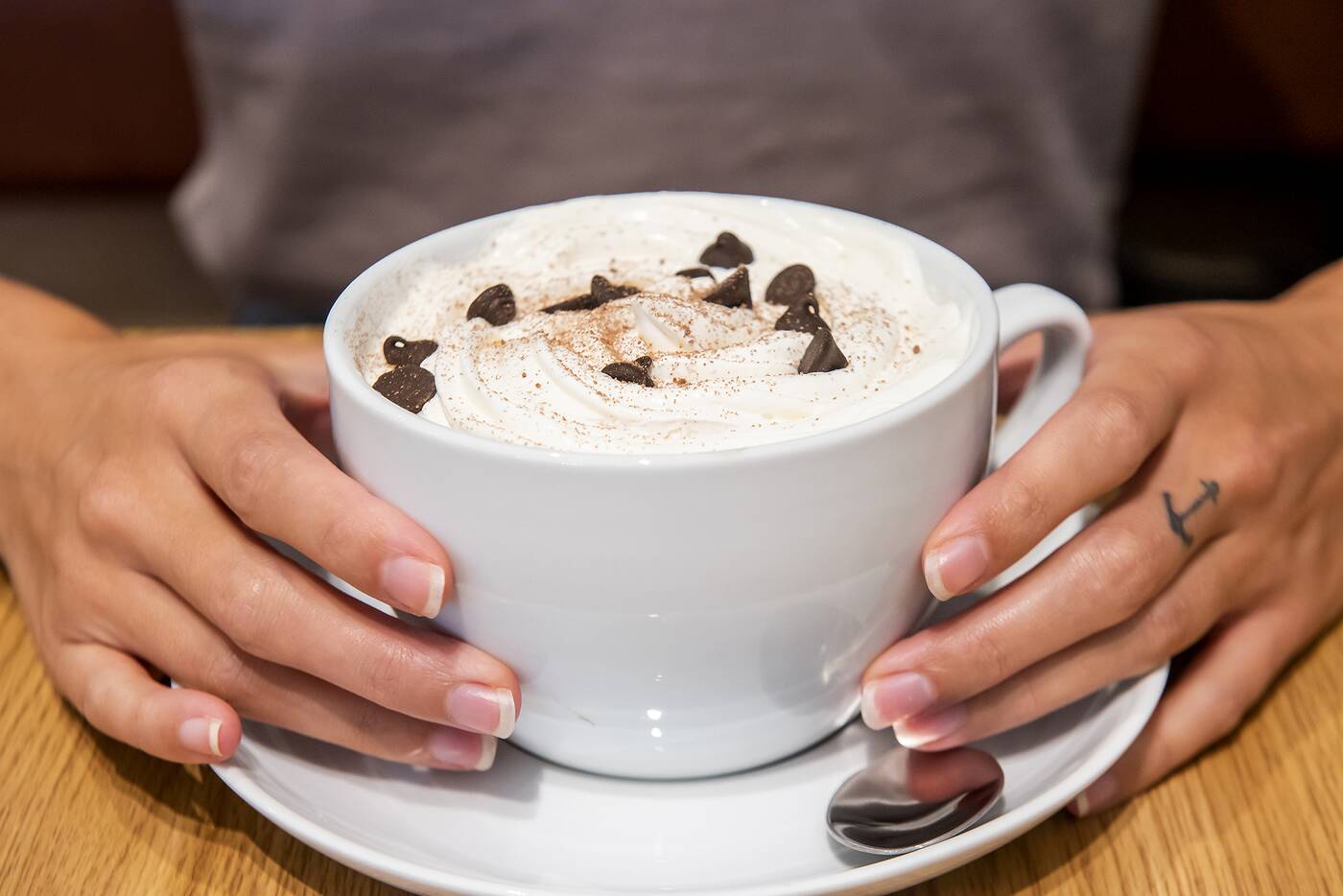 There are also Nespresso drinks like the chocolate macchiato, which comes in a cup ($4.95) or a big round bowl ($5.95) for those in need of an extra caffeine boost. 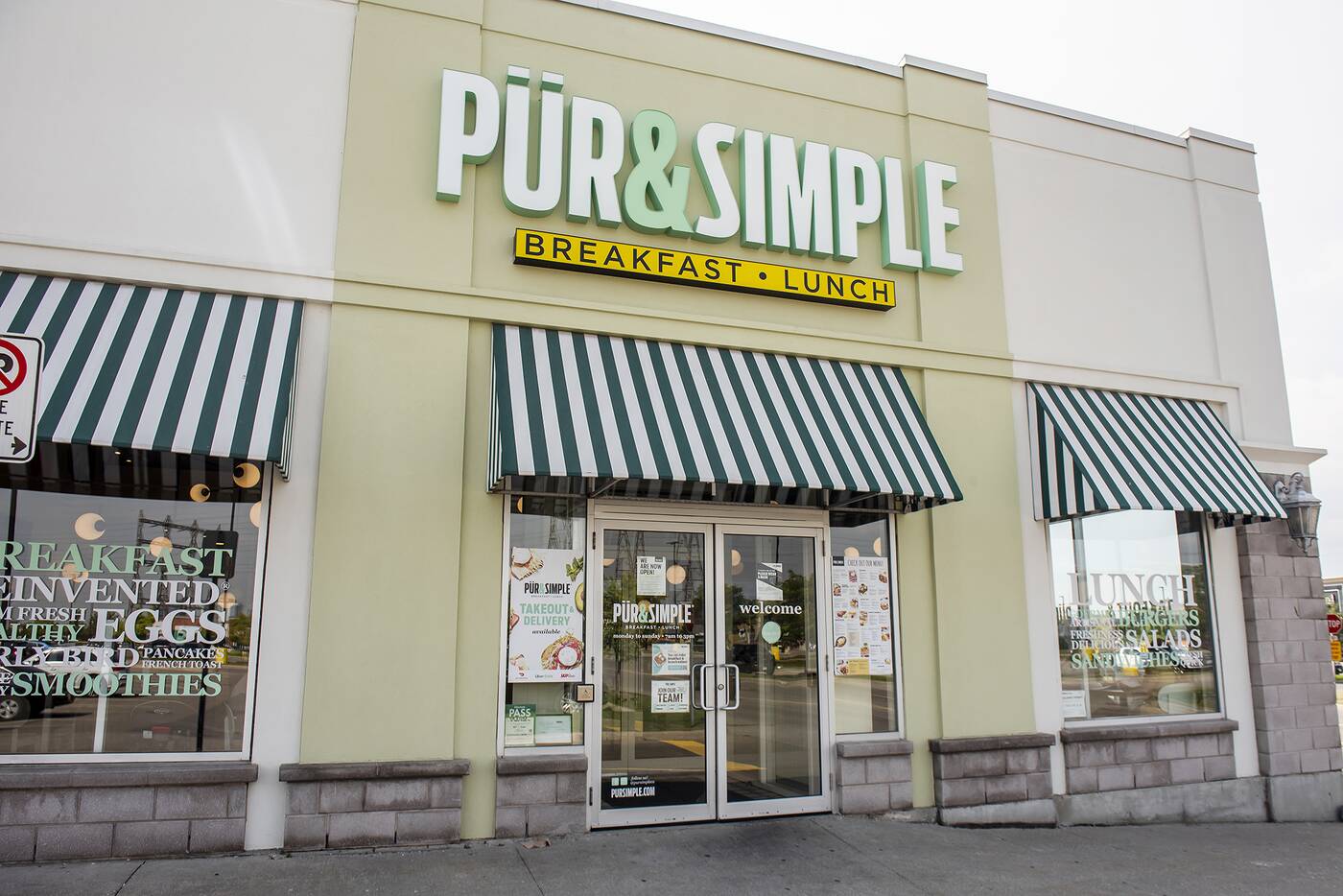