Planet Donut pretty much serves candy with a side of donut. Proudly perched in an old-school cake display by the front window, these sweet treats seem to exert a seductive power on unknowing passersby, compelling them to slow down and peer into the window for a better look. 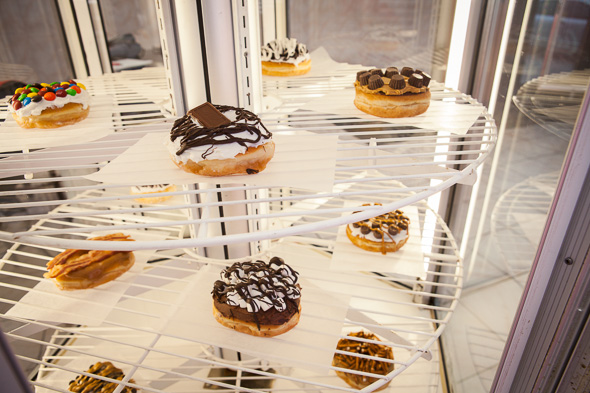 And when they do, they'll likely be enveloped in a little wave of nostalgia. Froot Loop-topped donuts, Oreo vanilla-dips, Kinder Surprise donuts, and the so-called "Rolo Mountain." Yes, all the glorious treats for which we threw supermarket tantrums back in the day. "I really thought the kids would go for the Kinder Egg donut," says Planet Donut's owner and donut creator, who simply goes by 'Dan.' "But no, it's the adults — they've been going crazy for them!" 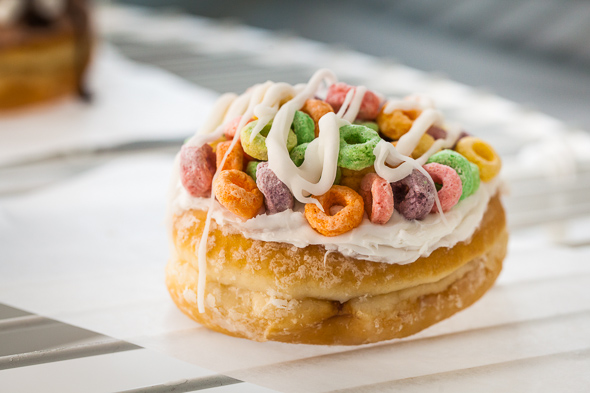 The ostentatiously adorned donut seems to be gaining a bit of traction in Toronto, what with Glory Hole Doughnuts opening in Parkdale and Paulette's Donuts & Chicken in Leslieville. But Planet Donut is markedly different, charming in the fact that it's definitely not trying to be "cool." 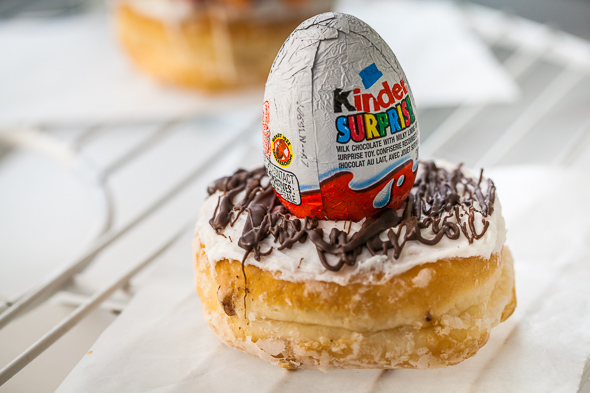 Dan, who is wearing a "Planet Donut" baseball cap Ã  la highway truck stop, tells me he did basically nothing to the space in terms of aesthetics when he moved in, noting that the palm tree murals (think shawarma shop) were already up on the walls. There is no salvage barn board on the bar, no kitschy chalkboard menu, and no zealous Instagram feed. Not that these donut aren't worthy, mind you. 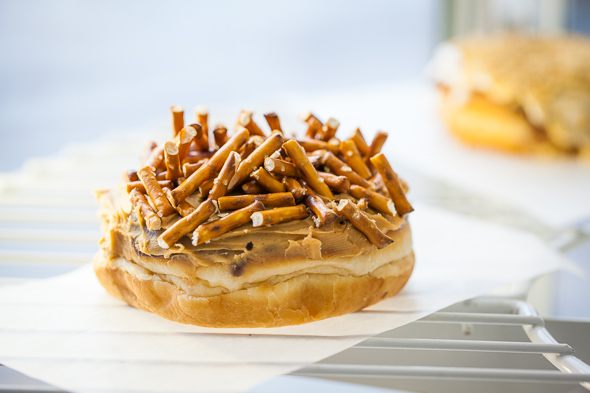 Each starts with a homemade honey-dipped base, and then is topped with an assortment of icings, chocolates, candies, and more. Dan undersells the donut itself, telling me its more about the toppings than the actual donut, but I'm rather impressed by the not-too-sweet, chewy base. The icing, of course, delivers that sugary punch, but the donut has more of a tempered, bready taste. 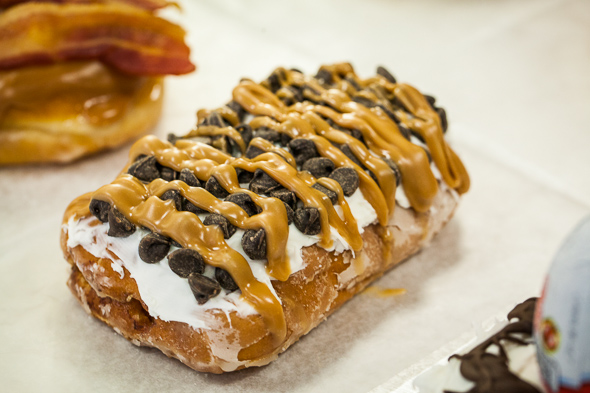 An electrician by trade, Dan tells me he's been interested in donuts ever since he was a kid, remembering fondly how a woman in the neighbourhood would bring plates of fresh donuts to his parents' corner store. "Well, ever since then I've just been infatuated with them," he says. "It was about a year ago I thought, 'I'm really going to do this.'" 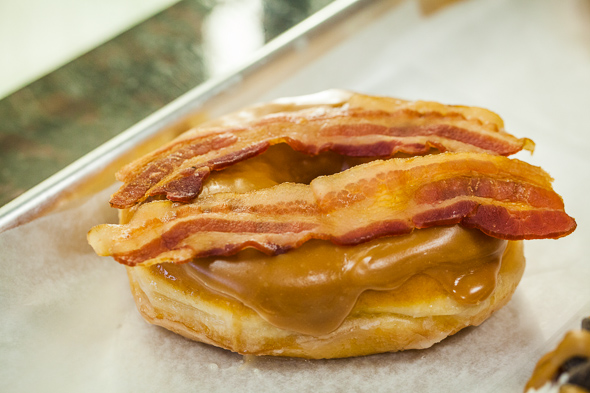 When Dan first opened Planet Donut, however, the place served everything from burgers to panini, salads and sandwiches. "I just thought there was no way that donuts could pay the bills." But Dan has since reduced his menu to just pizza and donuts, honing in on the items that actually took off with customers. 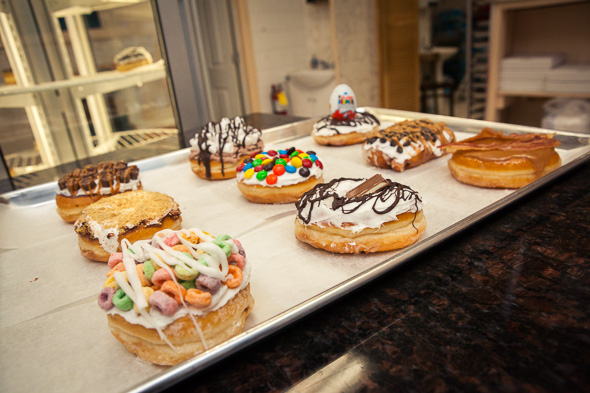 "It's a lot of word of mouth, a lot of people passing by," Dan says. "And then there are the kids from the school over there — I've already had some donut-eating contests for them; it'll probably be a regular thing." So far, the contests have entailed a race to eat a single donut, chew a piece of bubble gum, and blow and burst a bubble, as well as a competition to eat a single Kinder Surprise donut and build the toy before any of the other contestants. Which, despite my age, just sounds awesome. 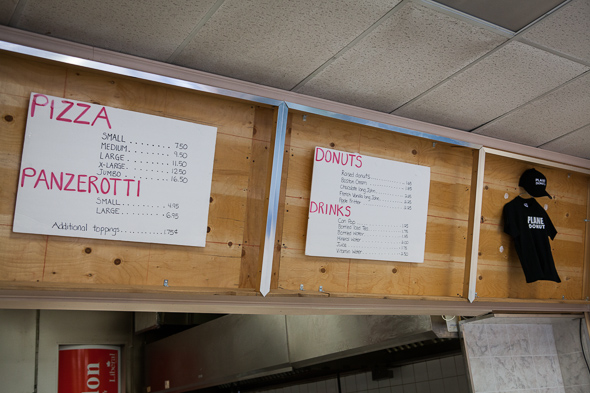 At $3.75 each (except for the Kinder donut which is $4.50), these treats are certainly not of the Tim Hortons $0.90 creed, but Planet Donut does bake them fresh each day and the taste, of course, can't be compared. There is currently about a dozen different varieties (the peanut-butter pretzel-topped is Dan's favourite), with potentially more on the way. In the meantime, I've got a Kinder toy to build. 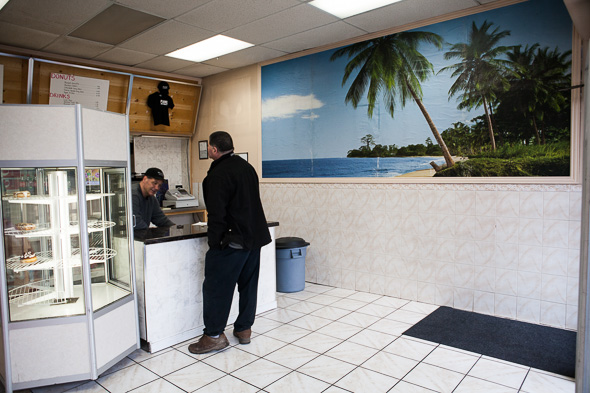 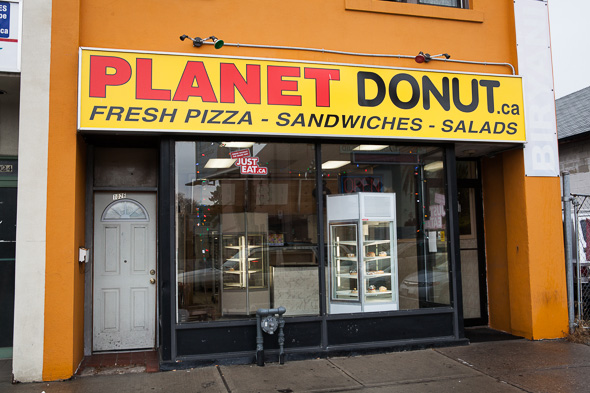