Pinky's Ca Phe is currently open but their offerings and services may be affected due to the pandemic. Please contact the business directly for more information about any changes. Is this your business? Please contact us if you would like to update this message.

Pinky's Ca Phe is tucked away on Clinton St. just north of College in Little Italy. Like its sibling spots, this Vietnamese snack bar from owner/chef Leemo Han, the restaurateur also behind Hanmoto and OddSeoul, is unassuming from the outside.

Leemo dreamt up the idea for this place and then, serendipitously, found this space (it was previously Fuel House) listed by a realtor online, who'd described it – funnily enough – as perfect for something like an Oddseoul or Hanmoto. 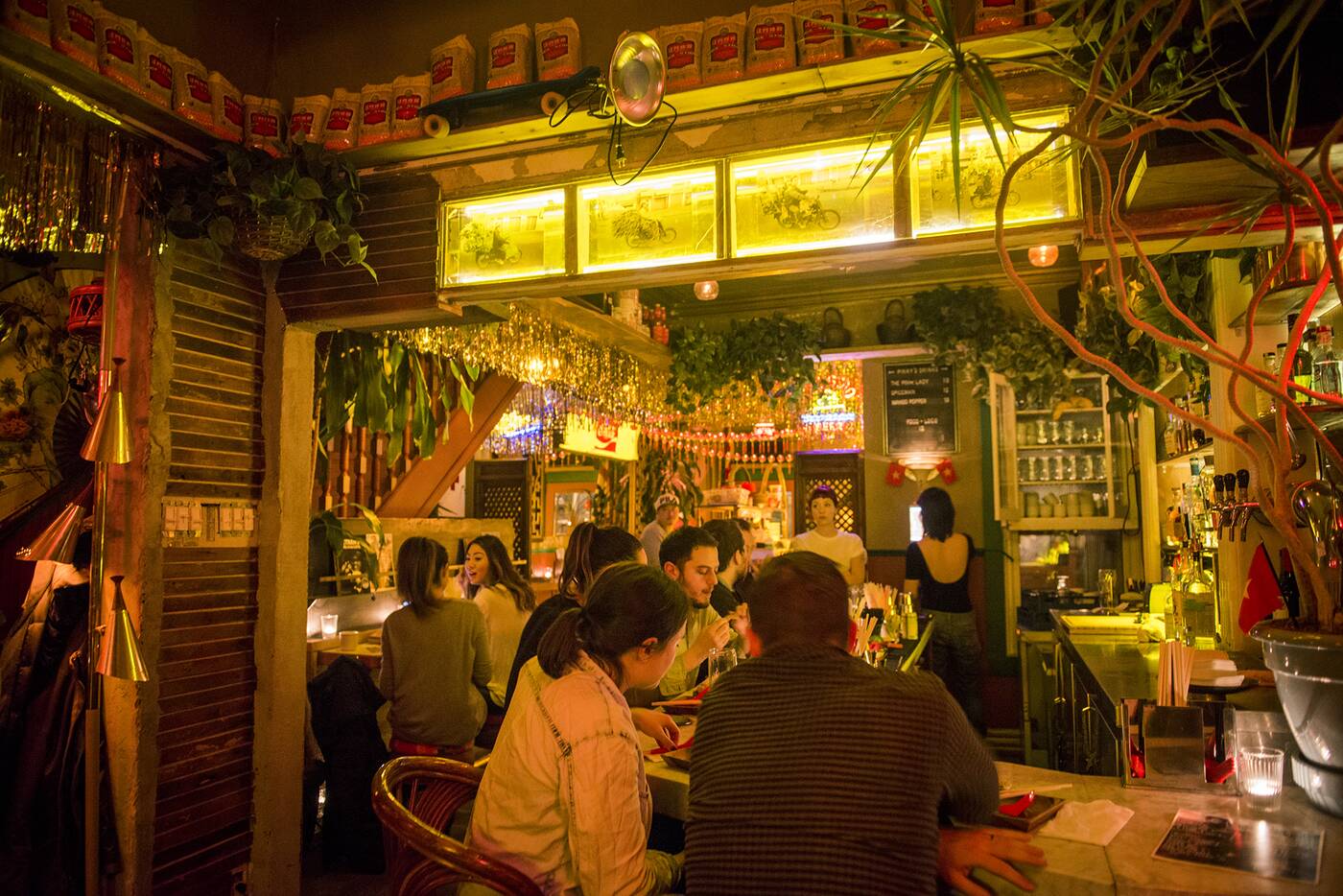 And it’s true; this narrow house has a similar off-the-radar vibe. It's intimate and dimly lit, with a front enclave separate from the main part filled with kitschy-cool decor. Leemo and General Manager Ihn Huh renovated and outfitted everything themselves. 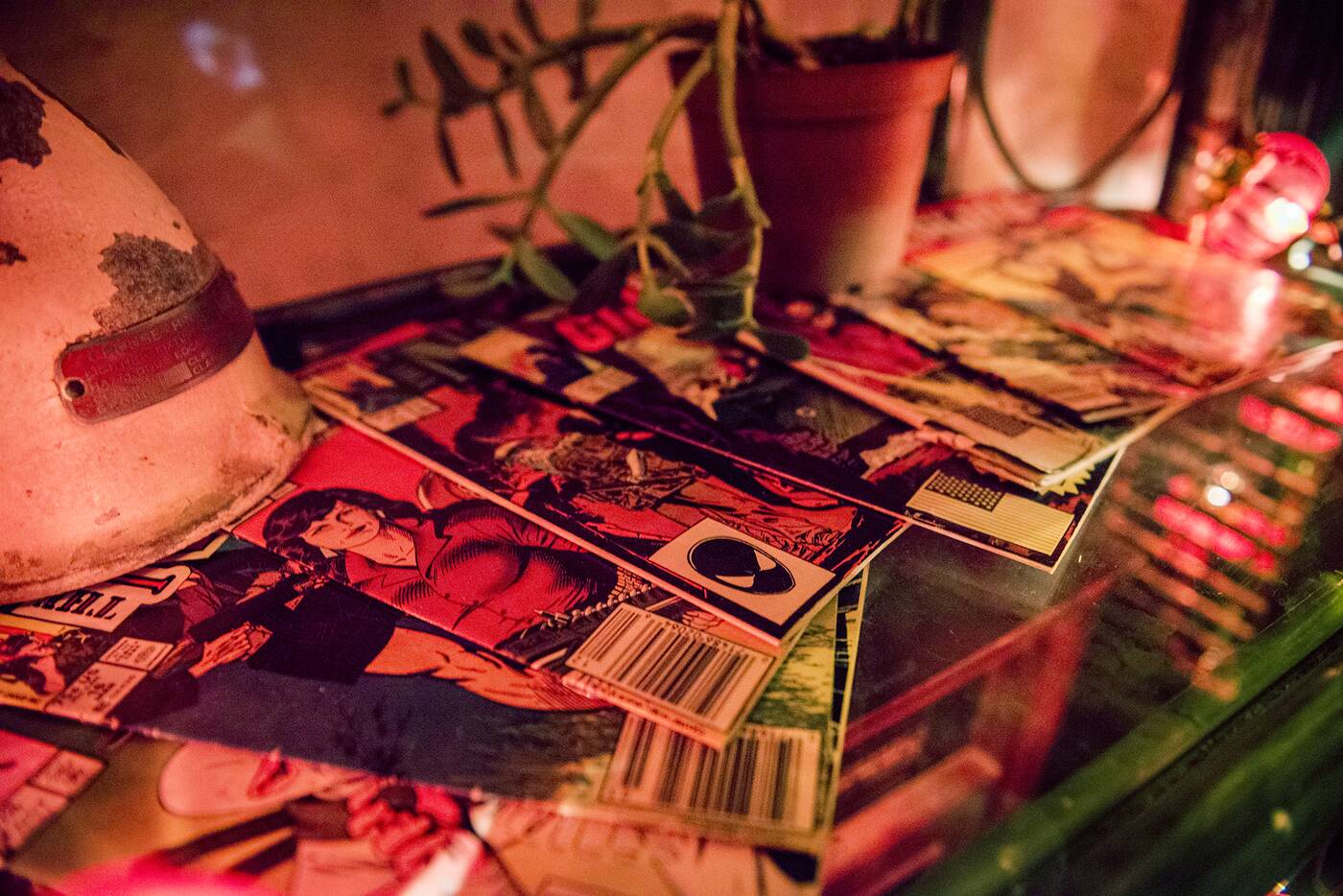 A collection of G.I. Joe comics are displayed by the entrance, and inside it feels like I've been transported back in time; there are neon drink signs, strings of red lantern lights, plants galore, upholstered hibiscus-print swivel stools and U.S. and Vietnamese flags on the walls. 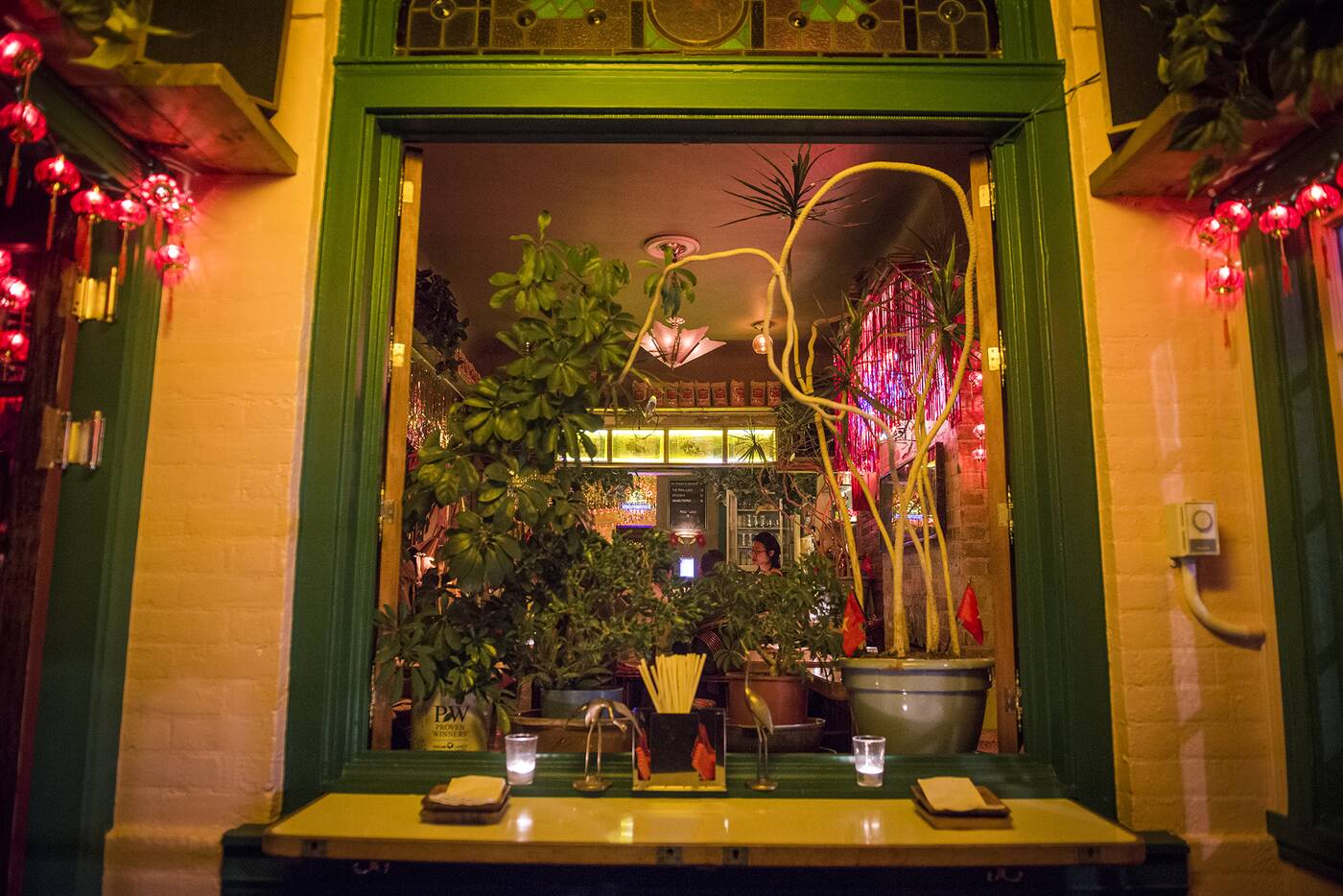 The intention was to have the joint look and feel like a place from late-'60s, early-'70s Vietnam that G.I.’s would visit regularly during the war, and that's exactly the impression I get upon entering. 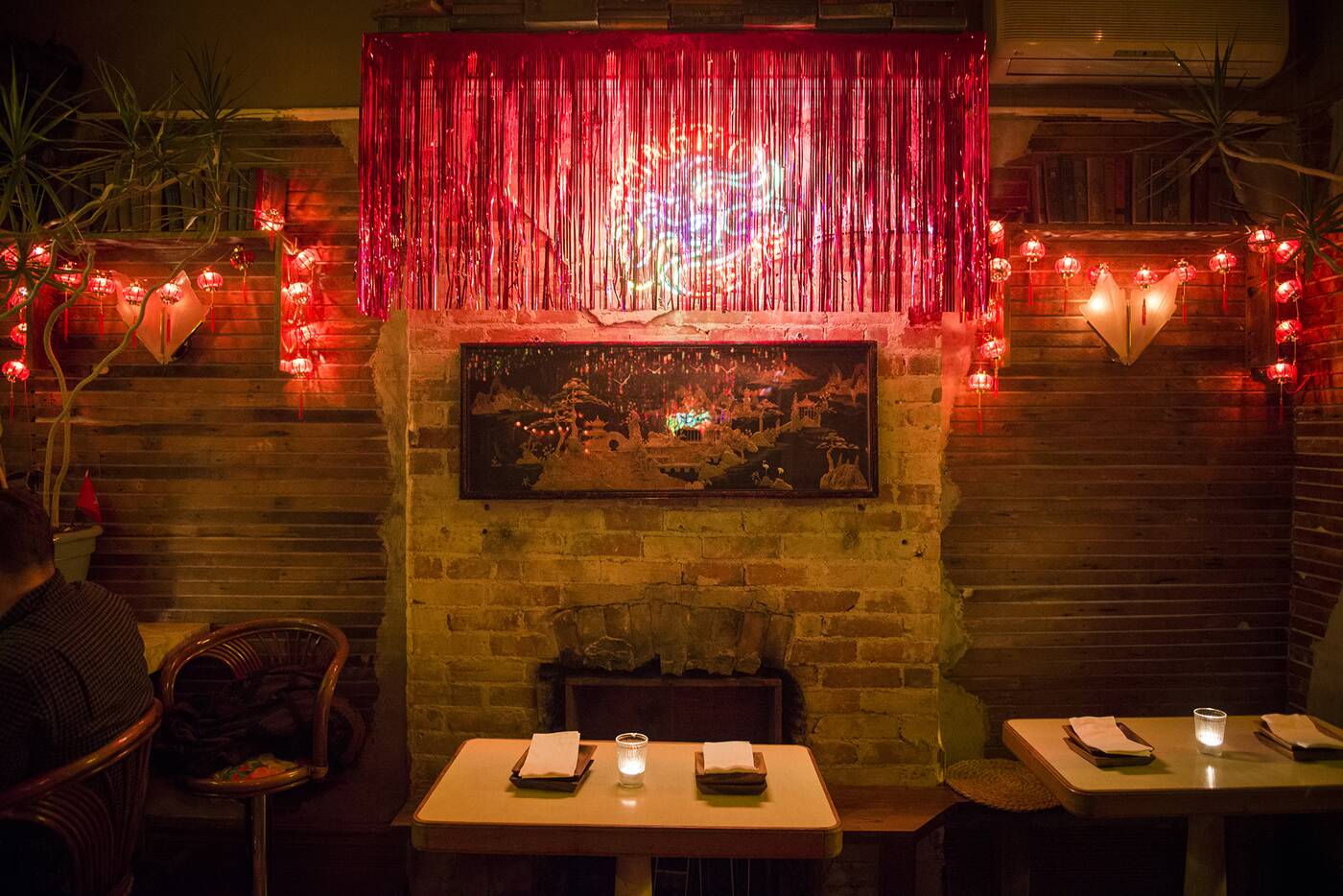 They've captured that essence perfectly, down to the soundtrack that includes Vietnamese crooners who sound like they’re from that era. 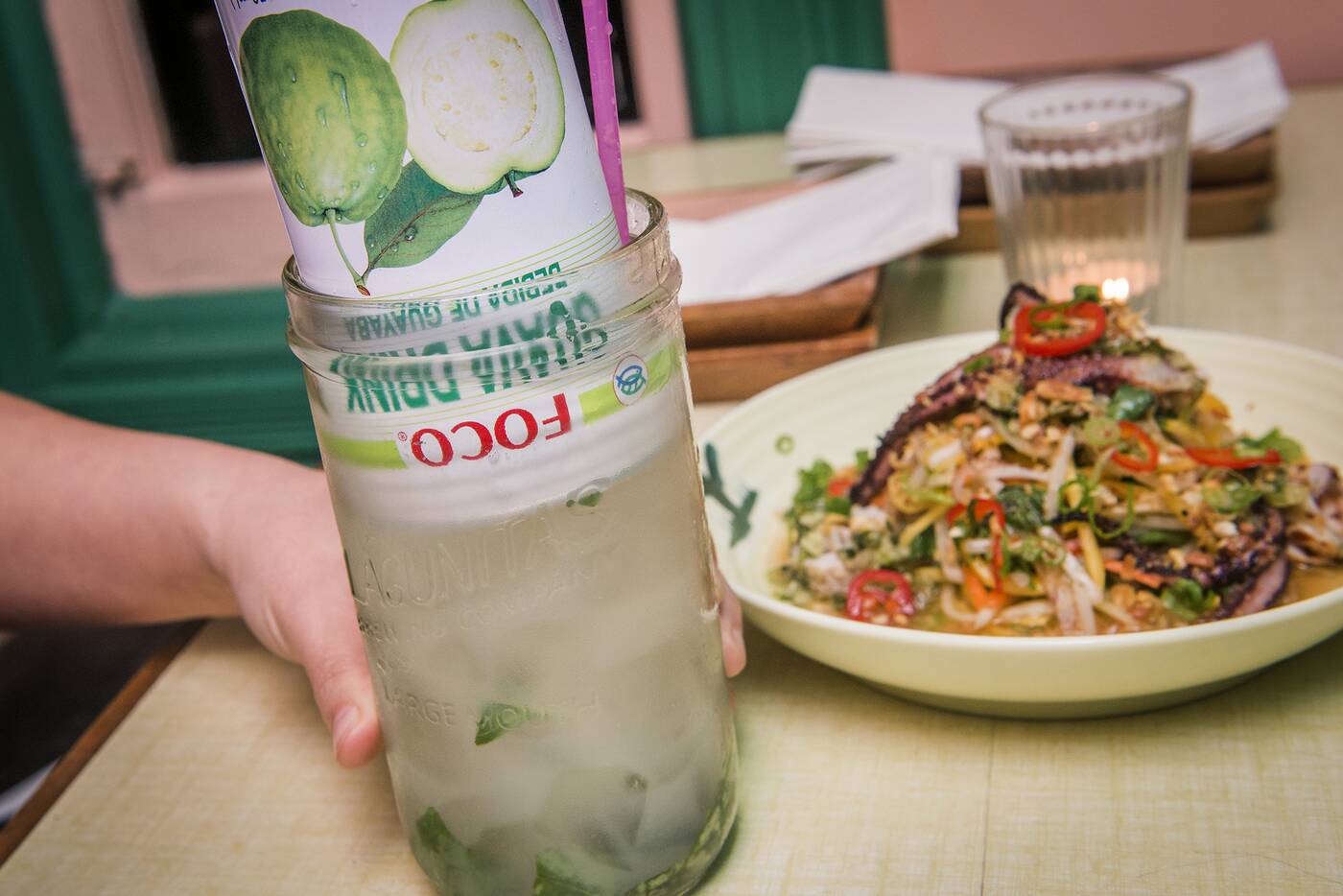 There is also the Foco Loco ($12), which mixes a Foco tropical fruit juice flavour with muddled herbs and spirits. These are lower alcohol content options to the other cocktails and are meant to be fruity and refreshing complements to the eats.

I try the guava one muddled with Thai basil, some lime juice and white rum, and it's presented with the can of Foco upside-down in the glass, a play on the overturned Mexican beer bottle. 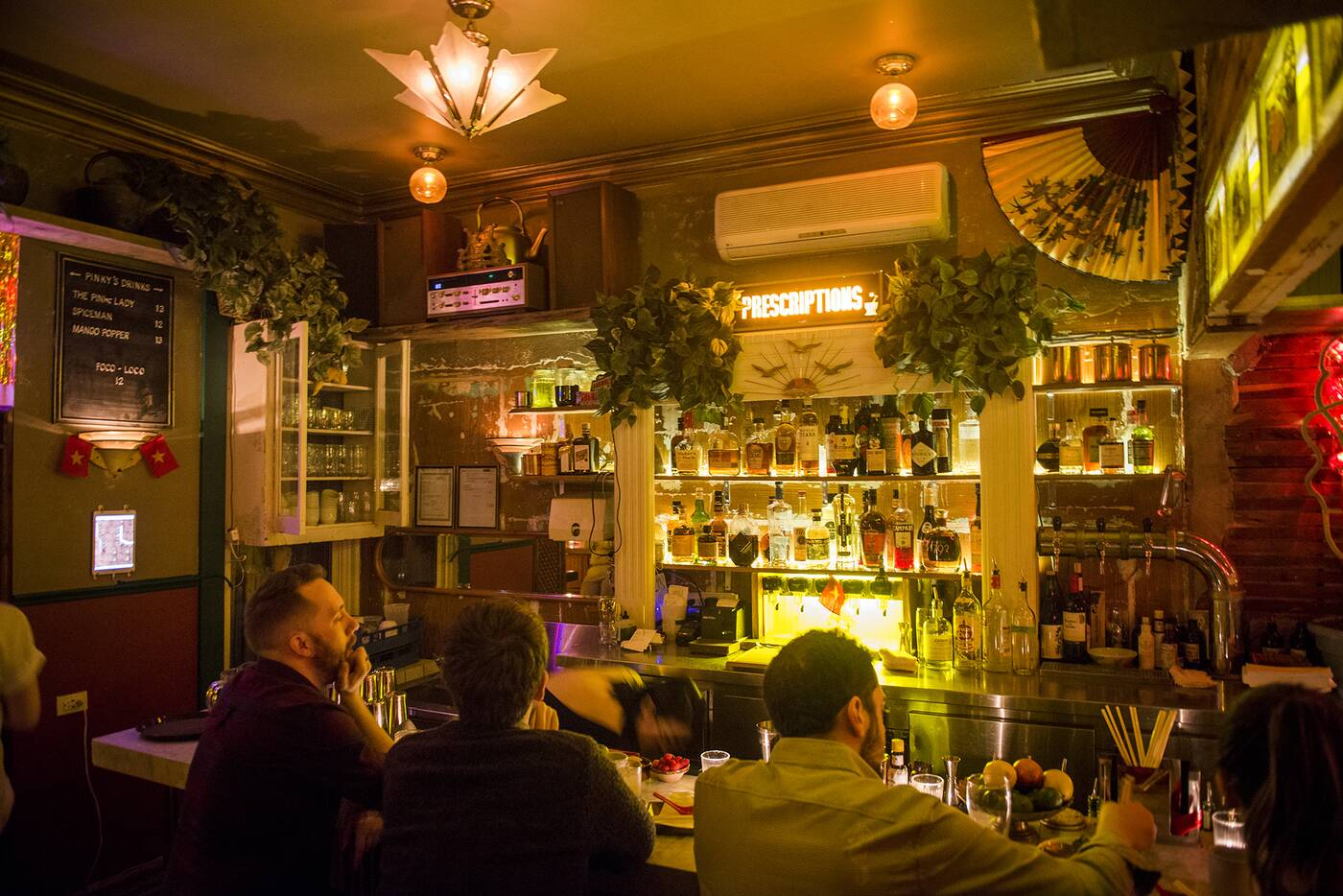 On the short menu are dishes that are packed with Southeast Asian flavours. In addition to the small open kitchen, Leemo plans to make full use of the charcoal grill he's got going in the backyard, with clay pot curry chicken specials and plenty of seafood. 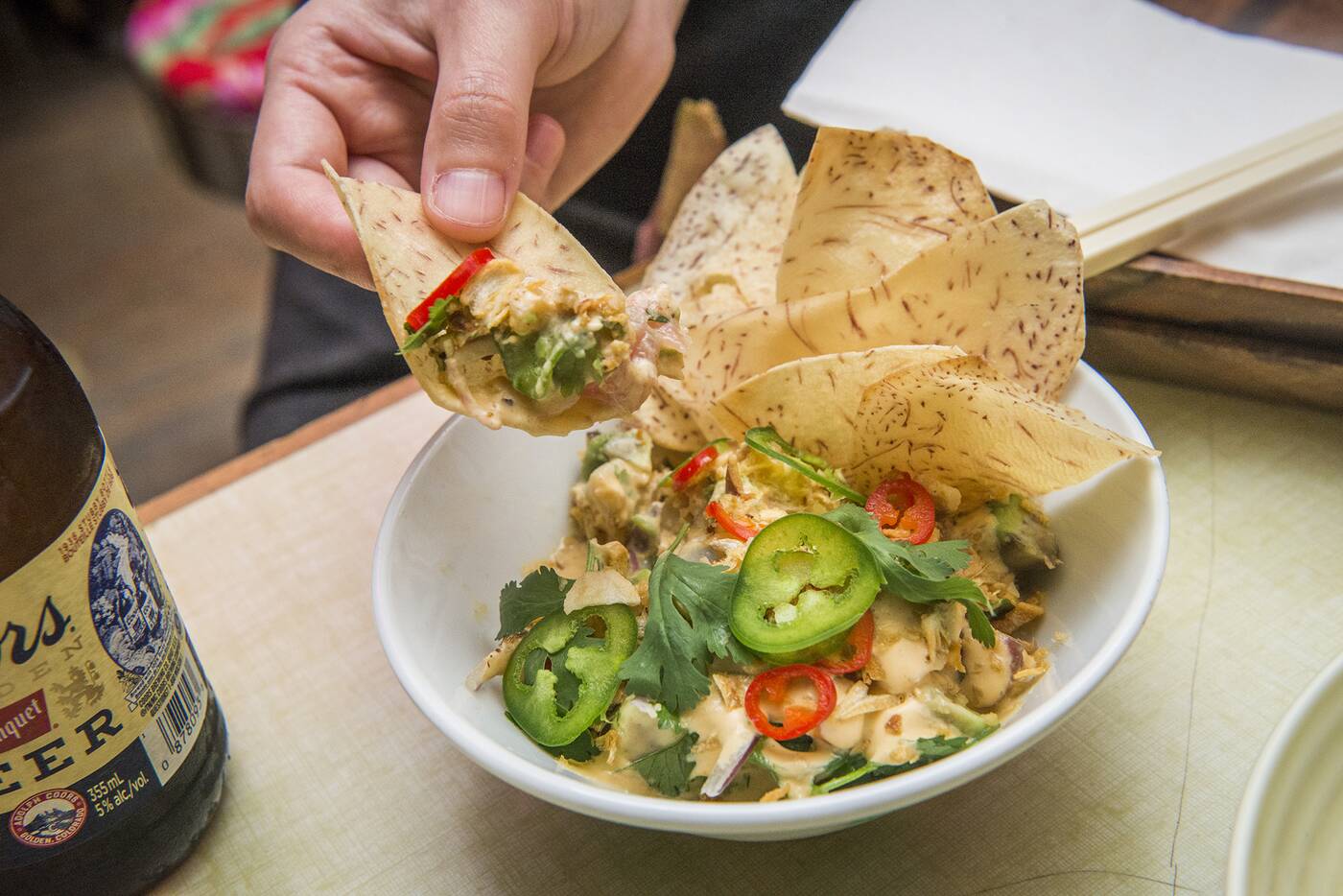 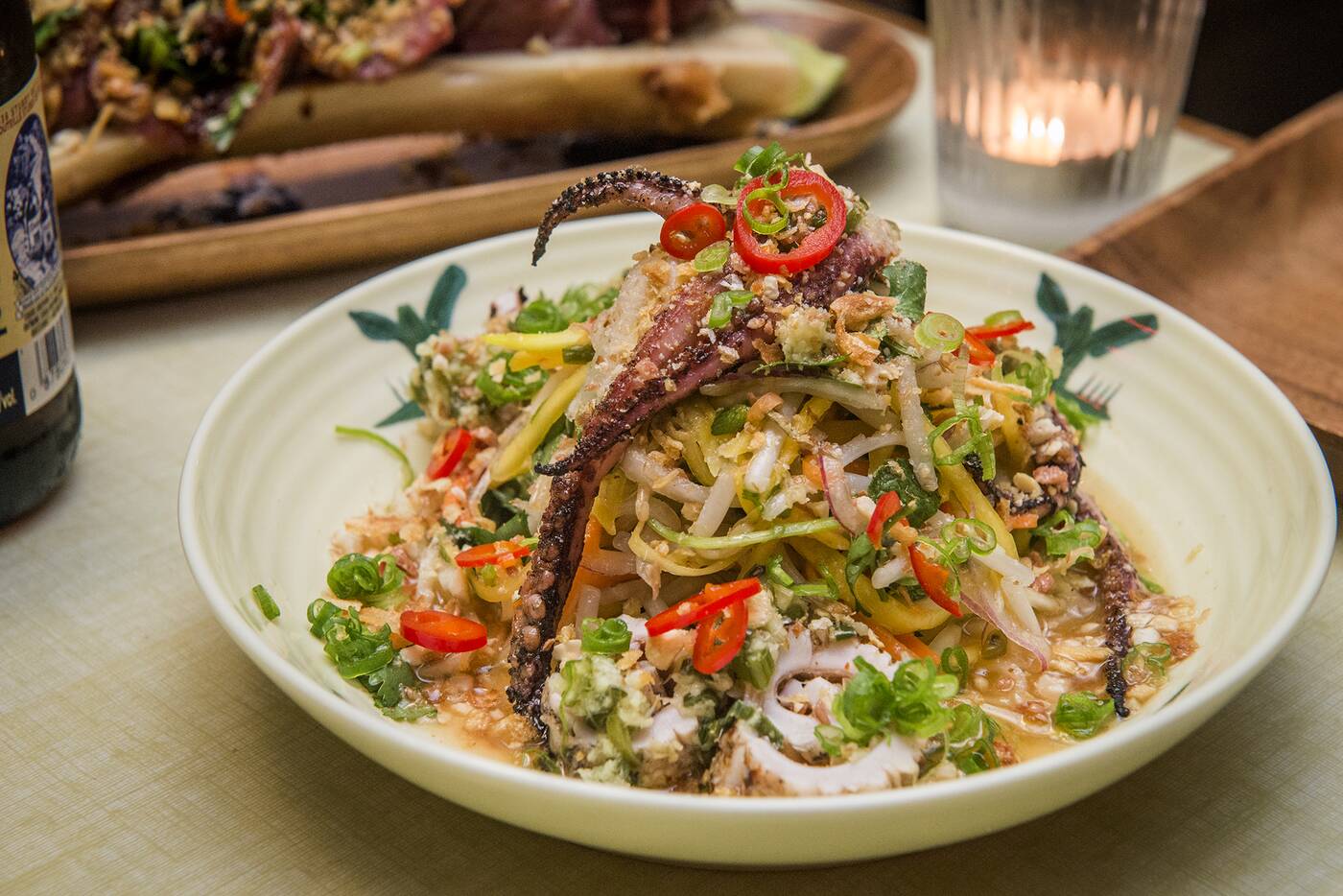 Nothing encompasses Southeast Asia to me more than that distinctively pungent entity known as fish sauce, and the flavour-explosion that is the mango-papaya salad ($12), topped with charcoal-grilled Korean squid, is doused in salty-sweet-sour-and-spicy nuoc cham. 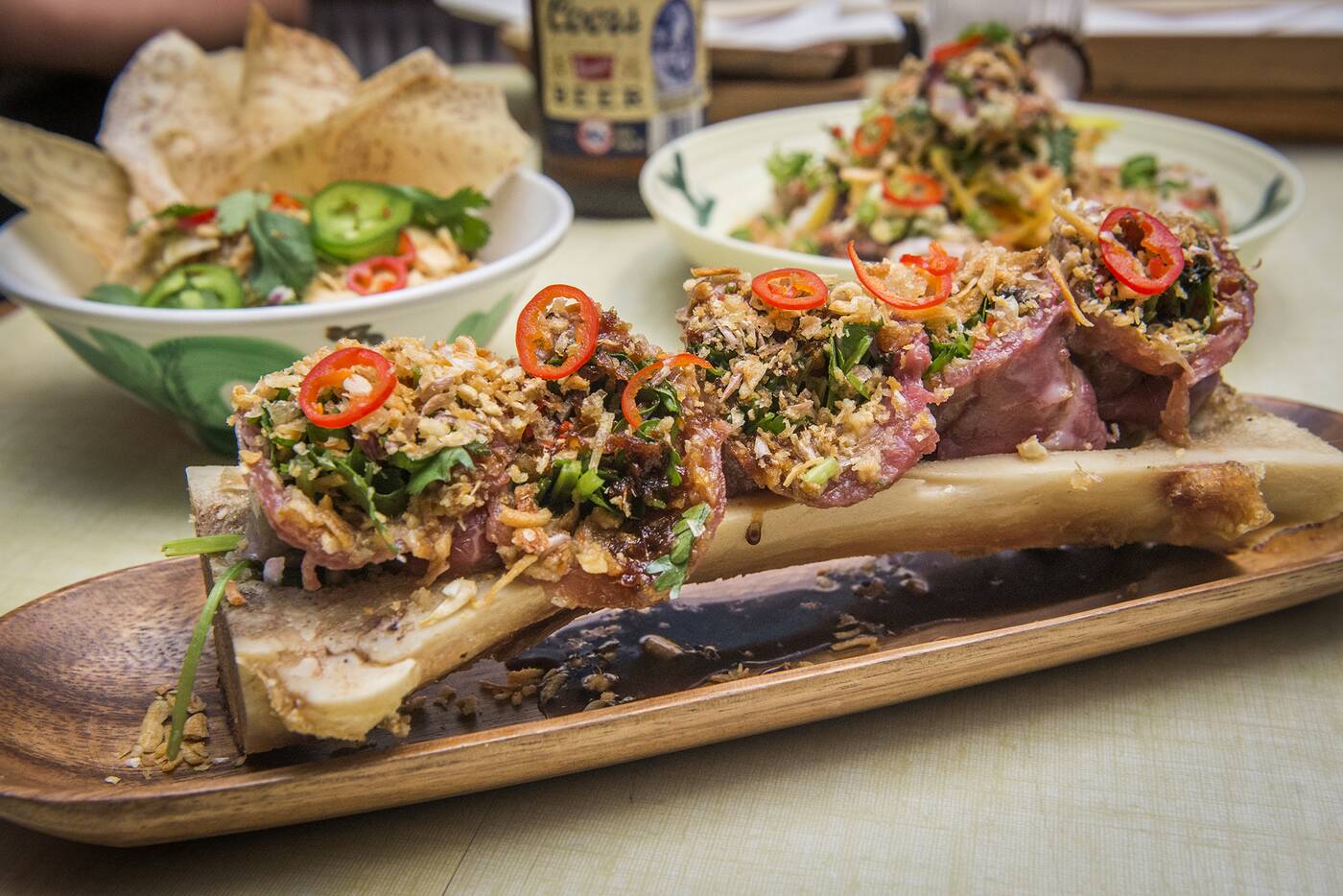 Listed only as "Marrow Beef" ($15), this dish is actually inspired by Viet/Cambodian butter beef, except the thin eye of round is used to wrap the marrow and herbs like a sliced sushi roll.

Its top is torched with fried garlic and shallots along with a soy-marrow dressing and it's impressively presented on an actual marrow bone. At first it reminds me of Vietnamese fresh rolls, until I realize it's actually the opposite, as it's mostly made of meat instead of fresh veggies. 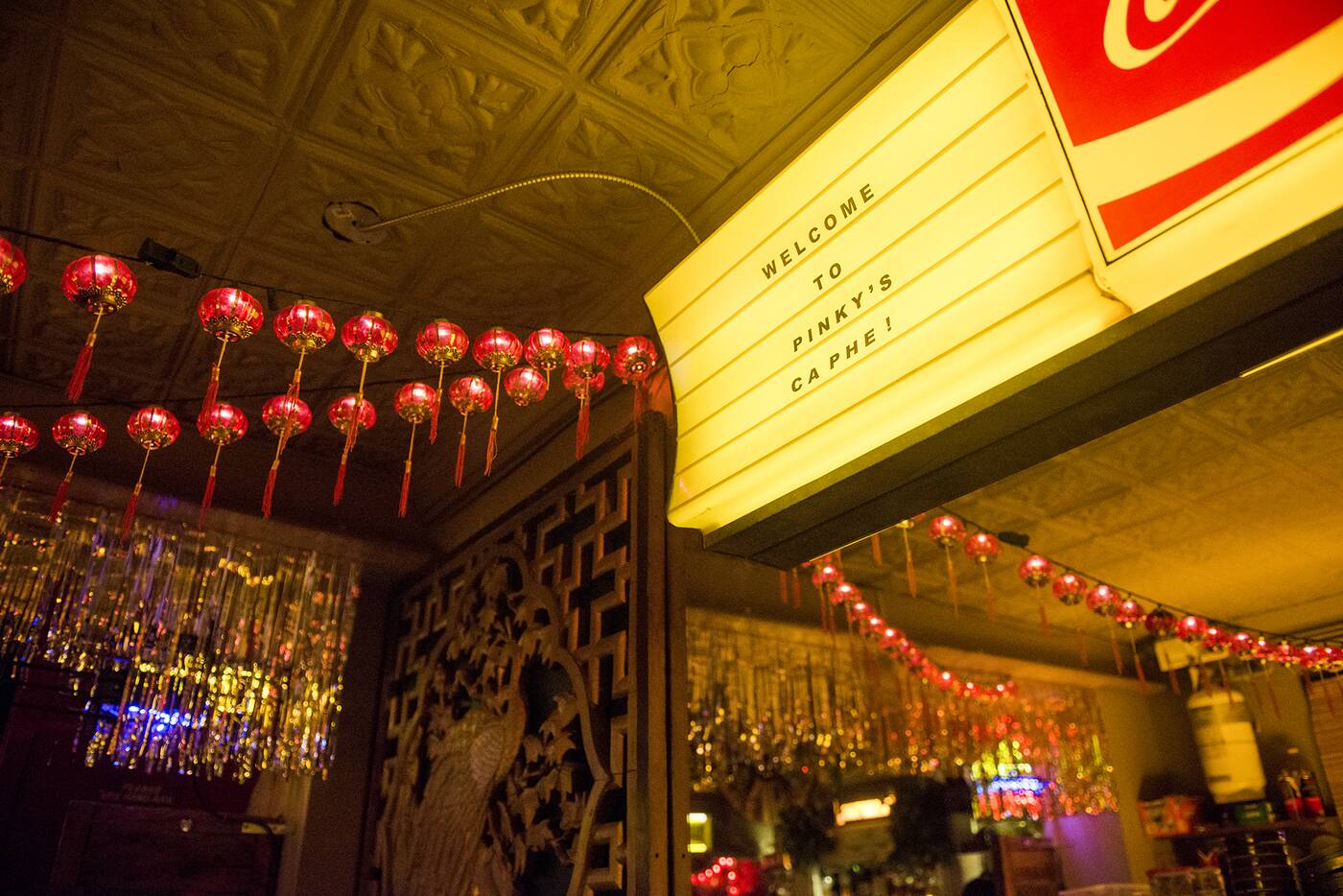 As for its name, Leemo tells me Pinky isn't one specific person. While travelling and eating his way through Vietnam, he noticed the ladies there wore a lot of pink blush and were always hiding from the sun, so he decided to name this place after them. 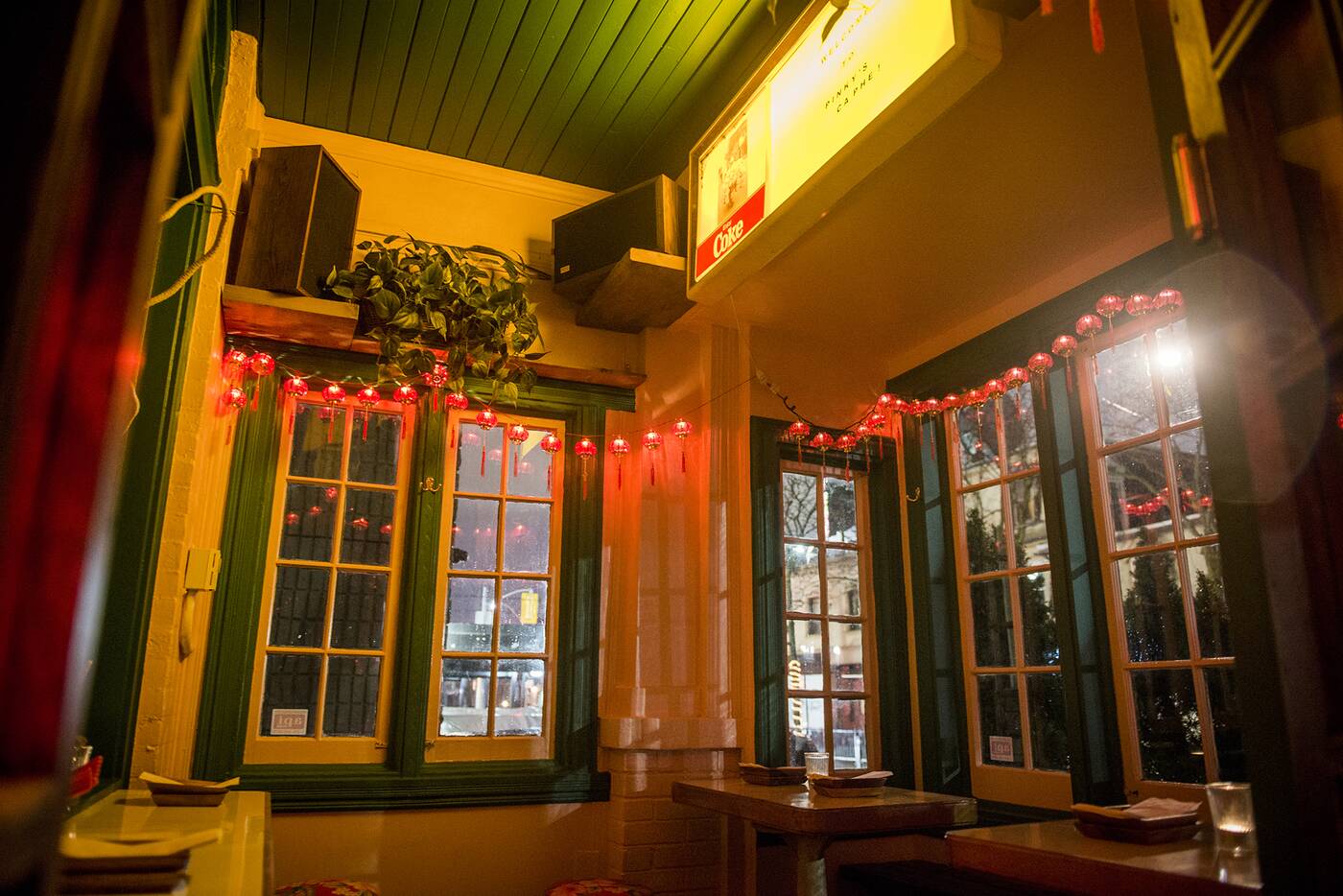 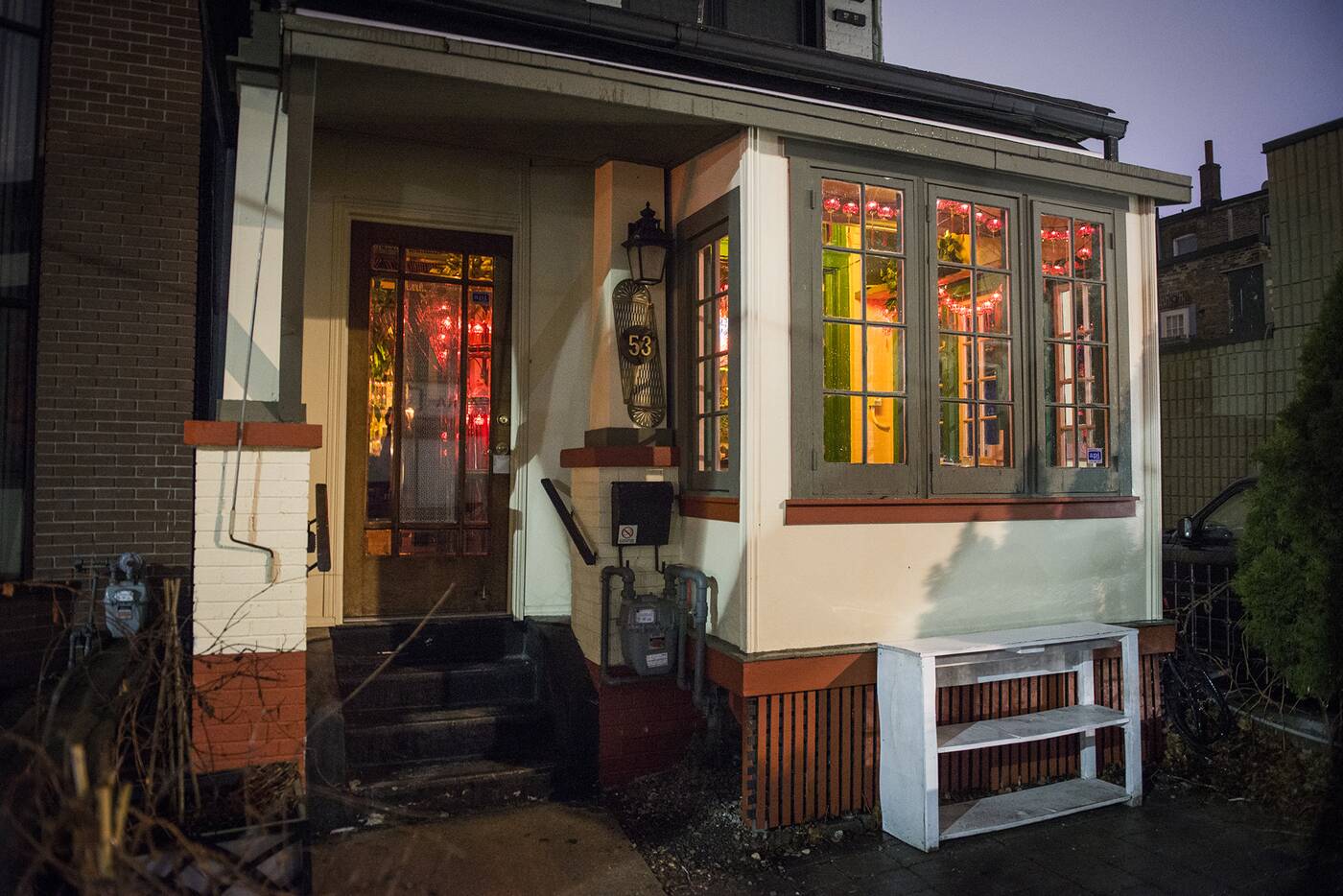