Otto’s Bierhalle is a larger, boozier incarnation of Otto’s Berlin Doner run by the same group of several friends. They came up together in the electronic music industry, and the doner place started as nostalgia for greasy food after nights out in Berlin.

You won’t find any doner on the menu here but don’t be disappointed if you come looking for German food: they’re doing huge BBQ-style platters of schnitzel or ham with piles of pickles, veggies and sauerkraut. 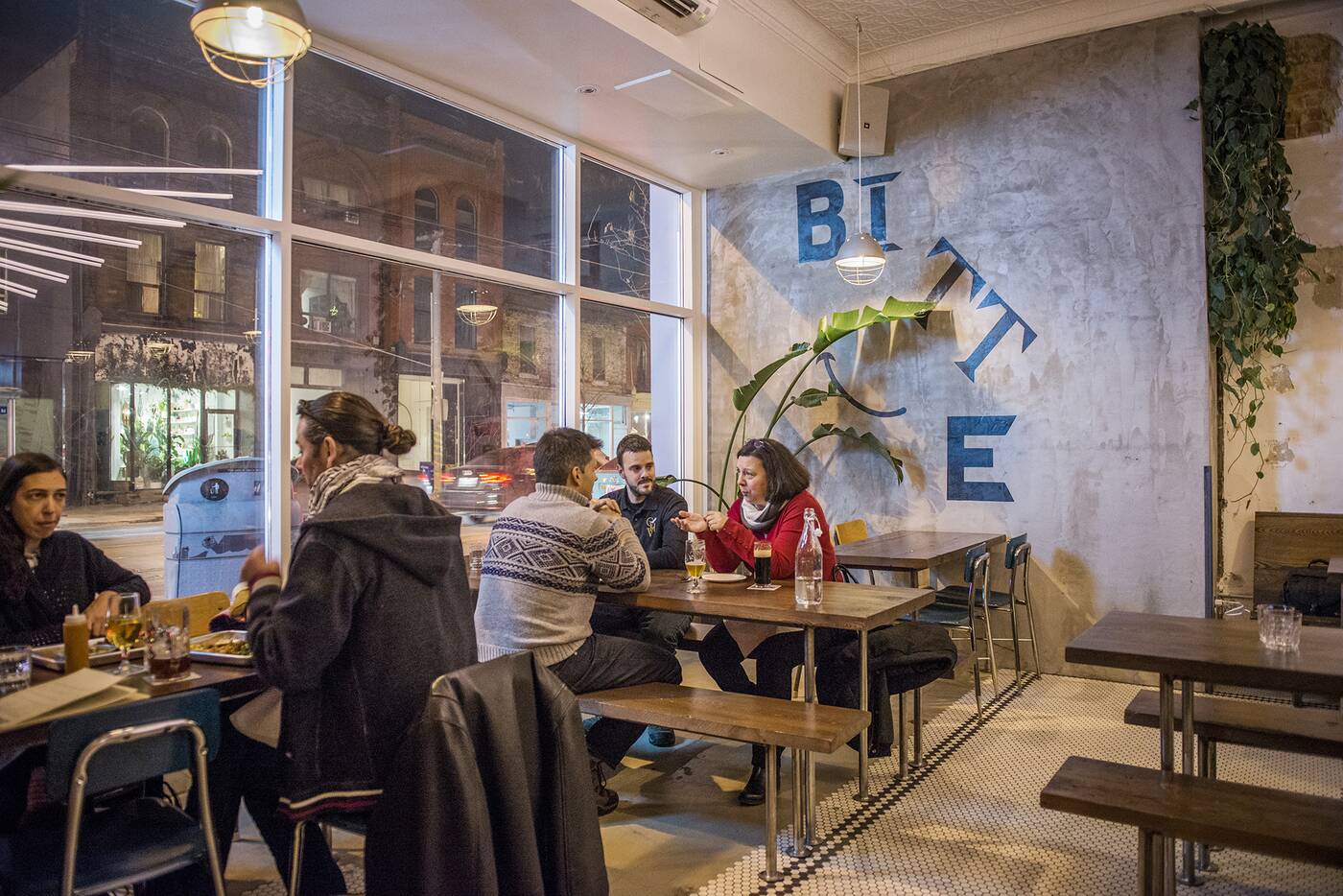 Some of the owners also own a lighting company, so that aspect of the design is especially breathtaking, huge rods curving in a pattern across the ceiling and illuminating the bar, funky bulbs entangled with vines and metalwork. 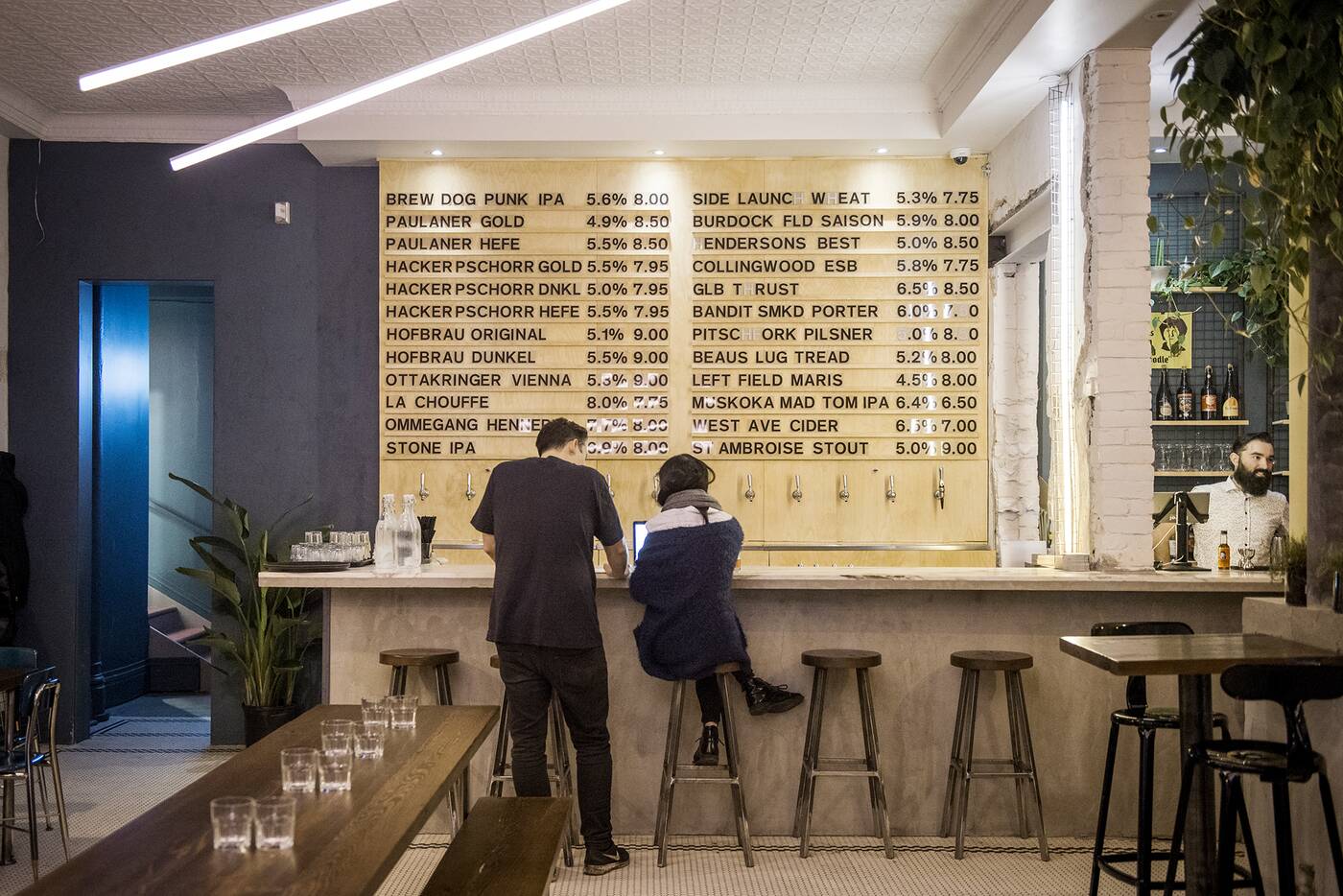 There’s an incredible range of both local and imported beers here, creeping up on a hundred options with 24 taps and up to 50 or 60 bottles. 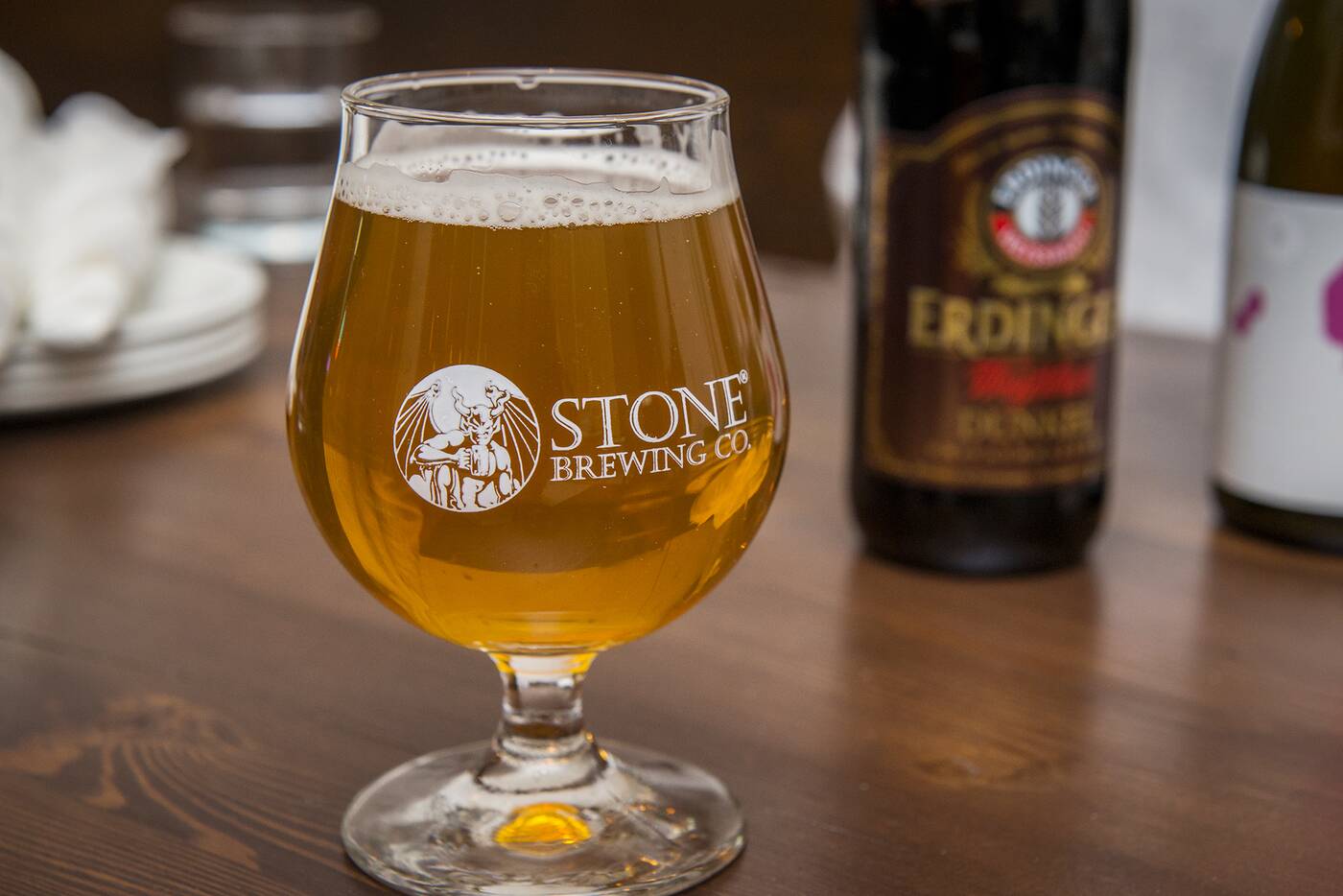 The BrewDog Punk IPA ($8) comes from a nerdy experimental Scottish brewery, and it makes a great start, good on its own or with food. It’s fragrant, mildly funky and full-bodied. 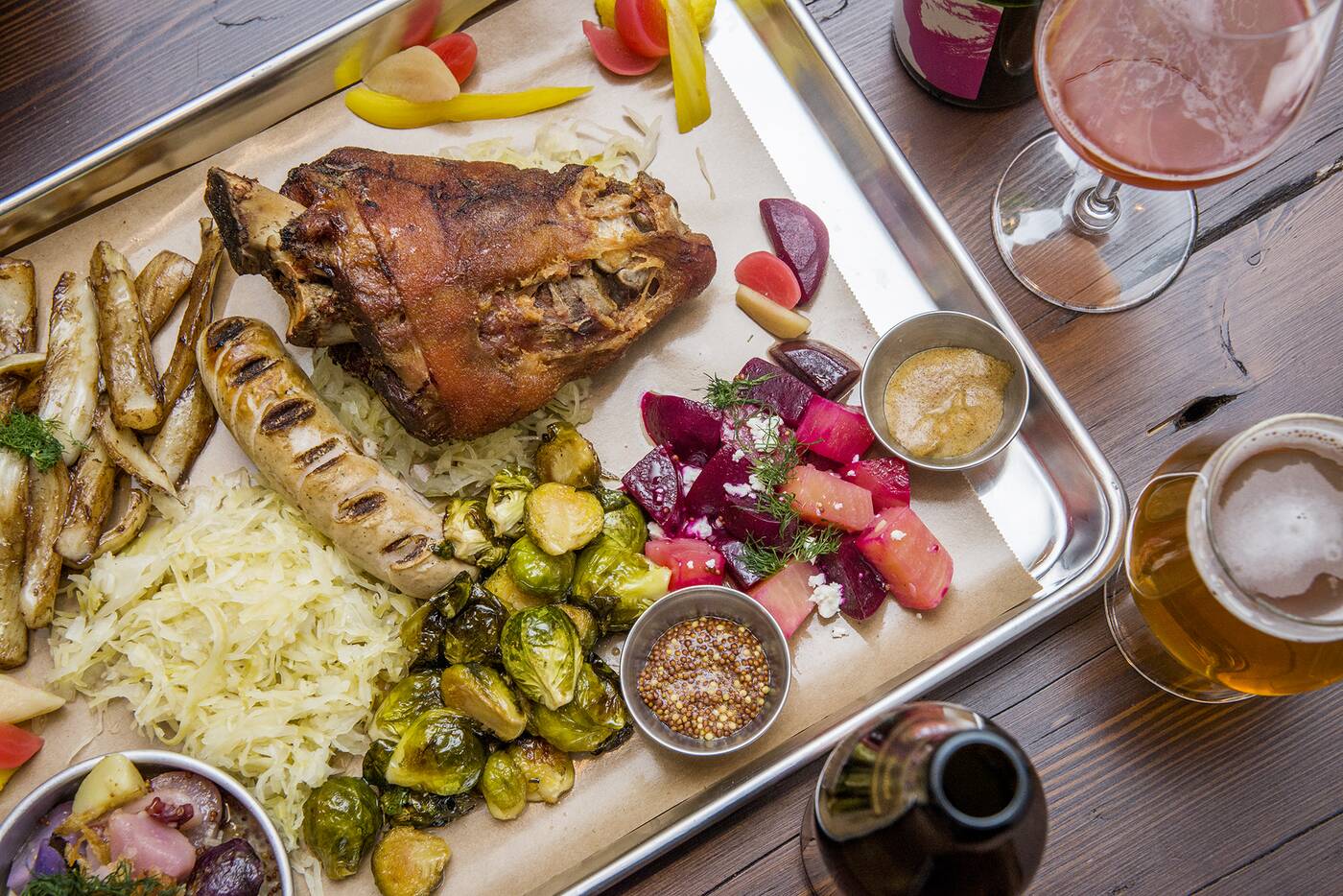 The monstrous Bavaria platter ($55) is found in a section of the menu literally marked “Feasts.” Obviously it’s for sharing, piled with schwienshaxe, weisswurst, potato and beet salad, sauerkraut, brussels sprouts and two mustards. 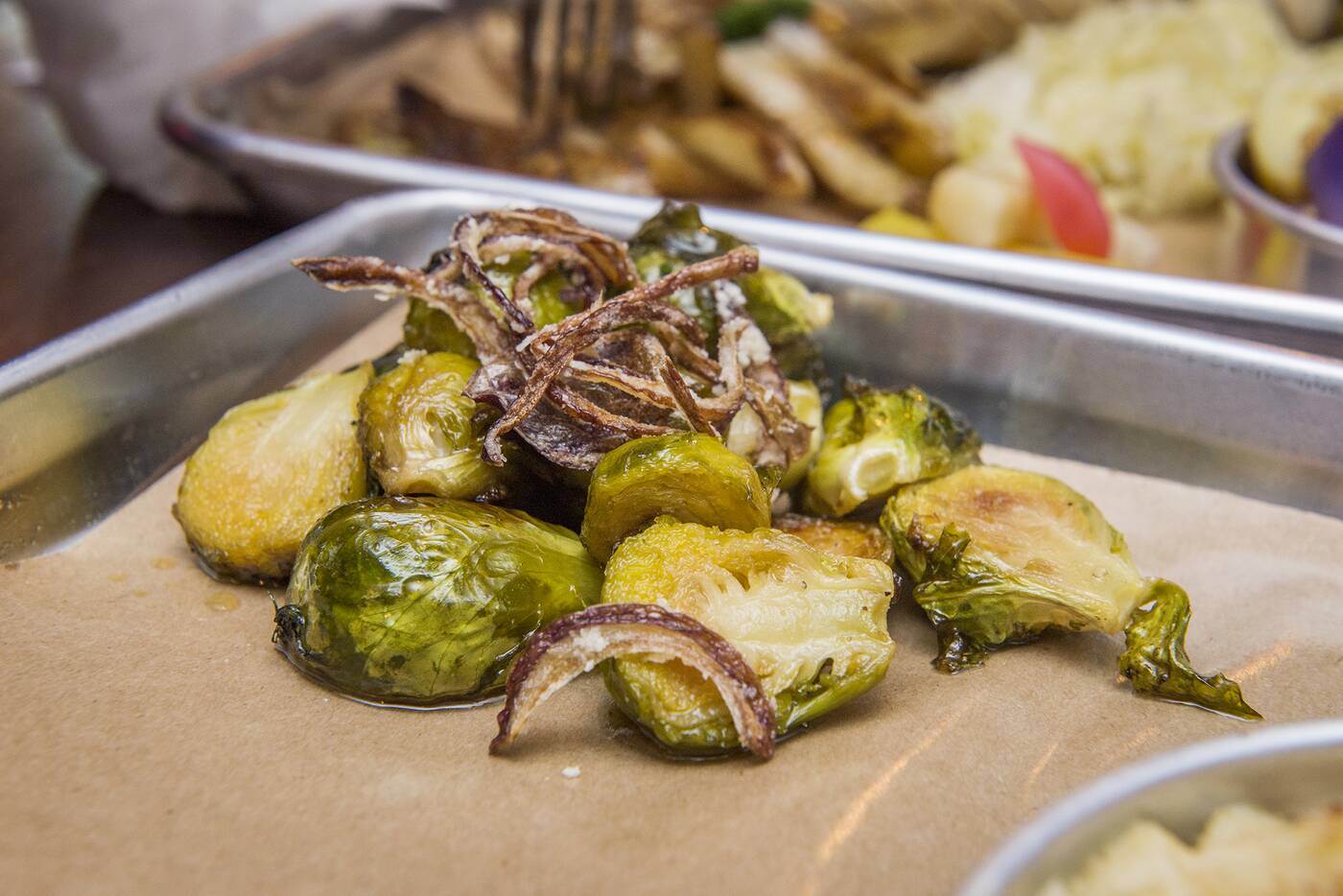 The brussels sprouts ($4.50) are a unanimous favourite, sweet, oily and crunchy. 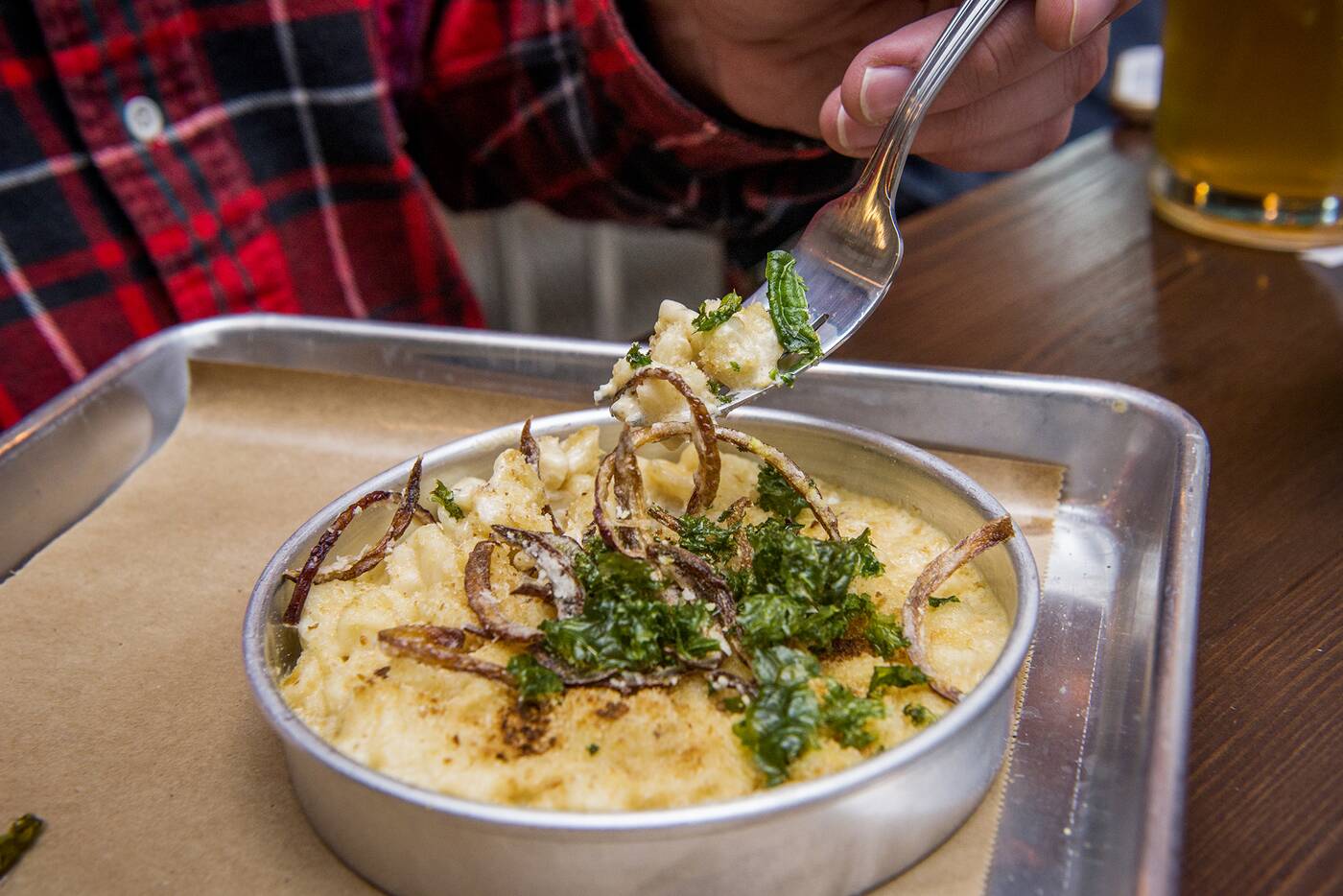 Order spatz and cheese ($8) as a side, a sort of nod to mac that would normally be a side on a BBQ menu, but made with traditional egg noodles, tied together with crispy shallots. 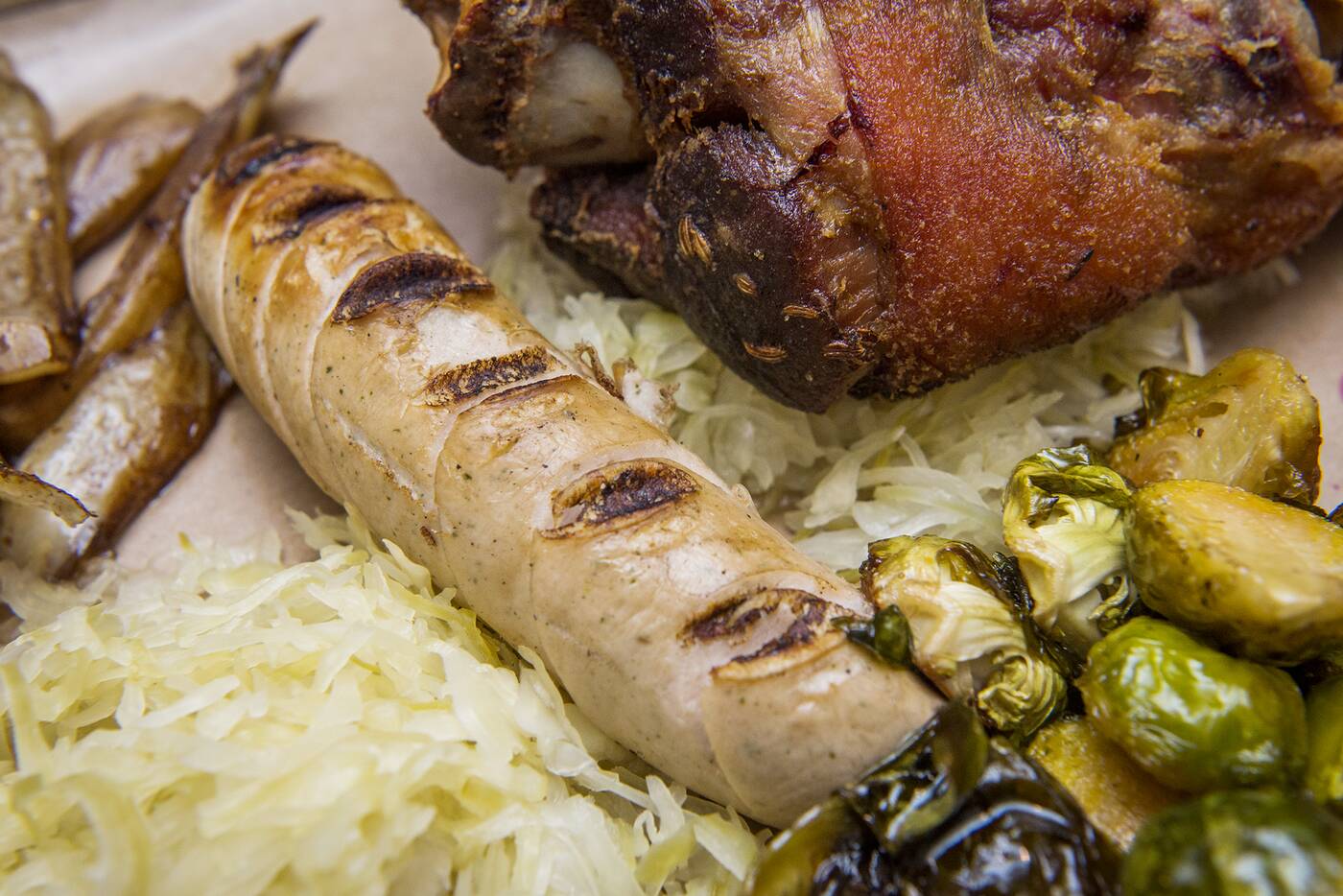 The weisswurst sausage is really good, that smooth, tender and juicy thing that a sausage should be, dense without being too heavy. 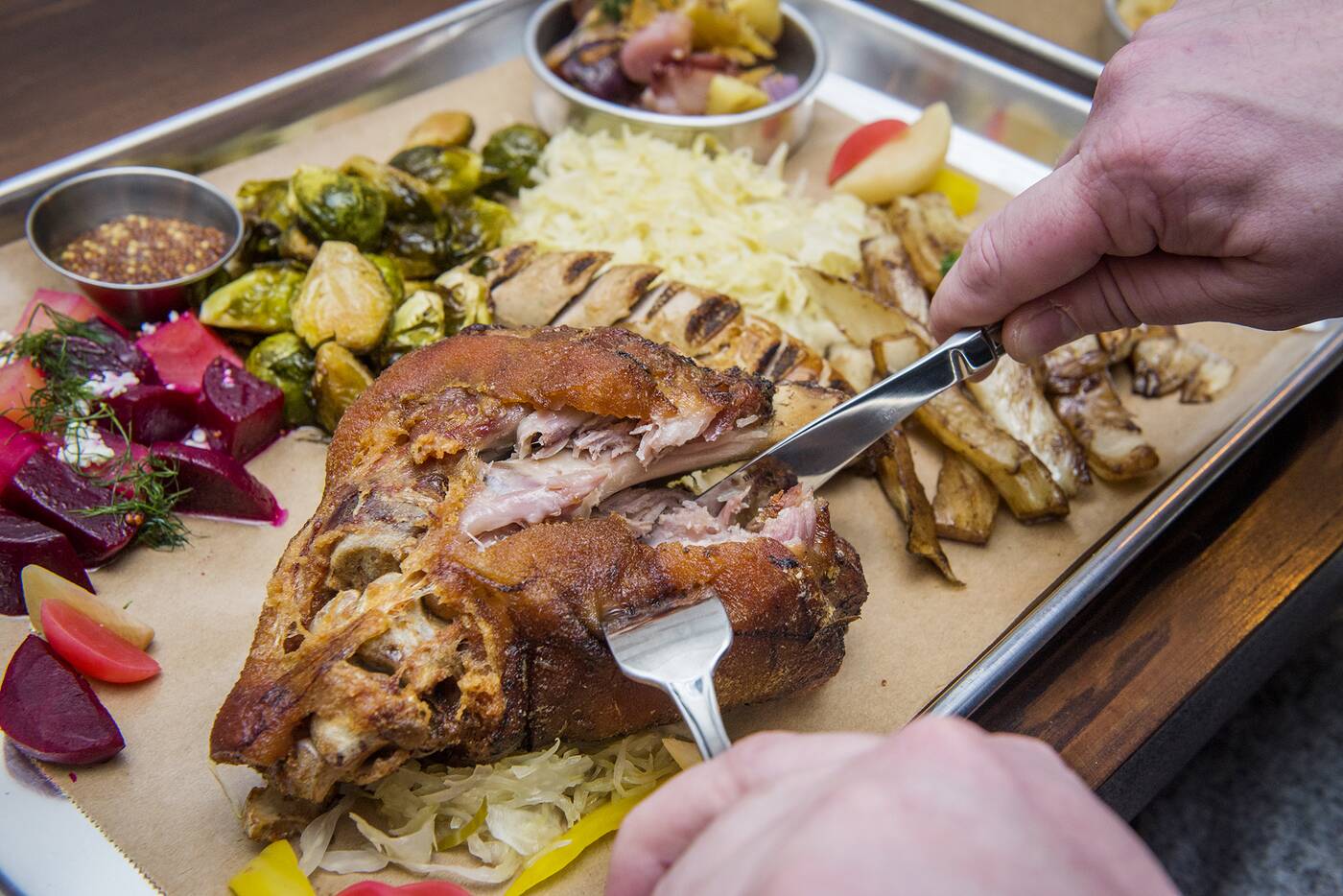 Schweinshaxe is basically just German for ham hock, the lower portion of a pig’s leg. The meat is tender and delicious and goes really well with the mustards, and the skin is stretchy, crispy and indulgent. 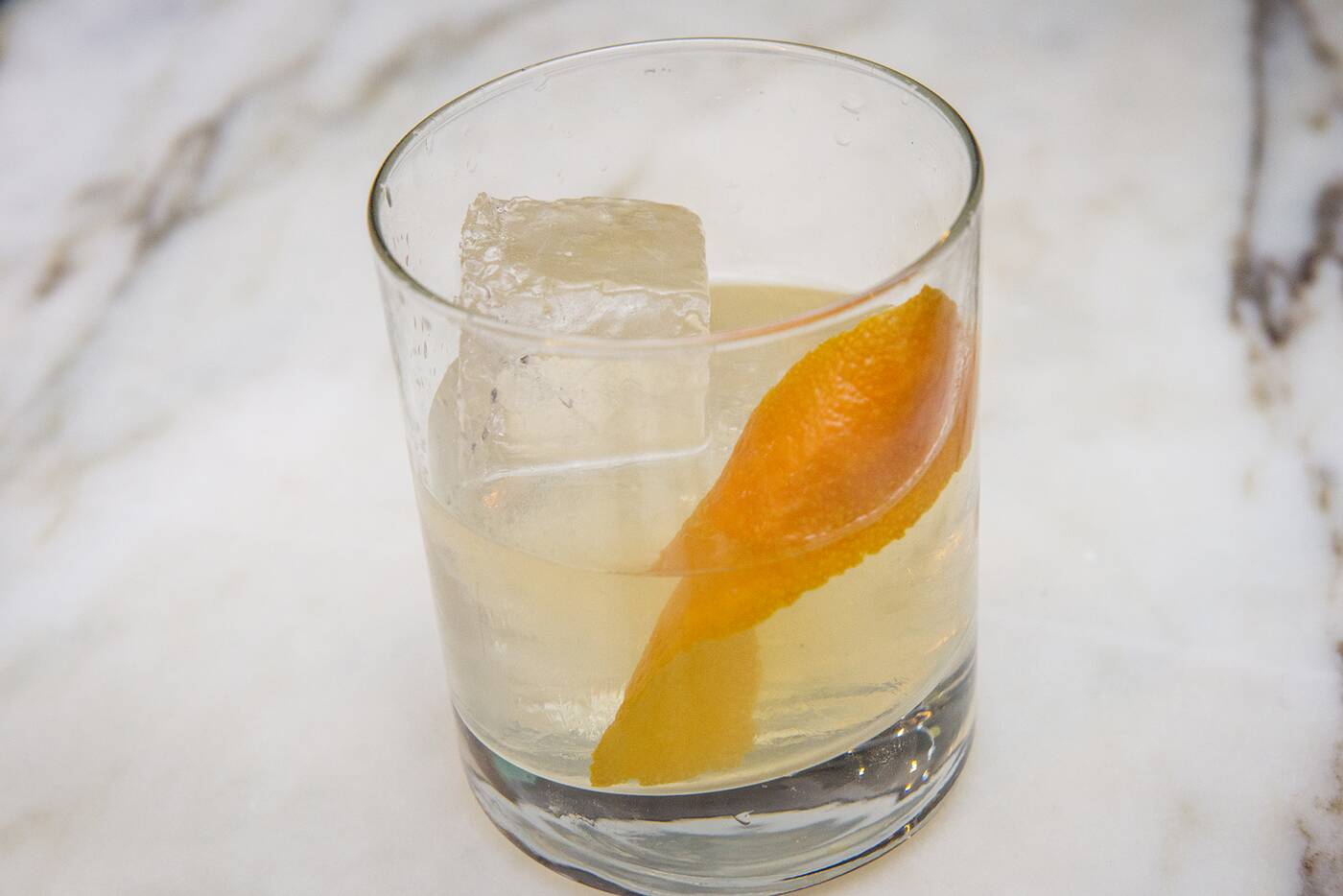 You can get your cocktail on at this industrial beer hall too with offerings like the Chunnel Vision ($11) named for its French and English ingredients, an orange bomb made with Cointreau, Grand Marnier, orange bitters, orange zest, and London dry gin. 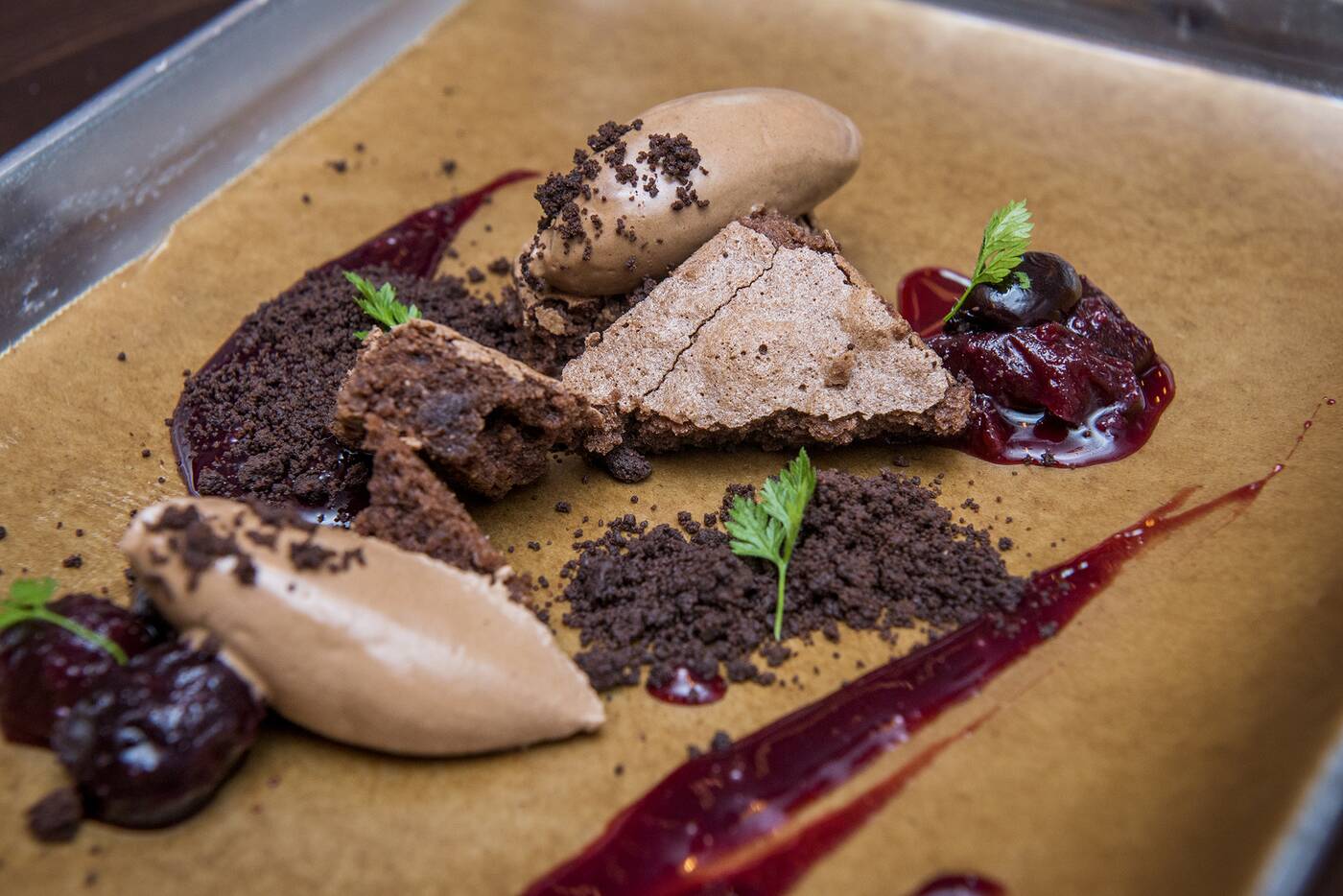 Don’t skip dessert after your feast - order their play on black forest cake in the form of a dacquoise ($7) made with luscious chocolate whipped cream and juicy sour cherries. 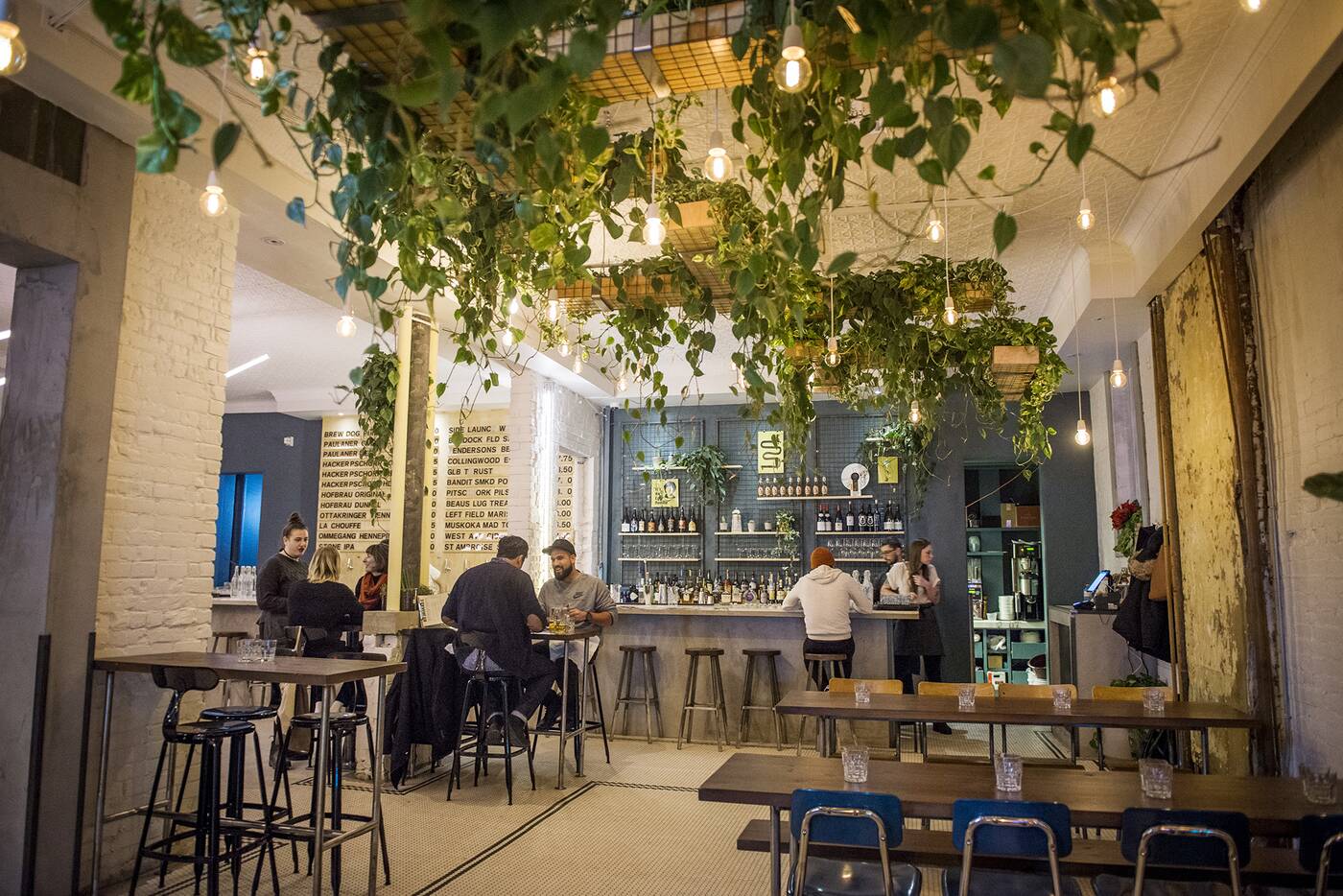 It’s a spacious, well-lit breath of fresh air on West Queen West, where the only options are often cramped, dark, and clubby. Lots of big tables including a long communal one in the centre are perfect for giant groups.

If you’ve been to Otto’s Berlin Doner before, you can expect the same bathroom disco experience here at the Bierhalle. 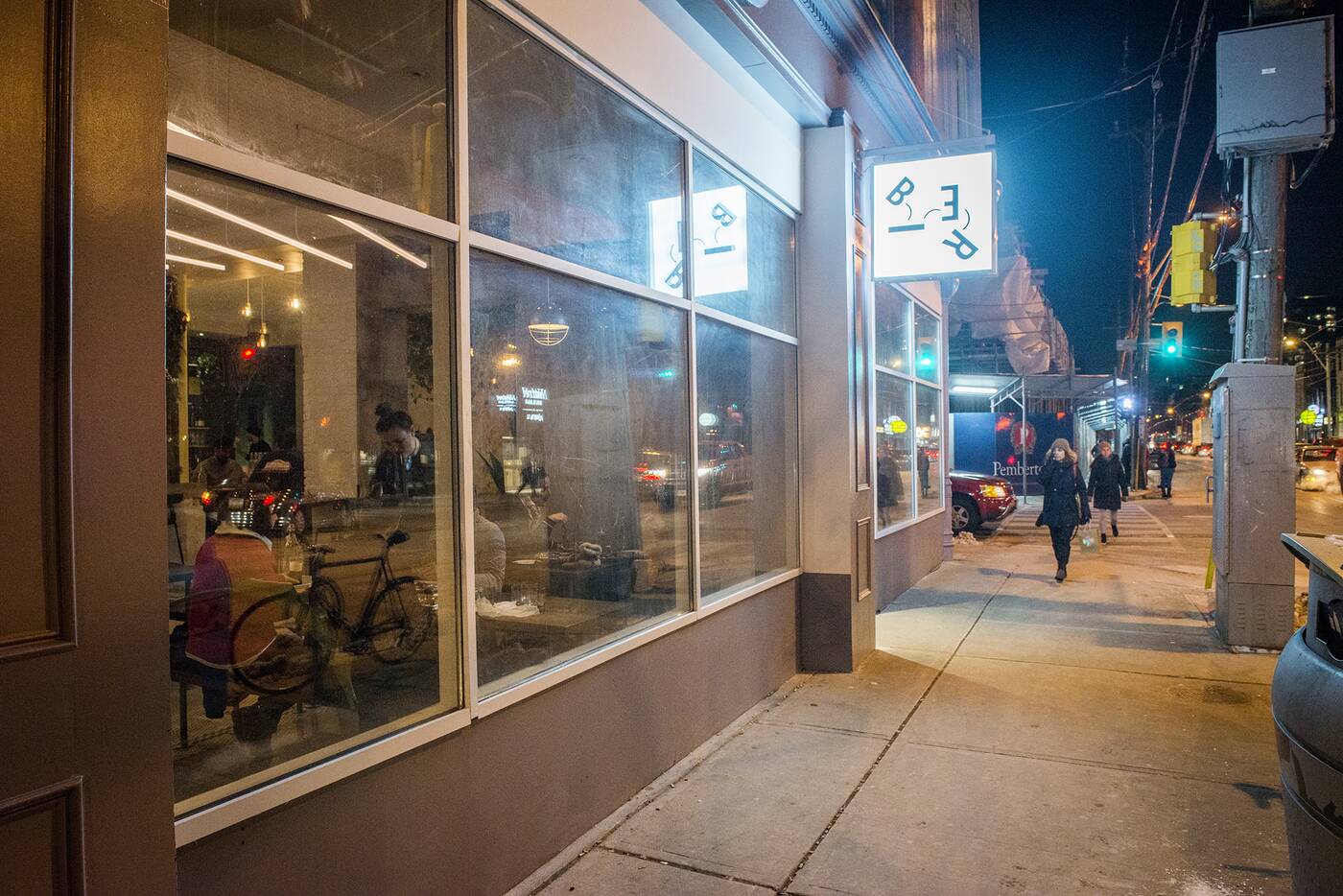 The Best New Restaurants in Toronto for 2016

The Best Schnitzel in Toronto