The Ossington Stop serves up traditional Russian cuisine, along with a drink menu consisting of Eastern European alcohol.

The bar/restaurant opened up a new location at Dundas Street West and Sheridan Avenue, this past August, after closing up the old bar, which sat at Dundas and Ossington, since 2014. 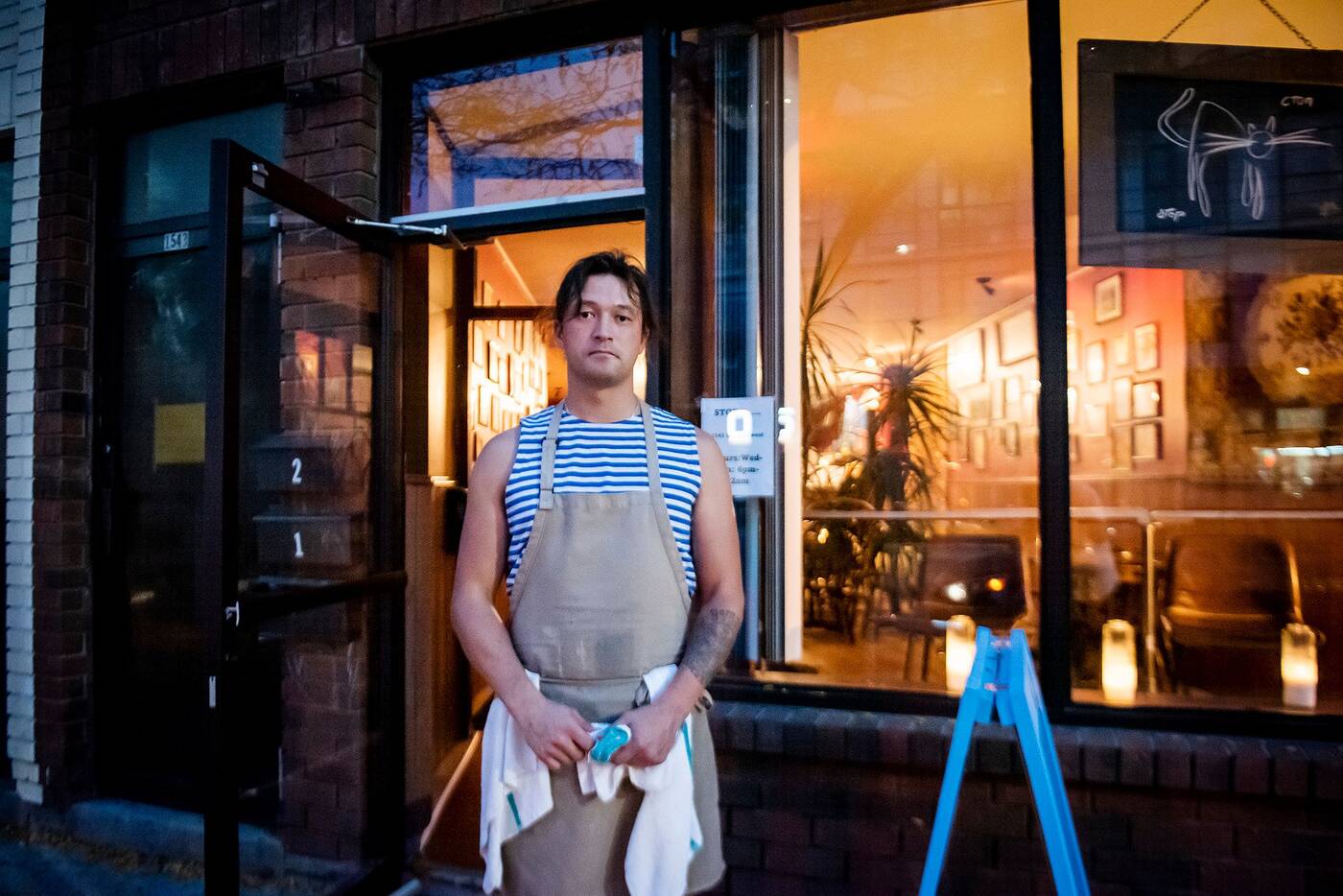 Back then, the bar was just a regular pub, and current owner Denis Ganshonkov was one of the only employees working in front of house.

Ganshonkov was a host, server and bartender all in one and even did some of the work in the kitchen. In 2017, he was looking to invest even more in the bar, when he was given the opportunity to buy into the establishment. 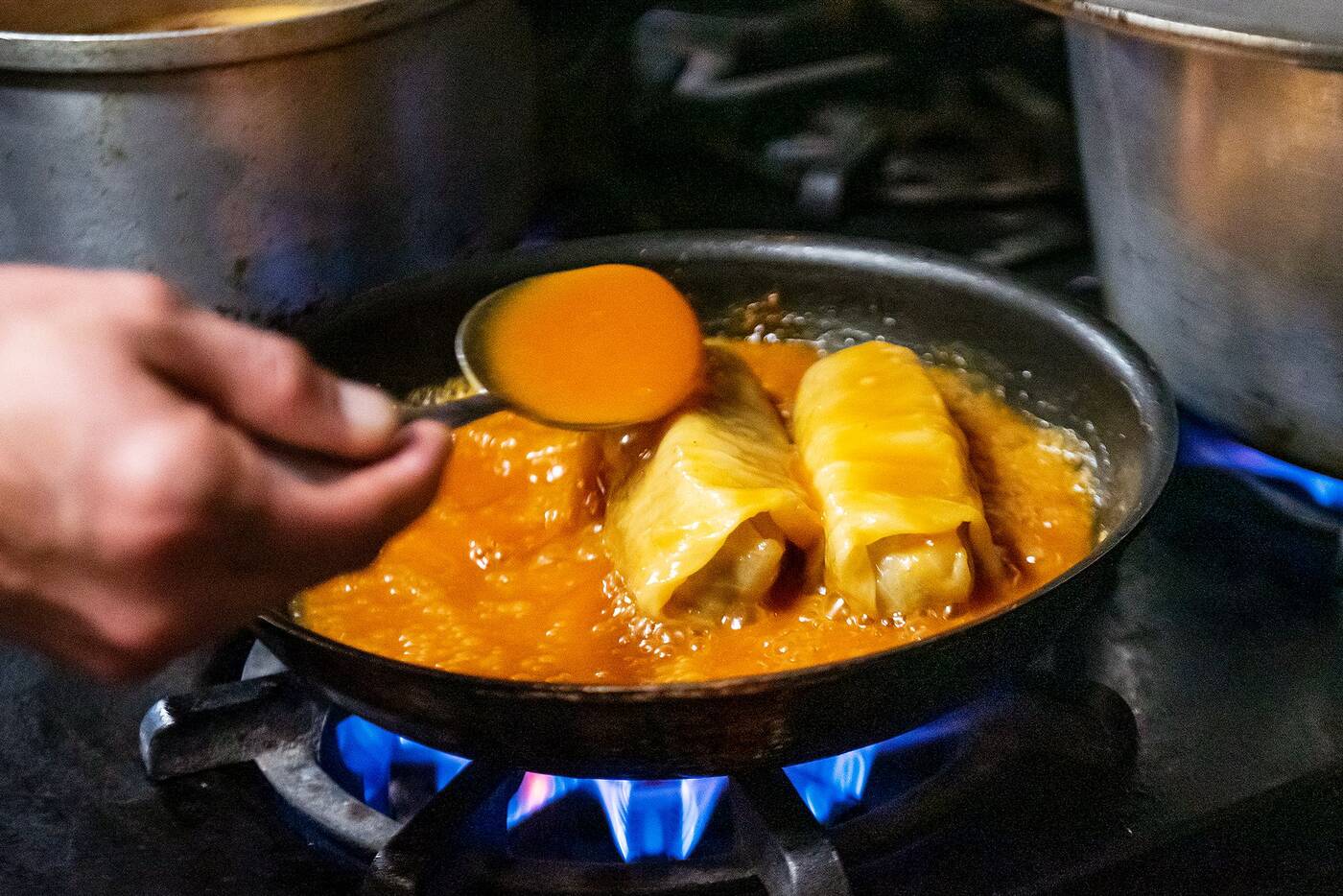 One of his first decisions as part owner, was to scrap the regular pub food menu, which can be found at any other standard bar, and introduce dishes from his home country of Russia.

It was his first time owning a bar/restaurant so Ganshonkov says he wanted to bring in something he was already familiar with. For him, that's cooking Russian food, exactly how it's made in grandma's kitchen back home. 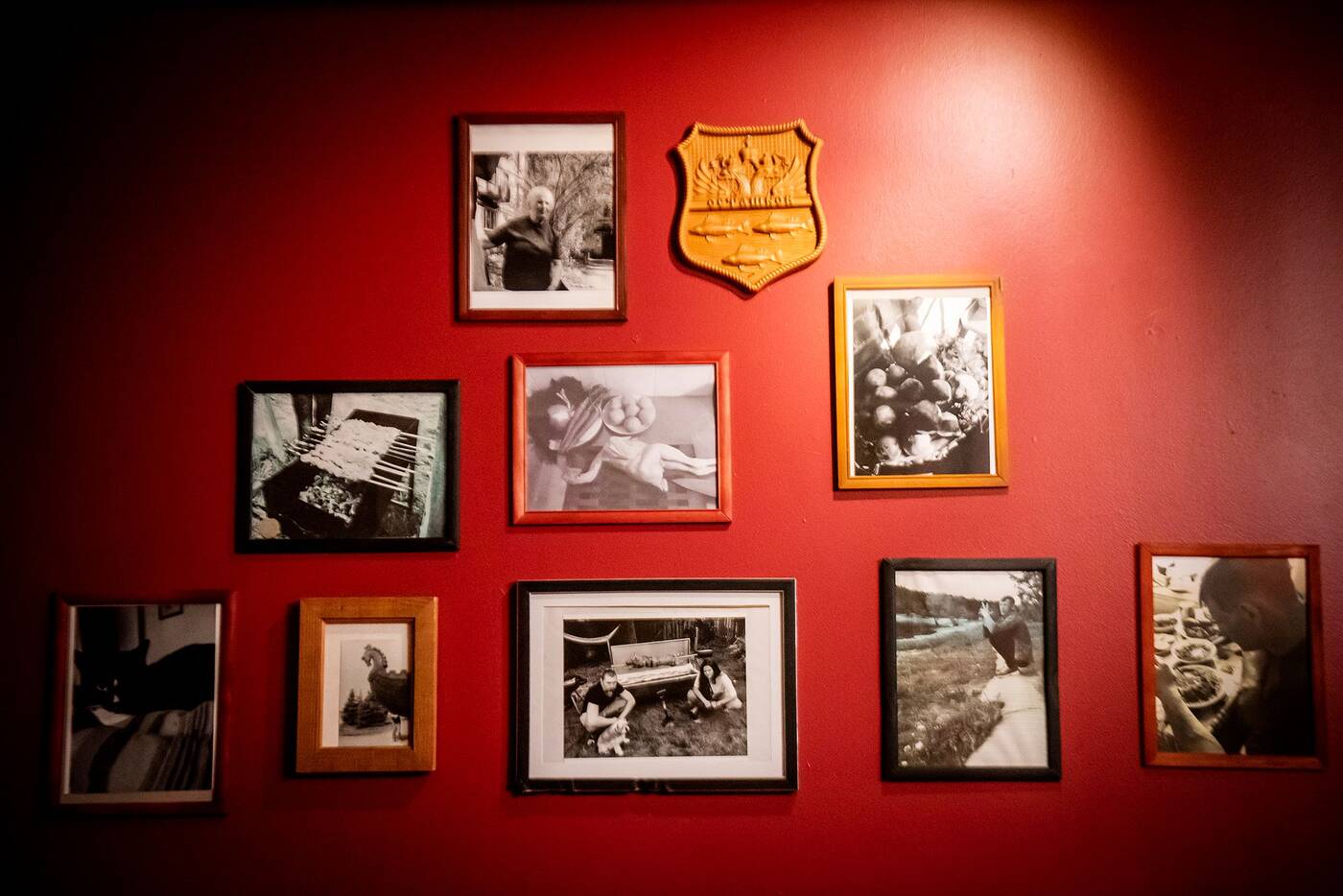 The recent move to a new space for the bar happened for a number of reasons, including problems with the exhaust fan system, which left Ganshonkov with the ultimatum of losing the kitchen or ditching the lease.

On top of that, Ganshonkov says he felt the old space was too small, and he wanted to start somewhere fresh, which prompted the move down the street. 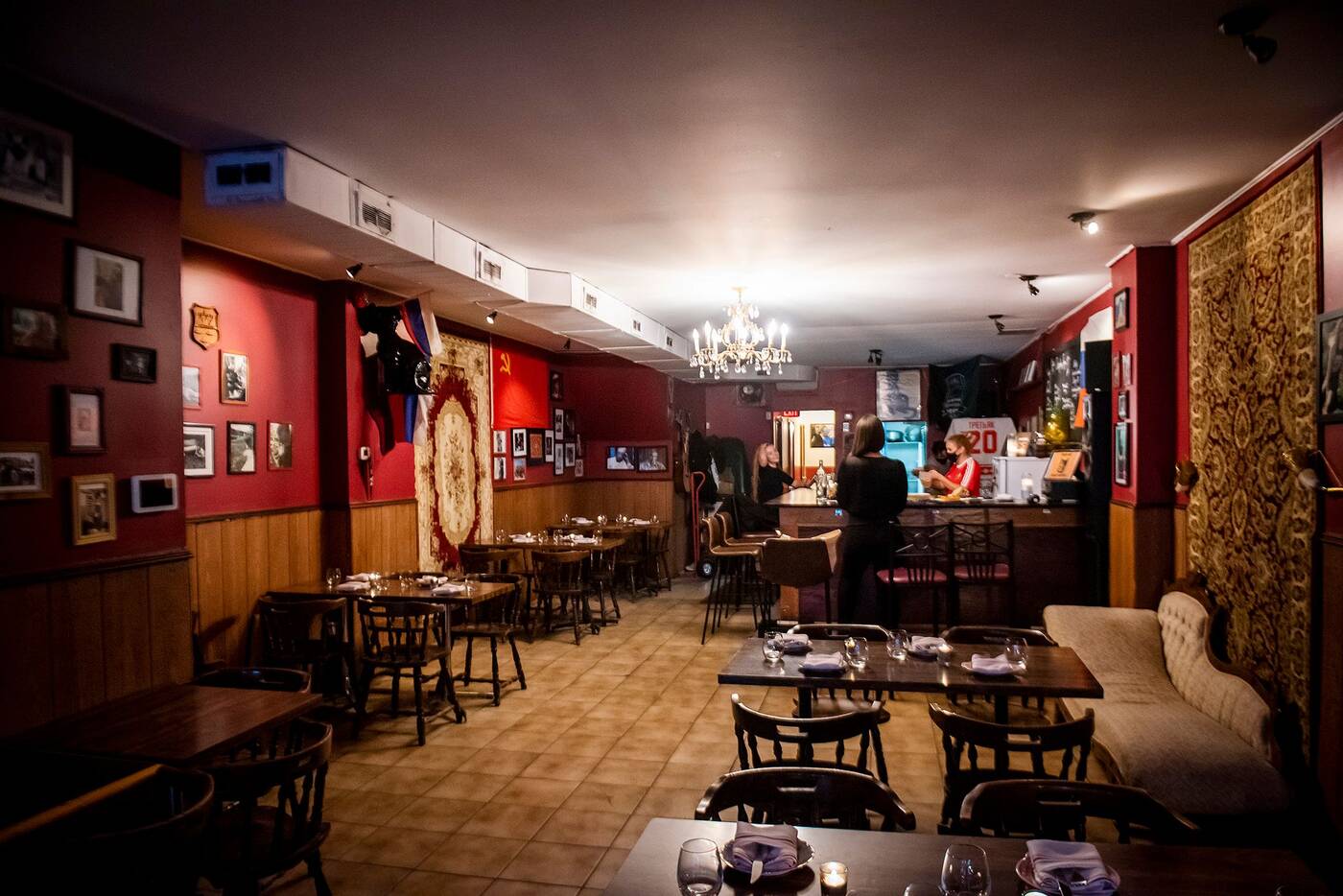 Ossington Stop has a dark interior, the red coloured walls, and Russian folk music playing in the background, transports you to another time and place. 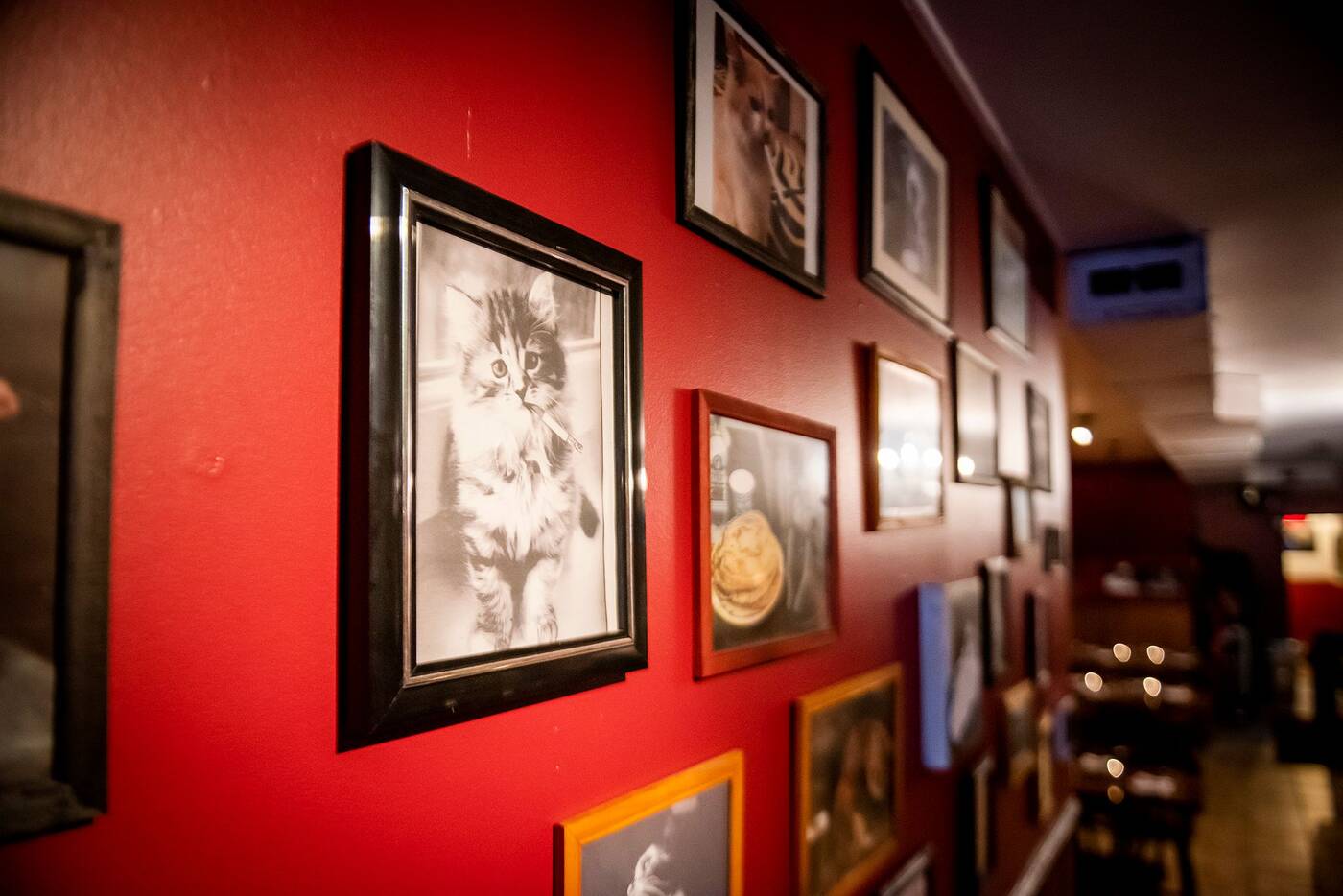 The walls of Ossington Stop have their own character, they're covered in different images of cats smoking cigarettes and drinking, along with a series of old-school Russian musicians and actors. 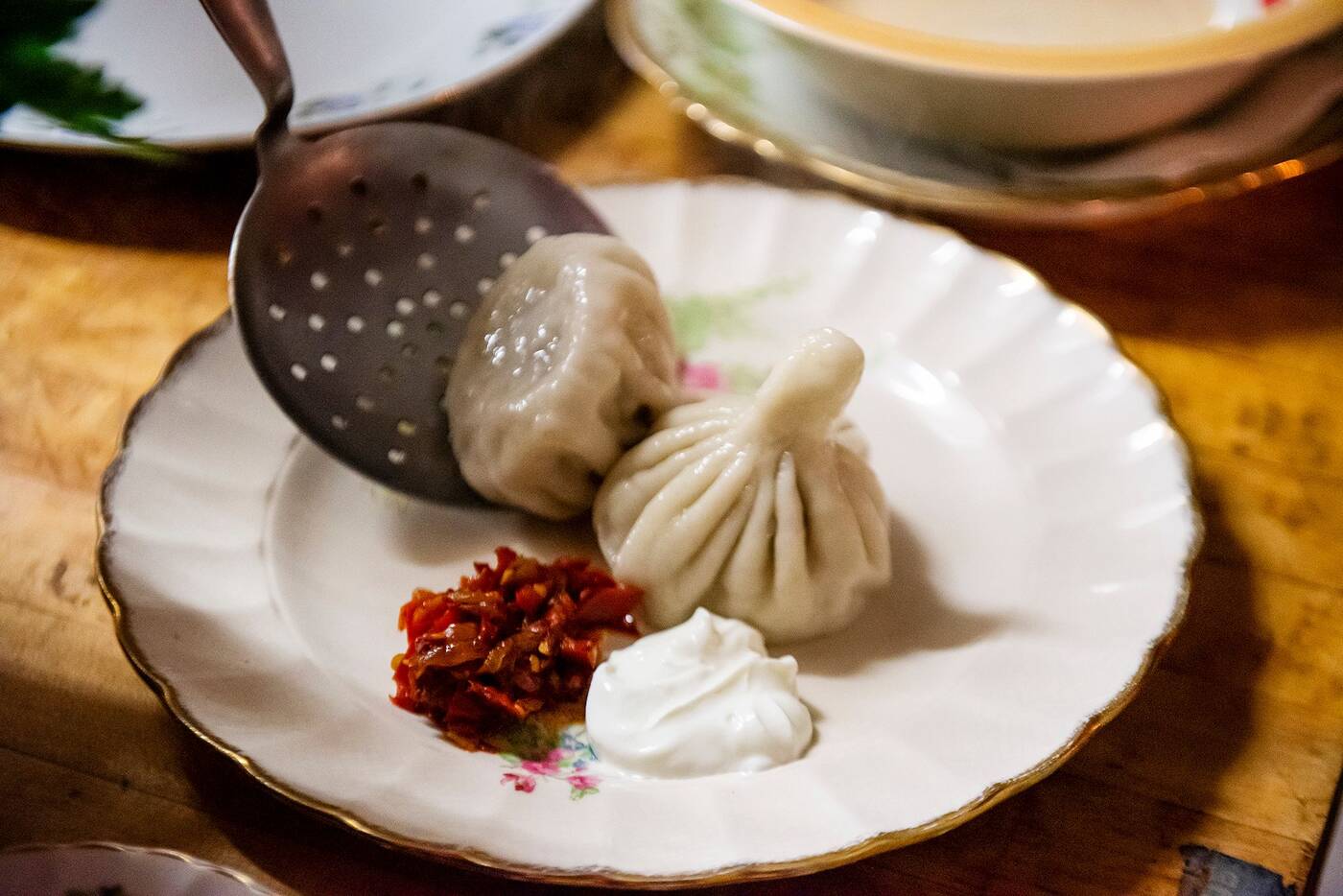 The Khinkali Dumplings ($3.25 each) often run out at Ossington Stop, because they're so popular. The dish originates from the country of Georgia, they're hand-rolled and boiled upon ordering. 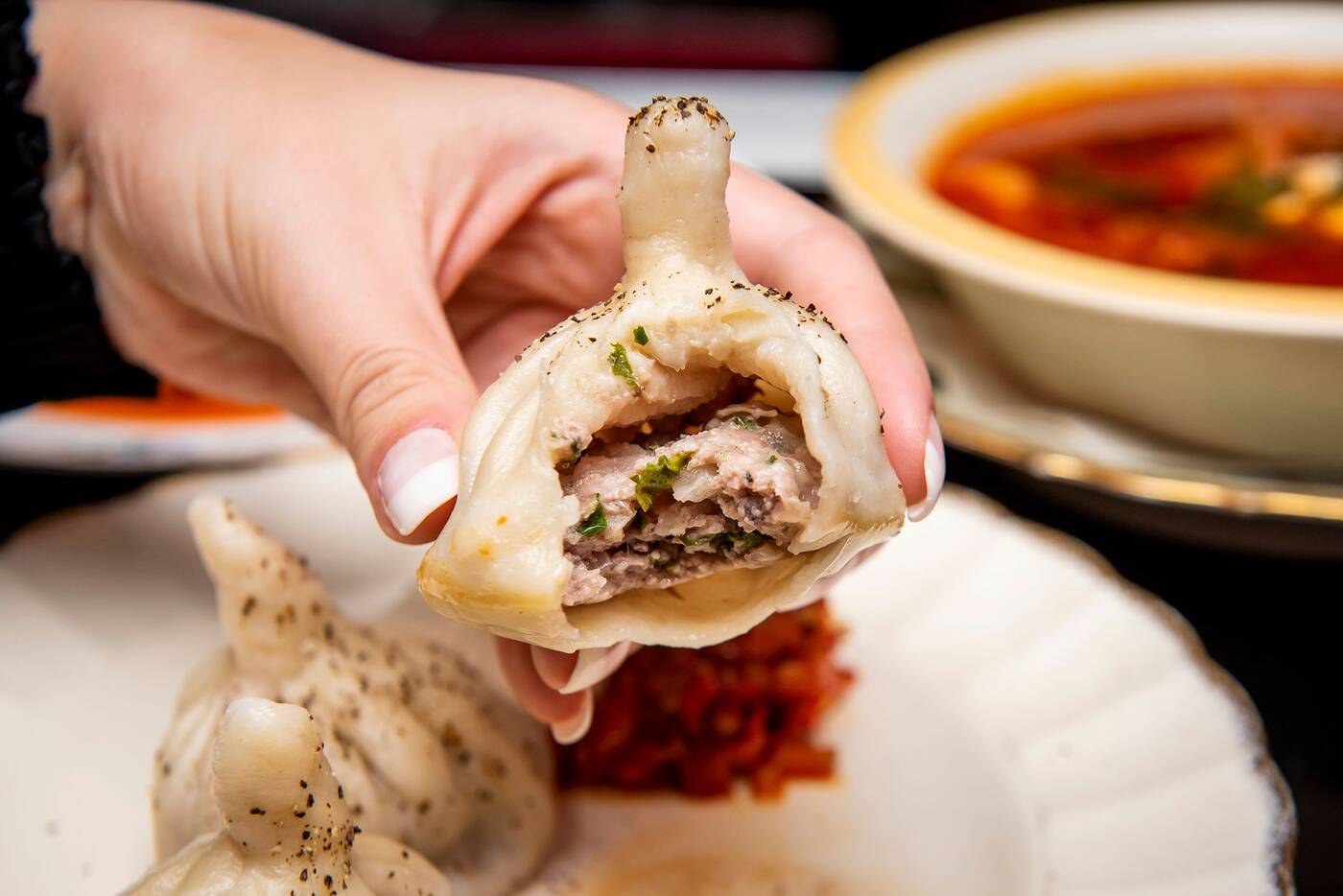 A blend of beef and pork is used for the filling, along with onions and cilantro, some pepper is dashed on top of each one. This dish is served with a dollop of sour cream and red pepper relish, made in-house. 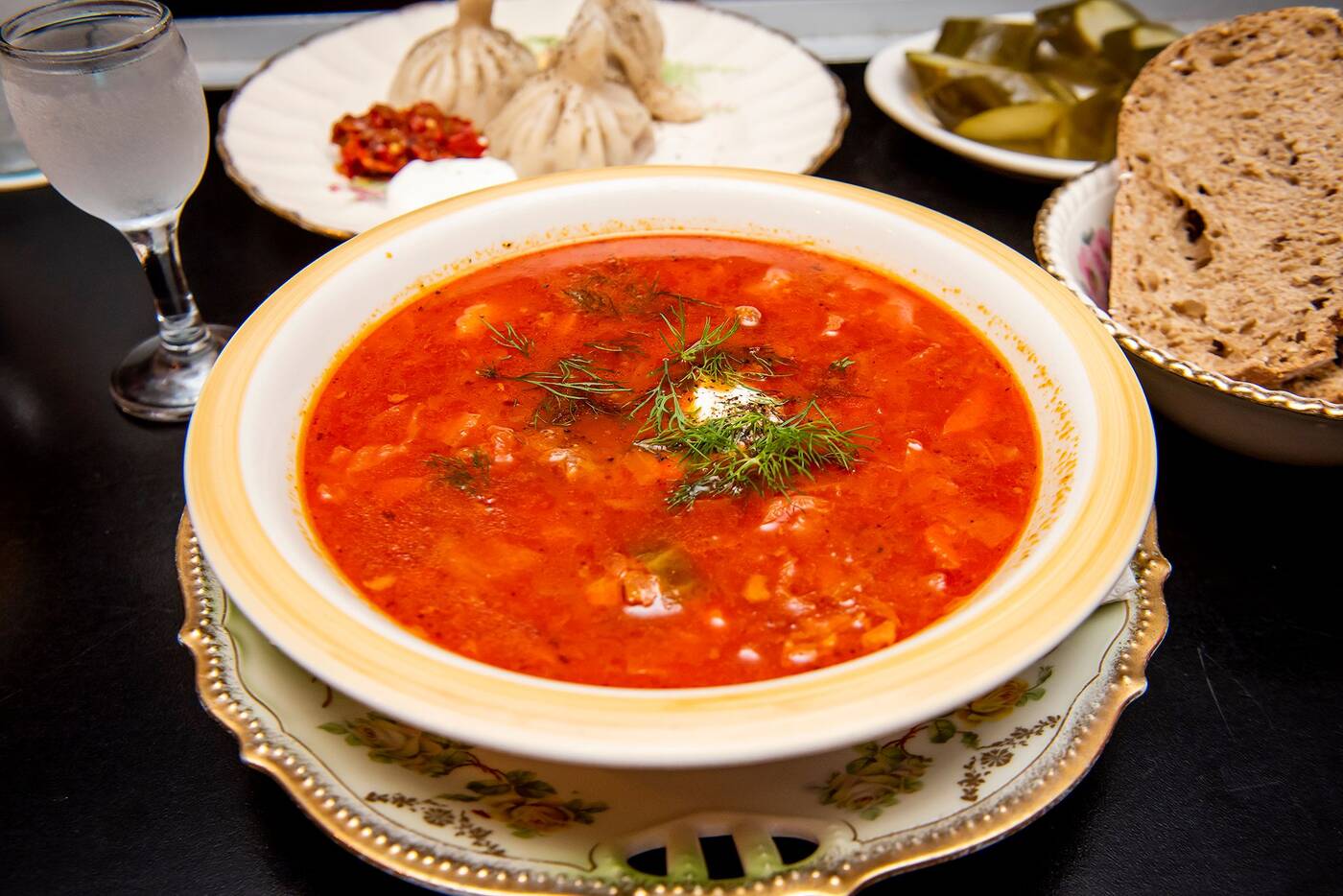 Borsch ($12.00) is a Russian/Ukranian soup made from a base of beef stock, beets are added to the mix which gives the dish its deep red colour and rich flavour. 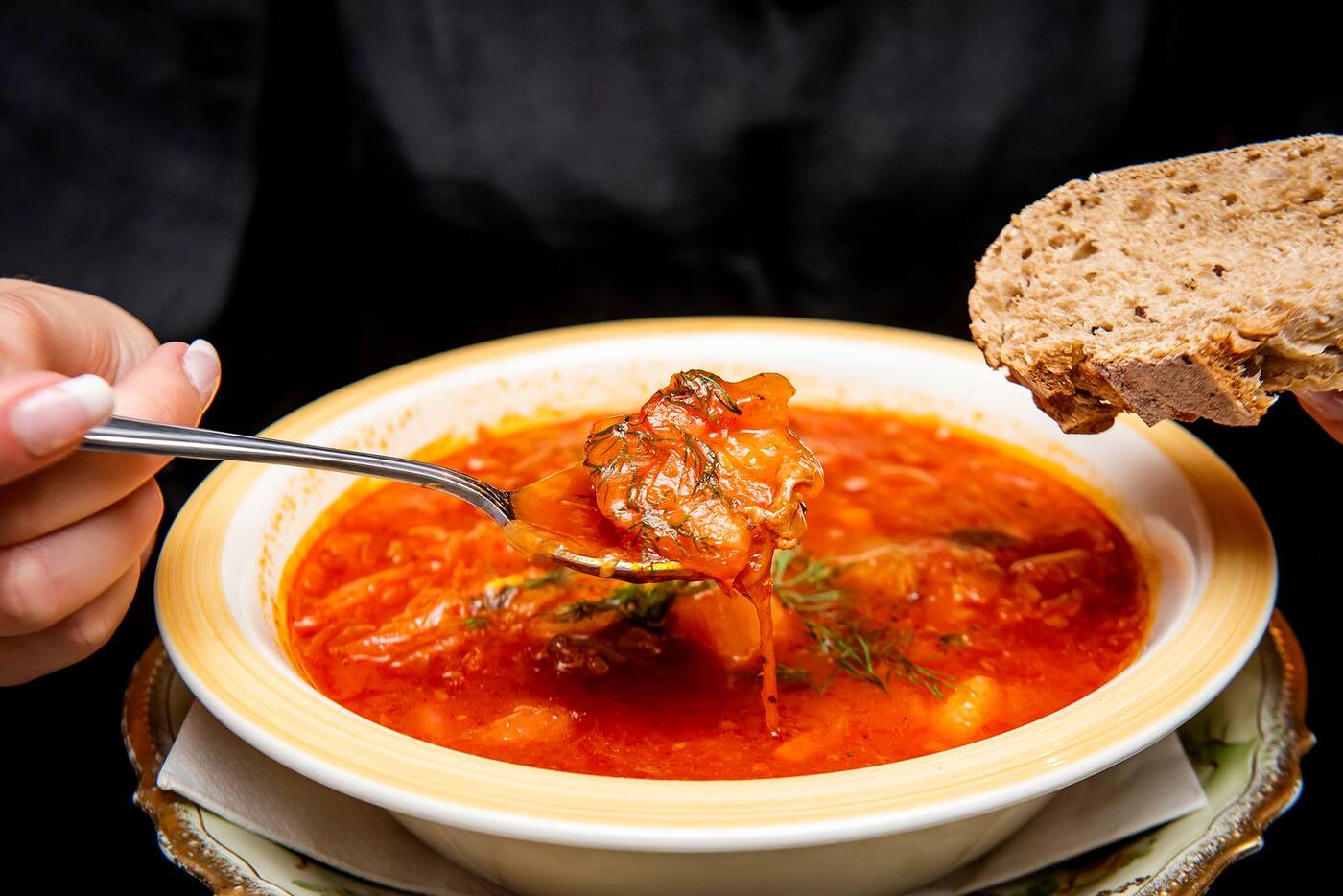 Potatoes, carrots, bits of cabbage, and a touch of tomato paste are boiled together with it. The dish is garnished with sour cream and fresh dill, served with a side of bread. 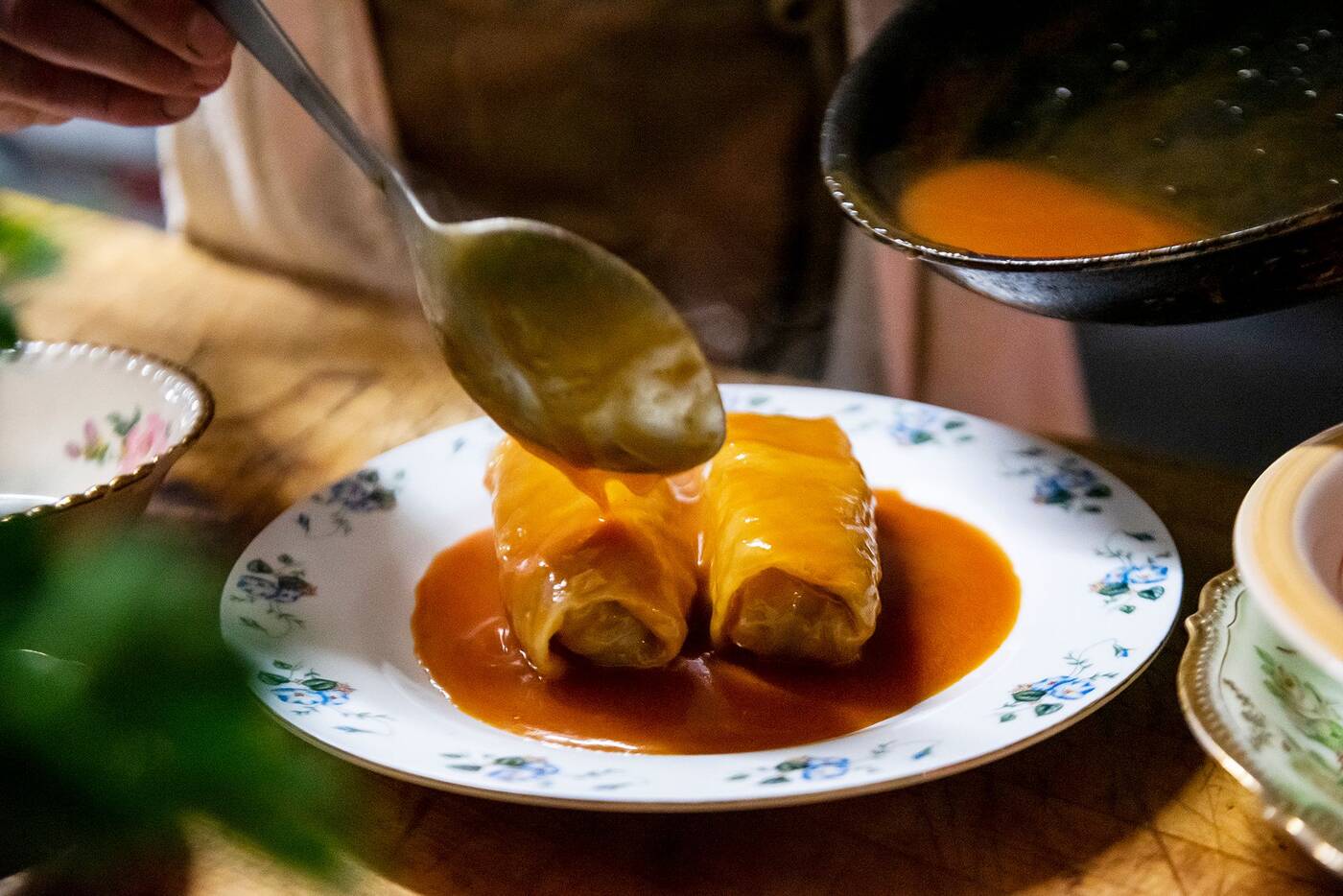 Cabbage Rolls ($16.00) are a staple for many different Eastern European get-togethers. The rolls are filled with a beef and pork mixture and then wrapped in cabbage, before being baked inside the oven. 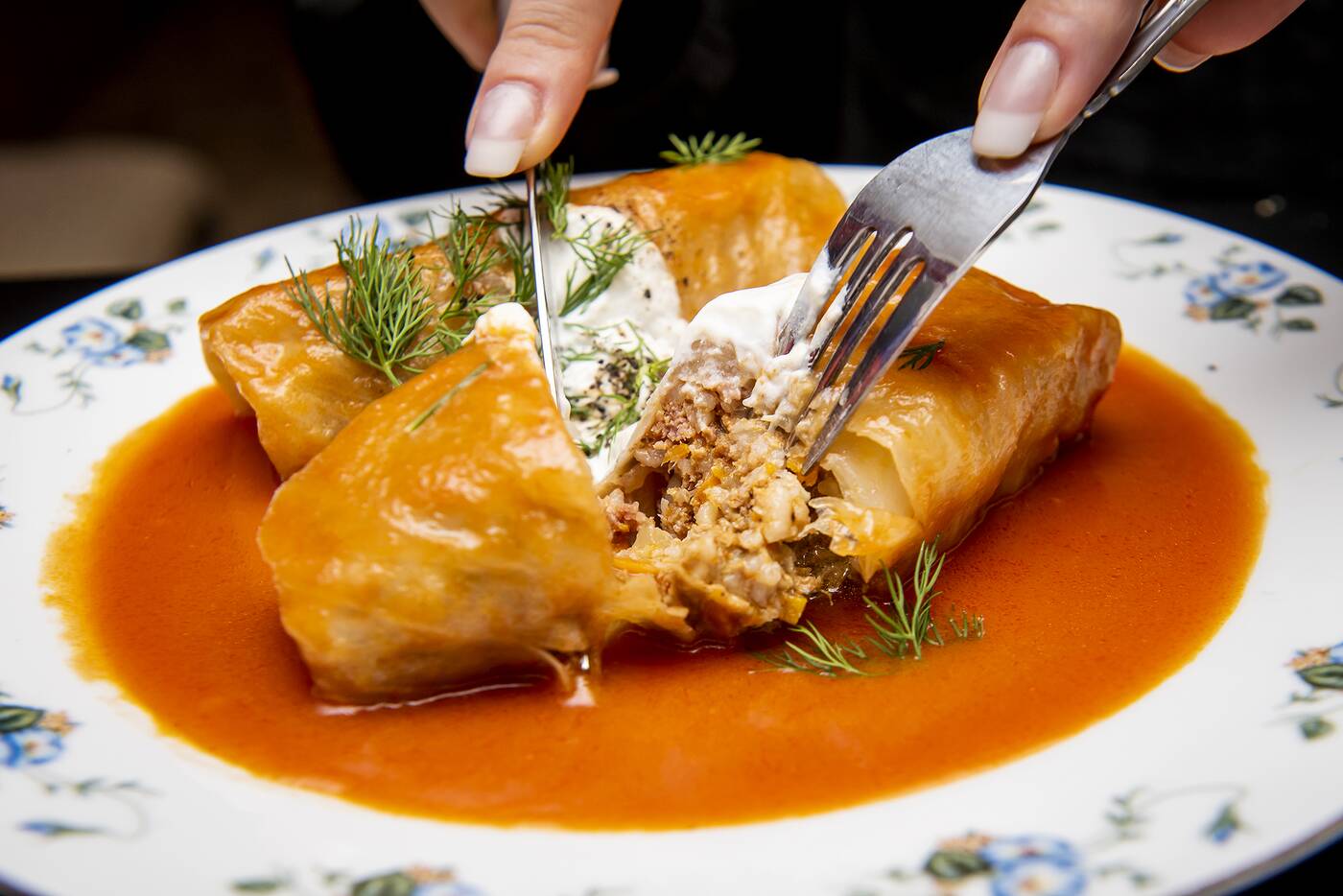 After baking, the rolls sit for about a day in a pan with beef stock, so they stay intact and marinate for extra flavour. They're then pan-fried with a gravy-like sauce, made of tomato paste, flour and more beef stock. The sour cream put on top adds to the heartiness of this meal. 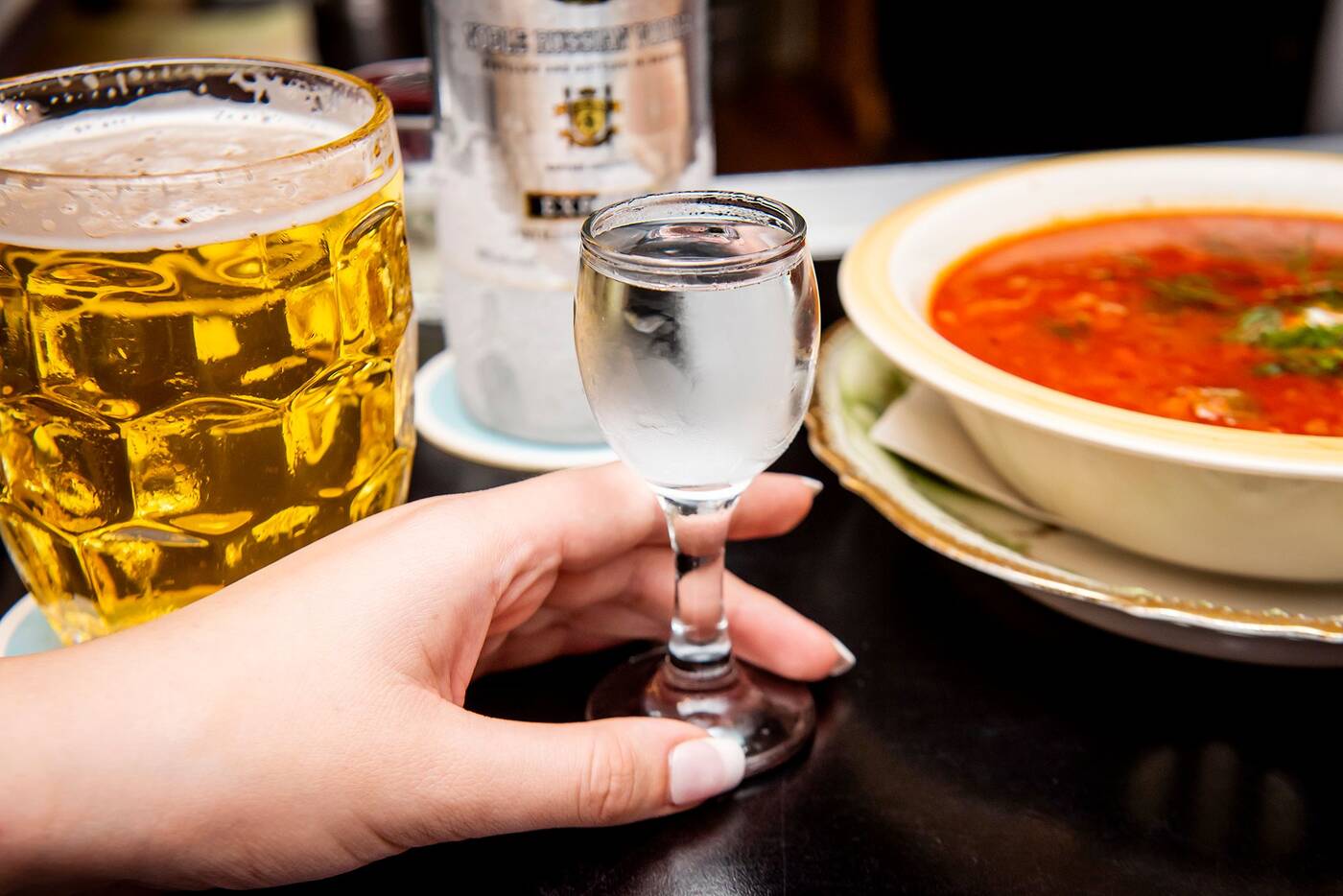 A shot of Beluga Vodka ($15) is standard at this Russian Bar, being poured in a bit of a larger shot glass, than what you'd find anywhere else. The brand is known as luxury vodka, and if it makes an appearance at a party in Russia, you know the host has good taste. 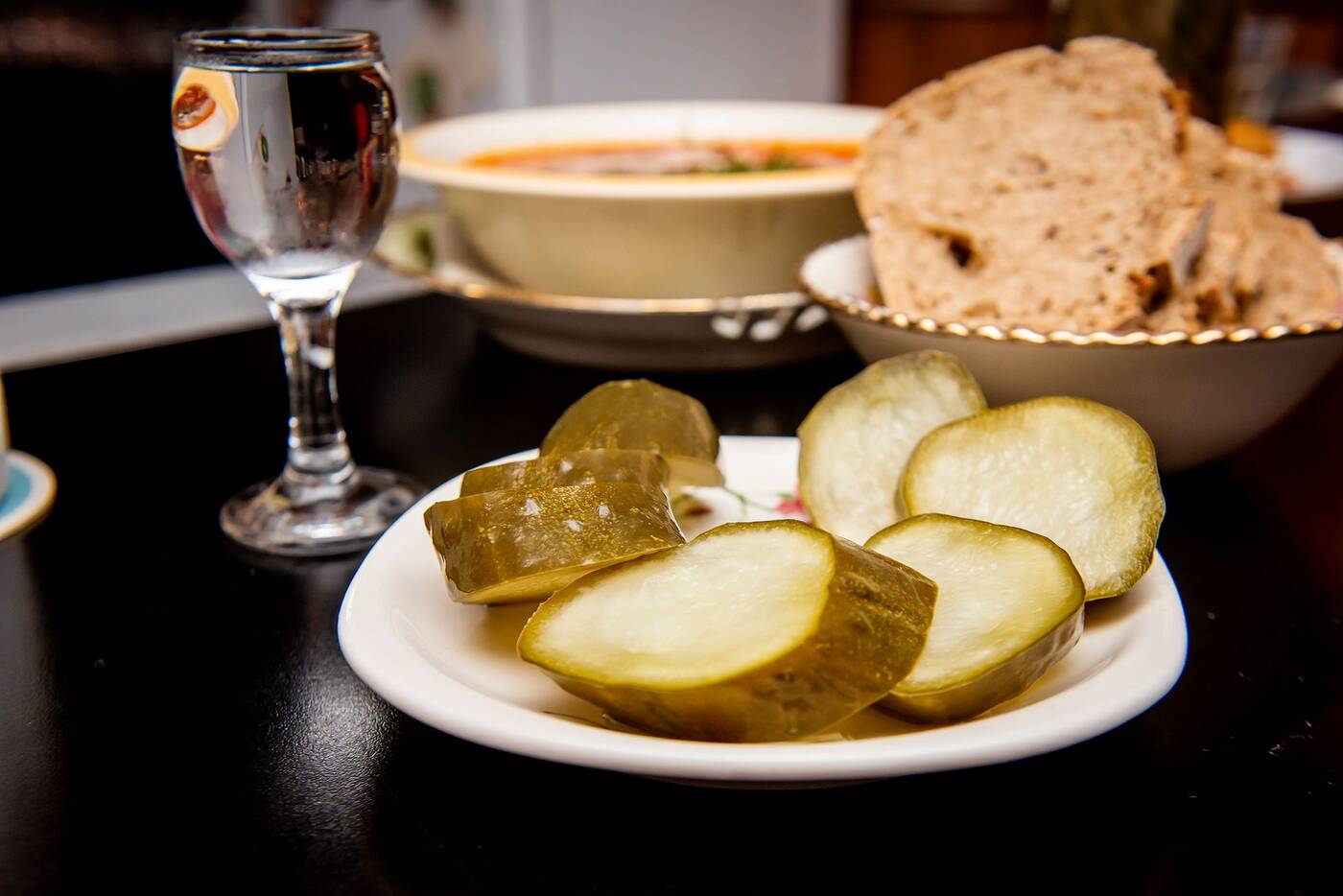 It's smooth going down, but incredibly strong, so these shots are not for the weak. However, if you ask the bartender, they will happily offer you some pickles to stabilize the taste of alcohol, a Russian tradition. 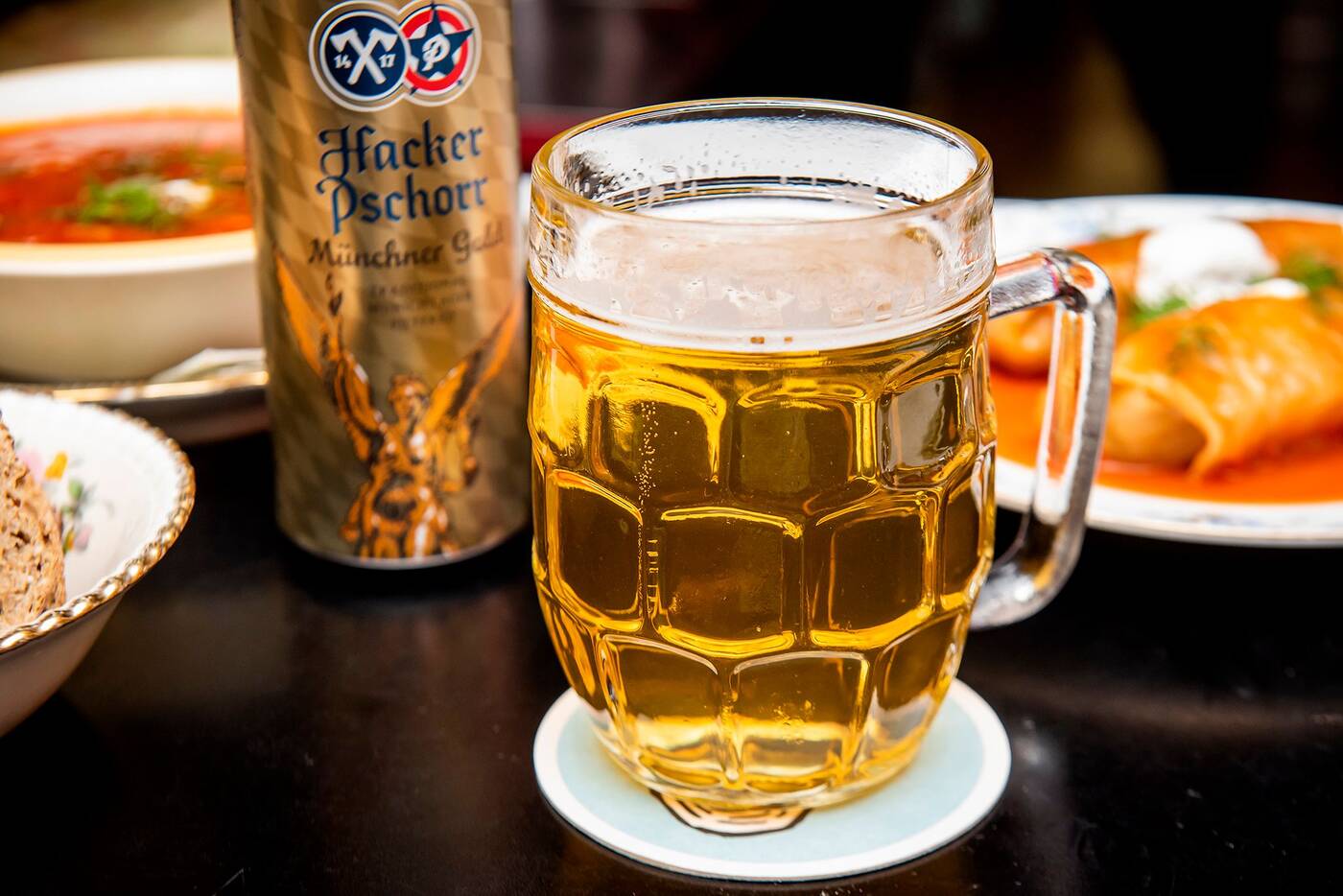 Hacker-Pschorr Munich ($8/can) is a gold lager from Germany, it has a pungent taste, but pairs really well with the cabbage rolls. I'd suggest this even for people who normally stray away from beer, as there isn't too much hoppiness to complain about. 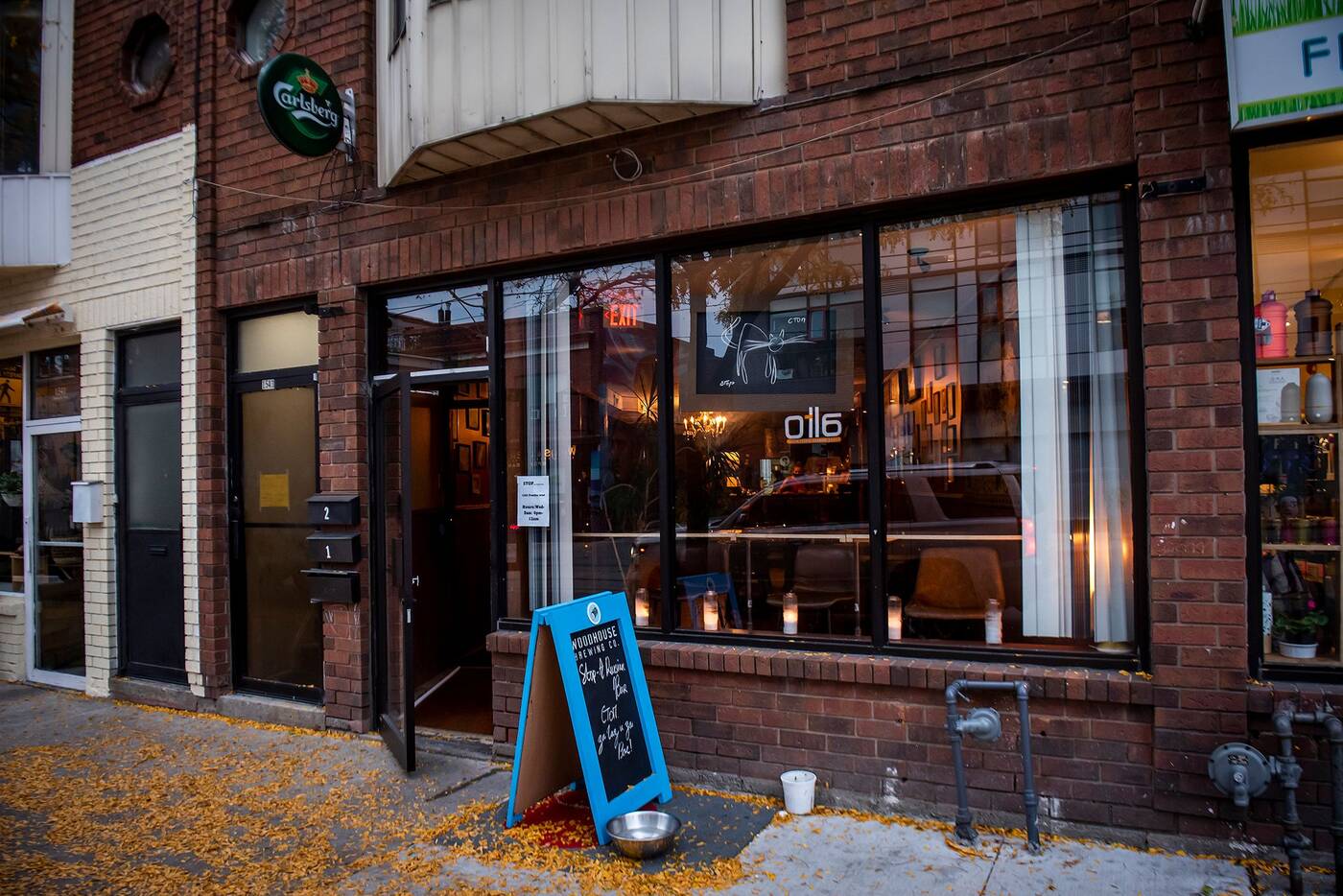 It may be difficult to see Ossington Stop passing by on the street, but keep an eye out for the black and white cartoon-drawn cat sign that hangs on the front window, and you'll know it's the spot.