Micro Time Cafe may look pretty generic all around, but the food here is actually better than average. Located across from the TTC station at Yonge & Wellesley , this spacious second-floor spot with a capacity of 80 - plus a 30-person front patio in warm weather - used to be Spice Village and before that, Biryani House , both Indian buffet restaurants.

Images of stars from classic black-and-white Hollywood movies (think Humphrey Bogart and Ingrid Bergman in Casablanca ) are up on the walls, contrasting with the modern flat screens and tablets found at some of the banquettes and booths in the split-level space. 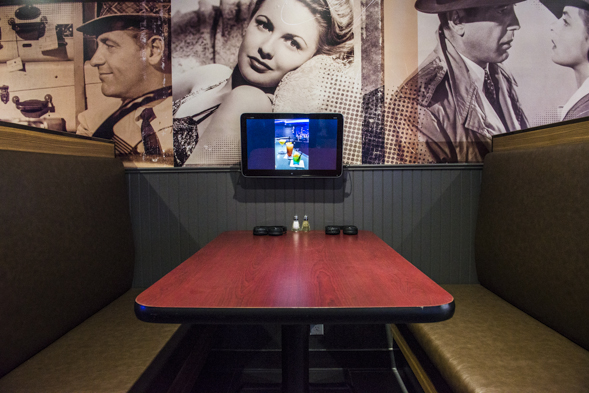 Customers are welcome to request what they want to watch on the TVs and those in booths equipped with tablets have access to the internet, games and even Netflix (headphones are available so as not to disturb others). WiFi and an abundance of electrical outlets confirm that spending large quantities of time (the opposite of micro) here is encouraged. 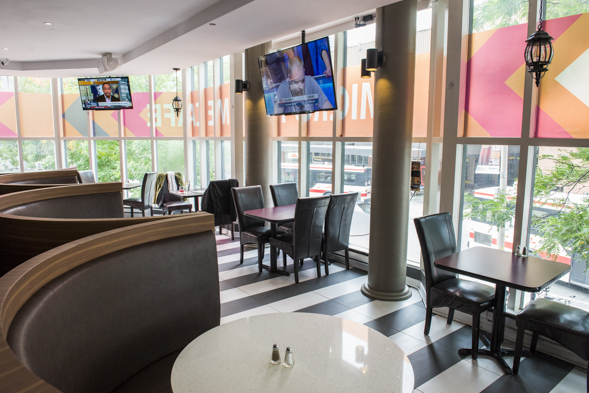 Hangout aspect aside, this seems to be more resto-bar than cafe (coffee is made using Lavazza Blue capsules), with a bunch of house cocktails, beers and wines on the menu along with daily drink specials. For those not interested in caffeine or alcohol, there's hot apple cider ($4.95) complete with a cinnamon stick as garnish - perfect for a chilly fall day. 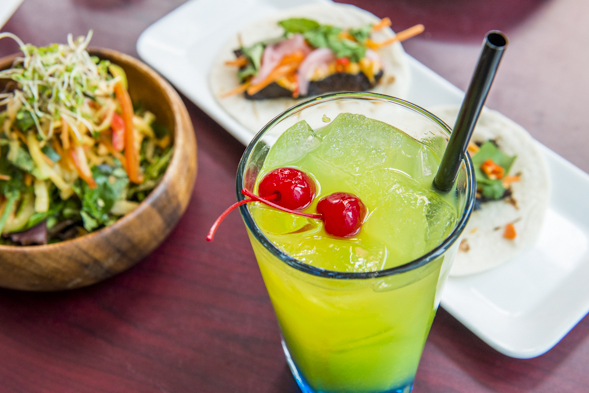 I ask for a cocktail recommendation and am presented with a Blue Monkey ($8), a layered drink of fruity and sweet Blue Curacao, Malibu, pineapple juice and orange juice that makes me wish I were at a tiki bar on a tropical island.

Instead of Indian, this spot now makes predominantly Asian (East and Southeast, to be exact) and Italian cuisine, along with fusions of the two and some typical Western breakfast and lunch offerings. Co-chefs Ben Perez and Khaled Boubess make just about everything in house, including their own noodles, broth and condiments. They even grow their own sprouts.

Nothing is frozen and their ingredients come from small suppliers. Both are formally trained chefs and Toronto-native Perez, who's travelled around Asia and worked in Australia, cooking at an Italian restaurant in Melbourne (I also used to live there and can attest that the city has great Italian food), has absorbed the flavours from his time abroad. 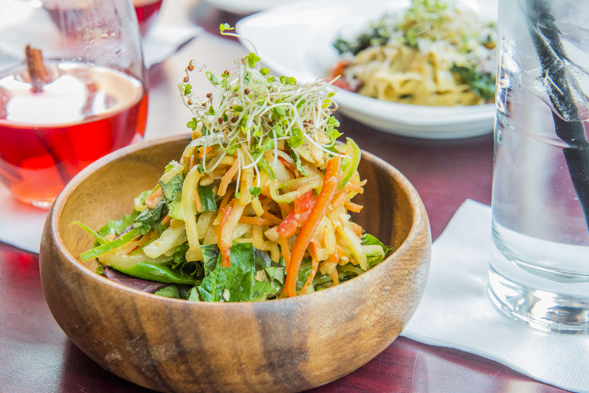 Inspired by Perez's jaunts to Thailand, a crunchy, sweet, savoury and spicy Thai salad ($9.50) contains mango, chilies and a ton of veggies mixed with peanuts and that distinctly Southeast Asian tang of fish sauce. 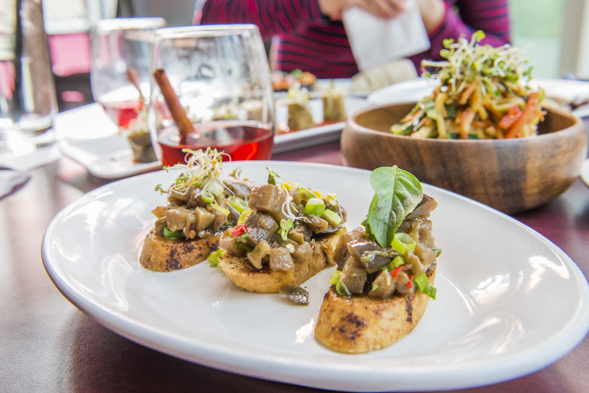 A plate of "Asian Bruschetta" ($8.50) is precisely what it sounds like: an Italian concept with Asian flavours. Slices of toasted baguette are topped with chopped eggplant, chilies and semi-dried tomatoes drizzled with a house-made fish sauce dressing that includes sesame oil and scallions. Thai basil as a garnish gives it a nice finishing touch (and taste).

"Eggplant Sushi" ($9) is the converse of the previous dish: an Asian concept with Italian flavours. Strips of eggplant are grilled and used to make rolls stuffed with peppers and onions topped with parmigiano cheese, giving them an entirely different identity from the bruschetta. They're plated with spicy marinara sauce and small pools of olive oil and vinegar for dipping. 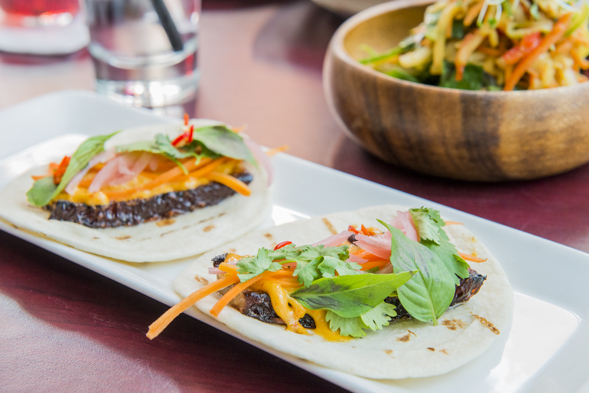 Mexican food also receives an injection of Asian ingredients through Micro Time's pork belly tacos ($14). Fatty, braised pork belly, pickled-in-house veg, spicy Asian aioli, Thai chilies and fresh herbs give these tacos bright flavours and an addictive heat. Perez admits the tortillas aren't made in house, although he tells me it's not difficult to do; in the near future they will. 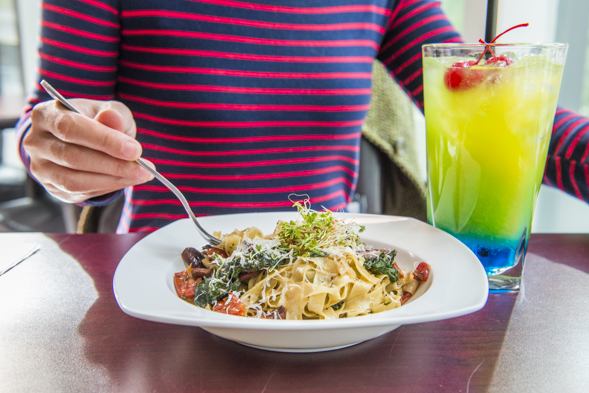 As previously mentioned, they make their own pasta, and the spaghetti aglio e olio ($7) is impressively put together. Granted, the noodles we receive are tagliatelle and not spaghetti, but they're deliciously light and go well with the salty olives, semi-dried tomatoes (dried in-house, of course), roasted garlic, olive oil and parmigiano.

Although the pasta sticks together a bit, I like that it's not too oily and you can definitely tell it's fresh.

I'd be interested in trying a fusion noodle dish, but there don't seem to be any on the menu - only Japanese ramen or Italian pasta. (However, internet research shows they've experimented with an appetizing-looking kimchi pasta for staff meal. I'd totally eat that.) 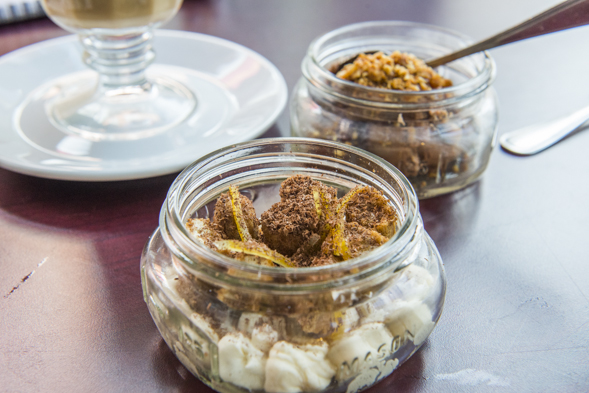 Unsurprisingly, desserts are all made in house as well, including a Nutella parfait ($6) of chocolate mousse, peanut butter and house-made jam - a classic combo of North American flavours - and a lemon tiramisu in a jar ($6) with candied lemon zest, chocolate shavings and crunchy ladyfingers layered over mascarpone cream. It's refreshing, light and not too sweet.

We finish off with some boozy Spanish coffee ($6.45) spiked with Galliano, Cointreau and brandy, and afterwards I'm about ready to topple over. 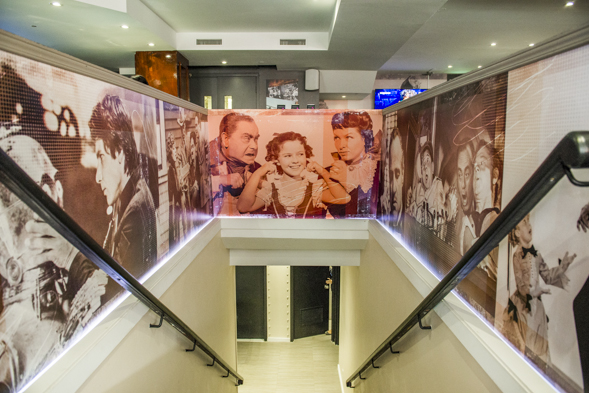 With its proximity to Ryerson and U of T and all the laptop-friendly amenities it provides, this place should appeal to students looking to hold late-night group study sessions; in fact, they welcome and encourage this here.

The random mix of cuisines that try to please everybody may be a bit baffling, yet it somehow works, and really, who cares as long as it tastes good? 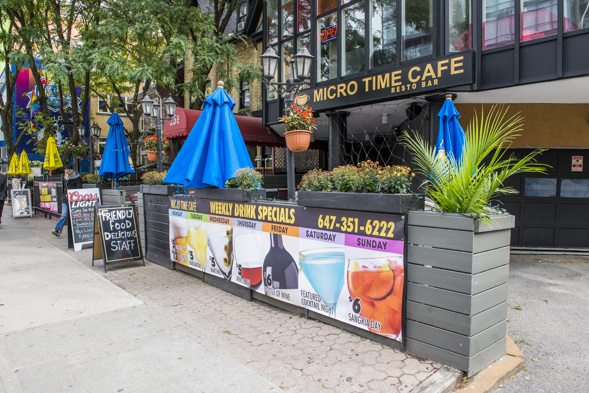