Lazy Daisy's Cafe has some of the most country charm in all of the city and its famous biscuits, buttermilk pancakes and bulking breakfast sandwiches are sure to leave you as full as a visit to grandma's house.

Besides the comforting ambiance of clattering plates and hissing espresso machines typical at most breakfast establishments, Lazy Daisy's stands out from the rest, fashioned after a farm in Midhurst, Ontario. 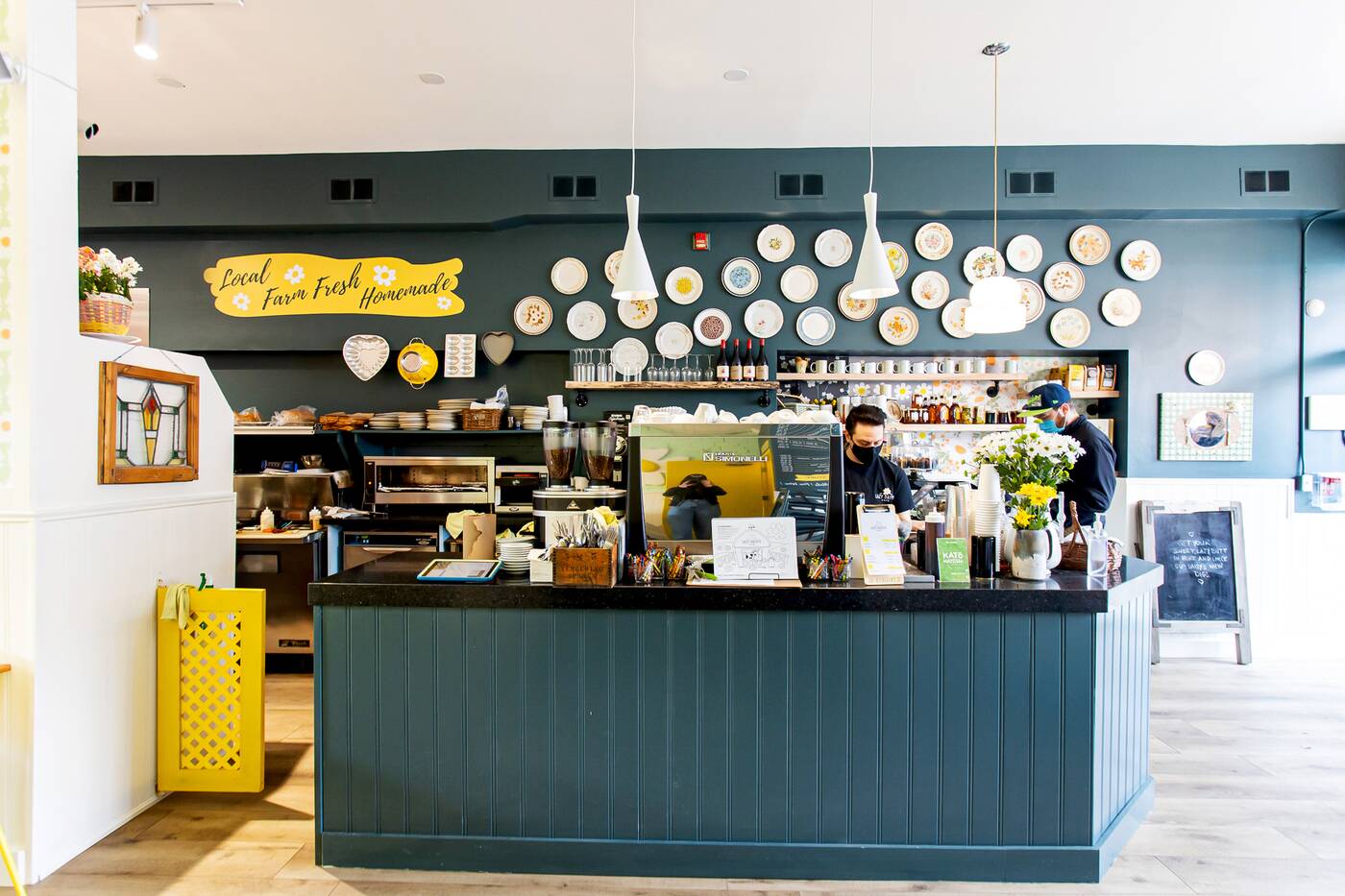 Not just any old farm, but owner Dawn Chapman's grandparents' farm where she grew up milking cows with her uncle and climbing apple trees that gave shade to a very lazy Daisy, one of the family's dairy cattle. 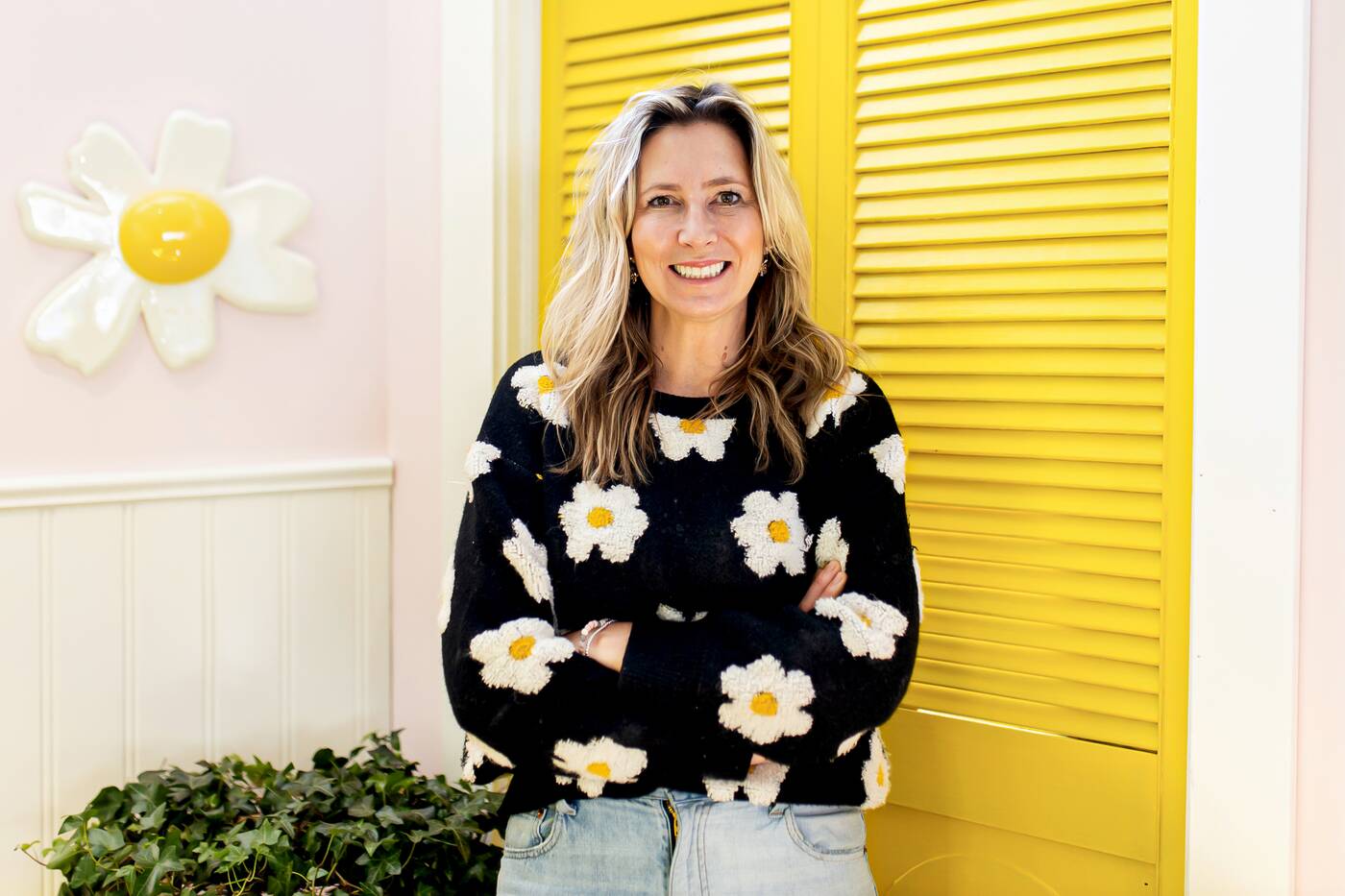 Ever since Chapman opened the cafe more than 10 years ago, she's been working to bring the spirit of that farm to Toronto.

"Grandma and grandpa's place was home to me," she says."Anyone could pop in at any time and [grandma Mabel would] have a tin of cookies or butter tarts ready." 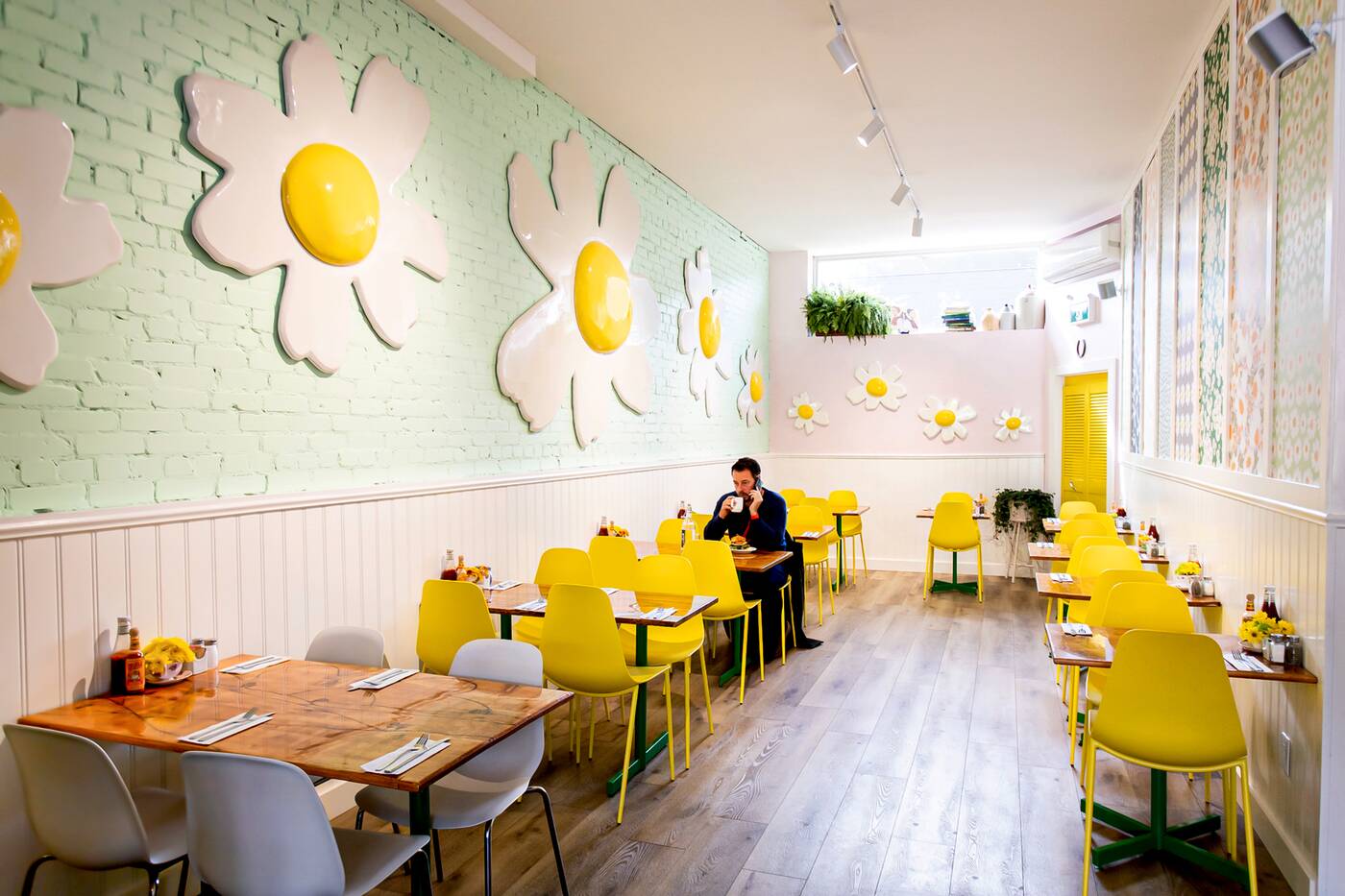 Lazy Daisy's feels every bit as friendly and inviting. The walls are done up with big daisy flowers and colourful wallpaper, as well as vintage plates and rusty horseshoes from her grandparent's house. 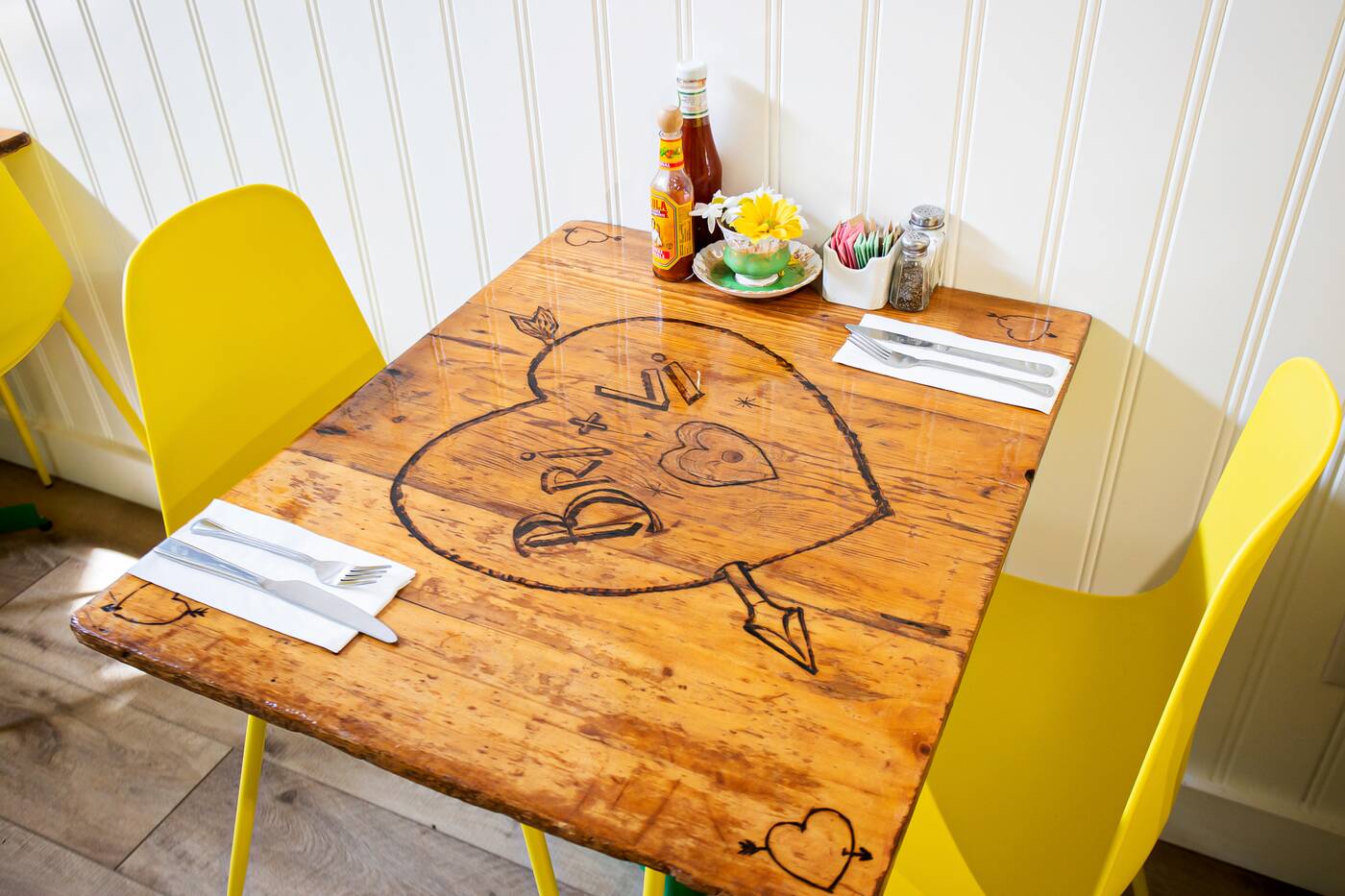 All of the tabletops are made from wood from an old barn on the land and include engravings by a local artist. 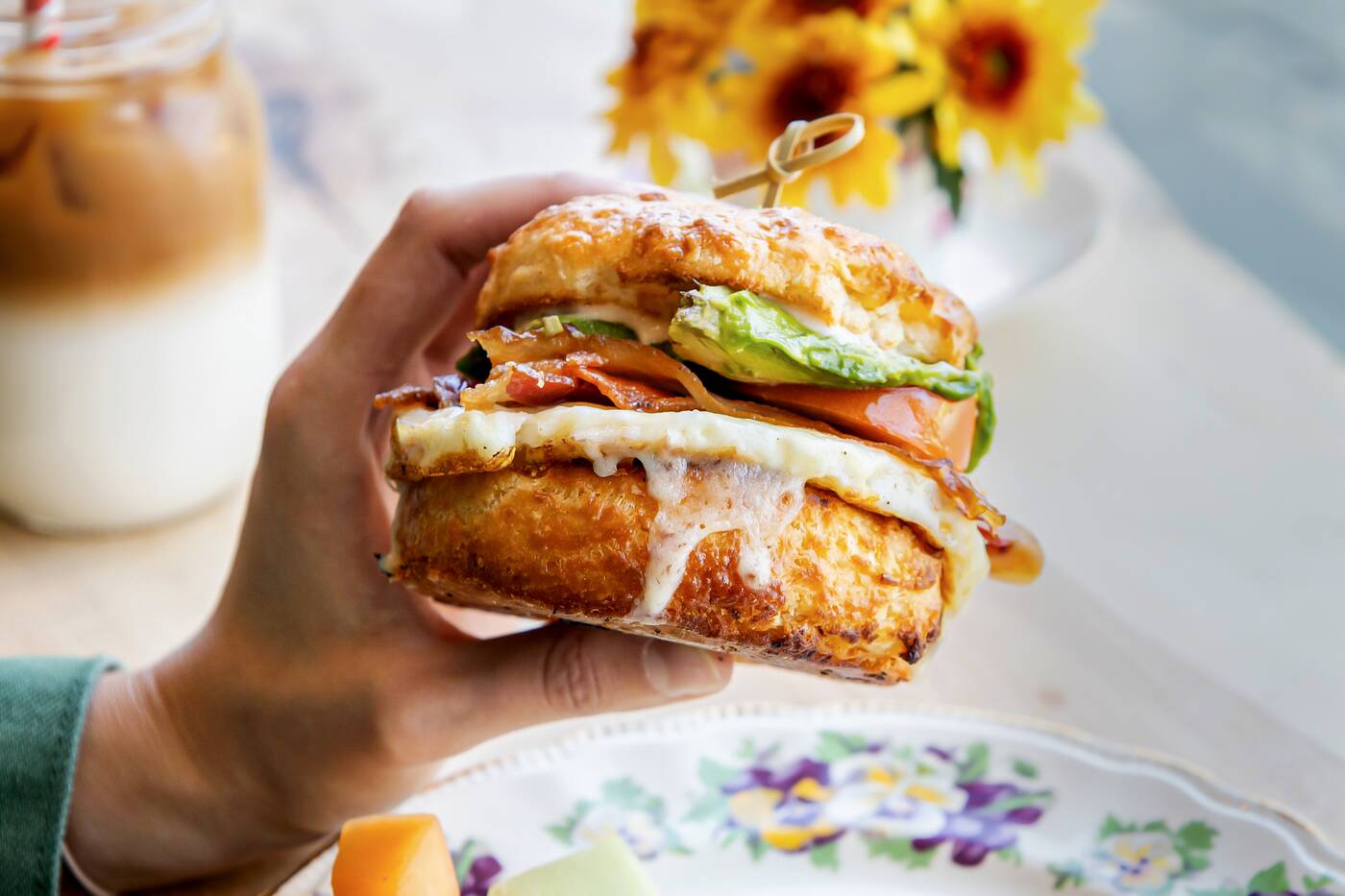 When it comes to the always farm-fresh food, everything can be traced to some town nearby in Ontario.

The most popular breakfast sandwich, rise and shine ($9.95) is made with a free-run egg and hormone-free Mennonite smoked bacon from Fresh From The Farm and aged white cheddar on a buttery, homemade biscuit. Add avocado for $2.50 and chipotle or garlic mayo for 75 cents. 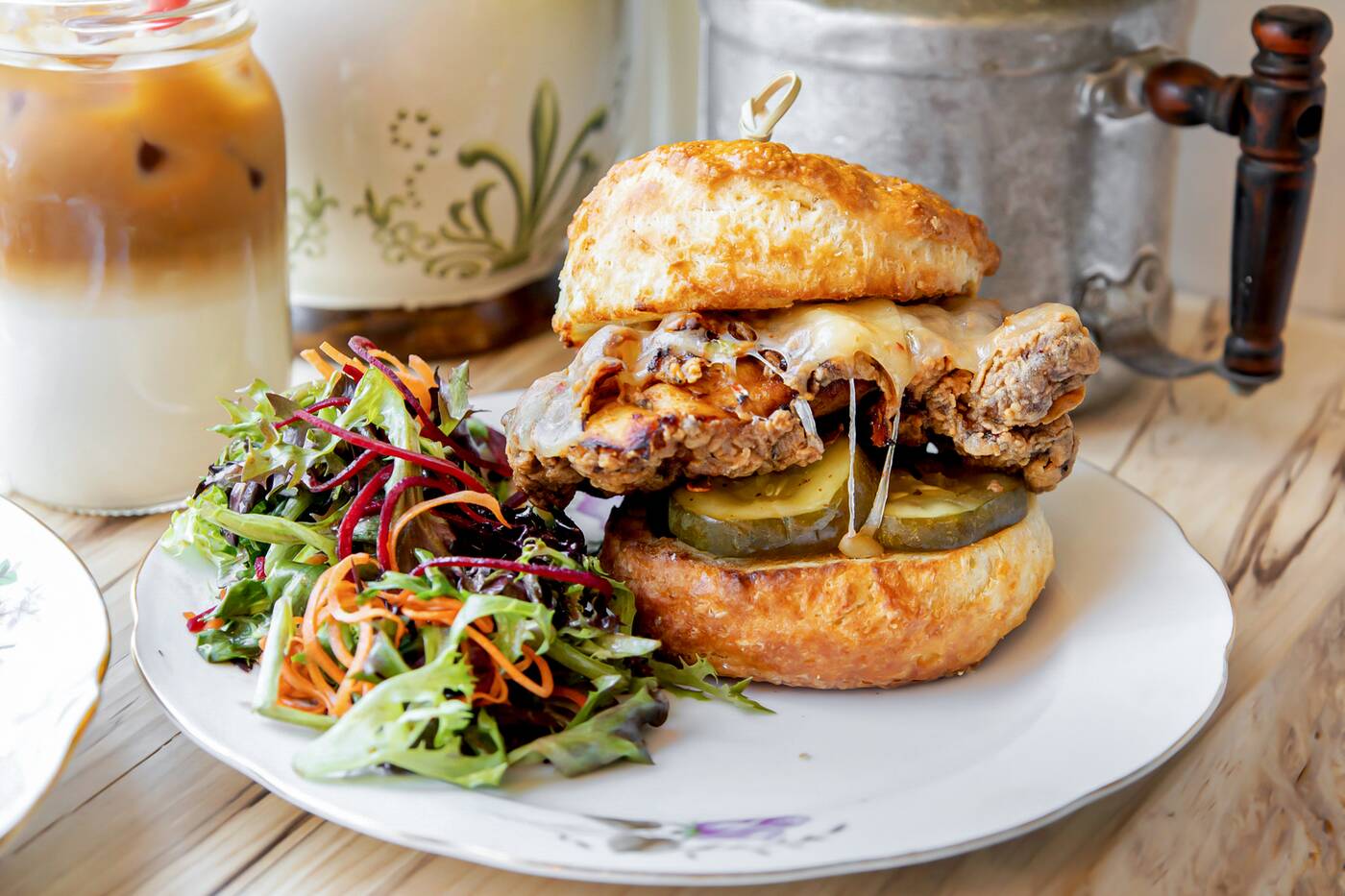 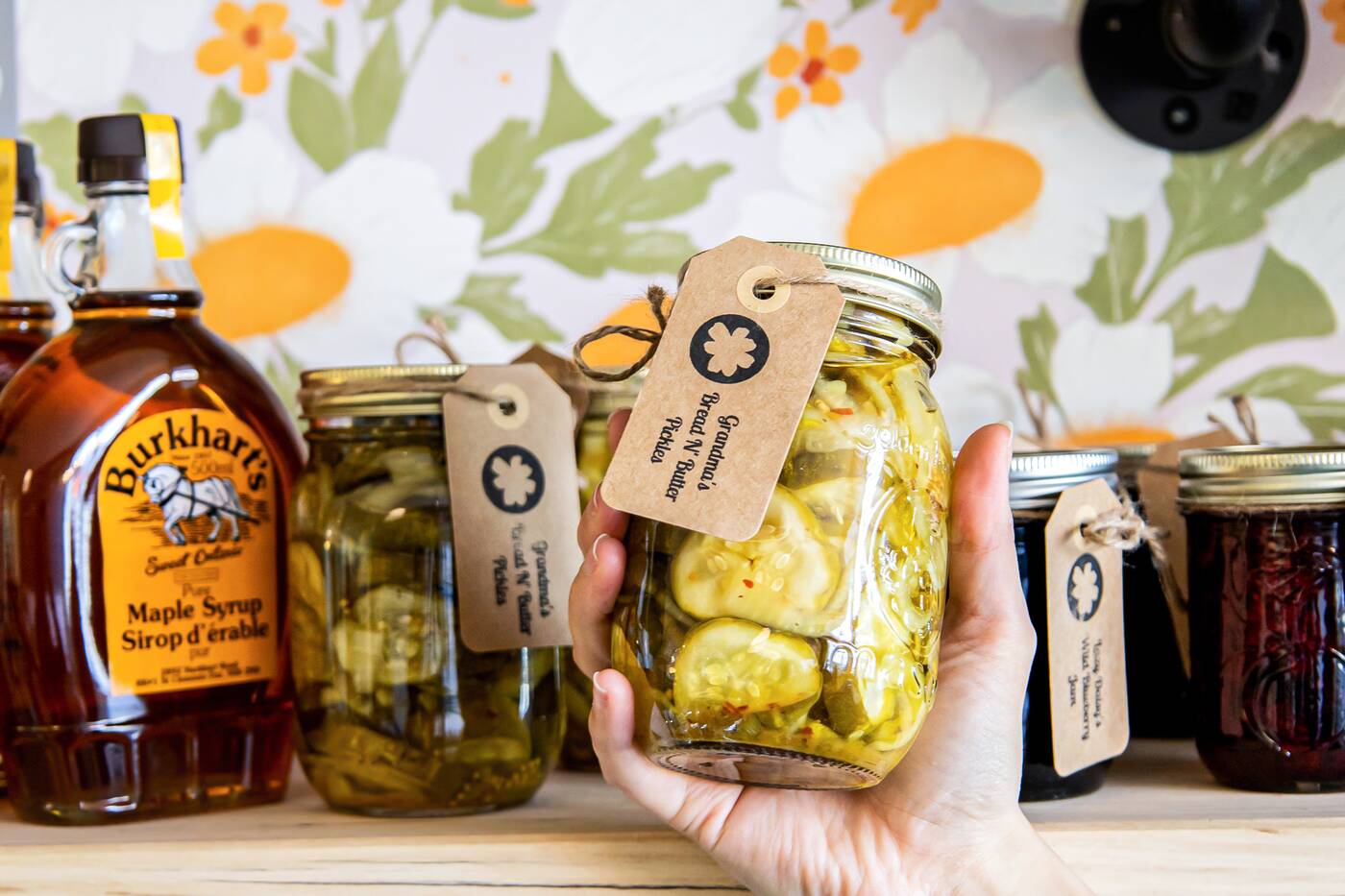 If you enjoy the pickles, you can buy them by the jar. There's also Burkhart's maple syrup and cans of homemade raspberry, strawberry and blueberry jams available. 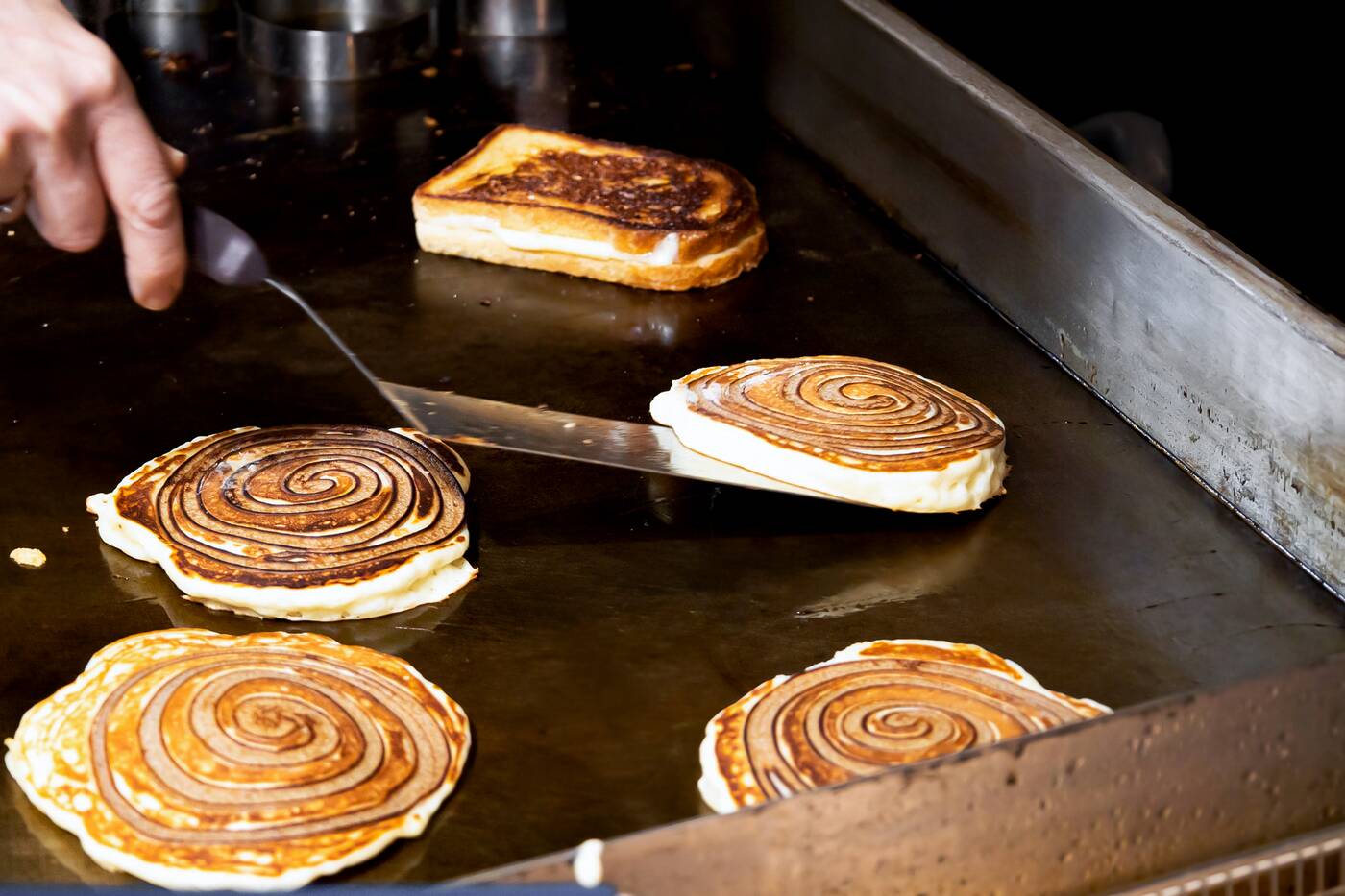 Buttermilk pancakes are served either in a classic stack with the same local maple syrup sold by the bottle, or with a cinnamon and nutmeg swirl. 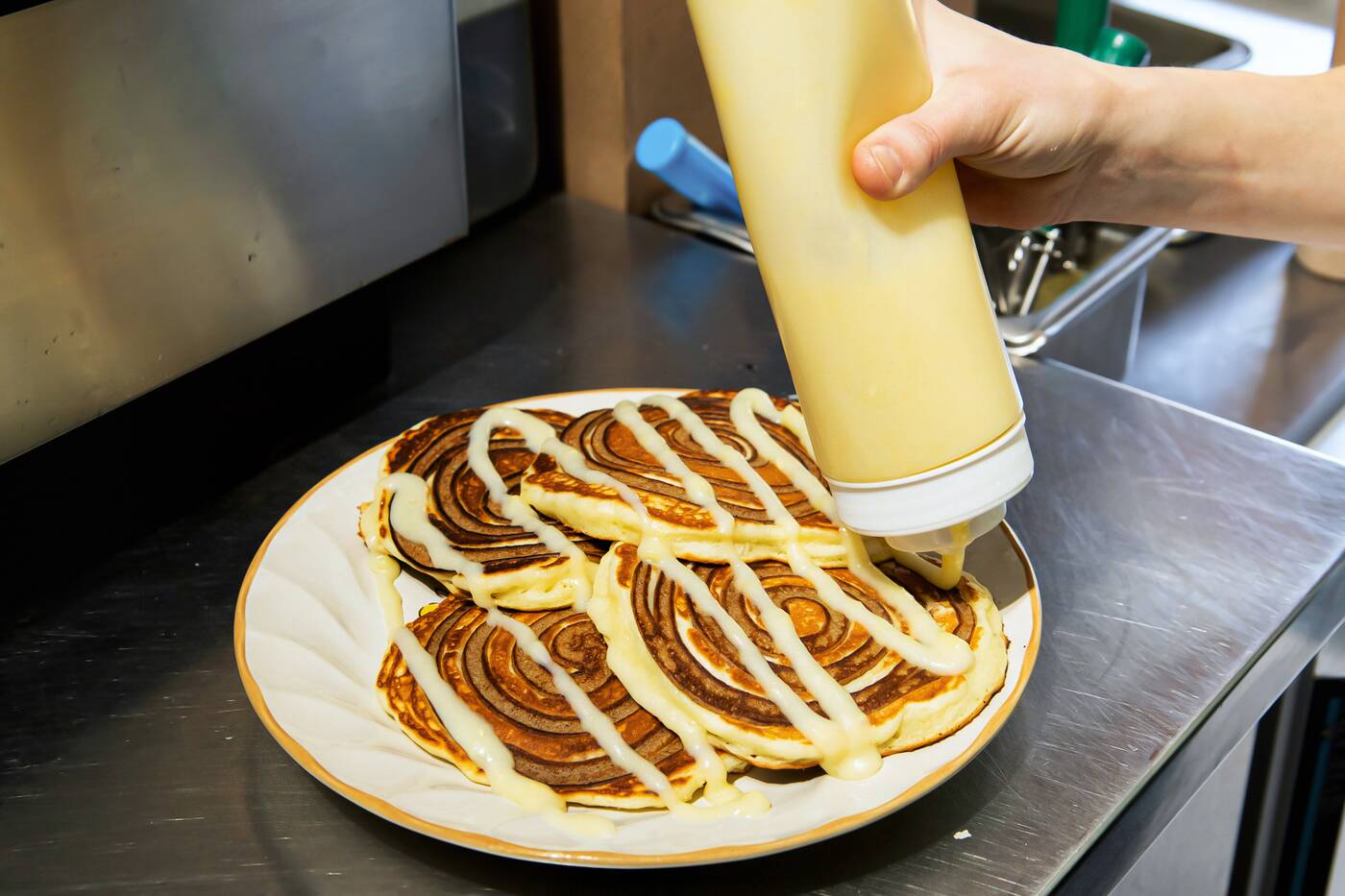 The cinnamon bun pancakes (four for $16.95) get drizzled with a cream cheese glaze and dressed up with whipped cream and strawberries. 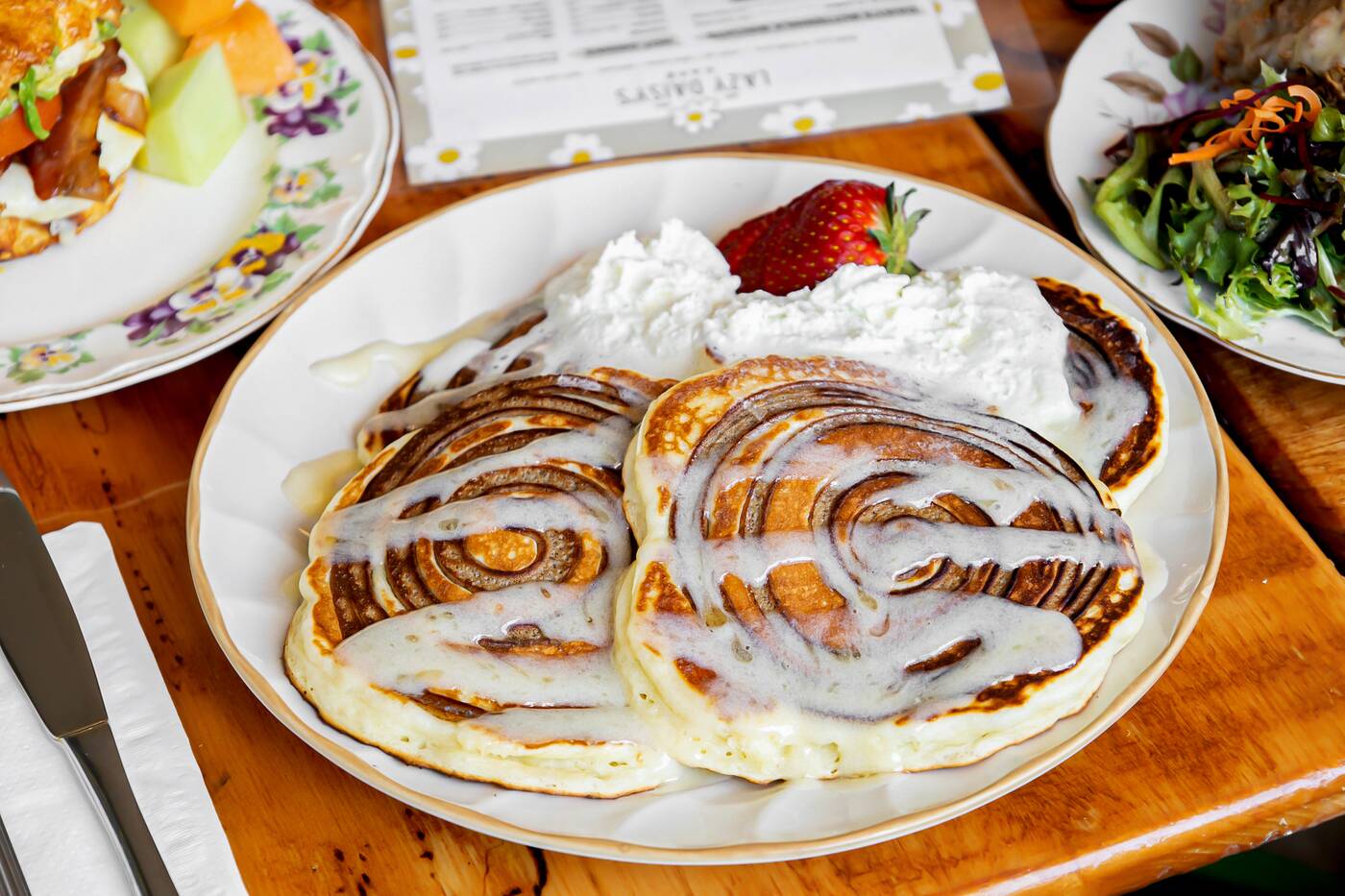 The buttermilk gives each pancake lots of fluffy height and a tangy flavour for truly addicting results. 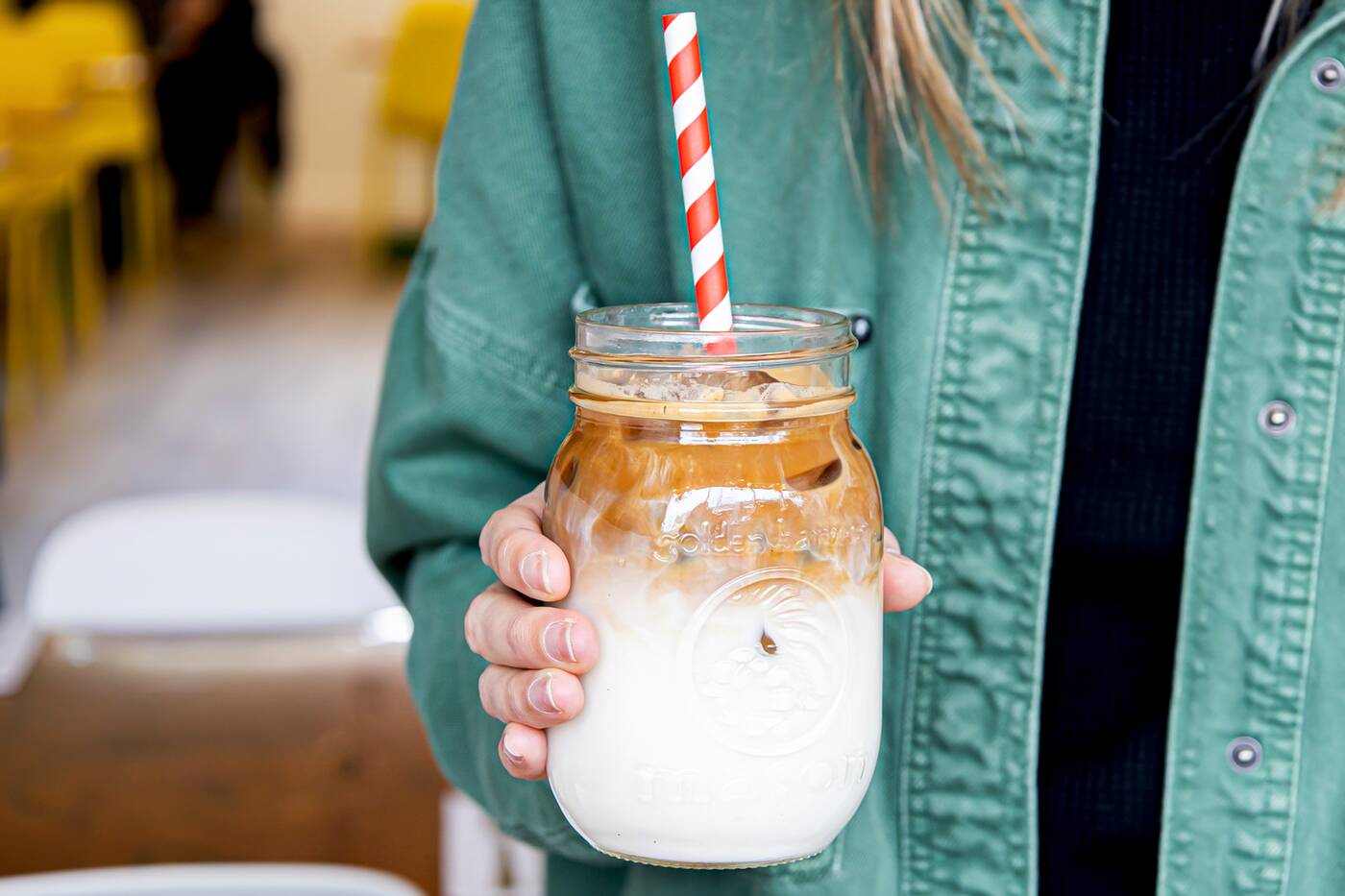 All of the coffees are made with a double shot of espresso and are available hot or iced. Add one of their flavour shots to an iced latte ($4.95) for a nice summer drink. 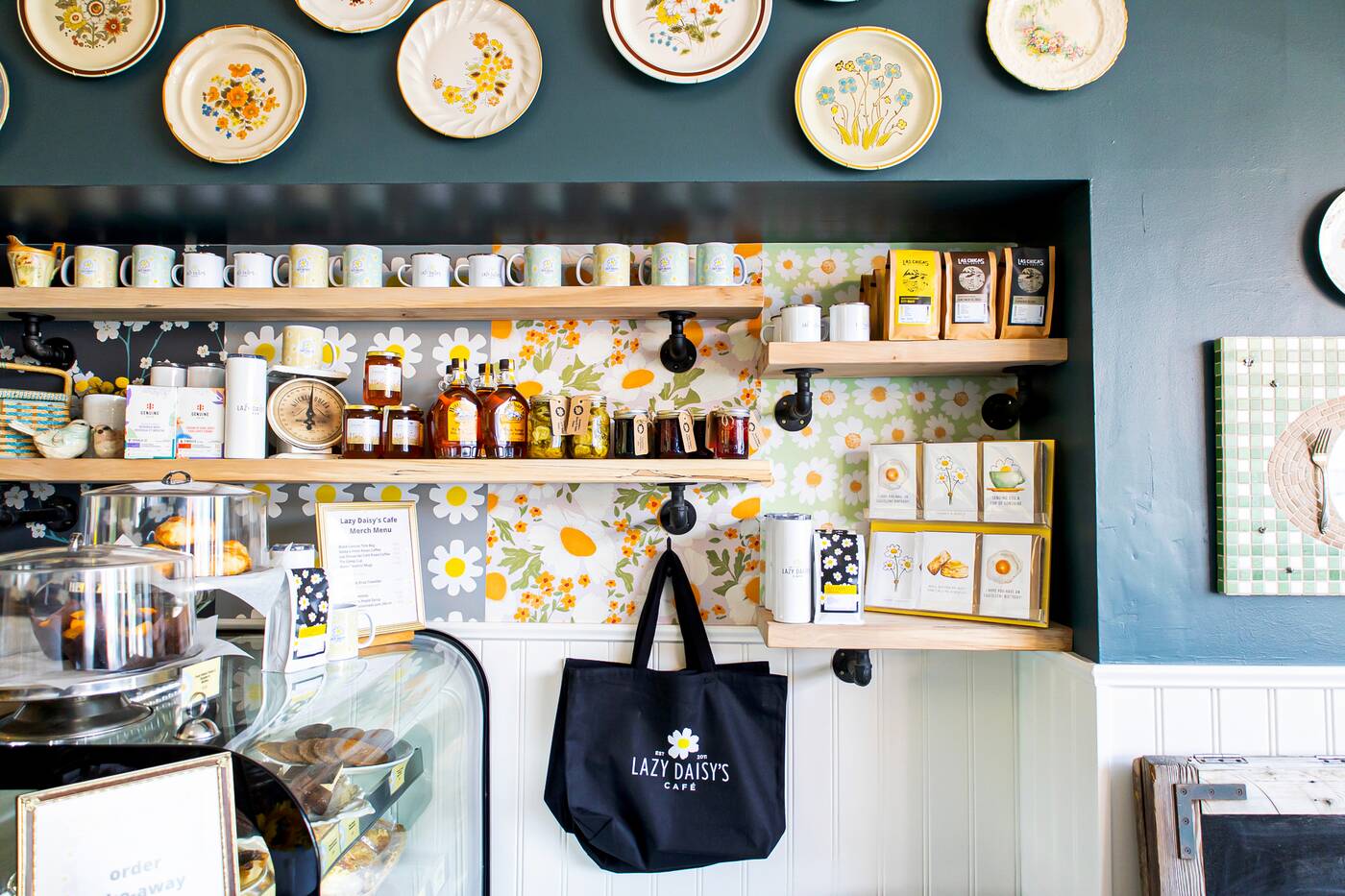 Find a few different merch items over by the counter including tote bags, mugs and coffee tumblers. 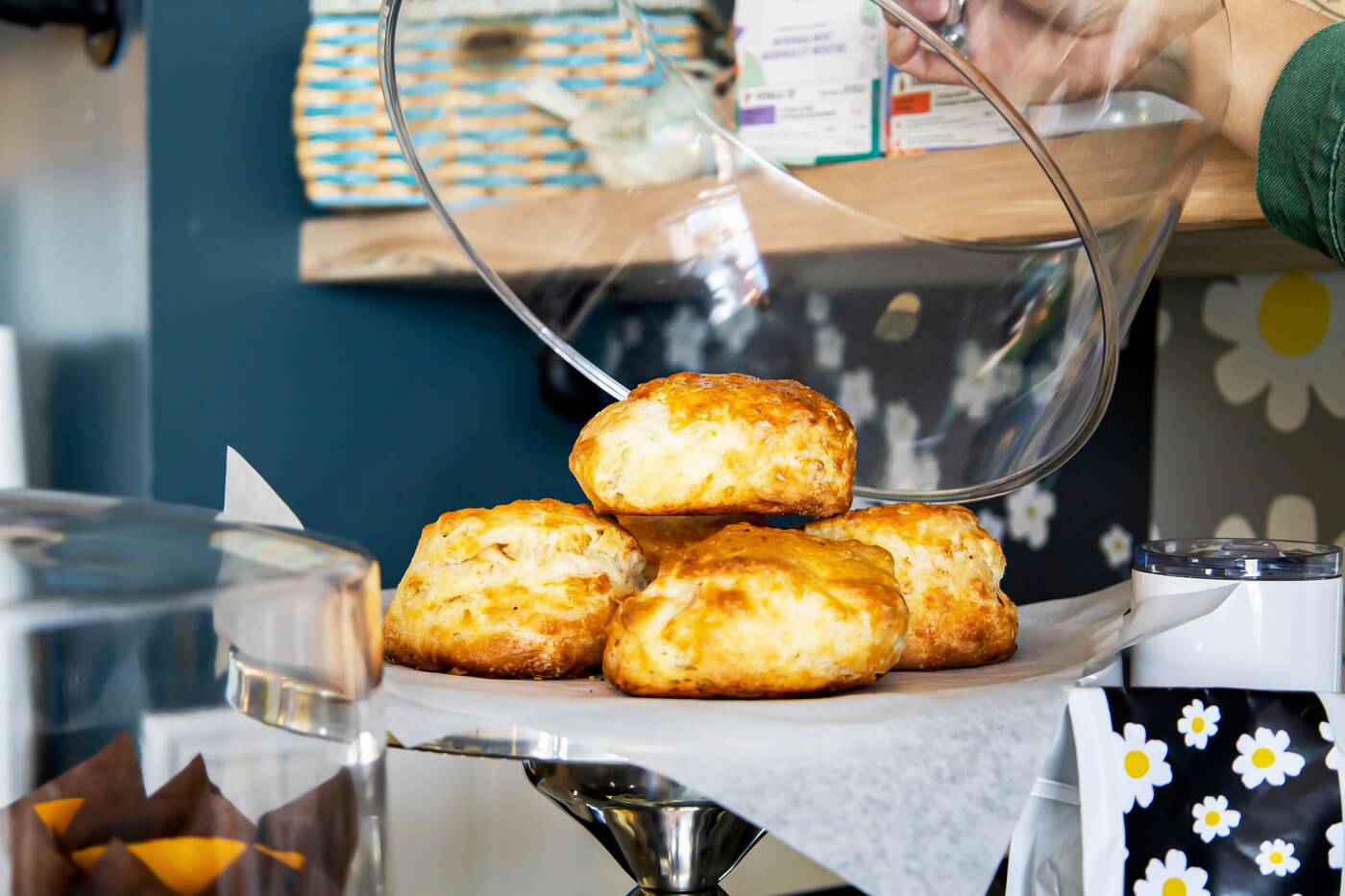 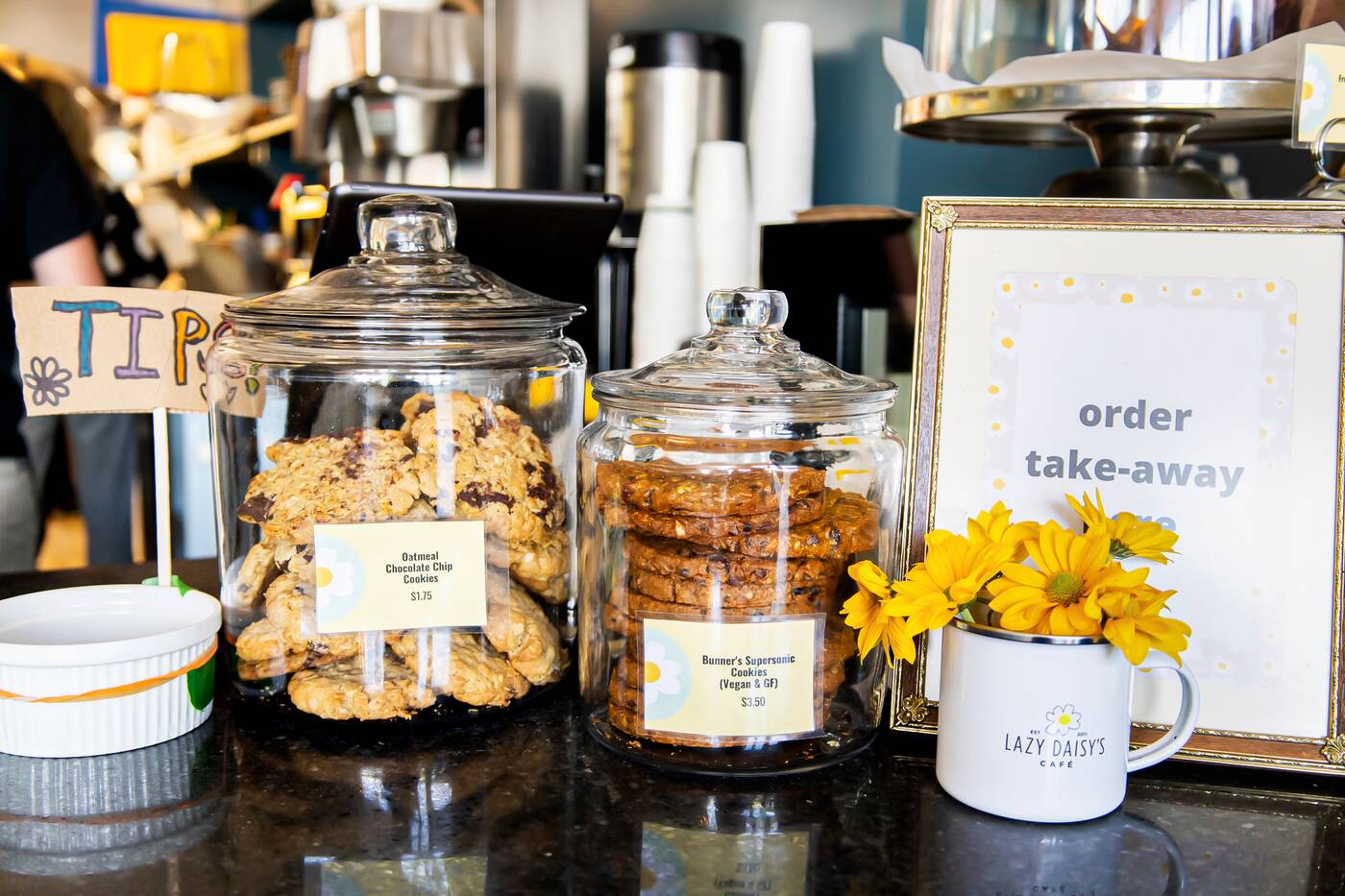 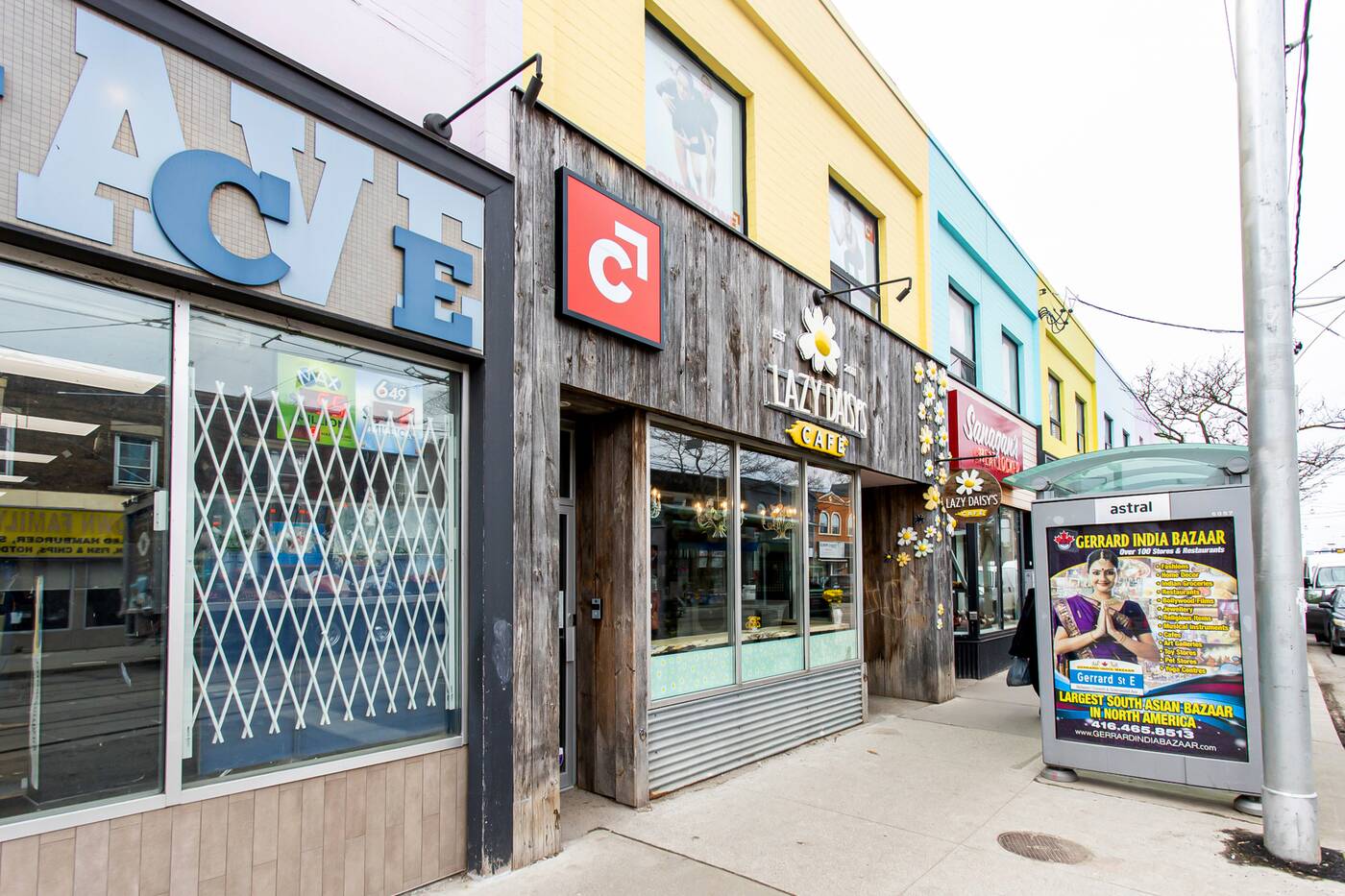