Labora used to be a Spanish tapas restaurant at the back of Campo Food Hall, a conglomeration of businesses collected in the style of a Spanish market, but now the entire space is devoted solely to the restaurant.

It’s a good move, seeing as the tapas offerings here have become some of the most popular in the city at this restaurant that’s still open from lunch until late night, and now offers brunch. 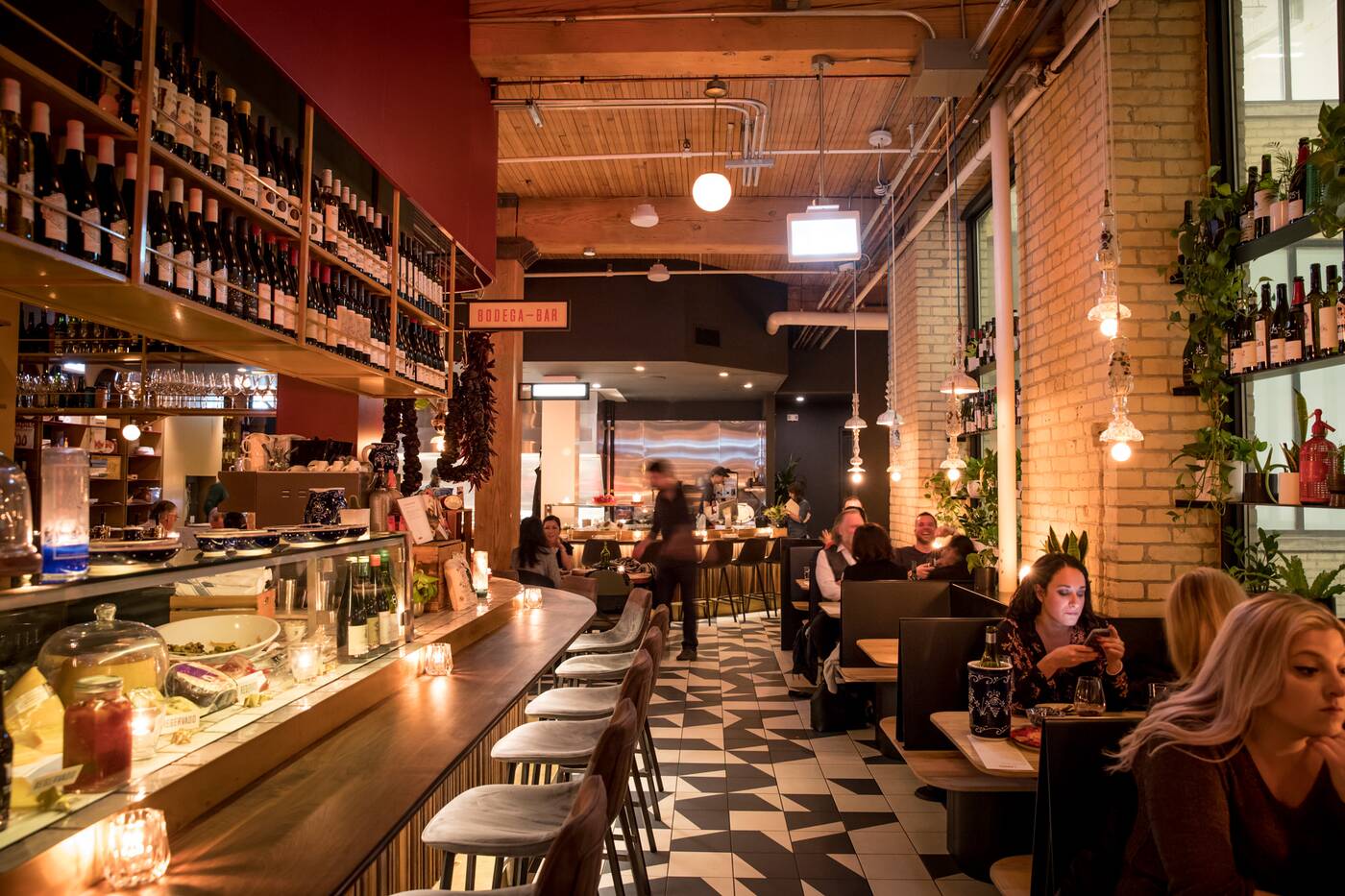 About 30 additional seats were gained by blowing out a former juice bar area, opening up the entirety of a nearly restaurant-length bar for seating, and placing romantic little high tables and chairs lit by fat, melting candles into a previous retail section at the front. 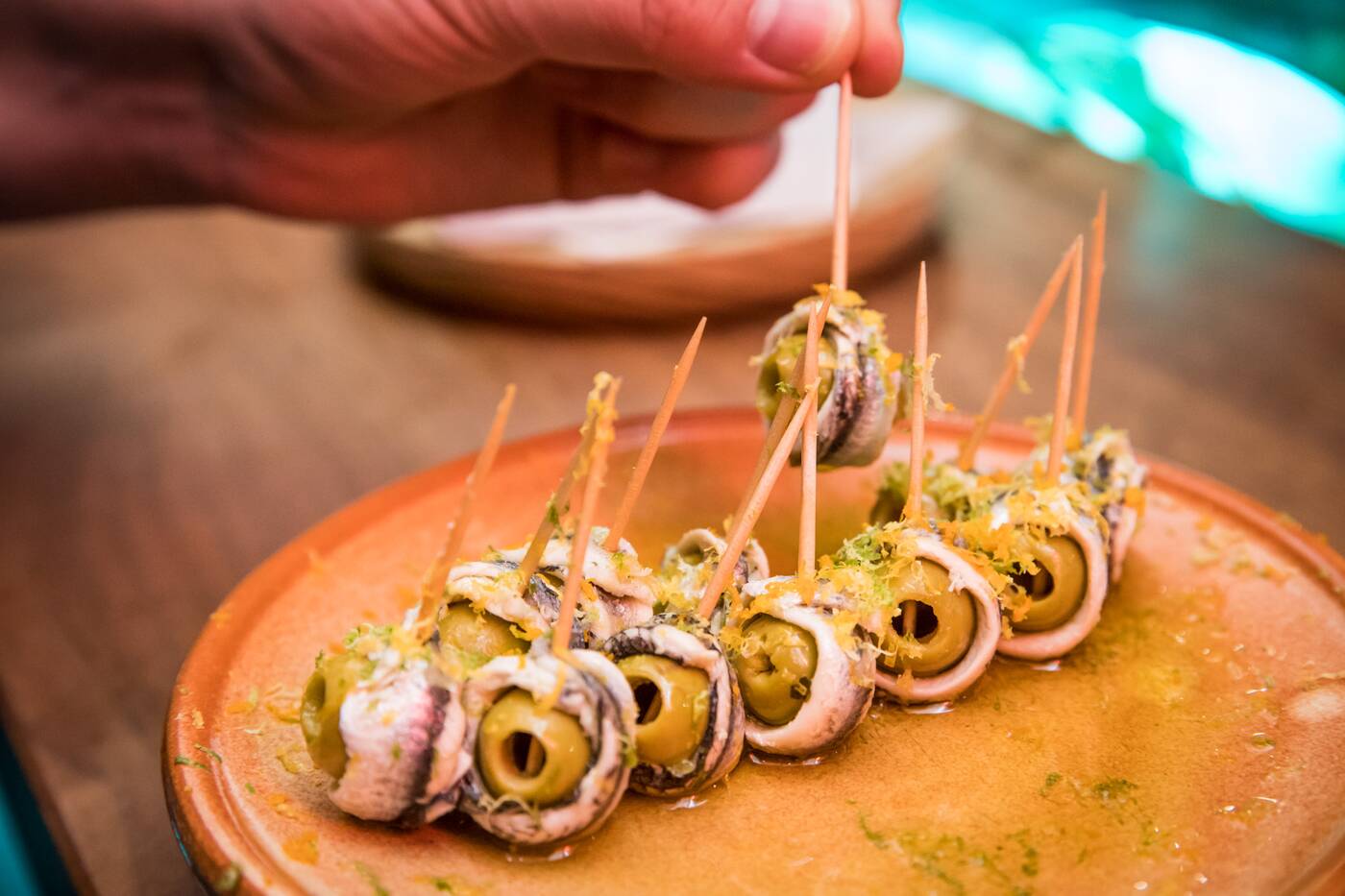 Boquerones ($11.50 for six) are part of a selection of snacks to start with vermouth, very tart lemon-cured anchovies wrapped around bitter arbequina olives encouraging you to reach for your cocktail. 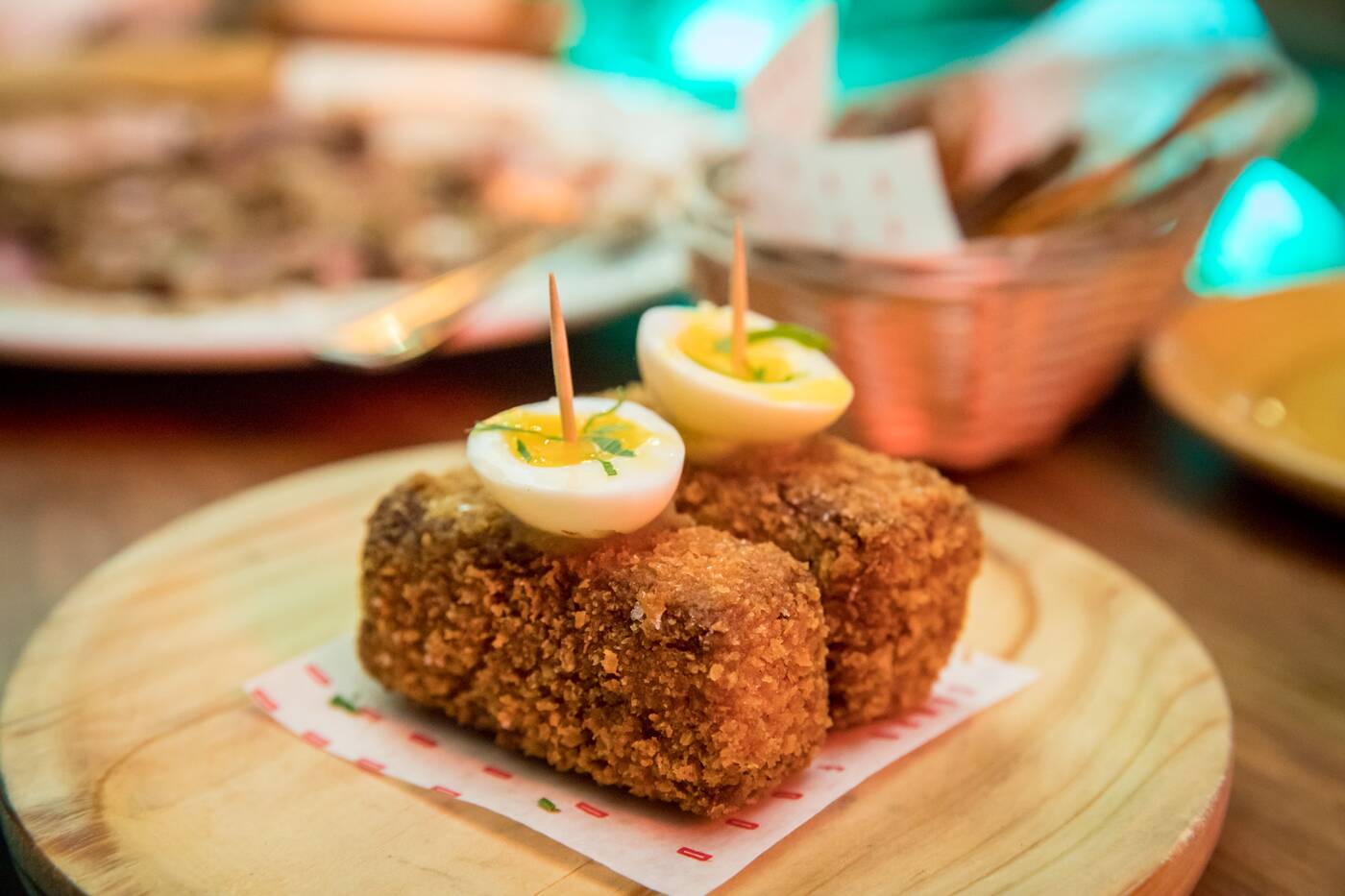 Croquetas de cordoniz ($12 for an order of two) are palm-sized bricks of molten quail meat pulled off the bone and mixed with rich bechamel, coated in panko, deep-fried to a crispy golden brown and topped off with half a soft-cooked quail egg. 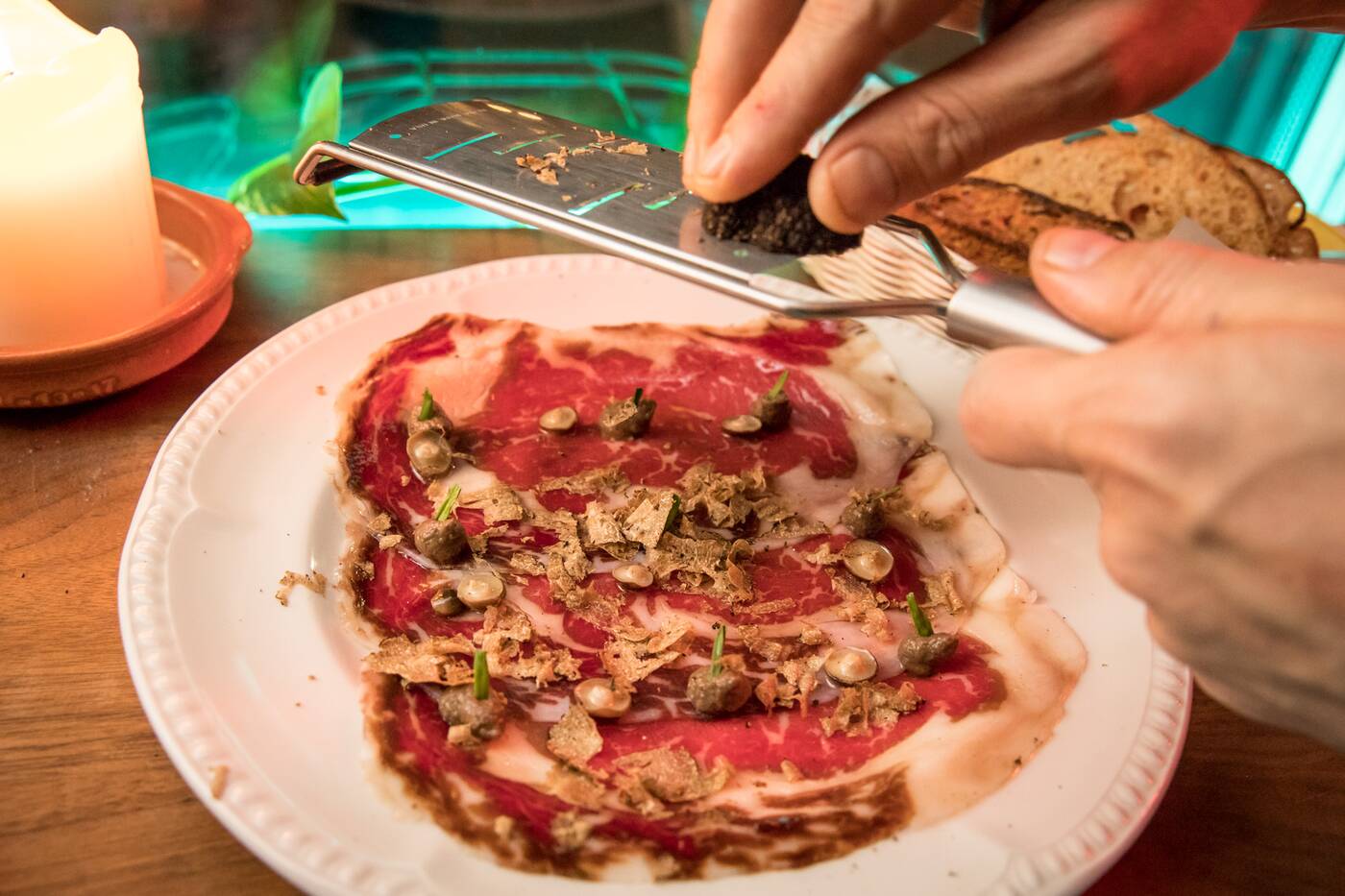 Rubia Gallega ($19.50 for a 40-gram serving, translating roughly to “Galician blonde”) takes the luxe tapas here to a new level, whole ribeye cured in house with salt and sugar over seven weeks and cut thin like ham. 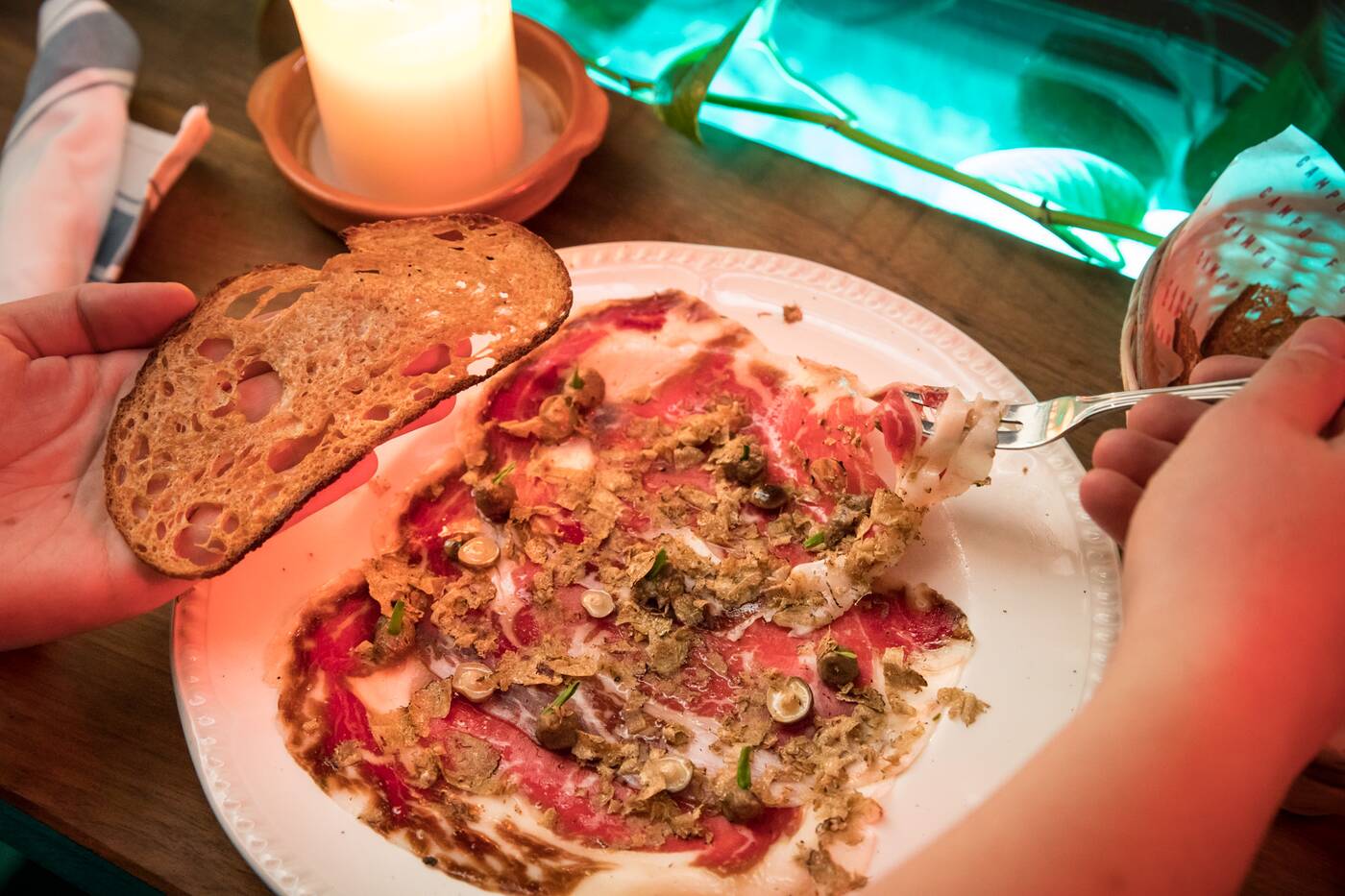 It’s set off by porcini puree, tiny honey mushrooms, and a generous tableside shaving of fragrant, funky truffle. The combination is a layering of rich on rich on rich, silky mushrooms combining with the fatty meat, best delivered by a vehicle of incredibly airy sourdough crisps. 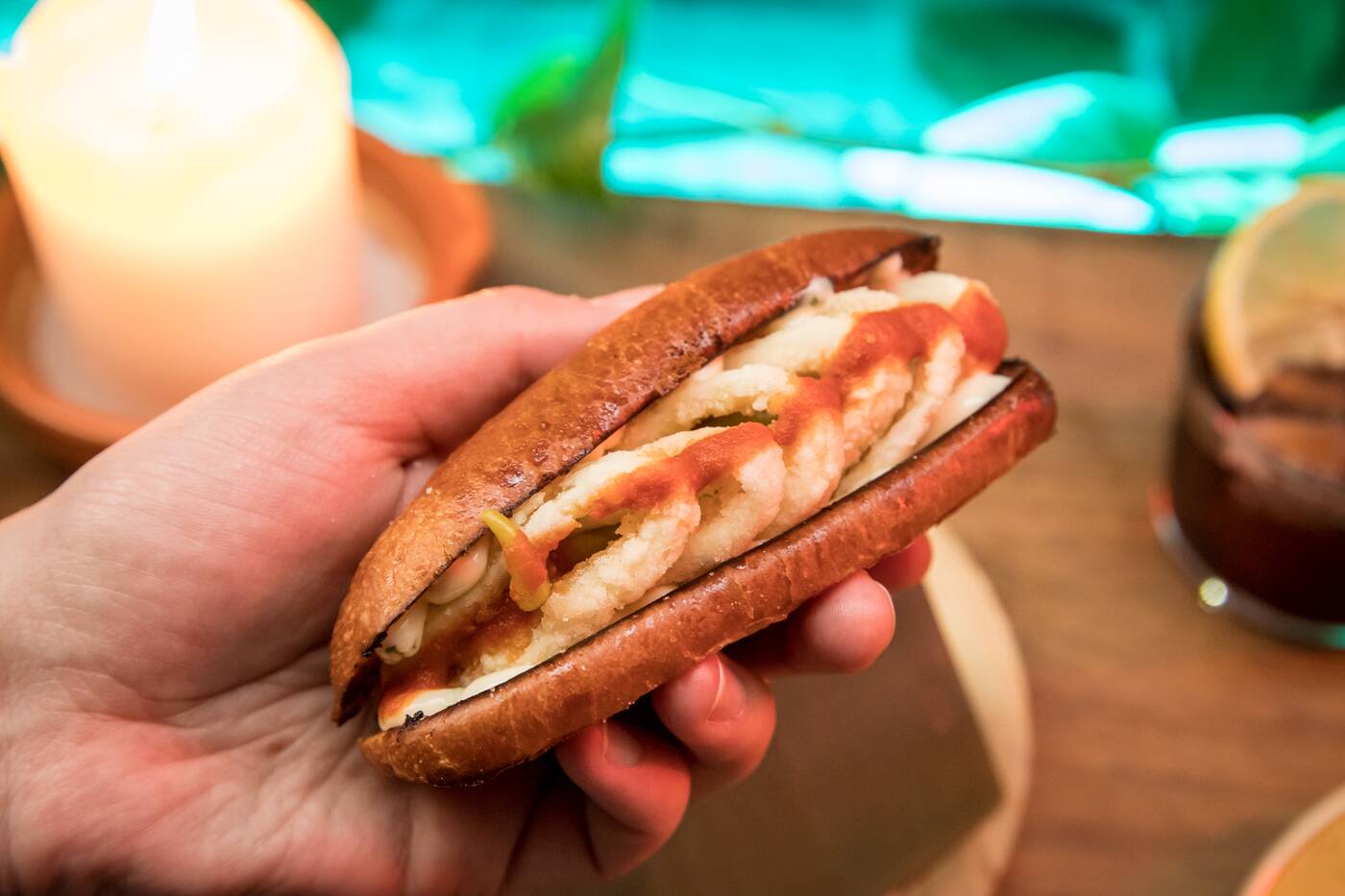 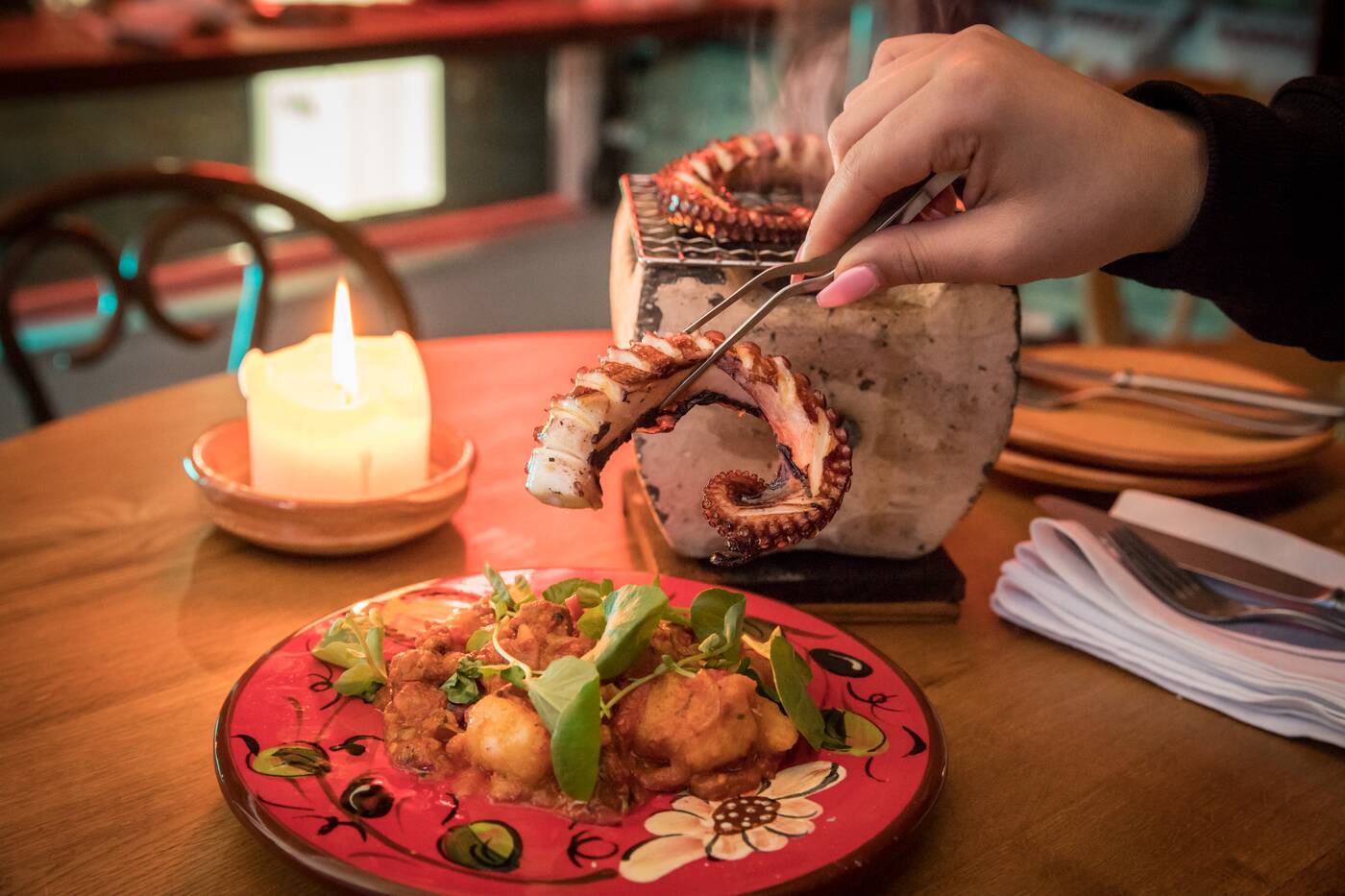 Pulpo ($23.50) sees octopus tentacles served tableside over a miniature flaming olive wood grill, paying homage to a traditional preparation of octopus. It’s removed from the grill for you and plated atop a potato, chorizo and red pepper mixture that’s also very traditional. 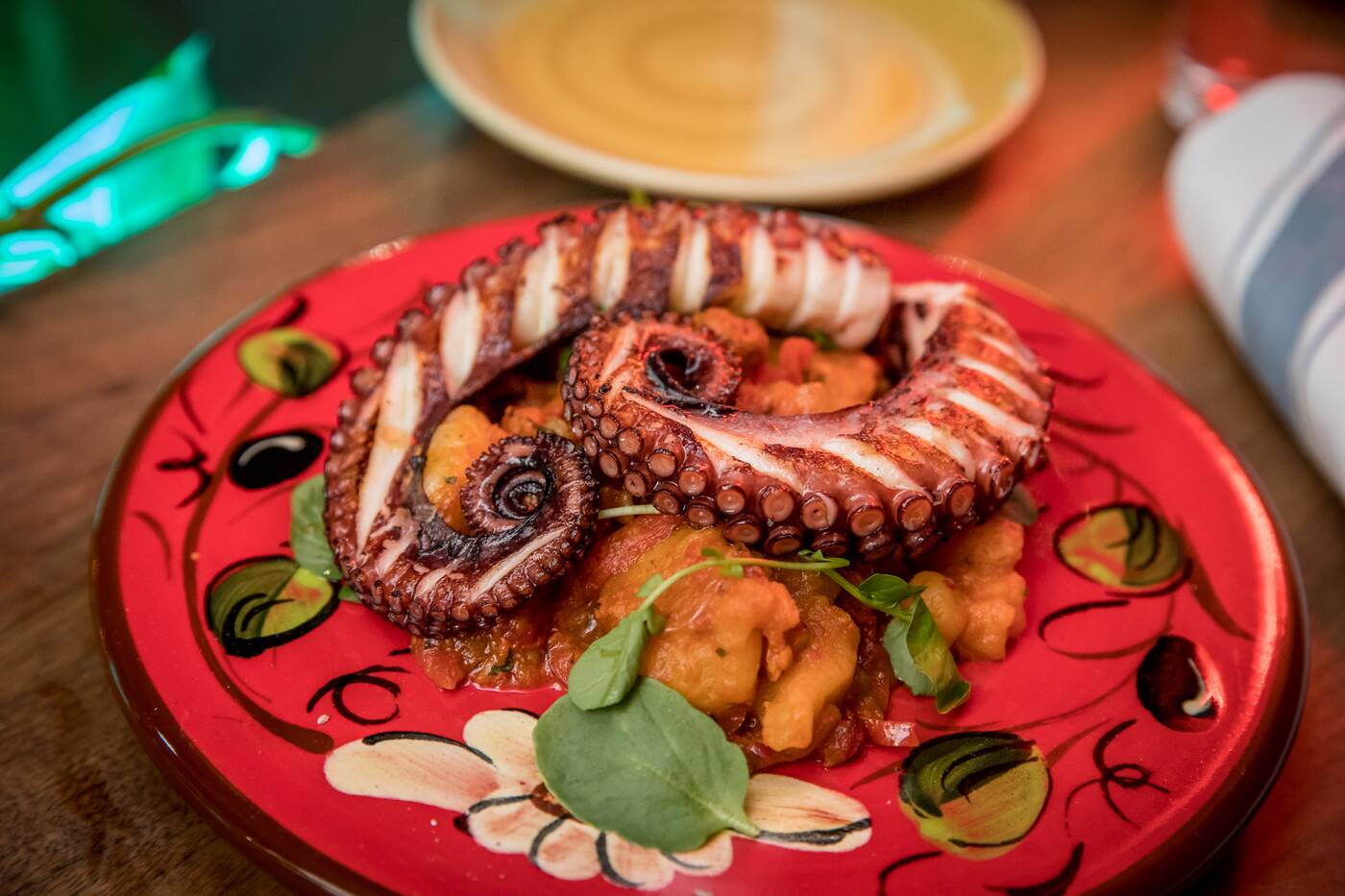 The octopus is the perfect texture, tender yet charred, lovely knife work emphasizing the contrast between crispy exterior and chewy interior. 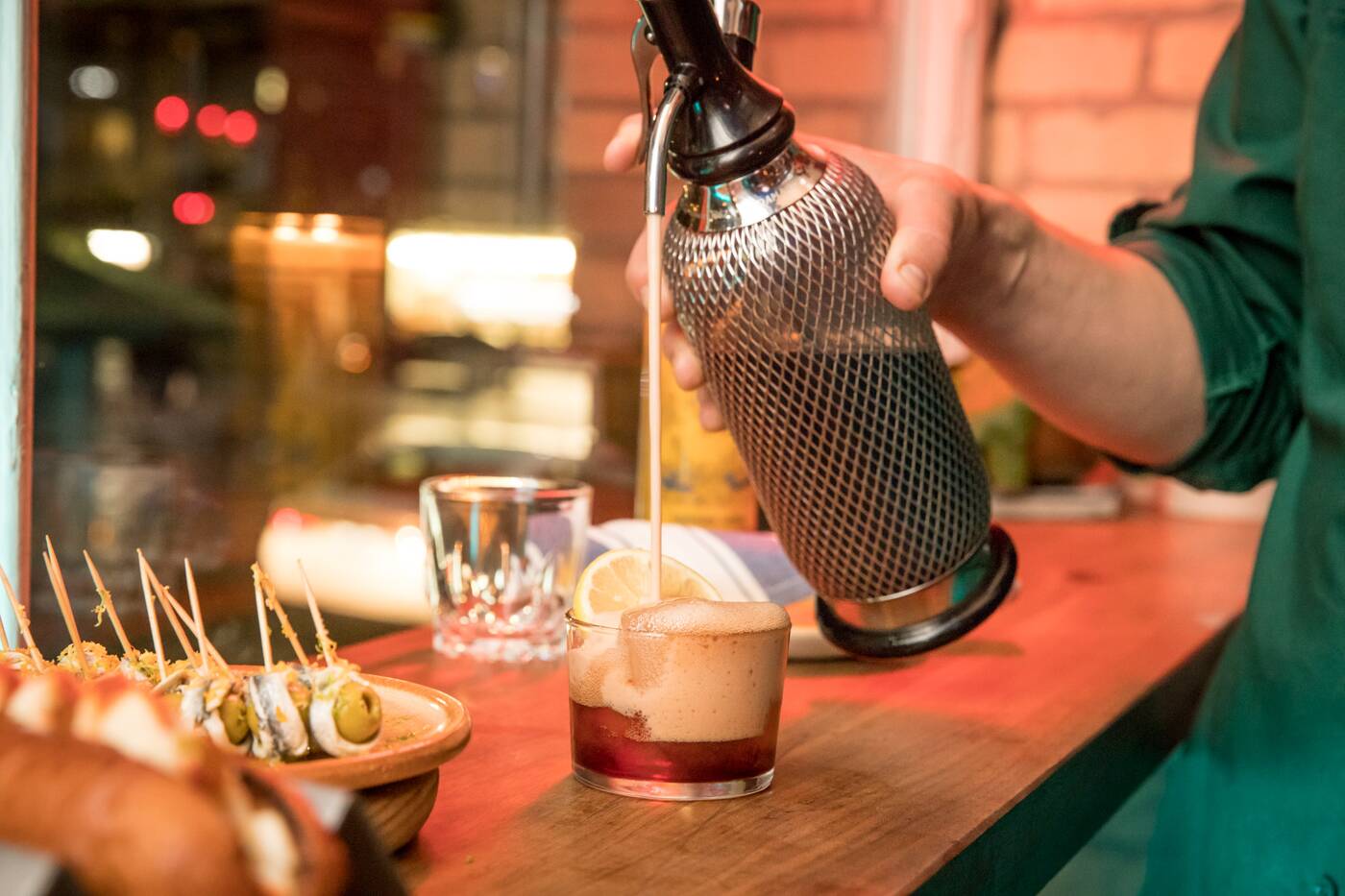 I’m happy to see Labora Cola ($11) held over from the original cocktail menu, bittersweet carbonated Iris Dorado vermouth with a little lemon juice and a lemon wheel that mimics the presentation style of Coca-Cola. 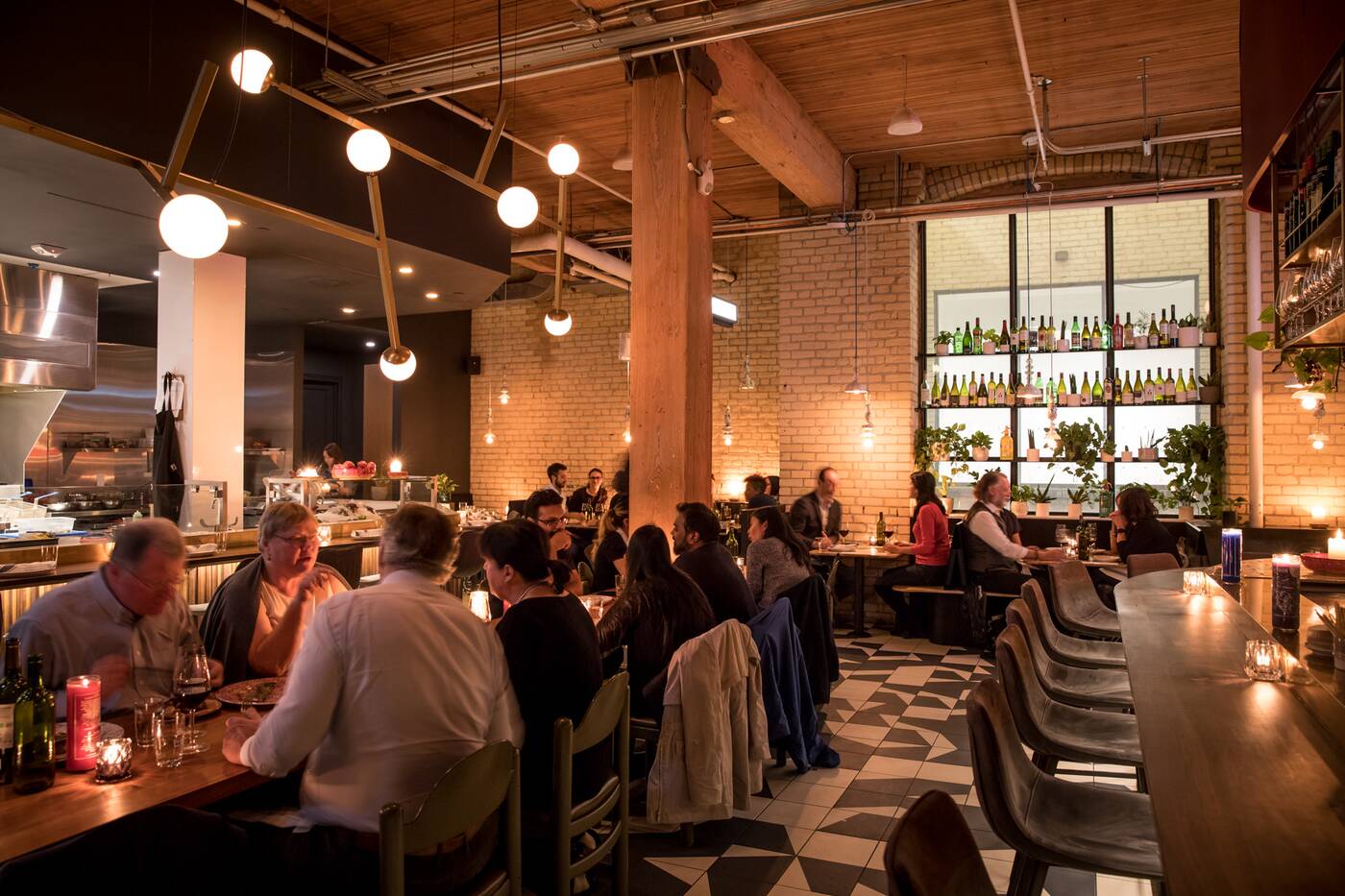 Pretty much everything still comes from Spain, and you can still purchase pantry items like Jamon-Iberico-flavoured chips and olives here. 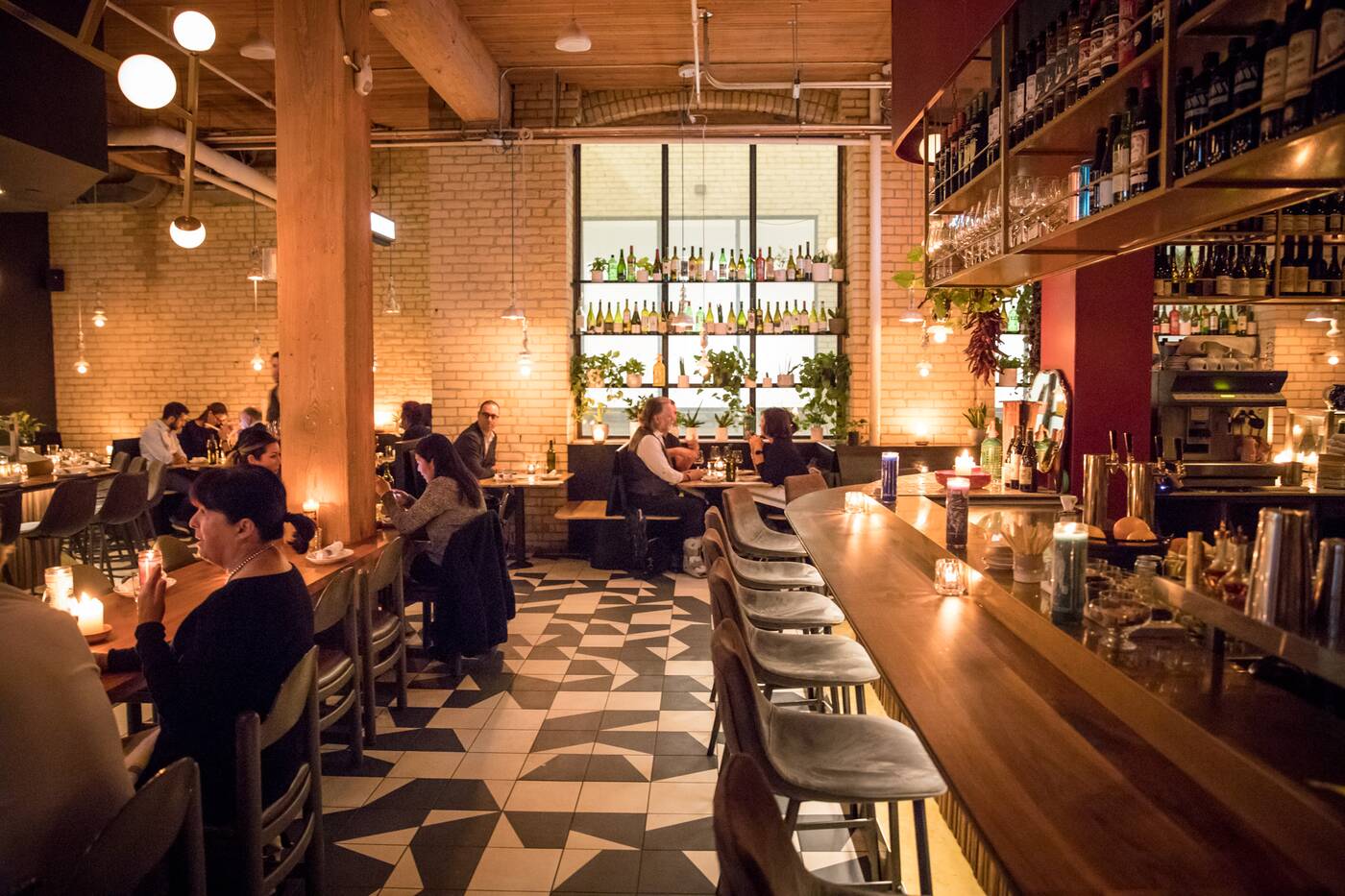 The salad bar is now a raw bar with sea urchin shucked to order as well as Spanish deep water prawns and cockles. 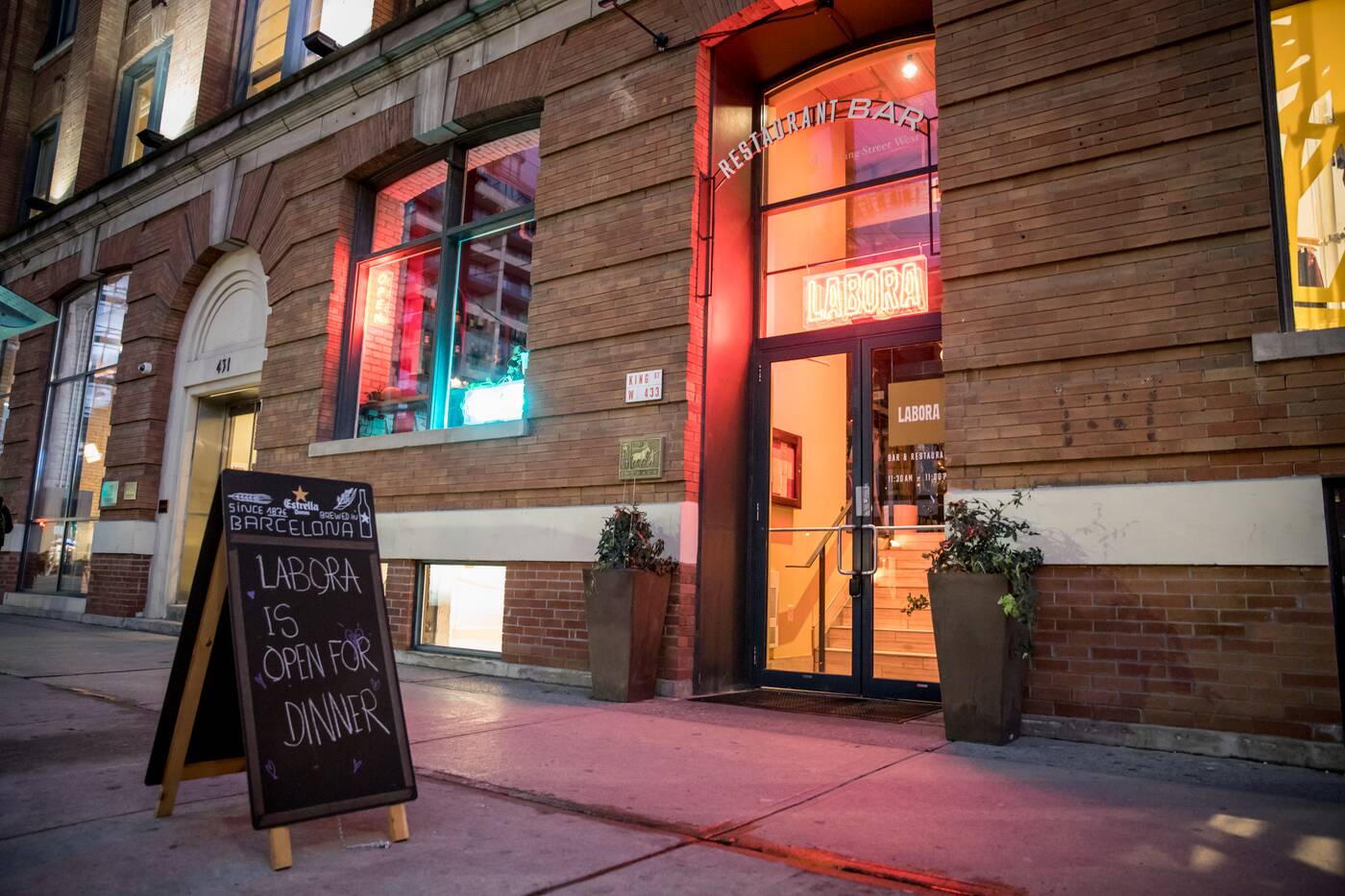