King Palace may be tucked out of sight at the Yonge and Church bend, but many have it pinned for their generous helpings at affordable rates. Nearly a decade in business (if you factor in time served at their former Richmond location), it's a popular stopover for taxi-folk and late-shifters due to its daily midnight curfew. While not exactly courtly in look, when other Pakistani kitchens have closed and you're central, King Palace may suddenly take on an air of regal proportions. 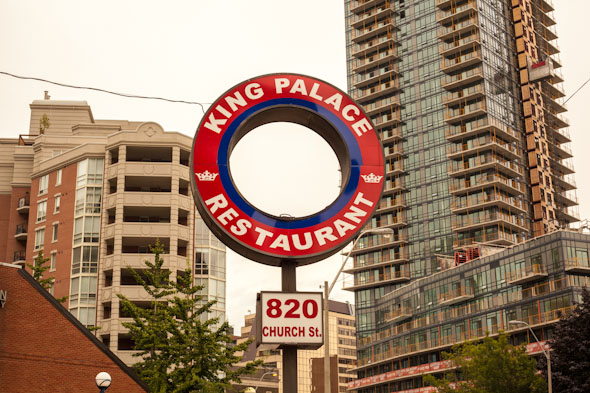 Once nearby, you can't miss it. A wand-like, refitted donut sign looms imposingly over the lot and the wall adjacent to the entrance features a large-scale version of the menu. The modest seating and ambiance, as well, speaks to its former digs but it serves its purpose. If it's your first visit, the extensive glass counter actually seems to justify the near limitless number of combinations at your whim. Overwhelming for some patrons, indeed, but most goers will be impressed. 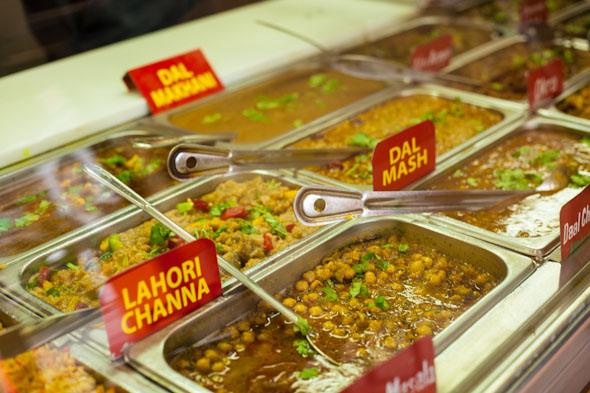 The most divisive point about this spot is likely their reheating method. Like New York Subway on Queen, King Palace opts for the microwave shortcut, a fleet of them lit up, awhirl behind the counter. In addition to the juice I bet they consume, and the unsavoury effects of long-term exposure, they're a minor ear and eyesore for those who dine-in. 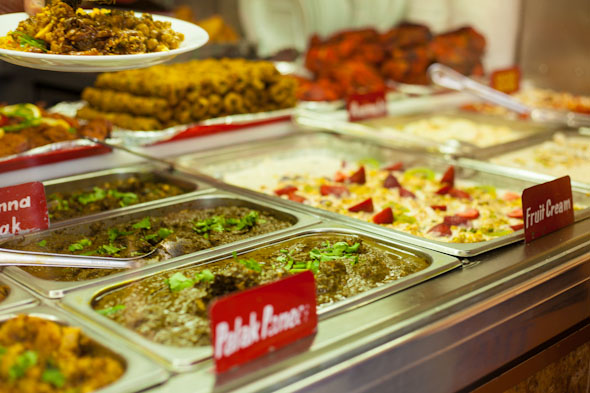 Wish they had an oven in the back for those who don't mind waiting, but to be fair, there were no uneven hot or cool spots in the food which can often be the guilty outcome. Nonetheless, places like Lahore Tikka House , where dishes are made fresh to order and tend to be spicier, win hands down. 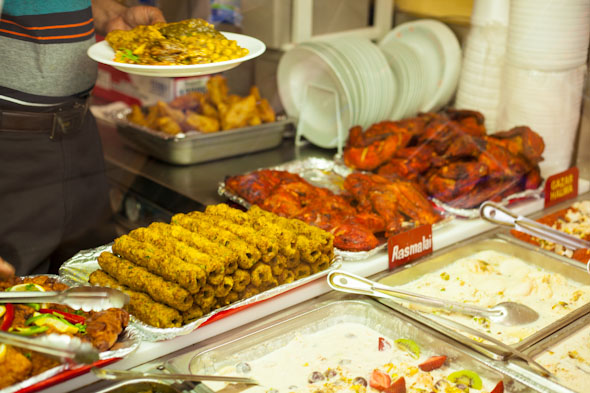 You'll notice the counter is just about evenly divided between meat and vegetarian dishes and it's usually a tough go singling out just one or two mains. Most combos will run you $9 to $12 so it's worth going with friends so you can mix, match, and share. All combos are served with a drink and salad that comes with a refreshingly tangy yogurt-based dressing. 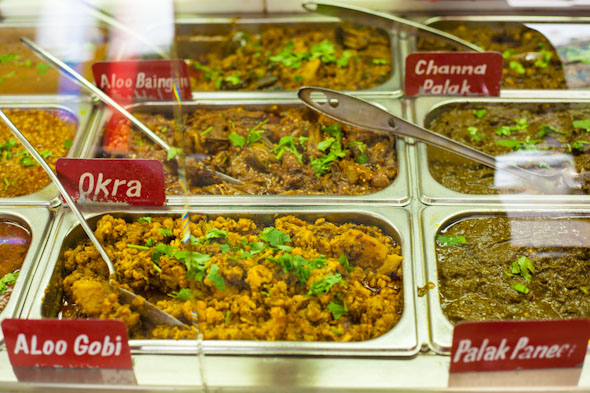 The "black label" route is worth the extra dough, so to speak, for their deliciously soft, slightly toasted, not-too-buttery naan. Word of advice, though: commit to leftovers. Long after I was full, I found myself tearing off more naan to scoop up the saucy remainders. 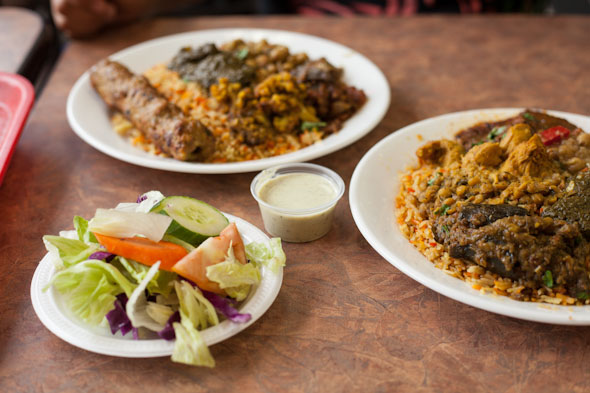 Which brings me to the main attractions. Luckily, I got to sample my fair share from both the meat and veggie camps. The butter chicken was unique in that its creamy sauce was sweeter than most I've had, and though their popular curry ginger chicken packed a nice punch, I found the chicken on the dry side, and did not taste any ginger whatsoever.

Out of all the poultry dishes, the boneless Kashmiri chicken was the most balanced in terms of spices and tenderness, thanks to its puree of garlic, ginger, turmeric, garam masala, and sprigs of coriander. If I were to double up on meat, I'd opt for a chicken kebob as a side. Juicy and sumptuous, the majority of their recipes seem to have achieved the right textures and ratio of spices, and the kebobs were no exception.

The veggies held their own, too. A favourite was the bhindi masala, which is stir-fried okra with tomatoes, onions, and garlic that's sparked with the heat of red chilli and tumeric. The aloo baingan, an eggplant dish was not so distinguished in flavour profile, perhaps because that particular veggie absorbs oil so readily or that it was slightly overcooked.

As well I had come excited to try the palak paneer but unfortunately it had a much softer consistency than I prefer, the recipe otherwise pleasant. For this particular dish, I tend to enjoy indulging in curds of cheese that take on a meatier disposition. However, most vegetarians will be satisfied with their selection.

For instance, the channa masala could not really be faulted, its chickpea mixture quite mild tasting but still a satisfying counterpoint to the other rich flavours. The dal mash lentil dish was similar in this regard, proving that it's not all just comfort food here.

If you've still (somehow) got room leftover to eat, and you're looking to finish on a sweet note, I'd say the fruit cream with fresh strawberries and kiwi is the way to go. 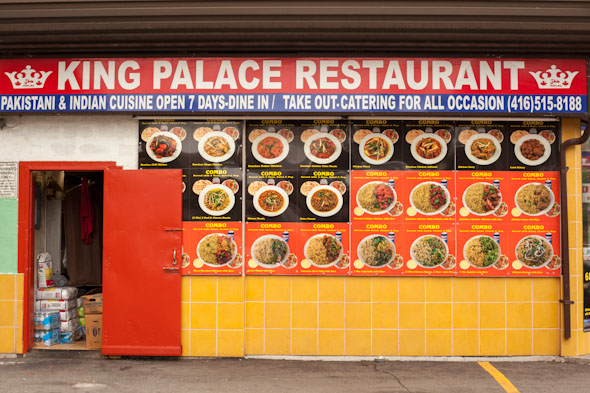