The Kensington Cornerstone is a 100% gluten-free restaurant but you can forget about noticing that, in fact, most people wont. The only indication about it's status comes from a small message at the bottom of the menu reading: this entire menu is gluten-free (and delicious!). If you happened to miss the memo, you would never guess.

With a sizable sun-drenched patio and a refined but relaxed interior, Kensington Cornerstone offers the market a family restaurant with wholesome, fresh market sourced ingredients. The menu features staple dishes like calamari, steak, ceaser salad, pulled pork sandwiches and chicken fingers, along with three kids items for those bringing the wee ones along. 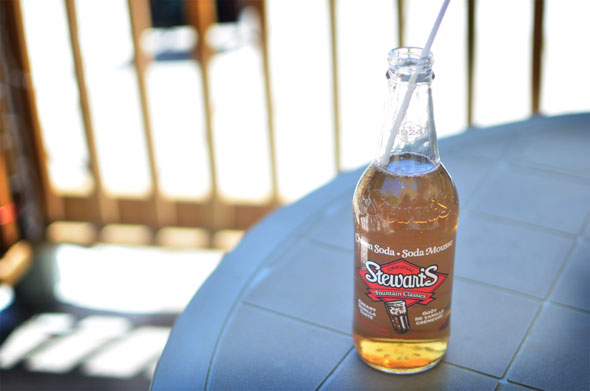 I came in for lunch on my own on a scorching hot day looking for a nice patio to read the paper on. I found a good slice of shade under one of the large umbrellas and quickly ordered a Stewart's Cream Soda ($2.50). If it weren't for the fact that it was noon and I was dining alone, I certainly would have indulged in the $12.99 pitchers of sangria.

I decided to try the mushroom melt ($10) with fries on the side. As I waited, I guzzled up an unhealthy amount of water. The server was happy to come out to keep refilling it while joking that the answer was "probably a number from 1 to 9" as I worked away on my Sudoku. 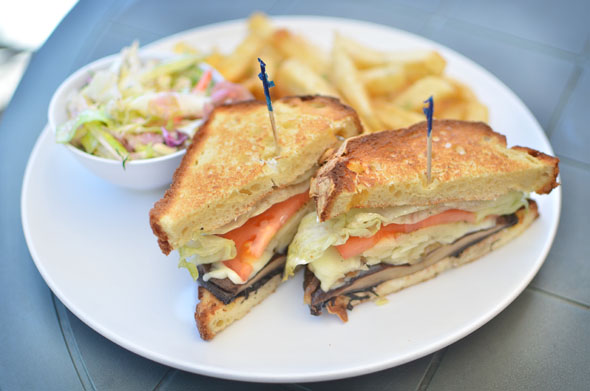 My sandwich was filled with hearty slabs of portobello mushrooms and caramelized onions under a thick slice of melted provolone. The cheese was a little too heavy for my liking, but overall the sandwich was pretty good with nothing about it revealing its gluten-less makings. The bread, sourced from Molly B's bakery , is a perfect combination of flours for a light, white bread and is also available for sale in the restaurant ($9/loaf).

thick sliced variety and darn tasty. The atmosphere on the patio however felt very, uh, 1993, and disjointed from the rest of the market with Boyz II Men style jams coming from the stereo.

The next day, I brought along my friend Allie for some morning brunch. The morning sun was strong and filled the entire patio but luckily the bendable umbrellas allowed us to create some shade. The music, and subsequently the whole atmosphere, had changed dramatically since my last visit with the Ya Ya Ya's replacing the R n B. A bit of employee deejaying going on I suspect.

Allie ordered a decaf drip coffee as did I for the first time in my life-I'm still a little embarrassed.

We both wanted to order the big breakfast platter ($13 - top photo), but I decided to let Allie give it a try while I went for the garden vegetable omelet ($9).

Hash browns are my favourite part of breakfast and I was excited to see diced sweet potato mixed with chunks of seasoned grilled potatoes on both of our plates. Perfectly seasoned and delicious, they were pan fried rather than deep fried so the market fresh potatoes were well highlighted.

Allie's breakfast platter was a combination of hash browns, two eggs, veggies and 3 mini pancakes. The pancakes were the star of the plate. Dusted in cinnamon with real maple syrup on the side, Allie described them as "almost like real cakes". They were easily some of the best pancakes we had both tried, and again, all gluten-free. 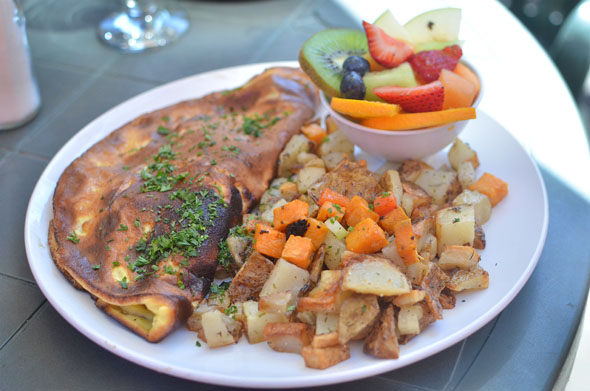 My garden omelet came out a fairly dark from the pan and, being sourced from an Ontario Eco-farm, a deeper yellow than most restaurants. The eggs were folded on top of large slices of zucchini, cauliflower and eggplant. I chose a generous side of fruits, rather than sausage or bacon. 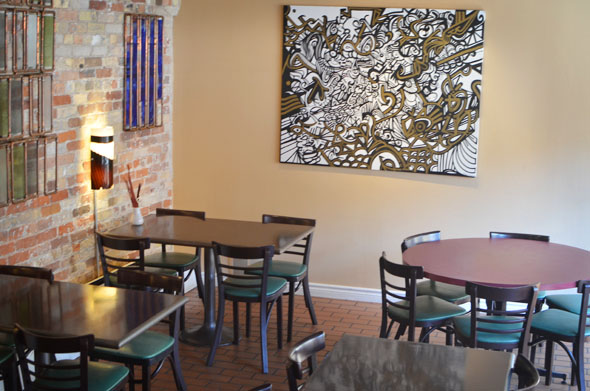 We popped inside to check out the interior before we left and found a small, cozy sofa lounge a couple steps up from the polished and intimate dining room. My two visits were great and I appreciated the calm that resonated in this end of the crowded market. Kenginton Cornerstone is rustic, unpretentious, home style food and quite lovely at that. 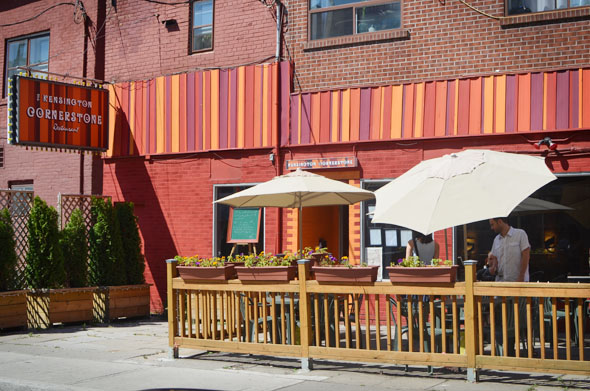